Are you getting your 5 fruit and veg a day? Now there’s an app to check

Most people know they need to eat five portions of fruit and vegetables every day to stay healthy.

But do chips, crisps and strawberry jam count as one of your five a day? Research suggests almost one in 10 Britons mistakenly think they do.

A new free app, developed by experts from Bournemouth University aims to take the confusion out of getting your daily dose of healthy food.

Called SMART-5-A-DAY, the software helps keep track of the amount of fruit and vegetables people eat and how far away they are from getting the amount they need. 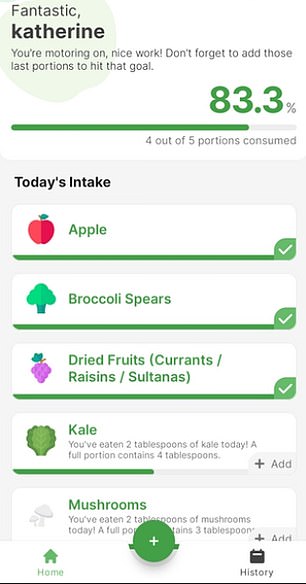 Analysis suggests only a third of adults and only 12 per cent of teenagers in England eat the NHS-backed five fruit and vegetables per day.

Bournemouth’s Professor Katherine Appleton, an expert in psychology and who helped develop the app, said messaging about the five-a-day had been overall very successful.

But she added their research has suggested that people struggle to implement it correctly in their day-to-day lives.

She said: ‘Almost everyone knows they should eat five a day.

‘But when we looked a little further, it was clear that a lot of people did not know what counts towards the target, they did not know what a portion size is, and many did not realise that they needed to eat five different things.

‘Our studies also showed that lower knowledge was associated with lower consumption of fruits and vegetables.’

In a survey before creating the app, the team found 9 per cent of people thought chips and strawberry jam were part of their five a day, while 6 per cent thought crisps were included.

People also struggled to understand portions when it came to smaller fruits like raspberries, getting more than 90 per cent of questions on portion size for these fruits wrong.

This is where SMART-5-A-DAY comes in.

Users input how much of certain fruit and vegetables they are eating per meal or snack and then it calculates how that counts towards filling each of the recommended five per day.

Professor Appleton says they hope the app will have a lasting impact on how people incorporate healthy eating into their diet.

‘What is unique about this app is that as well as tracking daily fruit and vegetable intake, it teaches people about portion size, so they get to the point where they know what they need to eat themselves,’ she said.

‘We think this will be an effective tool to improve people’s diets for the long term, rather than simply for the short period that they use the app.’ 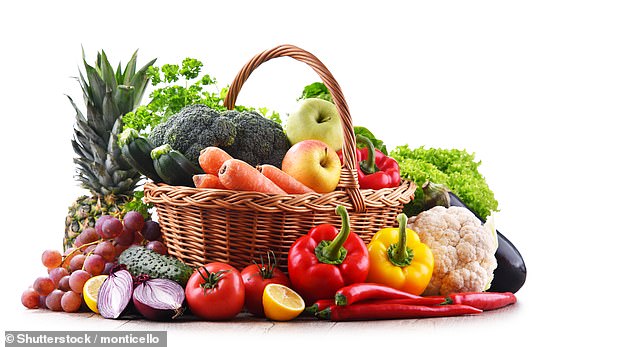 What fruit and vegetables counts for the 5-a-day goal?

According to the NHS the following counts to one of your 5 A Day:

Other foods can also form part of the total five portions but have limits:

And some don’t count at all:

The NHS five-a-day guidance was issued in 2003 based on advice from the World Health Organization that eating 400g of fruit and vegetables per a day helps lower the risk of serious health problems like heart disease, stroke and some cancers.

British adults are advised to consume five different 80g portions of fruit and vegetables each day.

These can include fresh, frozen and dried servings.

However there are some limits. For example, potatoes don’t count at all.

Pulses and beans can only ever account for one portion no matter how much you eat. This rule also applies to juice and smoothies.

Fruit and vegetables are full of the vitamins and minerals necessary for a variety of bodily functions as well as being a good source of fibre, an essential element for good digestive health.

Consumed as part of balanced diet, they are also less likely to cause obesity than other fattier food options.

Obesity is an ever-growing health problem in the UK, with some estimates suggesting the health problems it causes like high blood pressure, type 2 diabetes, and some cancers, cost the health service £6billion every year.

Numerous surveys suggest far too few Britons are including enough healthy foods in their diet.

Other Government estimates vary, with results from a 2019/20 survey of 17,000 for the Department for Digital, Culture, Media and Sport finding 55 per cent of people aged 16-and-over reported eating five portions per day.

NHS data for 2018, the latest the health service has available, found only 28 per cent of adults and 18 per cent of children ate the recommended amount of fruit and vegetables.

SMART 5-A-DAY is available in the Google Play Store for Android phones from today.