Are YOU morbidly curious? Take the quiz that asks if you’d attend an execution

Movies that portray the end of the world or post-apocalyptic scenarios – known as ‘prepper’ films – have helped viewers deal with the coronavirus pandemic, a study claimed last year.

Psychologists found that people who have been watching movies depicting social chaos and the collapse of global order are better prepared for the virus.

Fans of ‘prepper’ genres, including alien-invasion, apocalyptic, and zombie films, exhibited higher levels of resilience and preparedness in experiments.

Those people who had been watching horror films in the last few months also showed greater psychological resilience to the viral pandemic.

The researchers said an exposure to frightening fiction allows audiences to practice coping strategies that can be beneficial in real-world situations.

Viewers ‘learn vicariously’ and are ‘unintentionally rehearing the scenarios’ when watching films like Contagion and 28 Days Later, and TV shows like The Walking Dead.

Cillian Murphy in a scene from 28 Days Later, a zombie apocalypse movie from 2002. Fans of pandemic and other types of disaster films can practice effective coping strategies that can be beneficial in real-world situations

‘Our ability to imaginatively inhabit virtual worlds – worlds of our own making, as well as those conveyed by movies and books – is a gift from natural selection,’ study author Mathias Clasen, a psychologist at Aarhus University in Denmark, told the Guardian.

‘[It’s] a bit of biological machinery that evolved because it gave our ancestors an edge in the struggle for survival.

‘If you’ve watched a lot of what we call prepper movies, you will have vicariously lived through massive social upheavals, states of martial law, people responding in both pro-social and dangerously selfish ways to a sudden catastrophic event.

‘Compared to somebody who has never simulated the end of the world, you’ll be in a better place because you have that vicarious experience.’

The question of why people seek out gruesome and disastrous situations for entertainment has long occupied the minds of philosophers and scientists, the research team say.

It’s previously been speculated that such behaviour may be a form of catharsis or that the arousal generated by frightening stimuli is ‘inherently pleasurable’.

But these experiences can act as simulations of actual experiences from which individuals can gather important and possibly vital information.

Exploring dangerous situations in imagined worlds is also a far safer alternative to exploring these situations in the real world, and biologically they help prep our emergency and ‘fight or flight’ responses.

Specifically, films about pandemics give viewers ‘low-cost access to information that is difficult or dangerous to come across in the real world’. 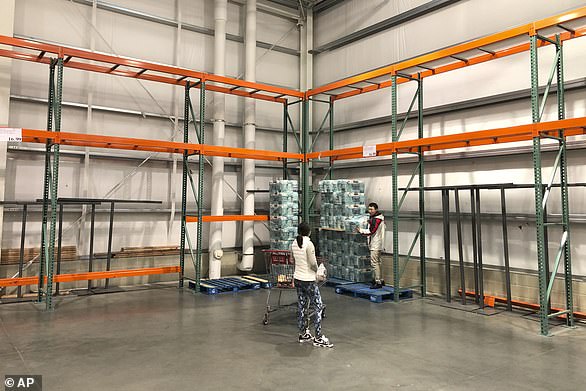 Customers take some of the last paper towels in a Costco store in New Jersey, US, during the pandemic. Pandemic films address possible eventualities of a viral pandemic and whether it ‘triggers cooperative or selfish behaviour in others’ 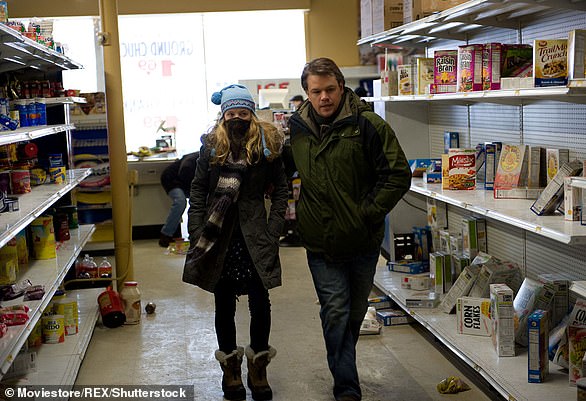 Gwyneth Paltrow and Matt Damon in the 2011 film Contagion. Sights of empty shelves during the coronavirus pandemic appeared to recall scenes from the film

They address matters such as whether the spread of a virus triggers cooperative or selfish behaviour in others – such as the stockpiling of toilet paper and other essentials – or whether institutions will continue to provide services as usual.

Should a pandemic ever occur, this information could be quite valuable, as it could lead to better preparedness and psychological resilience, the researchers hypothesised.

The team used the 2011 film Contagion, which stars Gwyneth Paltrow, Kate Winslet, Matt Damon and Jude Law and depicts the spread of a virus transmitted by respiratory droplets, as an example.

It quickly became one of the most streamed movies in America, presumably due to the fact that it provides ‘a realistic example of what happens during a viral pandemic’, the team say. 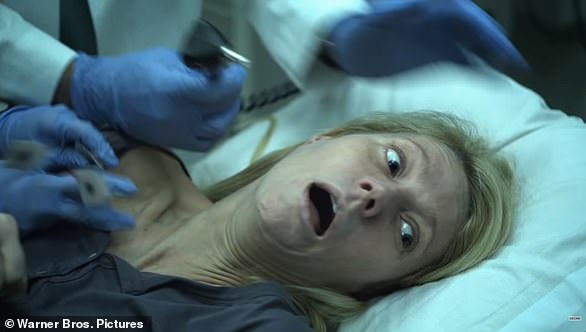 Gwyneth Paltrow starring in 2011 movie Contagion, in which doctors and medical researchers scramble to track a highly contagious, lethal virus as it moves from Hong Kong to the US

In their study, the psychologists questioned 310 people on whether they considered themselves fans of movies and TV shows of 10 genres.

The team also took a measure of psychological resilience – ‘the ability to have subjectively positive experiences during a difficult time’ – and mental and physical preparedness during the pandemic, assessed through questionnaires.

As predicted, fans of prepper genres were more prepared for the pandemic and experienced fewer negative disruptions in their life during the pandemic.

Participants who had never seen a pandemic film felt significantly less prepared for the pandemic than those who had seen several or many, while horror fandom was associated with lower psychological distress. 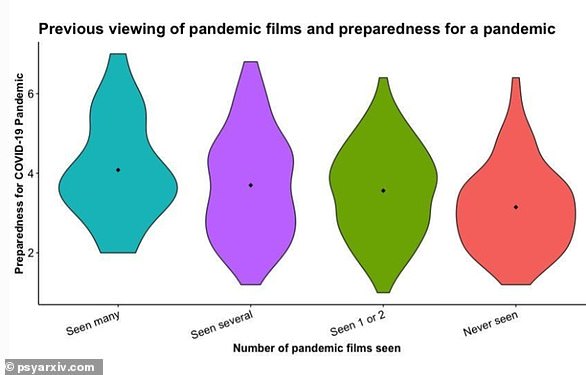 Participants who had never seen a pandemic film felt less prepared for the pandemic than those who had seen several or many pandemic films. Average level of preparedness indicated by the  black spot

Morbid curiosity is typically described as an interest or curiosity about unpleasant things related to death, and was associated with positive resilience and interest in pandemic films, they found.

They also reported more interest than non-morbidly curious individuals in learning specifically about the morbid aspects of the virus, such as seeing photos of what coronavirus does to the body.

The link between morbid curiosity and media preferences are explored further by Coltan Scrivner, a psychologist at the University of Chicago and co-author, in a separate web post.

Scrivner found a greater correlation between morbid curiosity and interest in watching a movie or TV show from the pandemic virus genre in the last few months, compared with other genres such as romance and action.