Are YOU ‘phubbing’ your friends? Staying glued to your phone causes others to feel they don’t belong

Choosing to ignore someone to instead focus on your phone – a practice referred to as ‘phubbing’ – pulls at the threads of people’s basic needs, a new report says.

Researchers at the University of Kent in England have found that this habit can negatively affect people by wearing on their sense of belonging, a trait that makes them human.

For the new report, published in the Journal of Applied Social Psychology, psychologists studied the impact that being phubbed by someone in a one-on-one social setting has on a person.

Phubbing, the practice of ignoring someone who is speaking to you by looking at your phone, can negatively affect people’s self-esteem. With the rise of mobile technology during recent years, the practice has become practically unavoidable (file photo)

All were students who participated in the study to get course credit.

The analysis said that the researchers ‘found that increased phubbing significantly and negatively affected the way the person being phubbed felt about their interaction with the other person’.

The study participants were asked to look at animations featuring two people conversing.

The participants were prompted to think of themselves as one of the two people involved.

The study said: ‘Each participant was assigned to one of three different situations: no phubbing, partial phubbing or extensive phubbing.

‘The results showed that, as the level of phubbing increased, people experienced greater threats to their fundamental needs.

‘They also perceived the communication quality to be poorer, and the relationship to be less satisfying.’ 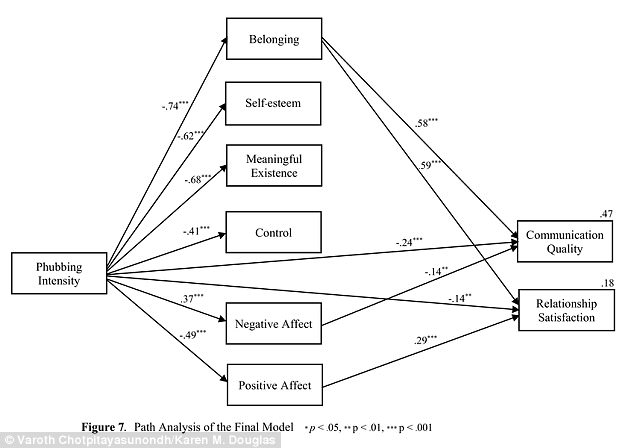 The study results also proved that phubbing affects ‘the need to belong in particular’, and this explained the overarching negative effects the practice has on social interaction.

Phubbing is unique from other forms of societal exclusion in that it can be done anywhere and anytime – all it takes is for a person to reach for their phone and ignore the person talking with them, the researchers noted.

They also pointed out that phubbing has not been studied as extensively as other social exclusion forms.

The report said: ‘As expected, our findings revealed that the experience of phubbing in a controlled dyadic conversation had a negative impact on perceived communication quality and relationship satisfaction.’

The researchers said that what they observed gave credence to concerns over pervasive smartphone usage throughout society.

‘The current research makes an important contribution to the literature on ostracism. It shows that threats to fundamental needs can occur as a result of an everyday communication phenomenon that a significant majority of people report having experienced,’ the analysis said.

The report’s authors said that phubbing has the potential to increasingly threaten people during everyday, routine interactions.

They are calling on more research to study the potentially far-reaching effects of phubbing.

The study’s authors pointed out that the sample used for the research had limitations, noting that it was ‘relatively small and not very diverse’.

‘Future research should address this limitation,’ the report said.