It may not be the worst possible, but Argentina’s start to the Copa America has been nothing short of a nightmare.

Finalists in 2015 and 2016, where they lost to Chile on penalties,  the 14-time champions followed up their disastrous 2-0 defeat by Colombia by picking up a barely-deserved draw against Paraguay on Wednesday night.

Lionel Messi once again proved the saviour, his second-half penalty essentially keeping his country’s hopes alive and saving them from the embarrassment of an early exit. Now they face Qatar on Sunday where the prospect of humiliation is even higher and nothing less than a win will see them progress to the next phase. 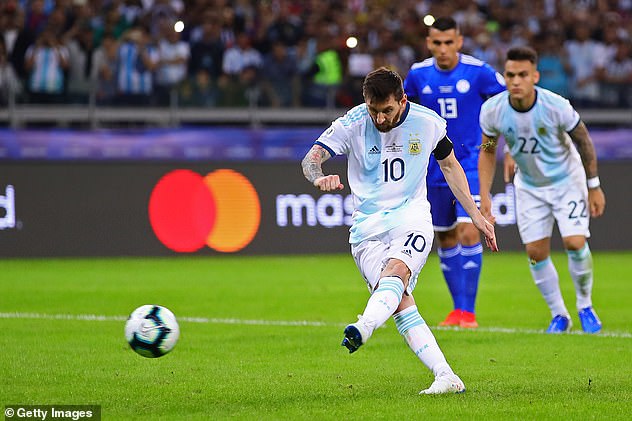 Even then, four points may still not be enough to guarantee them second spot, nor a place in the last eight as one of the best third placed finishers. If it is, a quarter-final showdown with favourites Brazil in Porto Alegre would most likely await them.

Bottom of their group below even Qatar, a showdown with the hosts in their current condition would surely spell a painful exit for Messi and his team-mates – so what has gone wrong?

Naturally, just like it was during the 2018 World Cup where La Albiceleste fell to eventual winners France, the reaction from the Argentine press has been scathing.

While there have been no mock funerals or minute’s silence on television yet, as there were after the humbling 3-0 group-stage loss to Croatia, coach Lionel Scaloni has been on the receiving end of most of the scorn. 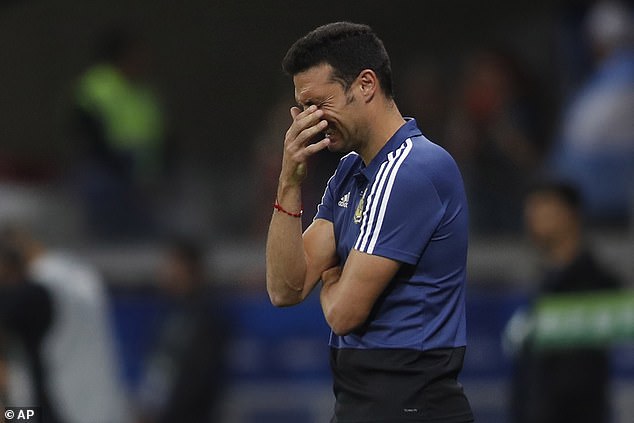 With anything less than victory in the final at the Maracana in Rio on July 7, he is tipped to find himself out of a job in the same manner his predecessor and former boss Jorge Sampaoli was.

Appointed caretaker and then handed the hotseat full time, the manager remarked that Argentina boasted ‘pure dynamite’ after a 5-1 friendly win against Nicaragua almost a fortnight ago.

In the words of local sports daily Ole on Thursday morning however, it has been claimed that Argentina has instead come to the Copa America ‘lacking fire power to subdue and damage its opponents’.

The criticism continued; the national team ‘looks like a firework of bad quality, those sold on the street on the eve of the fiestas, which can explode in your hands when you light them.’ 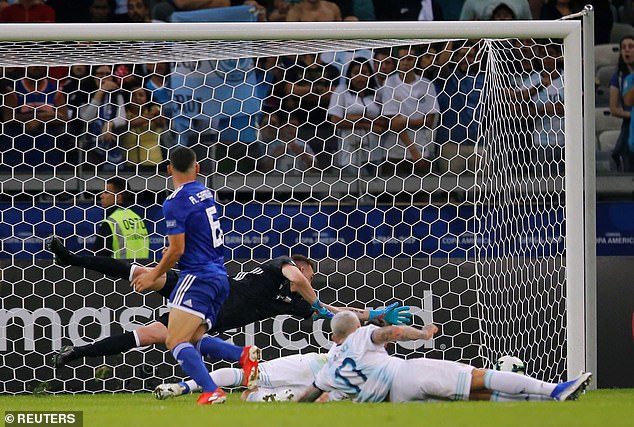 Ahead of their Group B fixture in Belo Horizonte on Thursday, Scaloni made four changes from the opening loss against Colombia. The most notable of them was dropping Sergio Aguero and Angel Di Maria for promising pair Lautaro Martinez of Inter Milan and Udinese’s Rodrigo De Paul.

Despite the nod, Scaloni still managed to infuriate Martinez when bringing him off in the 67th minute for Di Maria, a change heavily blasted by Ole.

‘The coach had no better idea than to take Lautaro off and put Di Maria on, and so we put the game in the freezer,’ wrote Leo Farinella.

‘We stopped the momentum in which it seemed that our opponent was there for the taking,’ the piece added. 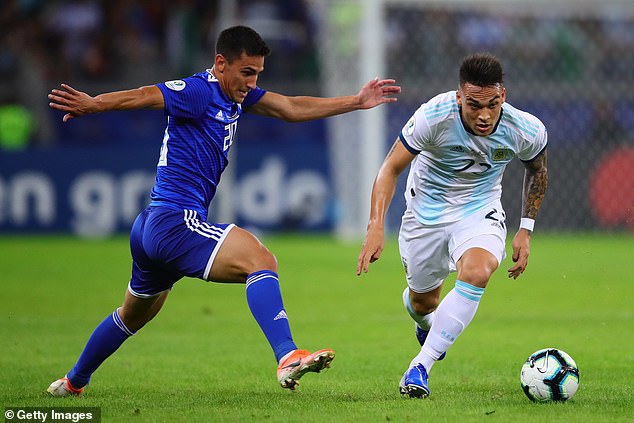 Lautaro Martinez is one of the new generation coming through, but is not happy with the boss

With their article ‘The Club of Enemies’, Ole have suggested that there is a rift between the squad’s veteran players of the Golden Generation and the younger ones coming through, therefore Scaloni bears the brunt as he chooses between them.

Indeed, Messi’s decision to adopt Di Maria’s love heart celebration after his penalty has been read as a tribute to his dropped team-mate, but a thorough investigation into what is troubling the five-times Ballon d’Or winner has also been launched. 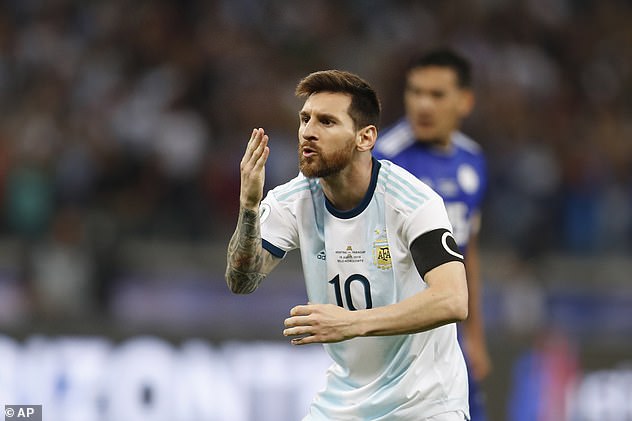 ‘It’s true that on the field he suffers… for Messi, something is wrong,’ penned Sergio Maffei, prior to digging in further.

‘Lionel Messi doesn’t give up like the other times, but he’s no longer decisive,’ quipped national newspaper La Nacion elsewhere.

‘It’s frustrating not to win,’ the player said himself. ‘We played two games and we didn’t get the three points in any of them.

‘It’s unthinkable, because it’s fundamental to be calm [and] now we have not choice but to qualify,’ the Barcelona star concluded.

To do that, though, Argentina must break down a well organised Qatari defence that held the fort until the 86th minute in a 1-0 loss against Colombia.

Argetnina’s own backline, manned by the platinum-haired Nicolas Otamendi and German Pezzella is the disaster it has long been – a worry considering at times the Qataris broke free against Colombia. It is these types of counters that Argentina are prone to succumb to. 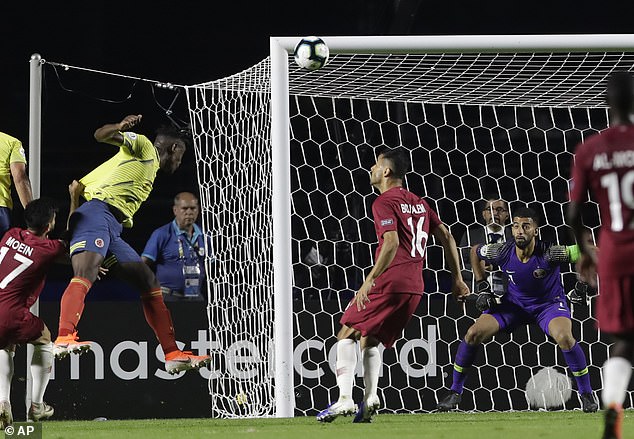 Qatar have looked organised so far in Brazil, losing to Colombia only by virtue of a late header 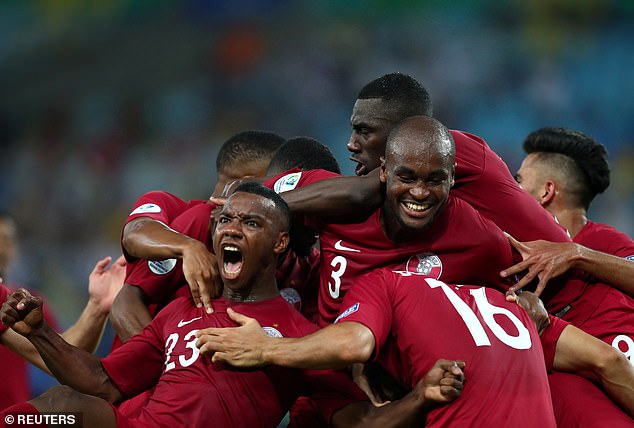 Yet at left back however, the talented Nicolas Tagliafico – who excelled during Ajax’s run to the Champions League semi-final – provides the chance of building up play from the back.

With De Paul on the left wing and midfielder Giovani Lo Celso, some form of passing fluidity would see Messi, alongside either Martinez or Aguero, better served.

Put simply, hitting and hoping will not work against Qatar. Delivery, as well as composure, must be improved.

Scaloni has until Sunday to put things right and avoid disaster.

If he can’t find the right harmony between young and old by then to reverse his country’s fortunes, this could prove his last sip from the poisoned chalice.