An Argentinian footy player has taken a subtle swing at Australia by saying the nation can be ‘nice… sometimes’ after his rugby team had a run-in with Queensland and NSW’s strict Covid borders.

Argentina played the Wallabies in the final match of the Rugby Championship on Saturday losing 32-17 to top off what has been a drama-filled trip for the team.

Six players from the Argentinian side were ruled out of the clash after they crossed the border from the Gold Coast to visit Byron Bay. 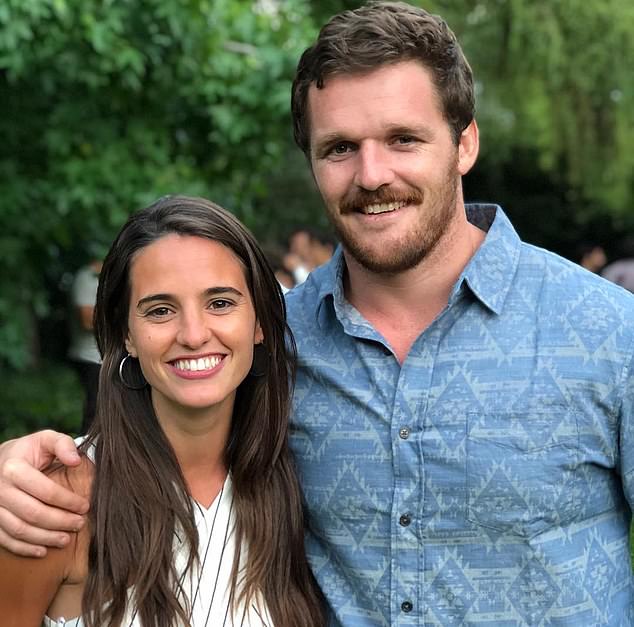 Before the Covid-border woes, the Argentinian captain Julián Montoya (right) had also missed out on a promotional photoshoot for the Rugby Championship due to troubles around scheduling (Montoya pictured with partner Sole Doheijo)

The group tried to re-enter Queensland on Wednesday but were stopped at the border.

NSW’s latest Covid lockdown has snapped shut the border between the state and Queensland, with only those given special permission able to cross either side.

Before the Covid-border woes, the Argentinian captain Julián Montoya had also missed out on a promotional photoshoot for the Rugby Championship due to troubles around scheduling.

In a post-match interview Montoya said: ‘I think Australia is a really nice country and they treat us… well. Sometimes.’

Despite the seemingly salty demeanour, Montoya noted his team were happy to have played in the Rugby Championship, but hope to play a match in their home country soon after all their games in the past two years have been away from home.

‘We love playing for our country so if we need to do this… we do it,’ Montoya added. 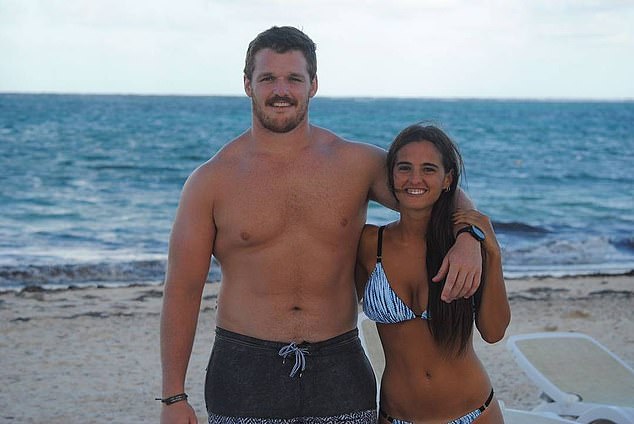 Argentina’s coach Mario Ledesma had also lashed out last week at the tournament’s organisers and said that the team and the staff had felt disrespected during their time in the country.

‘The boys and the staff, we feel really disrespected,’ he said.

‘We’re not asking for much. We are always travelling and we never complain, but we feel sometimes we are getting treated with disrespect.’

SANZAAR, the body which runs Super Rugby and The Rugby Championship, and Rugby Australia released a statement on Monday after Ledesma’s comments to apologise to the team.

‘SANZAAR and Rugby Australia management would like to apologise to Argentina Rugby for the error that led to a photograph being published in the media that misrepresented The Rugby Championship in that it omitted Argentina.’

The joint statement indicated that a ‘communications breakdown’ led to an image being captured of the three attending captains with the trophy.

‘SANZAAR and Rugby Australia take full responsibility for this error and acknowledge that it should not have happened and fully understands Argentina Rugby’s disappointment over this matter after the image appeared in the media.

‘SANZAAR would like to publicly state that no disrespect was intended and indeed would like to thank Argentina Rugby for its unselfish and committed contribution to The Rugby Championship, highlighted by the fact that it has played all matches away from home over the last two years.’ 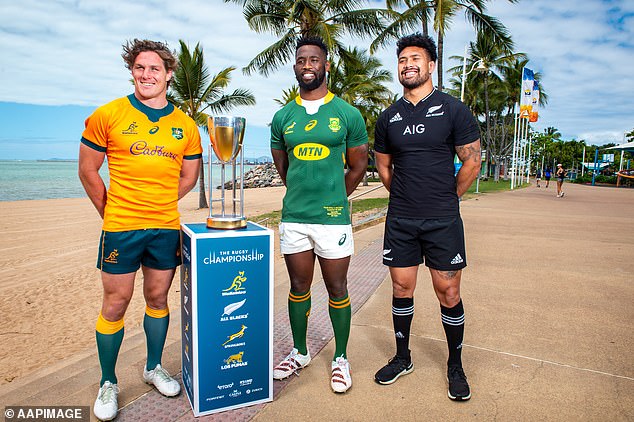