Ariana DeBose looked amazing as she was snapped filming Steven Spielberg’s West Side Story in New York City Sunday, as Spielberg was joined on the set by a fellow Oscar-winning filmmaker in Spike Lee.

The 28-year-old looked every inch her character Anita as she donned a vibrant yellow halterneck dress with ruffles detailed sleeves.

Dressed for the part, the North Carolina native wore her locks in a sleek bob as she shot a high-octane scene on a stoop flanked by two of her co-stars on the set of the period piece. 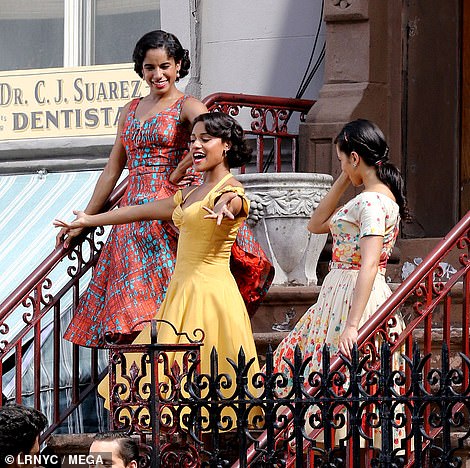 A star is born: Ariana DeBose, 28, looked amazing as she was snapped filming Steven Spielberg’s West Side Story in New York City Sunday

Her co-stars followed the colourful theme as one slipped into a belted blue and red print a-line dress while the other worked a charming floral patterned midi.

The trio were later joined in the scene by Julius Anthony Rubio, who plays Quique, at the bottom of the steps in a maroon T-shirt and yellow T-shirt and dark wash denims.

Smoking on a cigarette during the dance number, he draped a pair of boxing gloves over his shoulder and carried a blue leather bowling bag as he stood alongside David Alvarez, who plays Bernardo.

The 25-year-old soaked up the sun in between scenes in his black vest top and beige trousers, which he accessorised with a silver cross chain.

The BlacKkKlansman film maker smiled as he surveyed the Gotham set of the motion picture before catching up with his pal and West Side Story director Steven Spielberg. 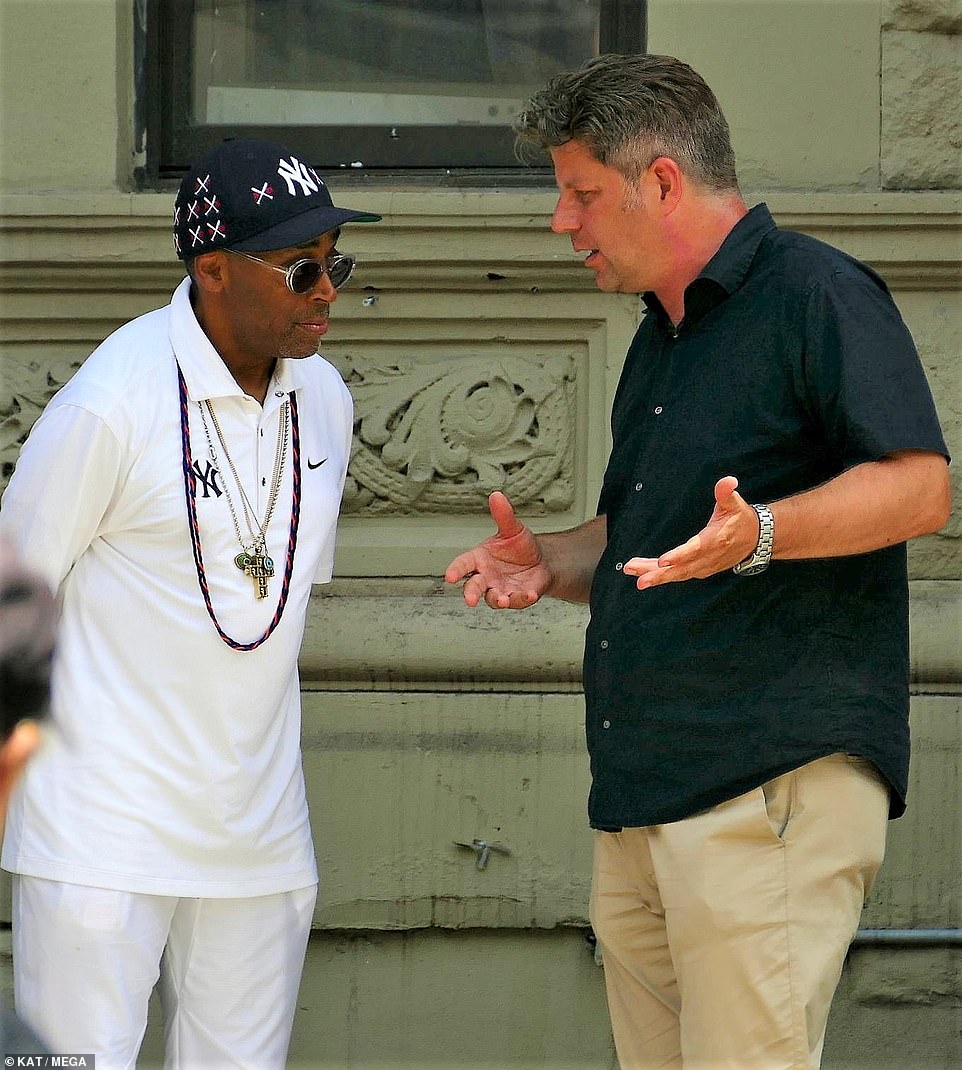 Master of his craft: The veteran filmmaker conversed on the set of the motion picture 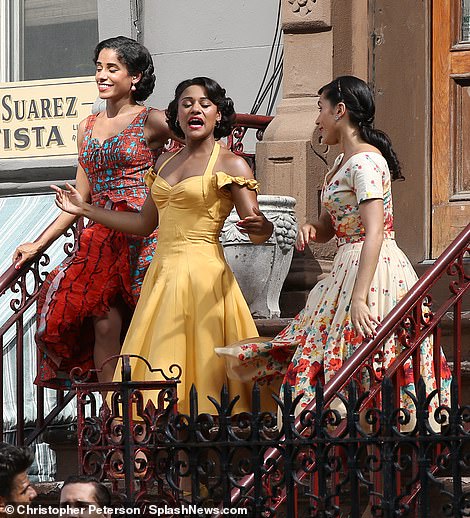 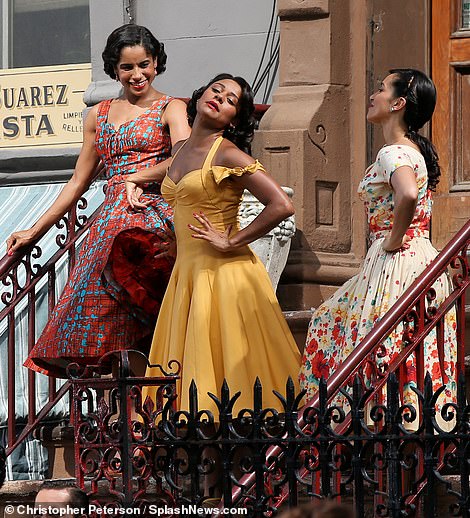 Impressive: Debose has performed in musicals such as Hamilton, Summer: The Donna Summer Musical, A Bronx Tale The Musical and Motown the Musical

Film veteran Steven donned a Hawaiian shirt over a white long-sleeved top with a pair of jeans as he chatted to his pal while the crew set up the next shot.

He was first pictured on Saturday shooting the second film of the 1957 Broadway musical West Side Story.

The show was first adapted into a 1961 movie that became a massive box office smash and won 10 Academy Awards including Best Director and Best Picture.

In on-set snaps from the new version, Mike Faist as Riff was seen leading his New York street gang in their introductory number The Jet Song.

The story was adapted from Romeo And Juliet by Arthur Laurents and features the lyrics by legendary composer Stephen Sondheim and music by Leonard Bernstein.

In place of the Capulet and Montague families, the plot concerns a conflict between rival gangs, the Puerto Rican Sharks and the white Jets. The Romeo character Tony is a member of the Jets, while his Juliet, Maria, is the younger sister of the head of the Sharks.

Ansel Elgort and Rachel Zegler have been cast respectively as Tony and Maria in a cast that includes Broadway veteran Ariana DeBose as the leading lady’s pal Anita.

Mike is also a Great White Way fixture who earned a Tony nomination for his supporting role in the 2016 musical Dear Evan Hansen.

Rita Moreno, who won an Academy Award as Anita in the original 1961 film of West Side Story, has been brought back in a different part for the Spielberg version.

Her new character Valentina is a revamped version of the character Doc from the stage and original screen version, Deadline reported last year.

In the stage version and the 1961 film, Tony works at a drugstore owned by Doc – whose role has been enlarged for that of Valentina.

The famously talented and difficult Jerome Robbins directed and choreographed the original Broadway production, which opened to decent success in the 1950s.

The 1961 movie was co-directed by Robert Wise and Jerome, the latter of whom was brought in to helm the musical numbers but fired during production.

Carol Lawrence, Broadway’s original Maria, told NPR that Jerry Robbins ‘brought this Method-acting technique into the show where he deliberately tried to foment animosity, antagonism, between the two opposing gangs, both on stage and off stage. They weren’t allowed to eat together. They were not supposed to socialize.’

Stephen, who worked with Jerry more than once, described him as ‘very unpleasant, paranoid, suspicious’ to the New York Times in 2000, two years after Jerry’s death.

DeBose took to Instagram on Saturday with a stunning shot of herself in character, writing, ‘Here she is y’all- in all her glowing glory,’ with the hashtags, #FirstLook, #Anita, #puertoriqueña, #boricua and #westsidestory.’

In an Instagram Stories post, she wrote, ‘Thank you for all the love and support yesterday! I know I speak for the entire cast when I say we’re working so hard creating a beautiful story!’

‘Proud to be amongst a group of individuals who celebrate all the different ways of being Latina!’

DeBose is a one-time So You Think You Can Dance contestant who went on to perform in musicals such as Hamilton, Summer: The Donna Summer Musical, A Bronx Tale The Musical and Motown the Musical.

In West Side Story, Ariana plays the role of Anita in the adaptation of the 1961 classic, a role originally portrayed by Rita Moreno that earned her the Best Actress in a Supporting Role the following year. 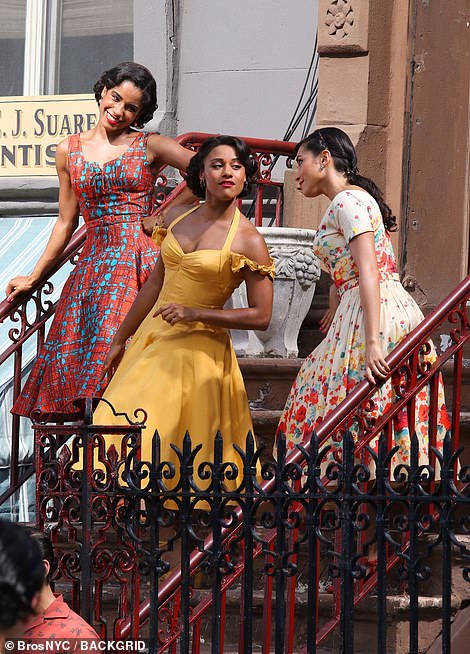 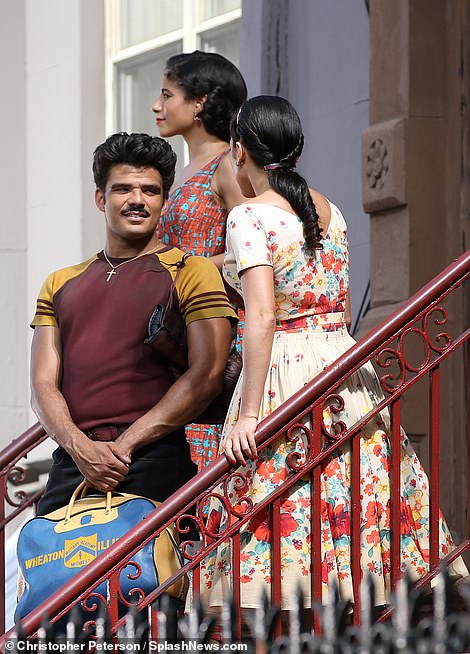 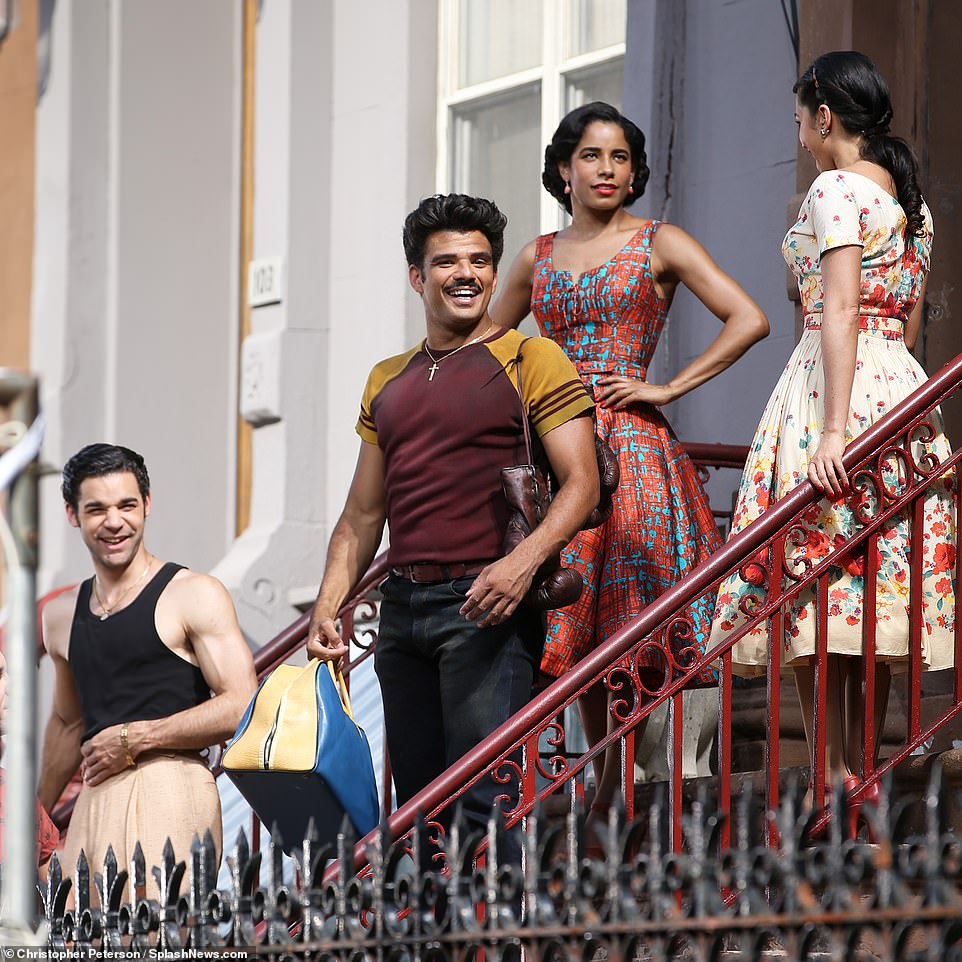 Beaming: The actors were seen in character beaming while filming 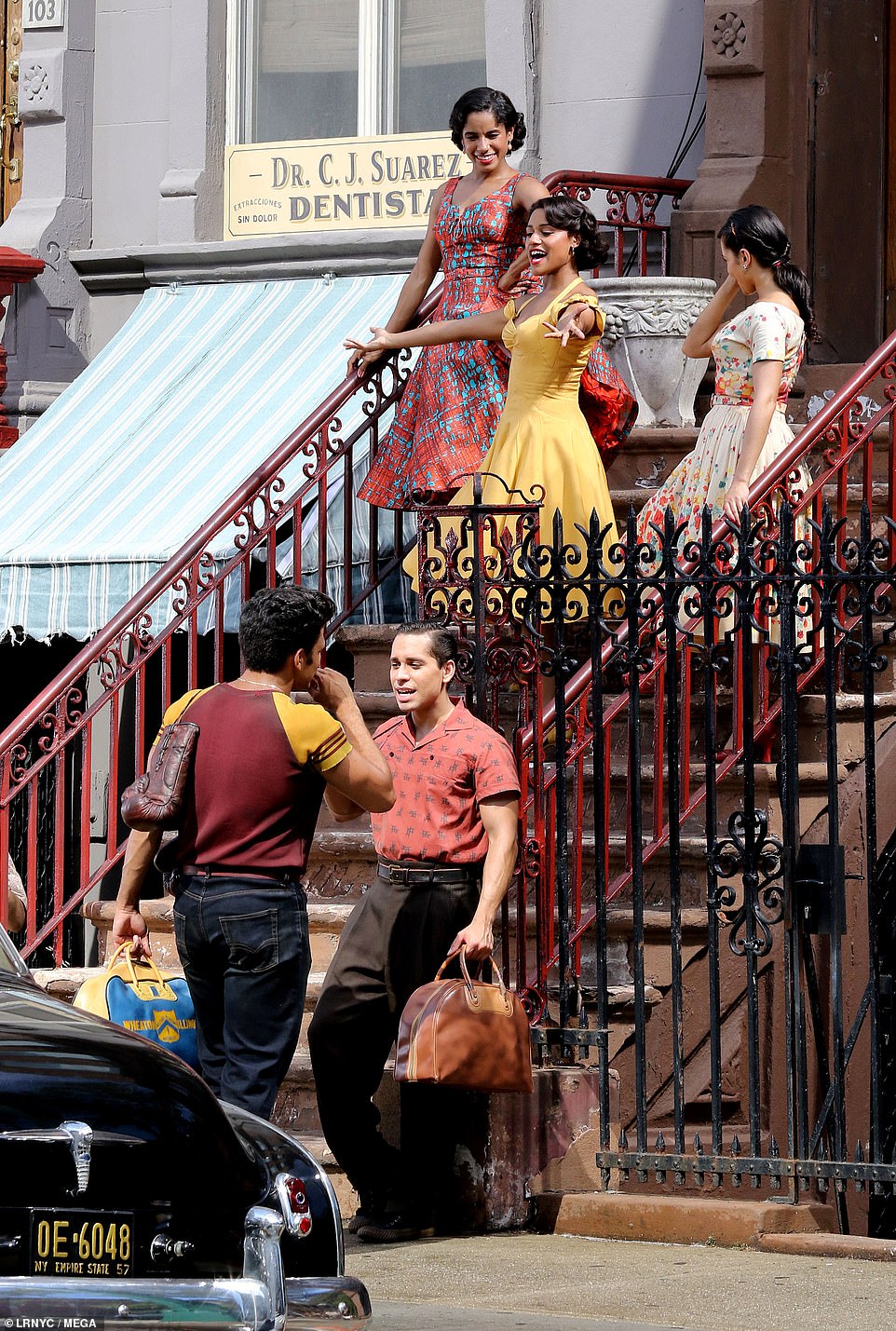 Setting scenes: The cast set up for the high-octane scene 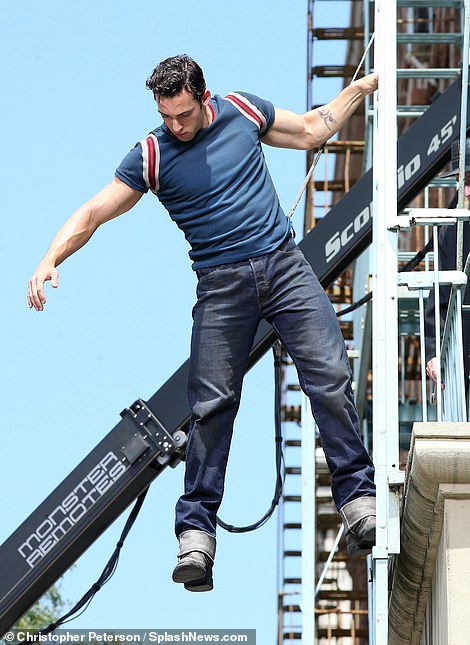 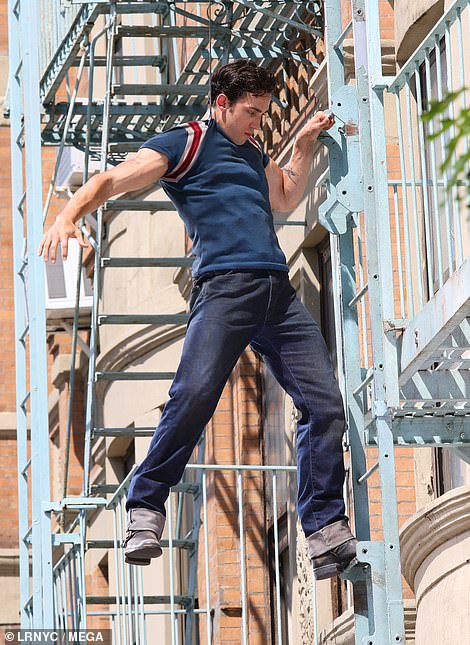 Daring: Actor John Michael Fiumara did his own stunts during filming Sunday

Moreno is both an executive producer on the Spielberg film and in the cast, portraying the role of Valentina.

Other notable names involved with the project from Fox and Disney include screenwriter Tony Kushner, and Tony award-winning choreographer Justin Peck.

West Side Story is slated to arrive in theaters December 18, 2020. 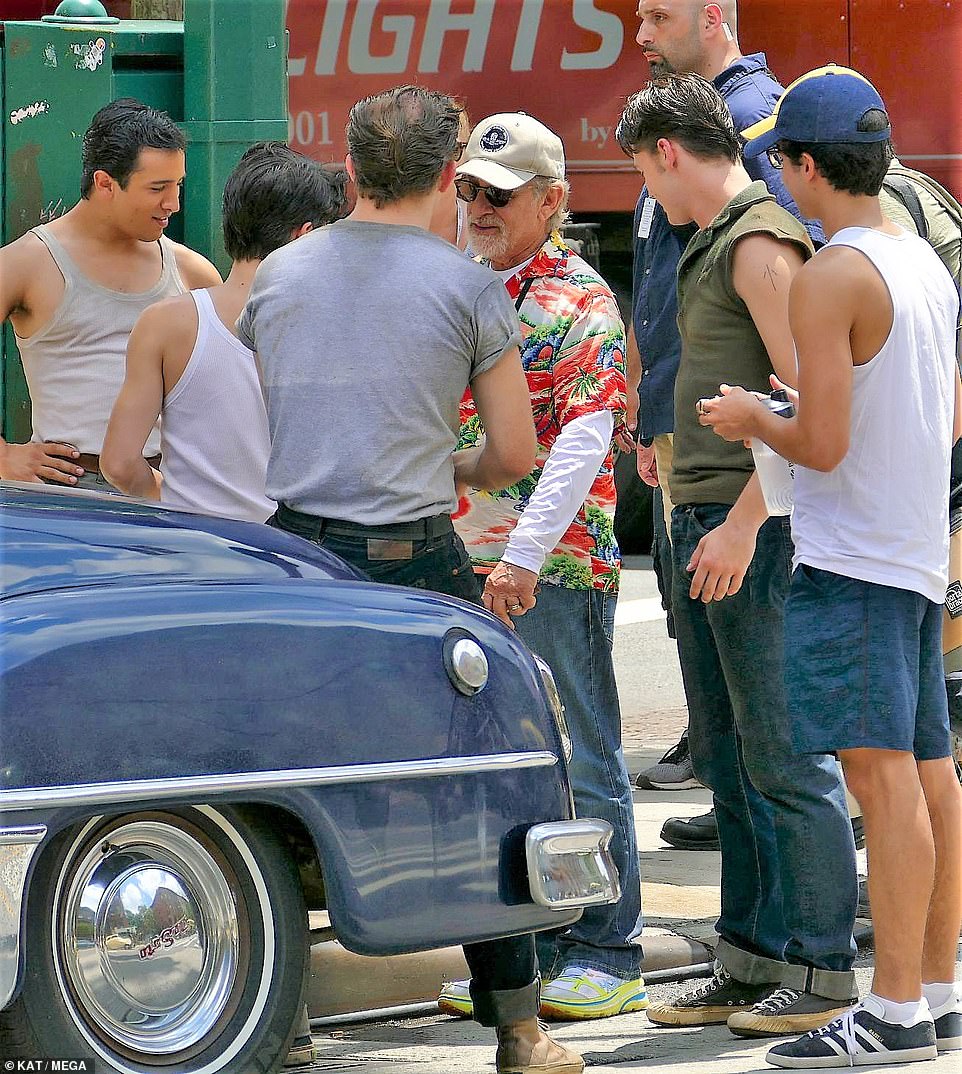 Center-of-attention: Director Steven Spielberg wore a Hawaiian shirt as he gave direction to actors and crew 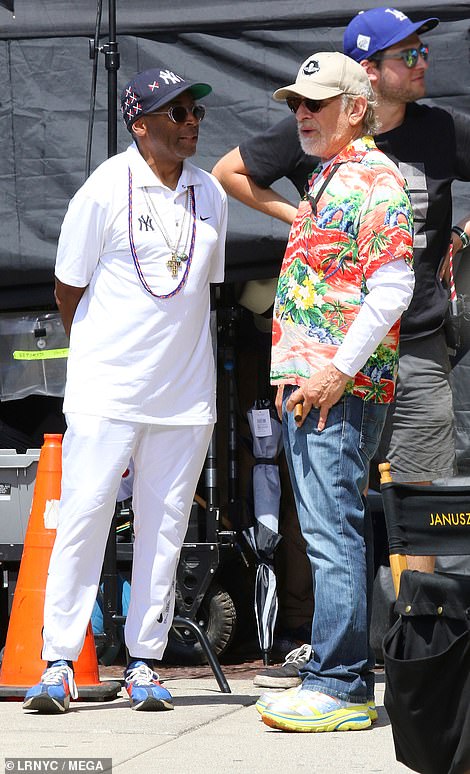 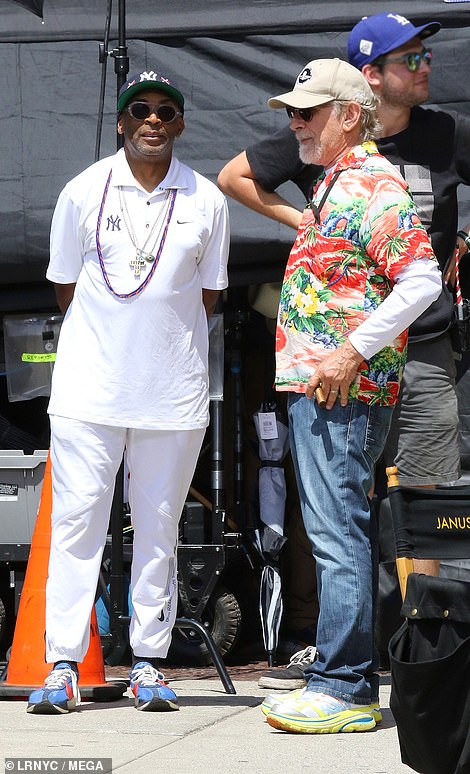 Take five: The two filmmakers chatted as Steven took a break while the next shot was being set up 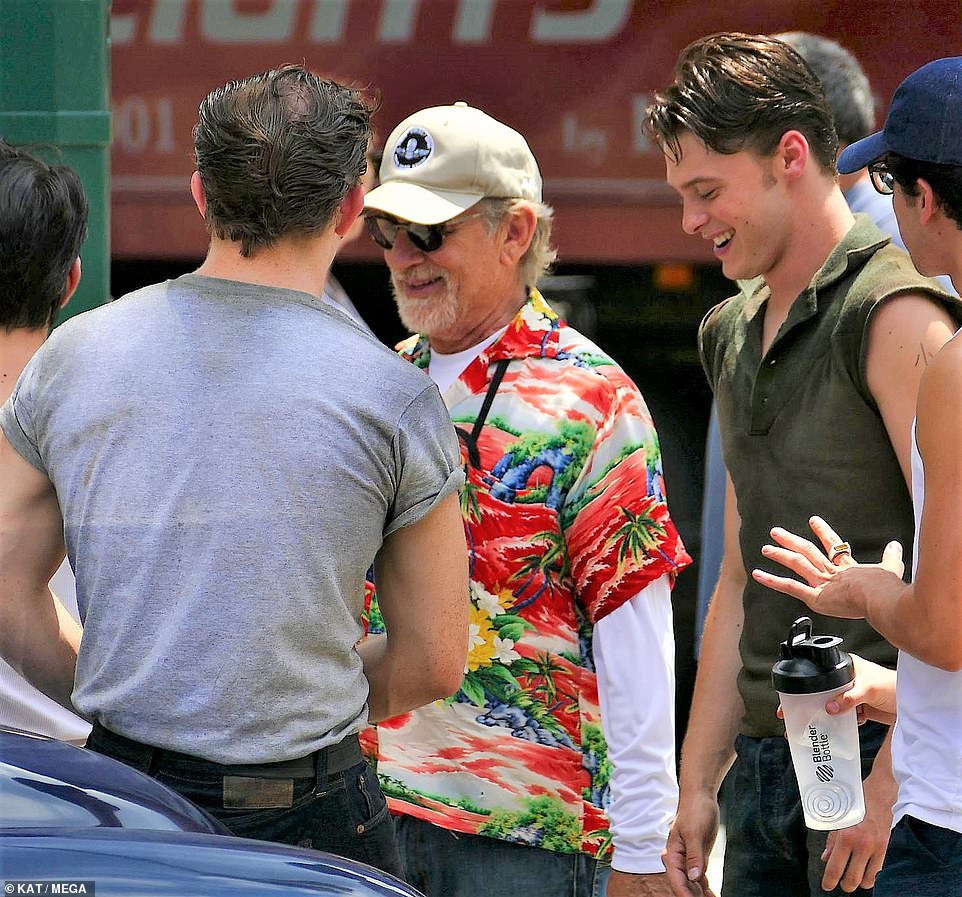 Master of the medium: Spielberg in recent years has directed films such as 2018’s Ready Player One and 2017’s The Post 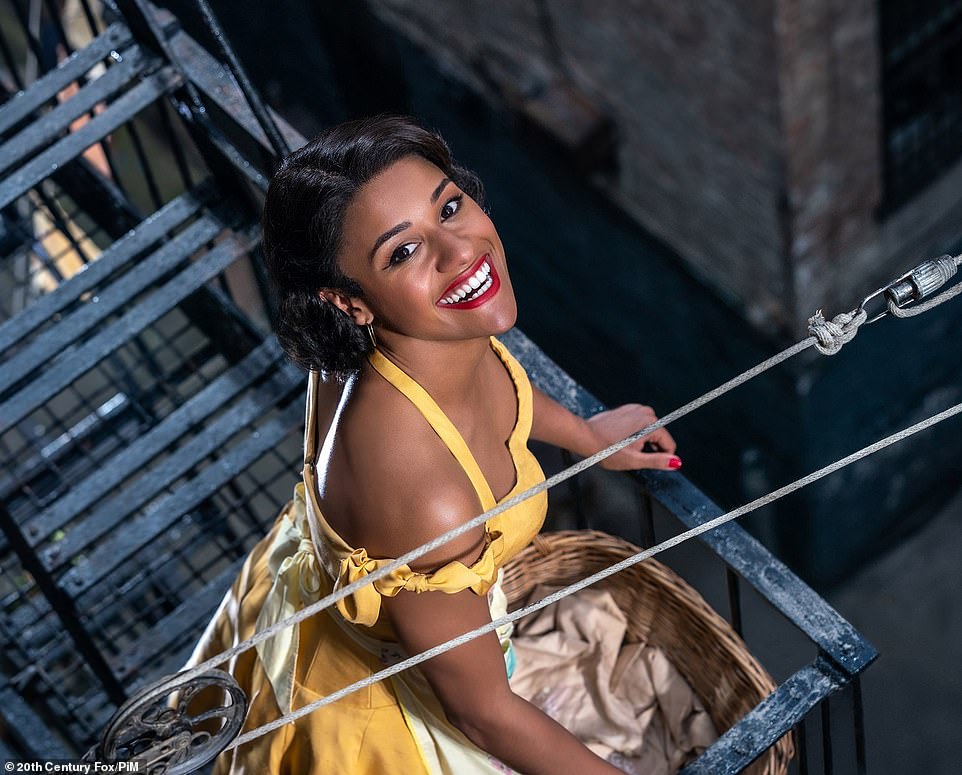 Stunning: DeBose beamed in a previously-released publicity shot from the movie 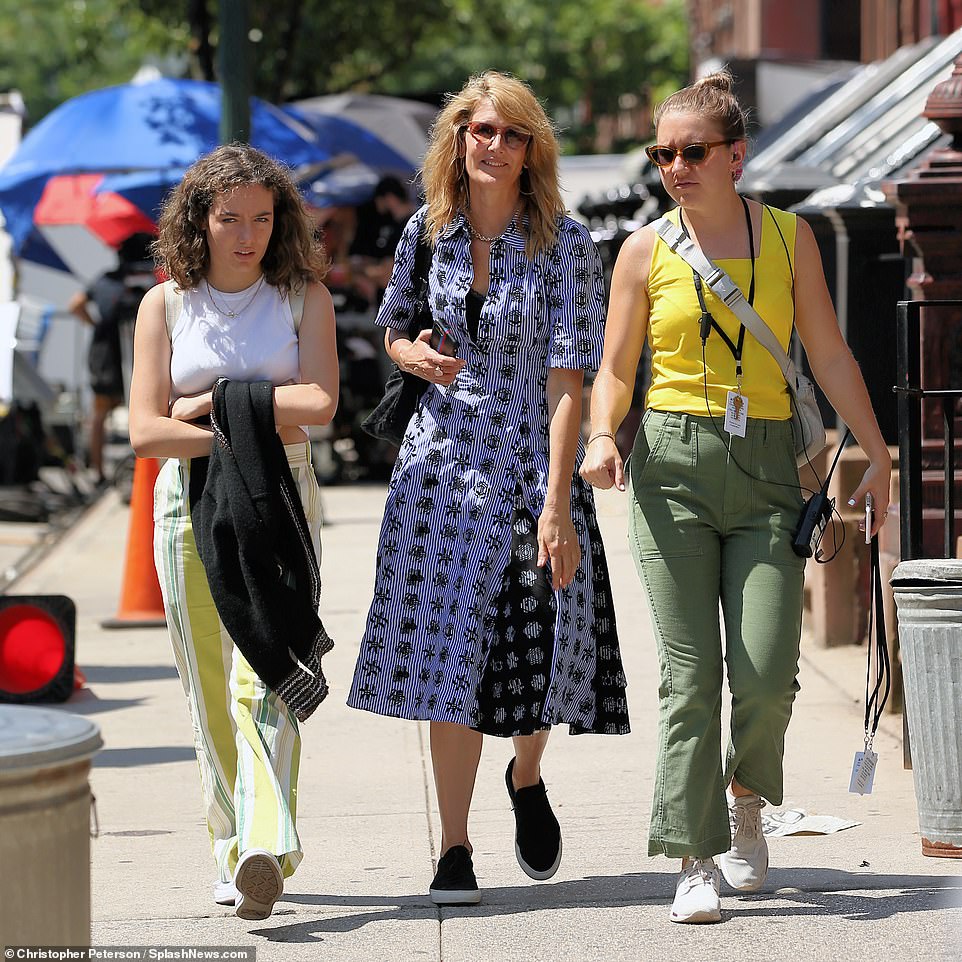 Hey there! Actress Laura Dern also paid a visit to the set of the highly-anticipated movie 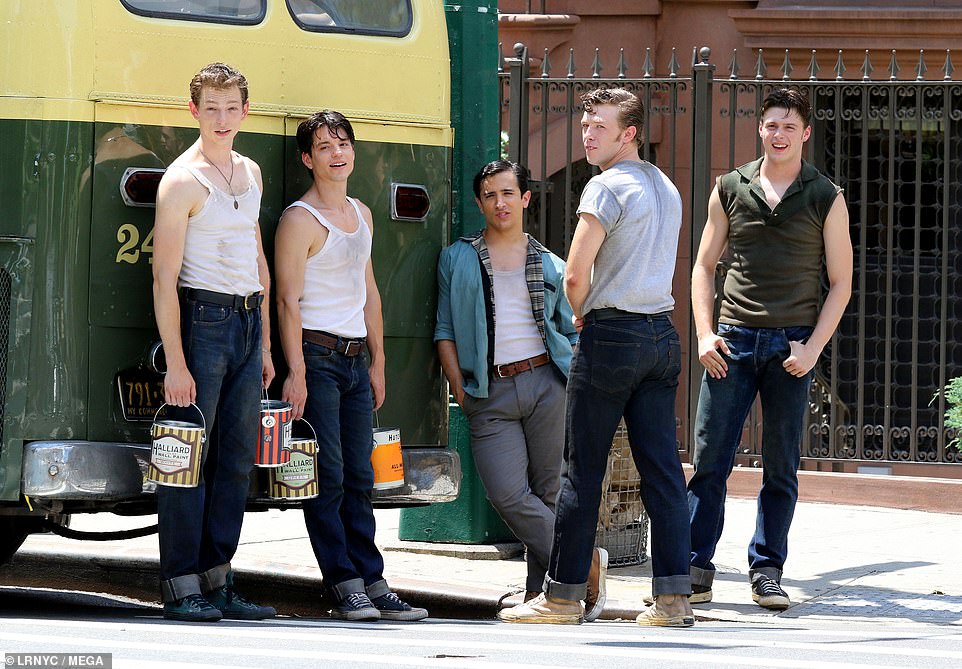 In character: The cast seen filming in the Harlem neighborhood 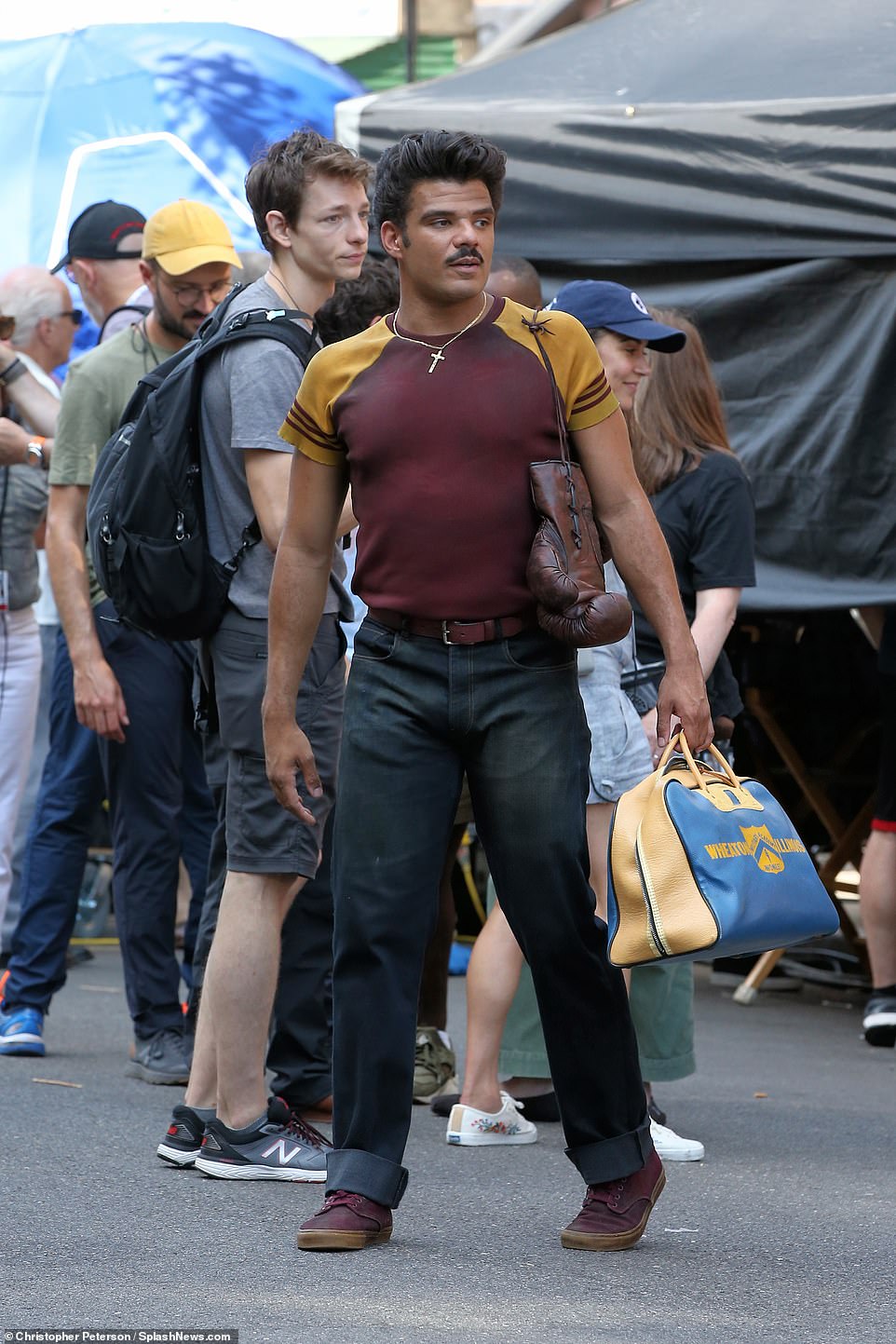