Arizona couple are arrested on child abuse charges after two of their six adopted kids tell police they were beaten, starved and locked in dark spaces whilst naked and zip-tied

An Arizona couple is facing child-abuse charges after two of their six adopted children told police that they were beaten, starved and tortured.

Tammie Brady, 48, and Lee Brady, 57, were arrested on Tuesday over the horrific crimes, which purportedly occurred between 2016 and 2017 in the city of Surprise.

The alleged victims are a nine-year-old boy and a disabled 12-year-old girl who suffers from spina bifida and uses a wheelchair.  According to ABC 15, she requires a catheter and colostomy tube at all times.

The two children had previously been removed from the Bradys in 2016, before they were allowed back into their custody.

The minors were taken away again on October 8 of this year after a witness contacted authorities claiming the children were being abused by their adoptive parents at a national park.

The children were subsequently interviewed by police, during which time they relayed harrowing accounts of abuse. 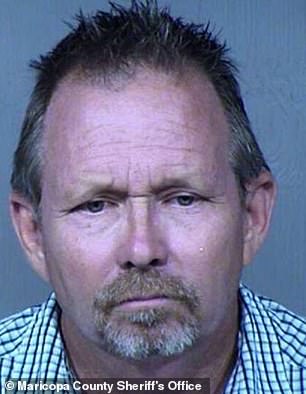 Tammie Brady, 48, and Lee Brady, 57, were arrested on Tuesday and face child abuse charges, after claims they mistreated two of their six adopted children

Whilst speaking with authorities, the 12-year-old girl claimed that Tammie Brady was ‘not treating her right’ and was ‘doing a lot of bad things to her’.

According to the youngster, her adoptive mom would force her to go days without eating and made her change her own colostomy tube.

Tammie Brady also purportedly forced the tween to wash her own clothes in a bucket and wear them whilst wet.

The girl further claimed her adopted mom ‘beat her with a belt’, punched her in the stomach, called her names and forced her into the trunk of a car while she was naked.

‘I thought I was going to die,’ the girl told investigators according to the court documents obtained by AZFamily.com.

Meanwhile, her younger brother also detailed harrowing stories of abuse whilst being questioned by the authorities. 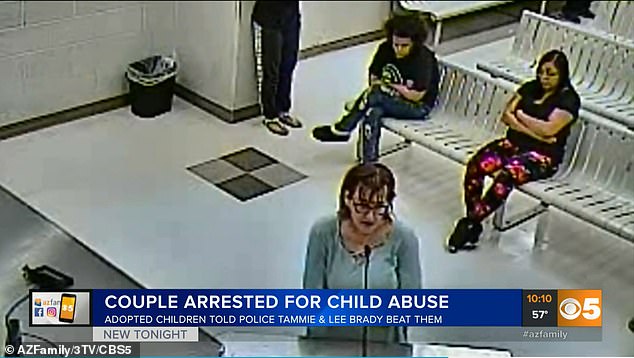 Tammie Brady is pictured in court following her arrest on Tuesday. She is alleged to have performed a litany of abusive acts on her two adopted children

The nine-year-old similarly stated he was starved by Tammie Brady and was locked into a confined space whilst naked.

Tammie Brady is further accused of forcing her adopted son to sleep outside, with the youngster saying he was always ‘so cold’.

‘I don’t want to go back to mommy,’ the boy told police, according to their report.

Detectives then interviewed the other children living with the Brady parents, who reportedly corroborated the claims.

Lee Brady is alleged to have denied knowing about the abuse, but later admitted he zip-locked the boy’s shoes together.

He was arrested on charges of child abuse and child endangerment.

Tammie Brady, meanwhile, has been arrested on charges of child abuse, aggravated assault, endangerment, and kidnapping. 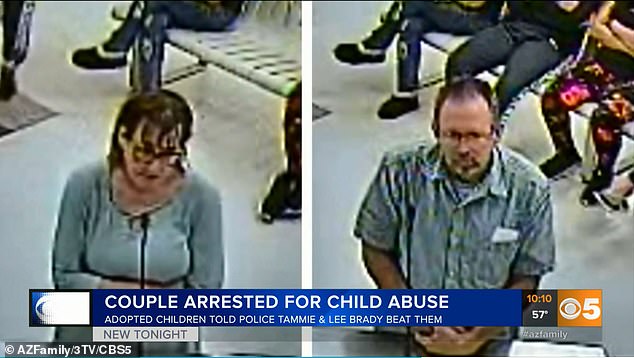 Tammie and Lee Brady both remain behind bars, with a bond set at $30,000 each