Arizona Diamondbacks’ star Starling Mante has revealed his wife Noelia has died of a heart attack.

The outfielder, 31, posted a heartbreaking tribute on social media and said he was living in ‘indescribable pain’.

The couple have sons Starling Jr and Smerling, and daughter Tiana together.

The outfielder, 31, posted a heartbreaking tribute on social media to his wife and said he was living in ‘indescribable pain’

‘Today I go through the great pain of making public the unfortunate death of my wife, Noelia, due to a heart attack,’ Mante wrote.

‘It is a moment of indescribable pain.

‘On behalf of my family, I am grateful for the expressions of esteem and solidarity in this difficult time.’

Accoriding to MLB Network’s Jon Heyman, Noelia was already in hospital waiting for treatment for a broken ankle she had the heart attack, though details have not been confirmed by Marte’s team.

The Dominican baseball supremo Marte played his eight-year big year career with the Pittsburgh Pirates before he was traded to the Diamondbacks in January. 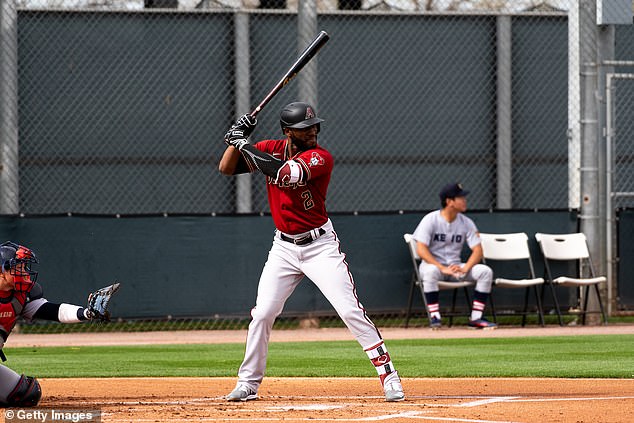 Starling played his eight-year big year career with the Pittsburgh Pirates before he was traded to the Diamondbacks in January. He is pictured above during a B-Squad game at Salt River Fields on March 2, in Arizona

The Diamondbacks shared a tribute on social media and said: ‘We are deeply saddened to learn of the tragic passing’ of Noelia.

They added that: ‘Starling and his family are part of the D-backs’ family and we will do all we can to support him and their children during this incredibly difficult time.’

The Pirates also expressed their sadness at the news and said they ‘extend our deepest condolences to Starling Marte and family during this terrible time.’