Arizona preparing for statewide drill in case of post-quake exodus

Government agencies, businesses and other organizations in Arizona plan to participate in an exercise to practice how the state would respond to a migration of 400,000 people in case of an earthquake.

The exercise will be a drill in case a catastrophic earthquake occurs in Southern California.

The Arizona Department of Emergency and Military Affairs said participants in the National Mass Care Exercise in the coming week will take part in the drill.

They will tackle how to organize operations such as providing food, shelter and medical services.

The department added that the exercise planning has been underway for nearly a year.

The State Emergency Operations Center in Phoenix, along with many county, tribal and municipal emergency operations centers will activate during the exercise.

Margaret Harrington inspects a lantern while shopping for earthquake supplies at Earthquake Supply Center on August 27, 2014 in San Rafael, California 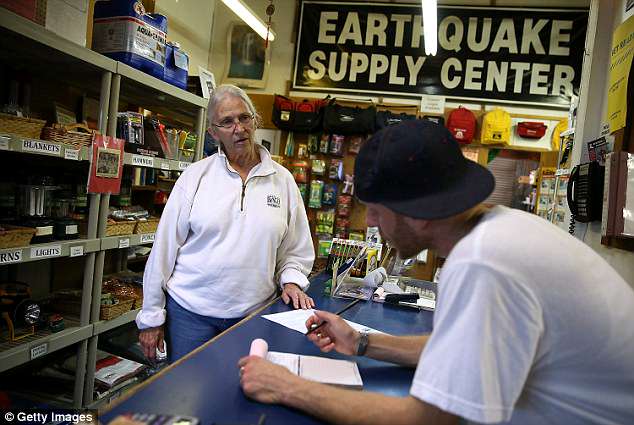 The centers are prepared to test activation procedures and staff training.

A light earthquake was felt widely in Southern California two weeks ago May 8 but there were no reports of damage.

The magnitude 4.5 tremor occurred at 4:49 a.m. beneath the rugged San Bernardino Mountains in the inland region about 100 miles east of Los Angeles and about the same distance north of San Diego.

More than 9,000 people used the U.S. Geological Survey’s citizen reporting website to say they felt it, but the Riverside County Fire Department received no reports of injuries.

The quake occurred 8 miles beneath wilderness north of Cabazon, a lightly populated desert community best known to travelers along Interstate 10 as the location of giant dinosaur statues, a casino resort, outlet stores and giant spinning windmills that turn the gusty winds of San Gorgonio Pass into electricity. 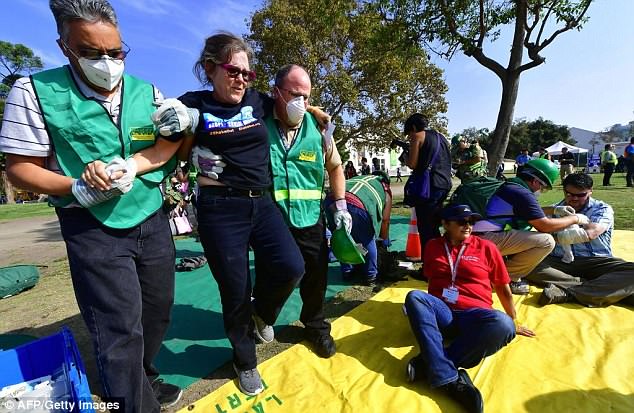 First responders tend to an exercise victim, playing the role of an Earthquake casualty, during the 2017 Great California Shakeout earthquake drill at the Natural History Museum in Los Angeles, California, on October 19, 2017 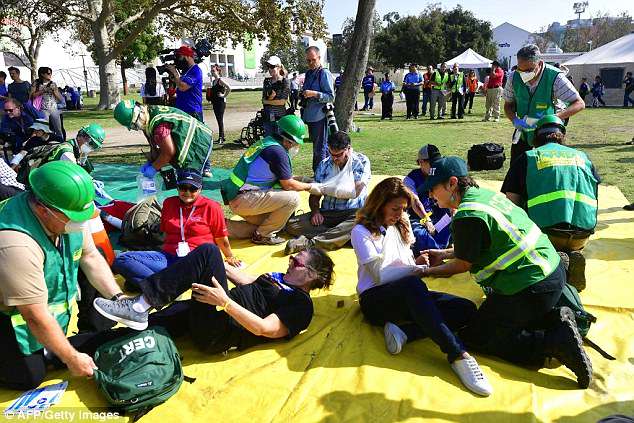 Demonstrations on earthquake preparedness were given during the exercise

‘You heard the shaking before you felt it,’ Cristina Candelaria told KABC-TV in Redlands, about 30 miles west of Cabazon.

Veteran seismologist Lucy Jones tweeted that the quake occurred near a complex part of the San Andreas fault that cannot be clearly seen on the surface there because it is covered by another fault.

She said the movement was mostly that of a thrust fault in which one side moves up over the other side.

The 4.5 quake was followed by a smaller 3.2 aftershock and numerous micro quakes, according to the USGS. 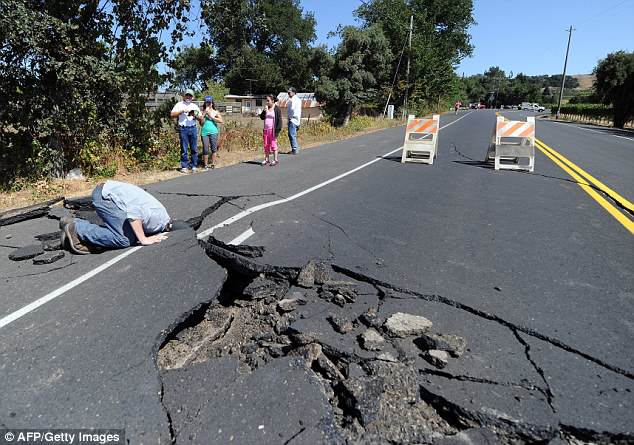 Nicholas George looks under a buckled highway just outside of Napa, California after earthquake struck the area in the early hours of August 24, 2014 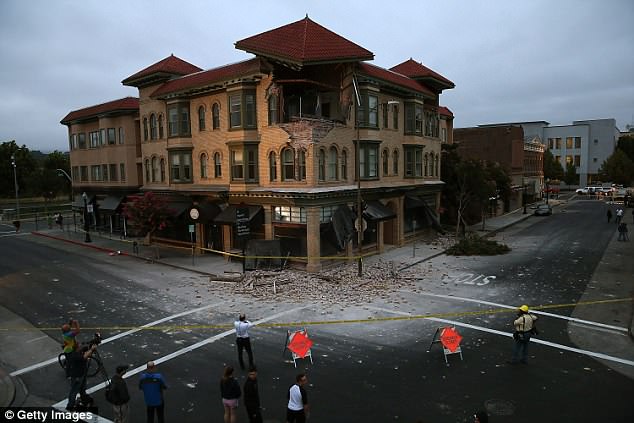 A building is seen destroyed following a reported 6.0 earthquake on August 24, 2014 in Napa, California. A 6.0 earthquake rocked the San Francisco Bay Area shortly after 3:00 am on Sunday morning causing damage to buildings and sending at least 70 people to a hospital