A motorbike riding thug was today found guilty of trying to rob Premier League star Andy Carroll of his £22,000 watch in a dramatic ‘gunpoint’ hold-up.

Jack O’Brien was accused of trying to steal footballer Andy Carroll’s £22,000 watch in a traffic light heist in East London.

The West Ham and England striker, 28, was targeted as he drove his green Jeep Wrangler and was forced to pull a U-turn and then smashed into at least 10 cars during his escape, Basildon Crown Court was told.

Initially Mr Carroll believed the hold-up was a prank by a friend and when the armed robber told him: ‘nice watch’ he thought it was just a compliment so replied ‘thanks’.

But he said one of two motorbike riders then ‘repeatedly pointed at him with a gun, or pretending to have a gun’ and was demanding to have his watch so he fled.

O’Brien, 22, denied attempting to rob the 6ft 4ins millionaire footballer on November 2 2016, and said someone else was using his Suzuki motorcycle that day.

Police said he already used the moped in a string of burglaries and when they raided his house he was hiding under his mattress. 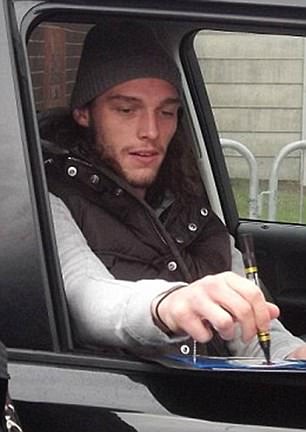 Jack O’Brien (left) was accused of trying to rob Andy Carroll at some traffic lights as he sat in his Jeep (pictured right on another occasion) in a failed attempt to grab his £22,000 watch 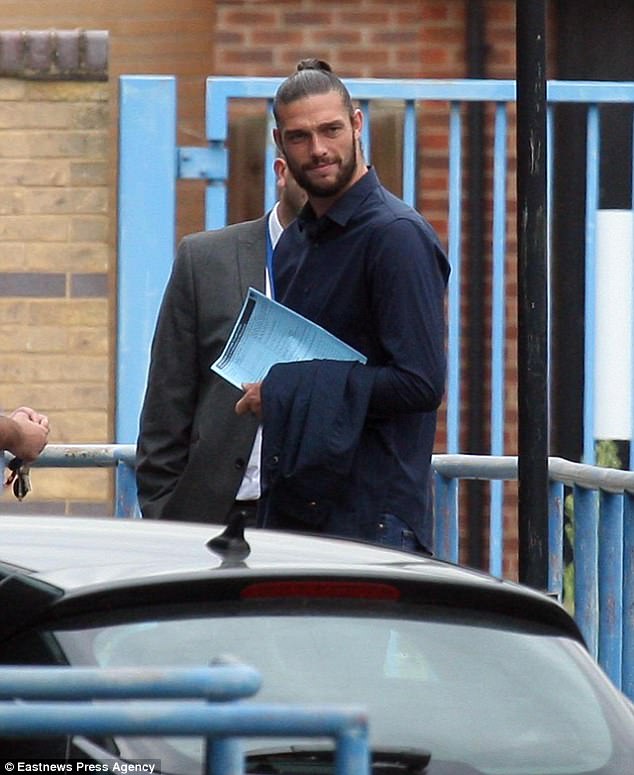 Andy Carroll, pictured outside court  on Tuesday, described how a gun-wielding motorbike rider tried to rob him and he crashed into ten cars trying to escape

Prosecutor Simon Gladwell told Basildon Crown Court: ‘The motorcycle used in the alleged attempted robbery was the same motorcycle that was seized at the time of Jack O’Brien’s arrest’.

He said the rider of the bike used in the alleged attempted robbery wore the same crash helmet and jacket seized at the time of O’Brien’s arrest. 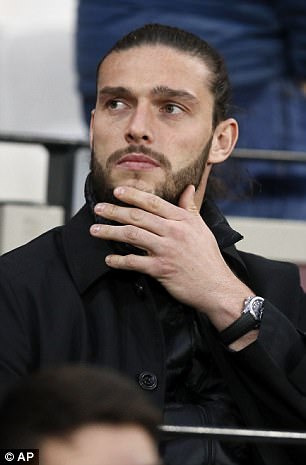 Mr Gladwell then detailed a string of burglaries, to which O’Brien pleaded guilty in April 2017, in which items including jewellery, watches and cash were stolen. The offences happened in October and November 2016.

‘At the time of each of the burglaries Jack O’Brien used the same motorcycle that was used in the attempted robbery of Andy Carroll,’ said Mr Gladwell.

He said that in each of the burglaries O’Brien also used the same crash helmet and jacket worn by the biker in the attempted robbery of Carroll.

Carroll previously told the court he was ‘scared’ when a motorcyclist approached him at traffic lights in Hainault, north-east London, and demanded he hand over his watch as he returned home from West Ham’s training ground.

Initially Mr Carroll thought it was a ‘prank’ and initially thought he recognised the rider as his boxer friend Kevin Mitchell, the court heard this week.

The footballer told O’Brien’s trial: ‘He just said ‘Nice watch’ I said ‘Thanks’ and went to drive away and he said ‘Give me your watch’.

The motorbike rider ‘repeatedly pointed at him with a gun, or pretending to have a gun and demanding to have his watch’, the court heard.

He said in a frantic 999 call played to a jury: ‘There’s two motorbikes, one’s behind me pulling out a gun, I don’t know what to do’ and also told the handler: ‘I’m a Premier League footballer’.

As beeping is heard in the background, Carroll says to the operator: ‘Oh s***, I’ve hit loads of cars, I don’t know what to do, he’s just hit my car.’

He eventually arrives at the West Ham training ground and tells the operator there are security staff there.

‘I’ve probably just hit about 10 cars on the way here,’ he said in the call. 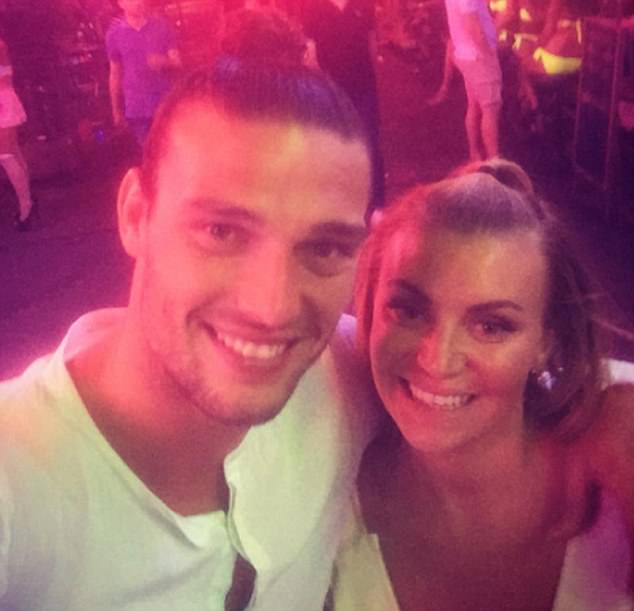 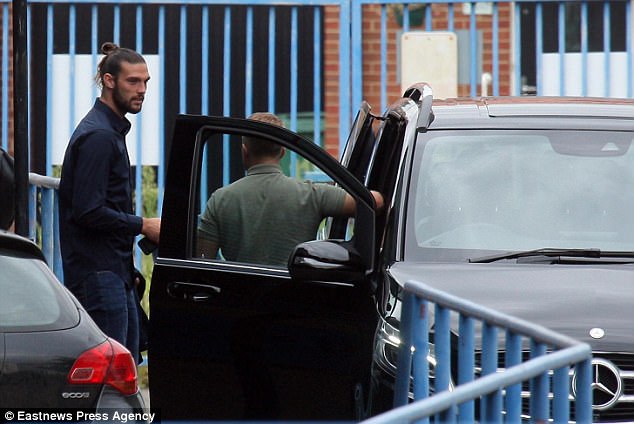 Premier league star called back to give evidence again

Mr Carroll, who had been at training that morning, did a U-turn and successfully drove back to work while calling the police to say he was being chased by armed men

Andy Carroll was whisked from training to give evidence against a man accused of holding him up in an armed robbery.

The lanky West Ham striker appeared via videolink on Wednesday  after being recalled to court on the eve of transfer deadline day.

Police rushed to pick him up and took him to a video link centre after a late request from Jack O’Brien’s defence Michael Edmonds .

Mr Edmonds first thanked him for coming to court and said: “When you had the 10 seconds to view the rider who demanded your watch that the light conditions were good.

Wearing his hair tied back a black T-Shirt and Blue Jeans said: “I don’t remember the sunlight I just remember his face.”

When asked if he remembered police calling him to say O’Brien had been arrested he said: “Not really.”

He also revealed he had deleted his Facebook and Twitter accounts since September and denied anyone sending him O’Brien’s picture, simply answering “no”.

He said: “I have deleted my Facebook and Twitter as I haven’t been on for about eight months.

“I don’t use it anymore since September.”

Explaining what happened Carroll told the jury: ‘I just pulled up at the traffic lights, my window was open, a bike pulled up next to me and said ‘Nice watch’.’

He said he replied ‘Thanks’ and ‘Thought I recognised him’.

‘He had his crash helmet on with his visor up,’ said Carroll. ‘I stared at him for about 10 seconds as I thought I recognised him and thought he was going to have a conversation.’

He continued: ‘I went to drive away and he said ‘Give me your watch’.’

He said to start with he ‘didn’t know if it was a joke’ but, when he did a U-turn, both bikes turned and followed him.

Bearded Carroll, who had his hair in a bun, wore a dark blue shirt, blue jeans and trainers as he gave his evidence.

He used his hands to show jurors how the motorbike rider allegedly gestured for him to surrender his watch, and he also showed a gun gesture.

O’Brien, who wore a white shirt, pink tie and grey trousers, sat beside a female officer in the secure dock, and Carroll avoided his gaze as he gave evidence.

Mr Gladwell said Carroll was ‘beeping at other cars and driving on the wrong side of the road to get away’.

Carroll told the court: ‘I was scared, I didn’t know what to do. I called my partner’s dad, I just panicked. He told me to ring the police.’

In the 999 call Carroll struggles to recognise road names, as the operator reassures him that police are not far away.

At one point he tells the call handler: ‘I’m a Premier League footballer.’

Mr Gladwell said Carroll did a U-turn and eventually managed to get back to the West Ham training ground, but he was pursued by the two motorbikes for some distance.

‘Mr Carroll accelerated away as he was scared, did a U-turn and headed back towards the West Ham training ground,’ he said. ‘He realised the threat was real.’

He continued: ‘Mr Carroll was beeping at other cars and driving on the wrong side of the road to get away, but still the motorbikes were following him.

‘The first bike got in front of him and approached his front passenger door but Mr Carroll managed to find a gap and get away.

‘During part of this incident Mr Carroll called police as he was being pursued.’

Michael Edmonds, defending, said O’Brien, of Romford, east London, was not the biker.

He said O’Brien had used the motorcycle, jacket and helmet for crime before, but that it was not him using the bike on this occasion.