A huge haul of tanks and other military vehicles a disgraced British Army major stashed has been pictured.

Photos show an anti-aircraft gun, a Saladin armoured car and an IKV91 light tank that Michael Whatley had duped foreign governments into sending him.

The former soldier, who served with the Household Cavalry Regiment, was given a suspended prison sentence earlier this month for acquiring 24 vehicles in total.

Whatley tricked authorities in Germany, Belgium and Sweden into giving him the weapons before selling them off and trading them with other collectors.

He fooled a Belgian military museum and the governments of Sweden and Germany into believing they were donating them to the Household Cavalry Museum.

The 65-year-old originally denied any wrongdoing but changed his plea to guilty in July ahead of a scheduled trial in October.

Whatley was branded a ‘disgrace’ by a judge at Salisbury Crown Court, who handed him a two-year prison sentence, suspended for two years, for three counts of misconduct in a public office. 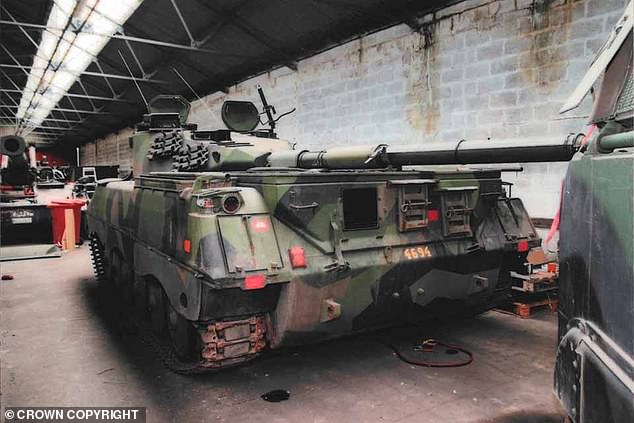 Photos show an anti-aircraft gun, a Saladin armoured car and an IKV91 light tank (pictured) that Michael Whatley had duped foreign governments into sending him

Nicholas Haggan QC, prosecuting, said: ‘It was a long and difficult investigation which revealed [Whatley], over a period of many years, had abused his rank and the trust and responsibility placed in him, to acquire historical vehicles for his own private collection.

‘He did this by falsely claiming to act on behalf of the Household Cavalry Museum… when he was being paid to advance rather than undermine the national interest.

‘He knew very well he couldn’t have got any of these vehicles if he had told the truth about what he was doing.’

He added he corresponded with embassies using Household Cavalry Division-headed notepaper and used military vehicles to transport his fraudulently acquired collection to an Army depot in Ludgershall, Wilts – 80 miles from the Household Cavalry Museum.

Even the use of this was acquired through forgery, as he had signed a lease on the Ministry of Defence building pretending to have the authority of his regiment when he did not. The offences occurred from January 2001 to December 2011. 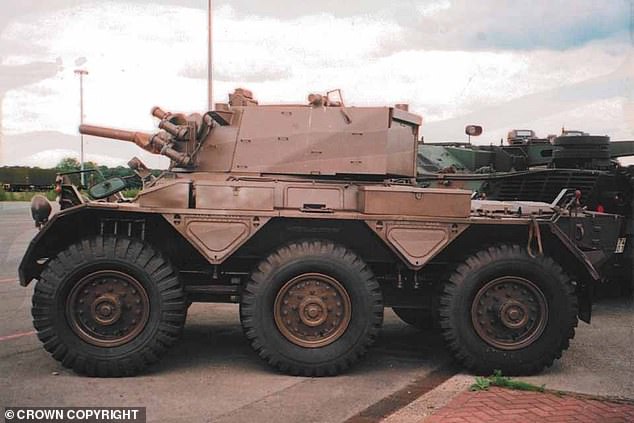 The former soldier, who served with the Household Cavalry Regiment, was given a suspended prison sentence earlier this month for acquiring 24 vehicles in total. Pictured: A Saladin armoured car with 76mm gun

A lengthy and complex investigation into his wrongdoing was prompted after military vehicles were flagged at a port in Marchwood near Southampton in 2011.

Following this, search warrants were executed at Whatley’s home address and the depot in Ludgershall.

Whatley, who left they Army in December 2014 following a 45-year career with the Household Cavalry, had 23 vehicles and scores of weapons delivered to him.

From a military history museum in Belgium, Whatley acquired a Leopard 1A1 tank, a Gepard anti-aircraft gun, an M108 Howitzer tank, an HS20 Troop transport vehicle, an M41 Walker Bulldog tank and a Saladin armoured car among other vehicles including a Bombardier motorbike.

From the government of Germany, he had four T72 tanks, a Leopard Bargepanzer tank and a Marder tank while from Sweden he had armoured infantry vehicles and an IKv91 tank.

The court heard he kept some vehicles in his collection, while others he sold and others he used to ‘sweeten the deal’ in exchange transactions.

Mr Haggan added a ‘large number’ of Household Cavalry Division soldiers and officers were interviewed in the probe and while most had no idea what was happening, some had ‘raised concerns’ and even told him to ‘stop what he was doing’.

When interviewed by police, he denied any wrongdoing and claimed he was authorised to source the vehicles.

Judge Andrew Barnett said he ‘tried to brazen the lie’.

Barrister Tom Wilkins, on behalf of Whatley, said he rose from the rank of private to become Major in ‘one of the most prestigious regiments in the British Army’ and was ‘highly thought of by those who knew him in the Army’. 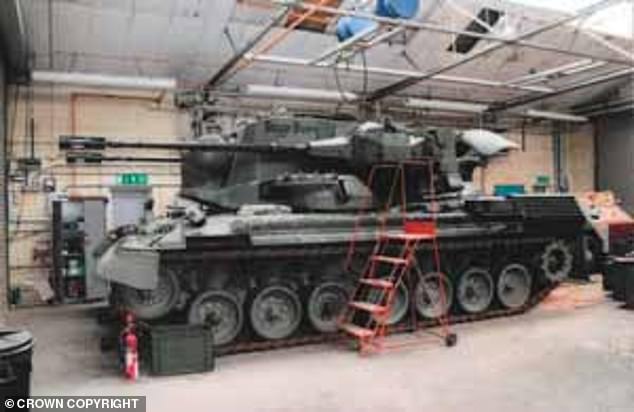 The court heard he kept some vehicles in his collection, while others he sold and others he used to ‘sweeten the deal’ in exchange transactions. Pictured: A Gepard self-propelled anti-aircraft gun with 2x35mm automatic cannons

But the judge told Whatley: ‘You are a disgrace. You were a very distinguished man, a Major in one of the oldest regiments in the British Army.

‘These charges outline your systemic dishonesty and fraudulent behaviour… when time and time again you held yourself out as representing the Household Cavalry Museum and obtained through three different sources… a great number of tanks, armoured cars and other items.

‘All on the pretence that you were entitled to say for them to be shipped over as part of the museum. That was a bare-faced lie and one which you told time and time again.

‘You stand there for the first time in this dock and you should be bitterly ashamed of your conduct.

‘I don’t want to minimise the effect actions such as yours has upon public confidence in the Army.

‘If you misbehave to the extent that you have, you not only damage the reputation of the Army but also a very distinguished cavalry regiment.

‘That is something you will have to live with for the rest of your life.

‘I imagine that you will no longer refer to yourself as Major, you have brought that shame upon yourself entirely through your own conduct, your greed and your criminality.’

The judge handed him a two-year prison sentence, suspended for two years, adding: ‘You may leave this court with your head hanging in shame, knowing that this will be hanging over you for two years.’

Whatley was also ordered to contribute £1,500 towards ‘astronomical’ prosecution costs and given an order to work 150 hours unpaid.

No compensation was ordered but the judge slapped Whatley with a forfeiture of all vehicles and items obtained by him and these may now be repatriated.