Captain Nigel Tyrwhitt Lumley Luttrell Thimbleby has the flu. Not that you’d know it. Within moments of his solid handshake you realise it will take more than a mere ‘lurgy’ (his word) to knock this indefatigable old Army officer off his feet.

‘I was probably the first person in the country to survive thyroid cancer,’ he says. ‘1966. Had to drink radioactive liquid out of a lead pot.’ He chuckles. ‘I think I was too arrogant to be frightened. Oh you’ve started me orf. What I will say is the Army [he served with the 11th Hussars] always looks after their boys and. . .’ His wife Katharine sighs loudly: ‘Just hurry up. We’ll be here all day.’

‘Here’ is Wolveton, a fine Elizabethan manor house which has played host to such figures as Sir Walter Raleigh, Archduke Philip of Austria and King George III and whose previous owners, the Trenchard family, provided the inspiration for the main character in Thomas Hardy’s book The Mayor Of Casterbridge.

Nigel Thimbleby with his wife Katharine outside their home, Wolfeton House, in Charminster

Its illustrious past is now under threat from plans for a 120- home estate in the field next door. Captain and Mrs Thimbleby, along with the villagers in the medieval village of Charminster, are preparing to do battle with the ‘little twerps’ (again the retired captain’s words) from West Dorset District Council.

The former Army officer and his wife are, without doubt, colourfully formidable adversaries. Two years ago they saw off plans to put up six wind turbines. ‘We’ve got three weeks to sharpen our pencils and do battle to oppose this development with vigour. If all else fails I’ve got a gun. I suppose I could always shoot them,’ he says with a merry twinkle in his eye before turning grave.

‘It’s a shambles — a dreadful shambles,’ says Captain Thimbleby, 82, referring to the Government’s relaxation of planning laws that is allowing huge swathes of countryside to be used by developers.

‘The village can’t take it. There isn’t the infrastructure for all the traffic. We’ve been told the estate will mean 600 extra cars a day. Six hundred!’ he thunders. ‘You walk through the village at your peril as it is.

The developers on this plot produced a coloured leaflet, which was the first intimation they were going to put in an application. It said — and you could hear the laughter on the moon I should think — “ample public transport”. You see one bus a day.

‘This countryside is as it has been for centuries. It’s a thing of beauty. What’s happening is . . . ’

He searches for the word. ‘Monstrous.’ Mrs Thimbleby, 70, nods. ‘We need some green and pleasant land to walk on,’ she says.

‘I’m a great walker. Soon it will all be full.’

The proposed development, which is to include 42 affordable homes and a play area, will sit on a rolling hilltop looming over this stunning historic house.

If the redoutable Captain and Mrs Thimbleby lose their battle to stop the works it will be the first time in 400 years that the countryside immortalised in Hardy’s novels will change, which is not just monstrous but immensely sad.

‘Thomas Hardy was very committed to the Dorset countryside. He used to cycle a lot and would undoubtedly have visited here. This is the part of England that inspired him. I have no doubt he would be appalled at what is going on,’ says Captain Thimbleby.

Much, I’m sure, as the many tourists will be who flock to Hardy Country each year to walk through the fields that influenced his writing. Given the combined efforts of, among others, The Thomas Hardy Society and Dorset County Council to make Hardy Country an internationally recognised visitor destination, it seems utterly wrongheaded. 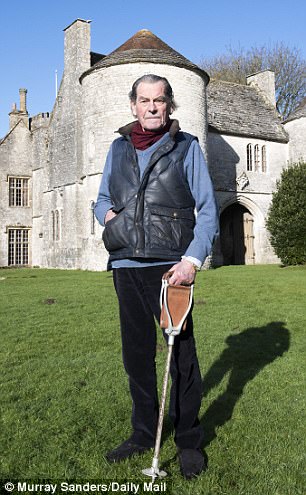 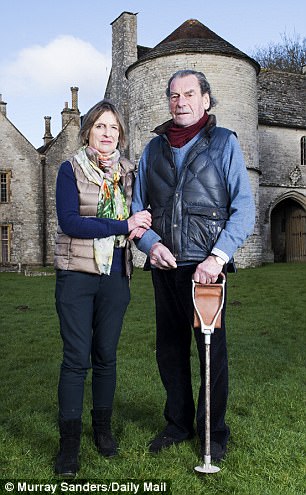 Nigel (left, right with his with Katharine) said he was willing to do battle with the council ‘twerps’ for their plans to build a new 120 modern housing estate next to his home

Like many country lovers who are seeing their villages ruined across the length and breadth of England as the Government incentivises councils to have new homes built, Captain Thimbleby has no truck for local officials.

‘We got marginally involved with the road man from the council a while back. They built a cycle track at the end of the drive on to the main road, which is big enough for a car. The old track, which was cycle width, had a line to stop them going straight across our drive. Very sensible.

‘Anyway, the new one had given priority to bicycles. If you stop your car where they’ve put the new white line you can’t see up the road to see if anybody’s coming. In the end, with great reluctance, they agreed to come and meet us on site. The little twerp they sent out was appalling.

‘We said, “Why don’t you put the white lines where they were before?” He said, “I want to prioritise the cycles to help protect the country’s health”.’

Captain Thimbleby roars with laughter. ‘Can you imagine it? Half a dozen cyclists a day protecting the country’s heal th. It’s completely ridiculous.’

Mrs Thimbleby agrees. ‘We’re not those Not In My Back Yard sort of people. We realise the huge need for housing, but we feel we’ve done our bit.’ Indeed, the population of Charminster has more than doubled from 600 to almost 1,400 in the five decades since Captain and Mrs Thimbleby made Wolveton their home.

Most recently, 70 new homes were built near the village school with a view to adding a further 50.

‘Soon they’ll be no countryside between us and Dorchester. We’re proud of our village and want to keep it separate,’ says Captain Thimbleby. ‘The parish council agreed a plan for development in the village that expressly excluded that field, and I assumed that would be taken into consideration. 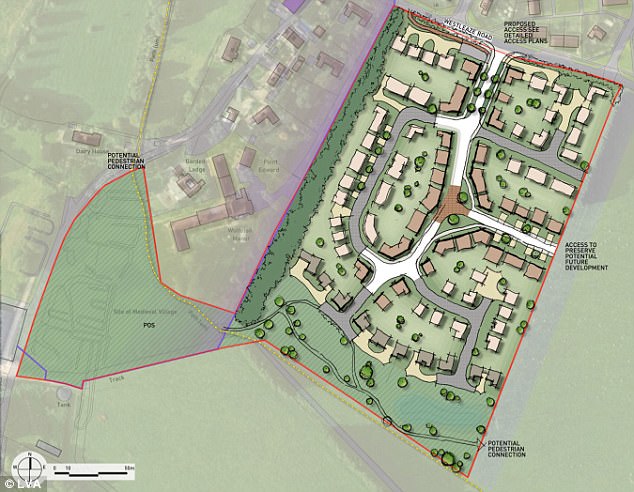 ‘It was a complete waste of time. I shouldn’t have thought the planners even read it. I’m a countryman. I like the countryside. I like the fields. I like country houses. The new people never go for a walk in the fields.

‘I must say, I’m very glad of it.’ The twinkle returns to his eye. ‘I’d have to get my gun out again. They’re not country people.’

Mrs Thimbleby is furiously shaking her head, trying to silence her hilariously outspoken husband, but to no avail. ‘We in the village — the old village — we’ve had more than our fair share of building,’ he continues. ‘Much more. It’s only now that we’re finally starting to fight back because it’s not good planning to build on this particular field.’

Should the council approve the development at a committee meeting in three weeks, it will be nothing short of vandalism. The proposed estate will be a permanent blight upon the Charminster village conservation area and its many listed medieval buildings.

‘This is Thomas Hardy’s “ivied manor house”,’ says Captain Thimbleby of his own Grade Iisted home. ‘Lady Penelope, from one of his short stories, lived here. It’s not even a story. It’s true. She was obviously a bit of a girl who had three boyfriends . . .’ ‘Suitors,’

Mrs Thimbleby corrects. ‘Boyfriends,’ he insists. ‘They were hurling themselves all over the place proposing to her. She said, “no, bugger off the lot of you. I’ll marry you all in due course”. Which she did. She married young Trenchard here, except Hardy changed all the names of course.’

Captain Thimbleby is a distant relative of the Trenchards. In fact, he is a relative of just about every posh family in the country, hence his illustrious collection of names.

‘We came from a one-eyed village up in Lincolnshire and married heiresses. We inherited a bit of property from each one. The custom was if you married an heiress you carried on the name. The best family was called Luttrell. They had the most land. That was in the 16th century. Some generations later we left a daughter so some other bastard got the lot.’

Again, he laughs fit to burst. ‘I saw an article in a colour supplement recently about the resurgence of double-barrelled names but that’s quite different because they’re all pop stars. They’re not marrying heiresses.’

Mrs Thimbeby shakes her head in mock exasperation. You sense the dear captain has led her a merry dance over the years. She is one of five daughters born to the very proper Weld family from the magnificent Lulworth Castle who clearly adores her ‘daft old’ (her words) husband of 46 years.

They met in Dorset shortly after he moved into the gatehouse at Wolveton to recuperate from his cancer and married in 1972. They have three grown-up children. 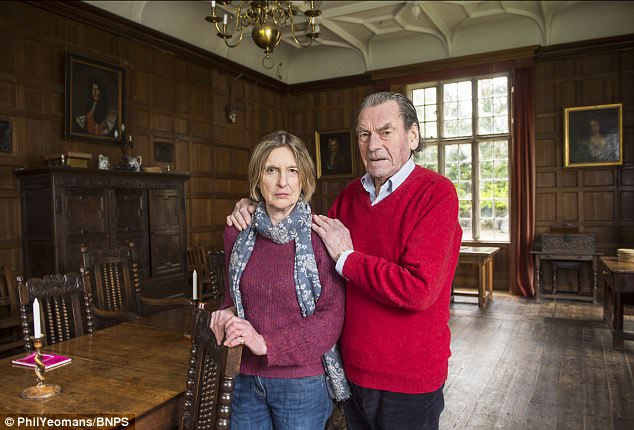 ‘My family had some property in Oxfordshire which I was going to run but my father, lovely man that he was, was also the most hopeless gambler of all time,’ says Captain Thimbleby.

‘I was being trained in running the estate, which was being sold in chunks every month. It was a bit distressing. My wife will shake her head if I tell you this but the only time I saw my mother cry was when my father sold the last farm.’ He wells up.   Mrs Thimbleby doesn’t shake her head.

She says fondly: ‘You’re very emotional in your old age.’

‘Anyway,’ he continues. ‘I went to do my National Service and I enjoyed it so much I stayed on. Those were the happiest days to be a soldier, because we didn’t have many enemies and those we did have didn’t have anything to shoot at us with.’

He served in Germany, Aden and Cyprus before cancer cut short his military career. ‘It was lovely really, the sun was always shining. We had a happy time.’

‘I worked at Christie’s, used to go hunting a bit. Sensible things like that. Shooting, fishing and a lot of lawn mowing when Harry died.’

The captain is a very jolly soul, but as we return to the subject of the proposed development the twinkle in his eye disappears. ‘Life is obviously terribly complicated,’ he says. ‘People need to live somewhere but one reads in the press there are vast, vast acreages of brownfield sites and greenfield sites with planning permission but the builders are just waiting until the price of their houses go up.

‘Life used to be about proper values. Once our countryside is gone, it’s gone and no amount of money can bring it back. What will we have of beauty then to inspire us and feed our souls?’ Wise words which the little twerp from the council would do well to listen to.