The United States Army is looking to extend and toughen its basic training program, citing lacking physical fitness and aptitude towards discipline.

At the U.S. Army’s Global Force Symposium in Alabama on Monday, Army Secretary Mark Esper explained why the troops were looking to increase their efforts.

‘We have every reason to get this right, and far fewer reasons not to,’ he said. ‘That’s why we are considering several initiatives — from a new physical fitness regime to reforming and extending basic training — in order to ensure our young men and women are prepared for the rigors of high-intensity combat.’

Esper would not go into detail to explain what an extended Basic Combat Training (BCT) program would entail.

An idea was proposed that would increase the 10-week program to 12 weeks. The improved BCT would be expected to begin implementation in the early summer of this year.

In addition to a reception, three stages make up the current BCT: the red, white and blue phases.

In the ‘red phase,’ comprised of three weeks, recruits learn basic drills and ceremonies, seven ‘Army Core Values,’ unarmed combat and first aid. They are also given introductions to standard-issue weapons like the M-16 assault rifle.

During the ‘white phase,’ the troops begin target practice and work with grenade launchers and other weapons. Timed obstacle courses are given and soldiers work to participate effectively in teams. 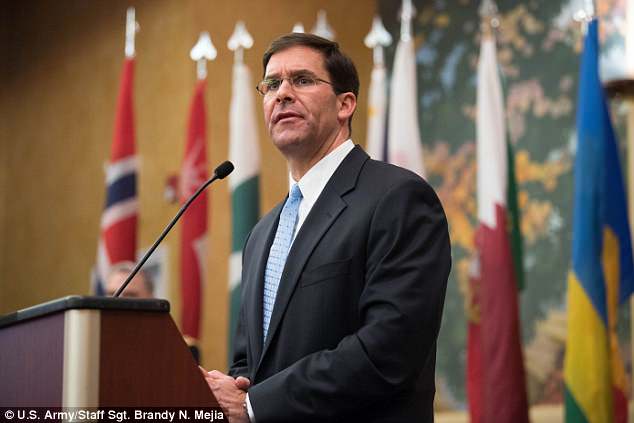 At the U.S. Army’s Global Force Symposium in Alabama on Monday, Army Secretary Mark Esper explained why the troops were looking to increase their efforts

In the ‘blue phase,’ soldiers participate in the Army Physical Fitness Test and do marches equaling to approximately 10 to 15 kilometers.

A focus on discipline and espirit de corps through intense drills and ceremony, inspections and military history training are all ways in which the BCT would be improved, according to Fox News.

Along with those, battlefield skills such as marksmanship, physical fitness, first aid and communication will also be improved.

A more stringent Combat Readiness Test would be implemented as well, extending the three week program for six weeks.

At the AUSA meeting, Esper mentioned that reversing the 2017 military drawdown would help ease the tenseness the military faces in the next decade.

‘To meet the challenges of 2028 and beyond, the total Army must grow,’ Esper said. ‘A decade from now, we need an active component above 500,000 soldiers with associated growth in the Guard and Reserve.’