Arsenal 2-0 Brighton: Nicolas Pepe strikes twice as Mikel Arteta’s men end their season on a high but still miss out on Europe

Arsenal will be without European football for the first time since 1995-96 after a late twist at Leicester.

Mikel Arteta’s men did their bit, beating Brighton 2-0 thanks to a second-half double from Nicolas Pepe.

And for a long time they sat seventh and were on course to salvage something from their disappointing season. 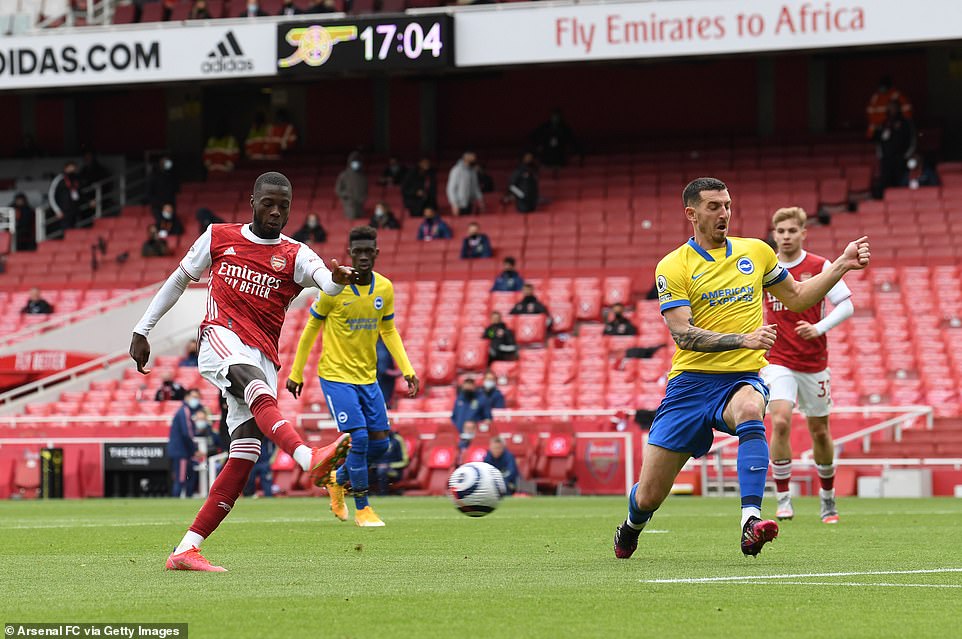 But Tottenham completed a late comeback at the King Power Stadium which ensured they finished above their fierce rivals and nicked a place in the newly-formed Europa Conference League.

It says everything about Arsenal’s decline that a consolation place in Europe’s third tier competition was all they had left to play for on the final day.

Arsenal’s sorry slide is just one of the reasons their finish to the season has been played out against the backdrop of huge supporter unrest and animosity towards owners KSE.

That continued on Sunday, with hundreds gathering outside the ground ahead of kick off and some of the 10,000 inside, again venting their fury towards the Kroenke’s calling for greater fan involvement.

At least this time one of the Kroenke’s was there to see it, director Josh – son of Stan – fronting up and making a rare visit to the Emirates. 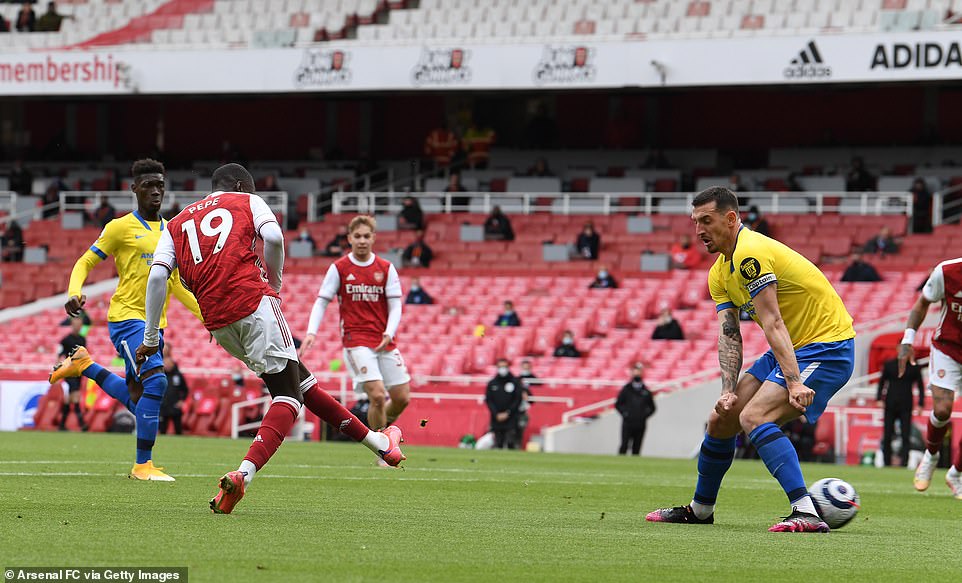 He might have preferred to focus on the contribution of Arsenal’s £72m club record signing Pepe – but there was no getting away from the sentiments of supporters and the winger’s efforts ultimately counted for nothing.

In their final attempt to secure a European place Arsenal got the start they hoped for, elsewhere at least.

Everton and Tottenham, the two sides above them, both trailed inside the opening 20 minutes. Arsenal still needed to score a goal of their own though.

Thomas Partey and Granit Xhaka had a couple of early sighters. Robert Sanchez flipped another long-ranger from Partey over his bar midway through the half though it was a comfortable save, like the opening quarter largely was for Brighton despite Arsenal having the better of the possession and their regular raids forward. 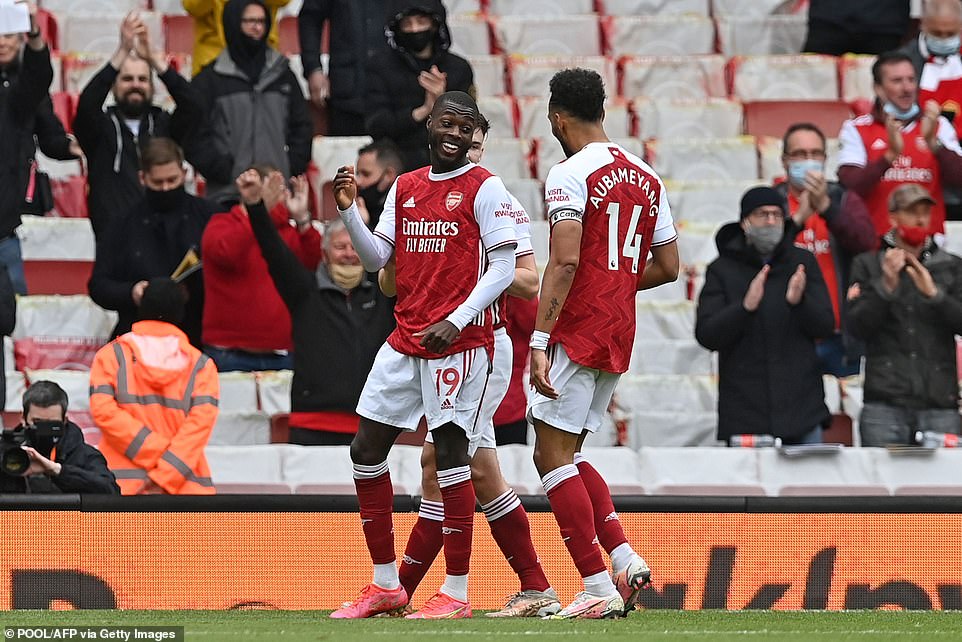 There was a brief moment of panic for Brighton when Rob Holding forced Partey’s flick on from Martin Odegaard’s corner over the line though the eagle-eyed officials spotted the Arsenal defender was offside.

Holding was then back on more normal duties, sliding in to block a goal-bound effort from Jakub Moder at the end of a rare Brighton breakaway.

But Arsenal finished as they had been for most of the half, on the front foot, with Gabriel heading Xhaka’s floated cross onto the bar.

At half time, a top seven finish remained on for Arsenal though Mikel Arteta provided an indication of the rising tension just a minute into the second half.

When Emile Smith Rowe was denied a free-kick seconds before half-time Brighton sub Aaron Connolly did get on Arteta erupted on the sidelines, his dissent getting him a talking to from referee Jon Moss. 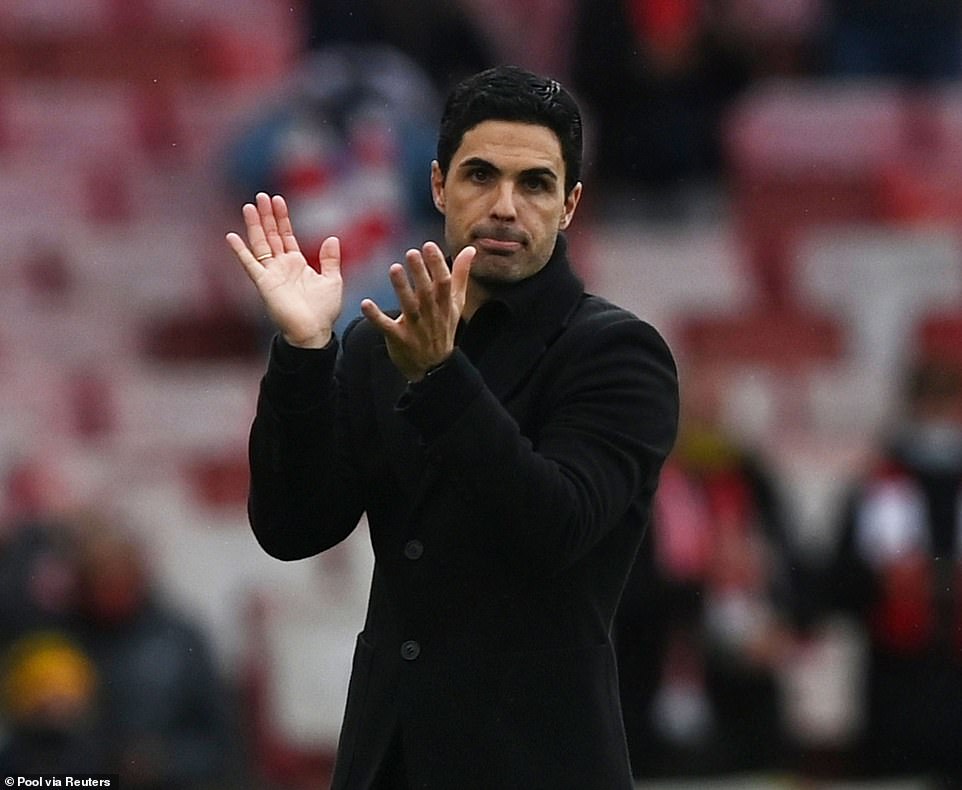 Arteta was much happier a couple of minutes later when Arsenal worked the ball from left to right and Pepe controlled Calum Chambers’s ball in before firing his 15th goal of the season underneath Sanchez. With Everton still losing and Spurs level at this stage, Arsenal moved up to seventh.

Connolly and Yves Bissouma threatened for Brighton but, with Spurs, falling behind again, Arsenal’s grip on seventh place was tightened.

On the hour, the job was done for Arsenal and it was then it was all about what happened elsewhere. Odegaard set Pepe away with a clever chance and he threaded a shot into the far corner to double Arsenal’s lead.

Partey almost had a third, controlling Xhaka’s through ball and, in one movement, turning and smashing in a volley that beat Sanchez but not the bar.

Arsenal’s job was already done by then but then came the defining late twist at Leicester.