A goal and an assist. Not the worst night for Antonio Rudiger. Unfortunately…

The goal was Arsenal’s first-half equaliser; the assist, their second-half winner. Not that Rudiger could have done much about either. These were hapless deflections more than horrible errors, a scruffy influence on what was often a scruffy game. Not that Arsenal were complaining.

This win takes them to Wembley again, for the first domestic cup final since their last visit in May. Manchester City will be favourites on the day, of course, but so were Chelsea over two legs here. Arsenal were decent value for their win, though, even if Chelsea will rue the chances missed by Alvaro Morata in the first game. They could have had a reasonable cushion here. 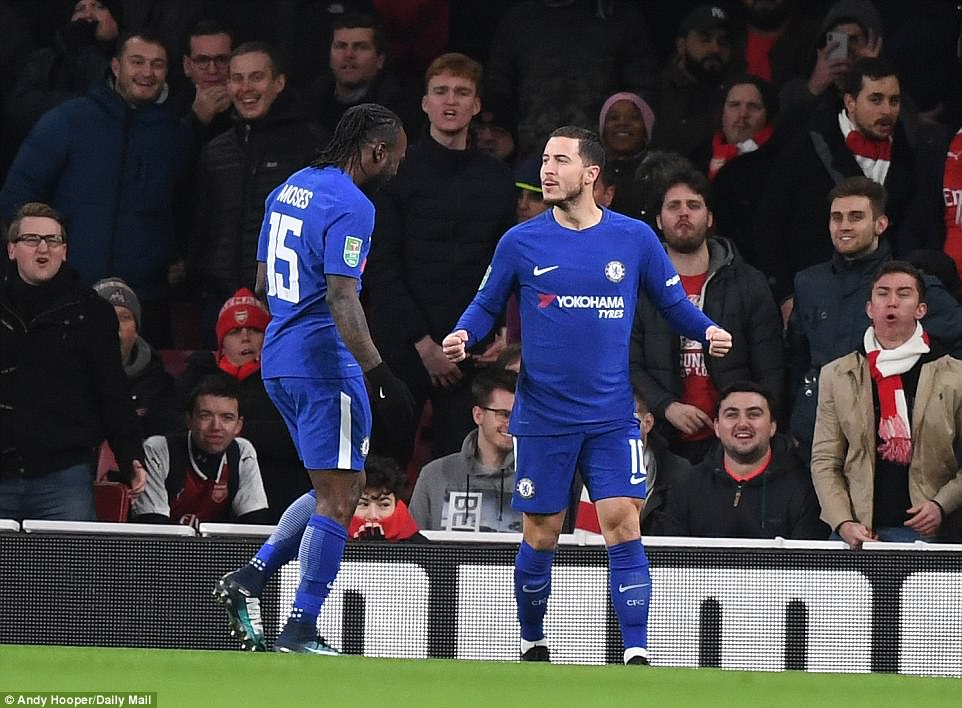 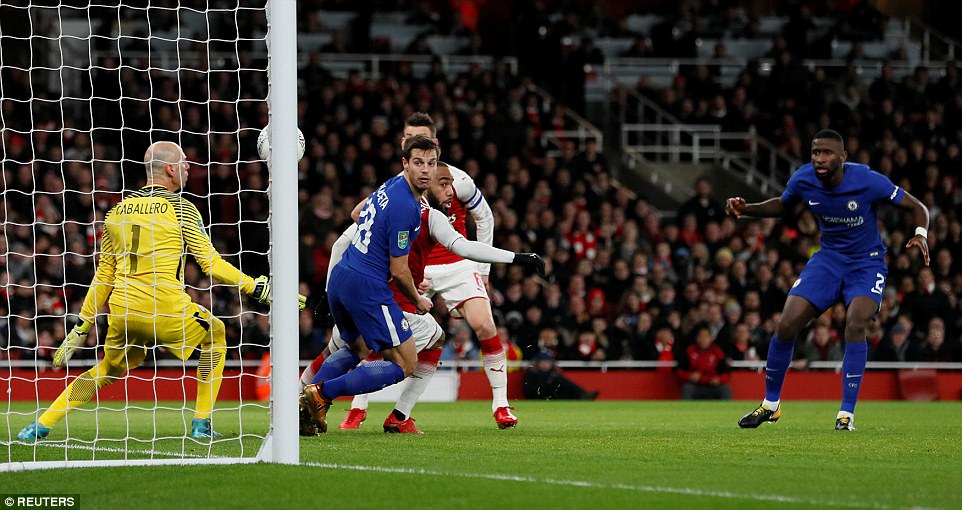 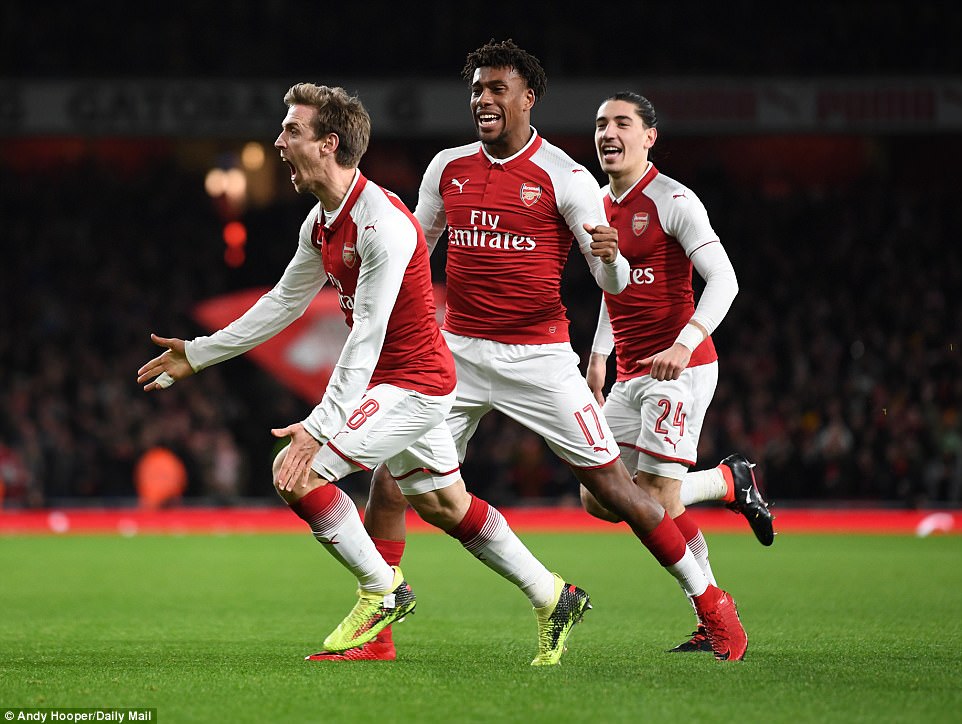 Nacho Monreal, whose initial header sparked a double deflection off Marcos Alonso and Rudiger, wheels away to celebrate 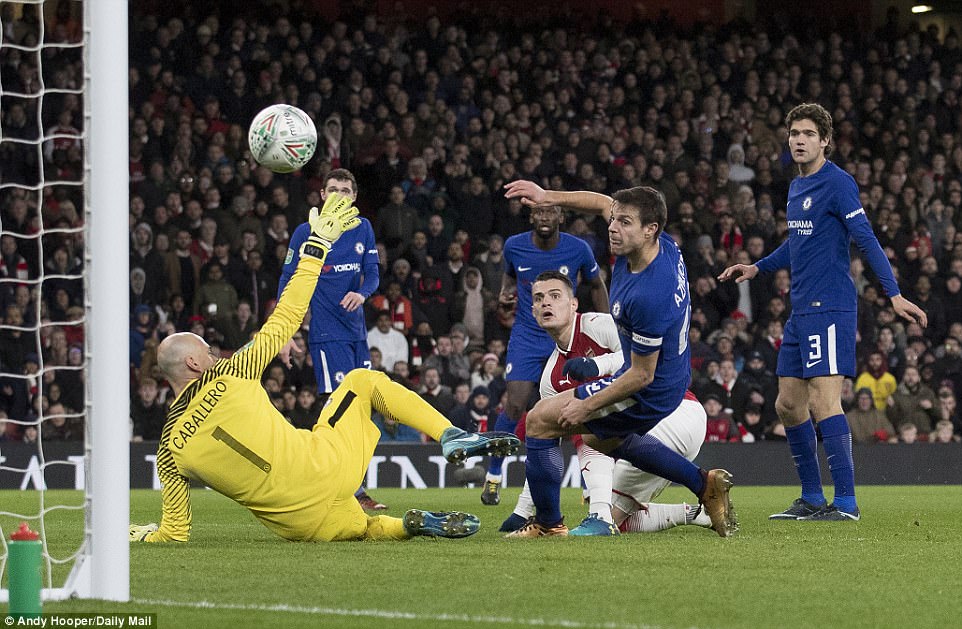 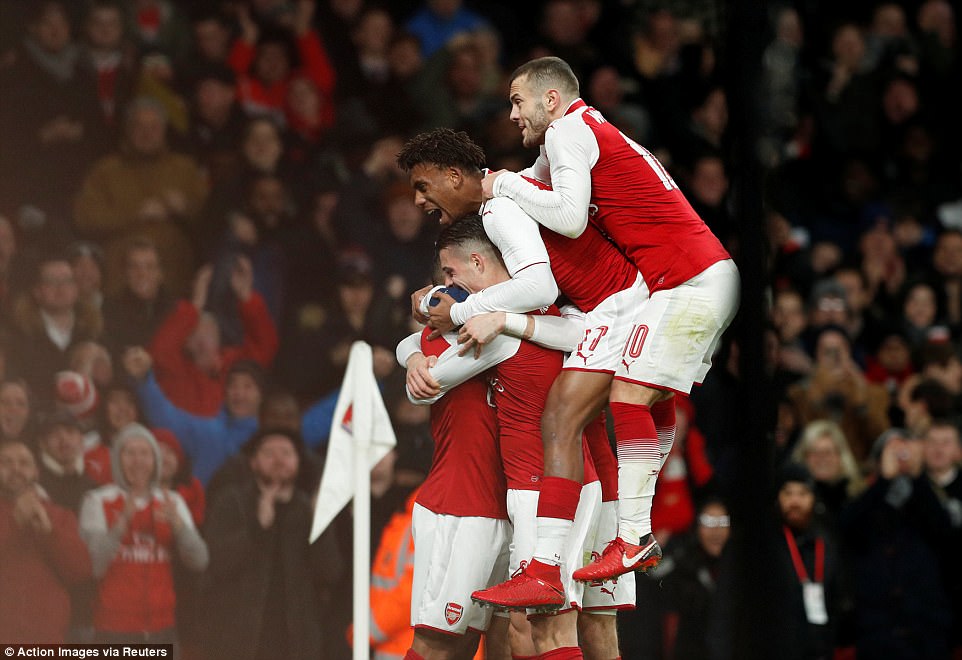 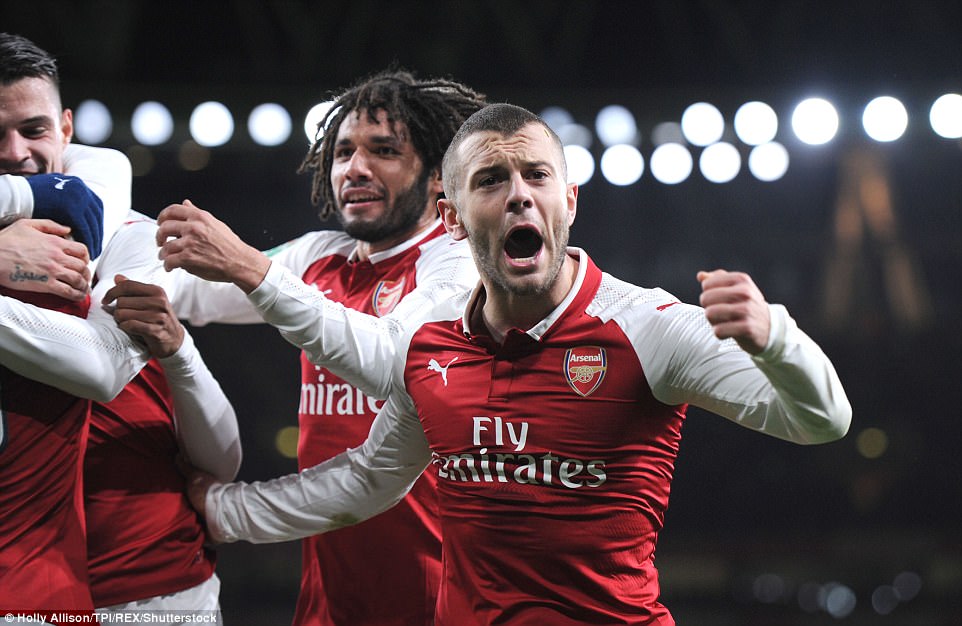 Wilshere is one of only two players remaining from Arsenal’s last League Cup final appearance; Laurent Koscielny is the other 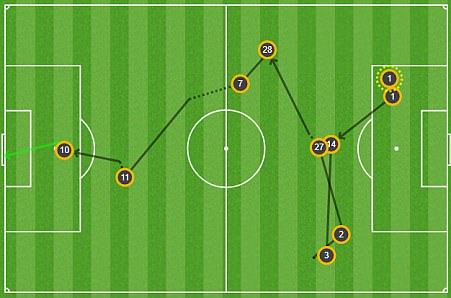 Instead they were vulnerable to random twists of fate. A header twice deflected on its way to goal, a cross diverted straight to the feet of Arsenal’s matchwinner, Granit Xhaka. The winner came after 60 minutes, Arsenal having fought back from an early goal down. By then, they were in the ascendancy, despite Eden Hazard doing his utmost to drag Chelsea back into the game. To no avail: after Arsenal took the lead, they also had the best chance of the final 30 minutes. Had Alex Iwobi taken it, the last five minutes would have been considerably less tense – not to mention four minutes injury time.

Chelsea even got a corner, the final play of the game. Ross Barkley had one job on his debut – make sure he didn’t plant it into the first red shirt. He failed and Michael Oliver blew the final whistle. It was an inauspicious start for Chelsea’s new signing. He hadn’t played a competitive first-team game since May, and it showed.

The winner was fortunate but not undeserved overall. Alexandre Lacazette, quiet otherwise, held the ball up well on the right against Andreas Christensen, before attempting a cross which clipped the legs of Rudiger. Having already diverted the ball into his own net with his head, he could have done with a break. He didn’t get it.

The rebound took the ball directly to Xhaka, who prodded it past second-string goalkeeper Willy Caballero. Ah well. A Carabao Cup final appearance is hardly going to influence the long term future of Chelsea manager Antonio Conte. These things do matter to Arsenal though. They may be losing ground in the league, but Arsene Wenger he has turned them into an excellent cup side and some would even argue those recent successes have extended his tenure. 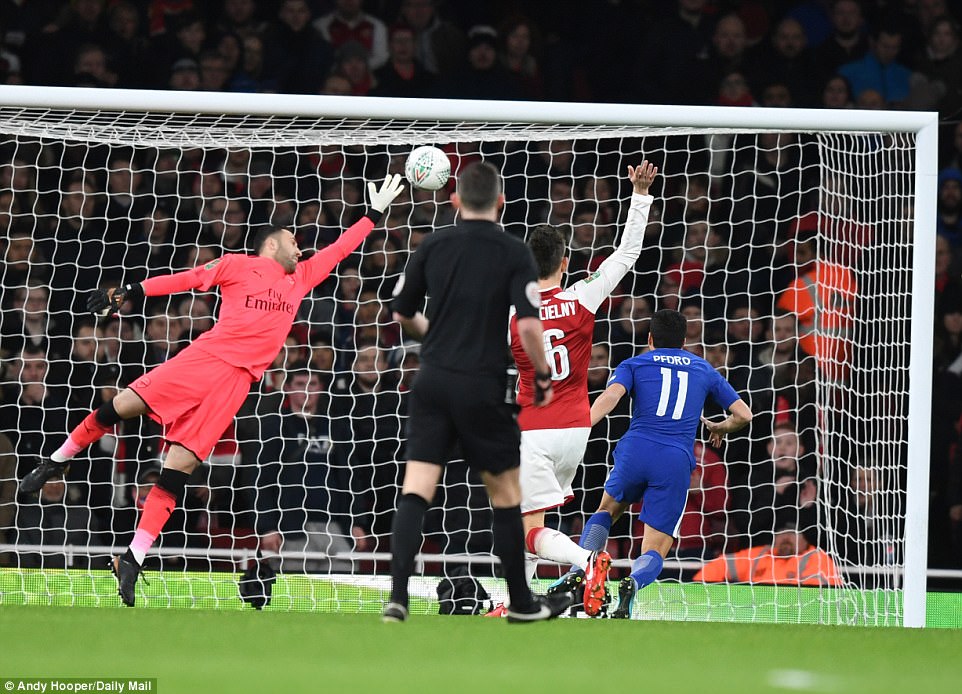 In the first five minutes, Chelsea thought they were ahead but Pedro’s header was rightly ruled out for offside by the linesman

Hazard made sure of the early goal just two minutes later though, as Ospina couldn’t do enough to push the ball wide 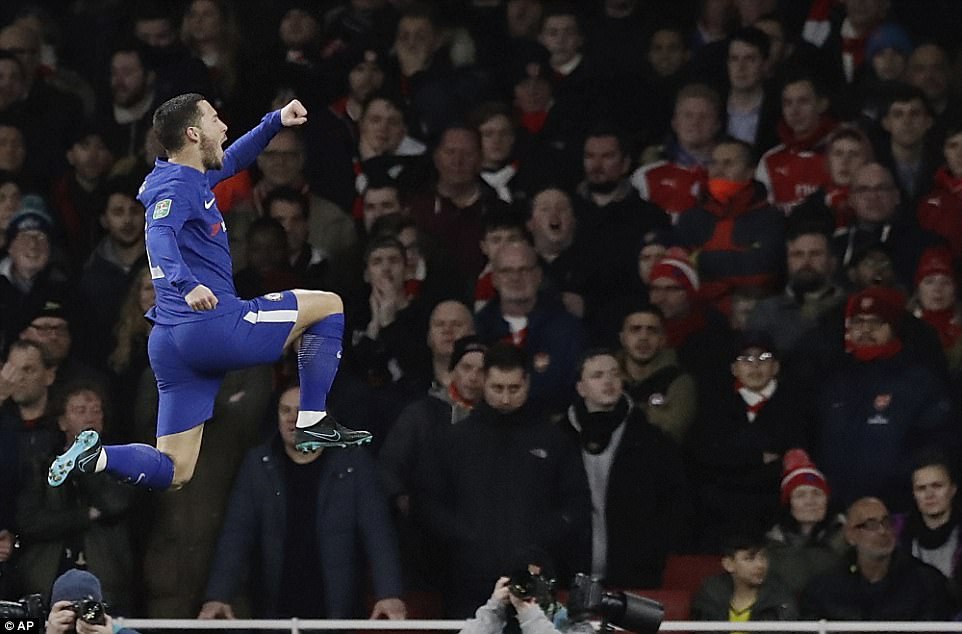 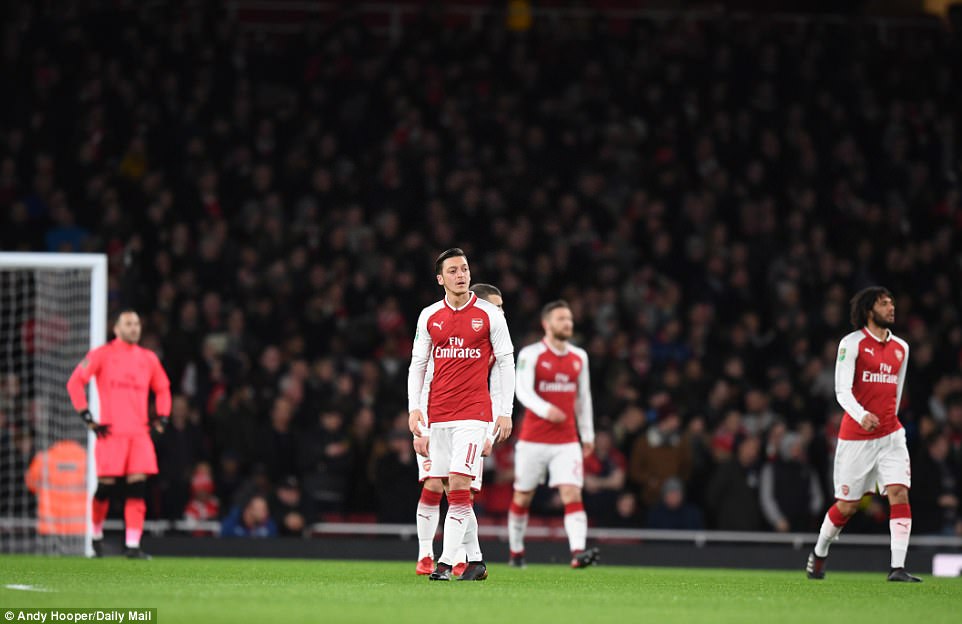 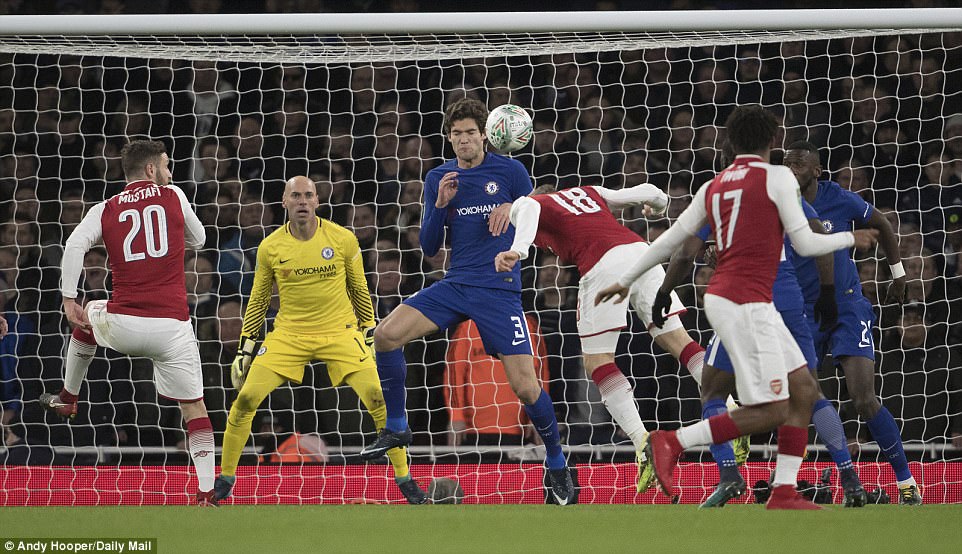 Chelsea’s lead did not last long though, as Monreal’s header first took a hefty deflection off the head of Spaniard Alonso 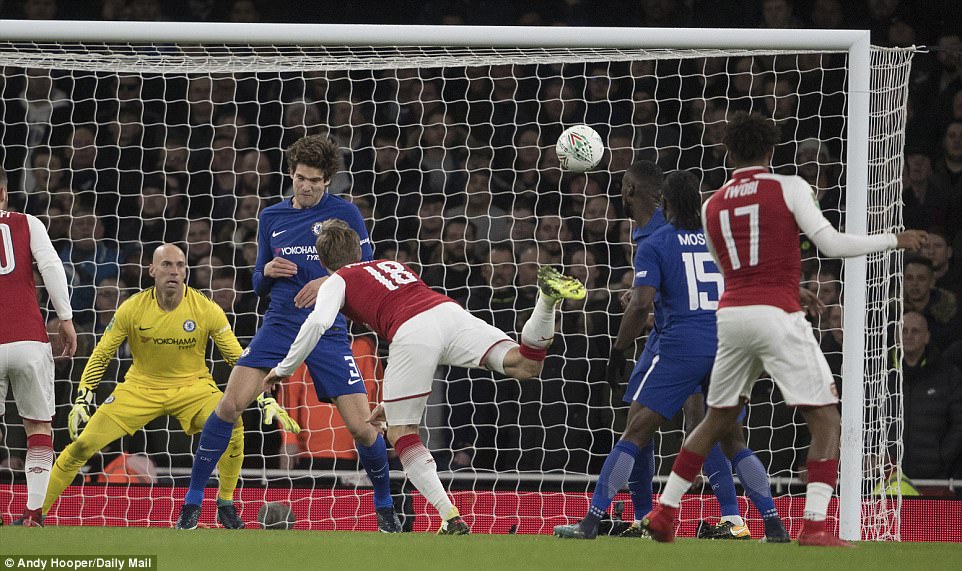 From Alonso, the ball then struck Rudiger’s head – unbeknownst to him – before flying into the back of the Chelsea net

It was with 14 minutes remaining that Iwobi should have wrapped the game up, but he hit his shot directly at Caballero with plenty of time and space. He will be pleased that, unlike Morata, he was not made to pay for his wastefulness.

Indeed, the poor souls who paid good money for the first leg of this, must have followed the rematch with a degree of envy. There was more action, and certainly more goals, in the first 12 minutes than they enjoyed in 90 at Stamford Bridge. Chelsea had the ball in the net, disallowed on a tight – but right – offside call after five minutes, scored legitimately after seven, and saw their lead erased five minutes later. And those were not the only opportunities in a frenetic opening spell.

It was more like the league game here, earlier this month, which finished 2-2 and could have been 5-5. At times it resembled one of those pick-up matches over the park, players doing as they pleased with scant regard for shape. Only as the game wore on did it become more structured, Wenger in particular tinkering between a back four, a three, and then four again, as he sought to contain Chelsea. He has done a job on them over these two ties – an intriguing reversal of a familiar pattern.

The VAR was in play on Wednesday night – as the Carabao Cup continued its random quest for truth – and Oliver used it at the first opportunity. Cesar Azpilicueta clipped the ball through, Pedro sprinted away from Arsenal’s back line and steered a header past David Ospina. It looked too good to be true; and was. Scott Ledger’s flag was up and the VAR rerun showed him to be correct. Pedro was off, but not by much. Arsenal could not afford to leave gaps in their ranks like that again. Being Arsenal, they failed to learn this rather obvious lesson. 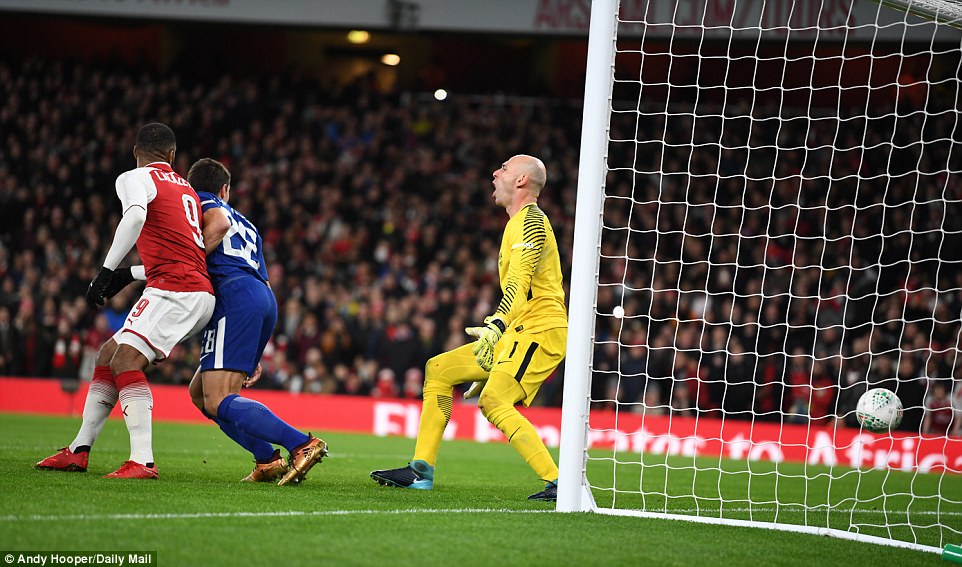 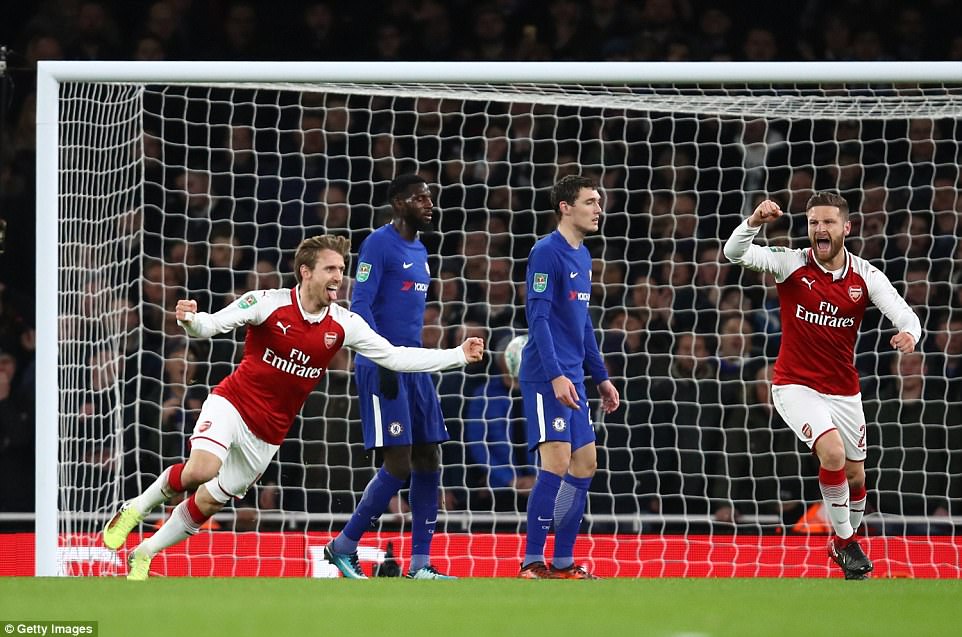 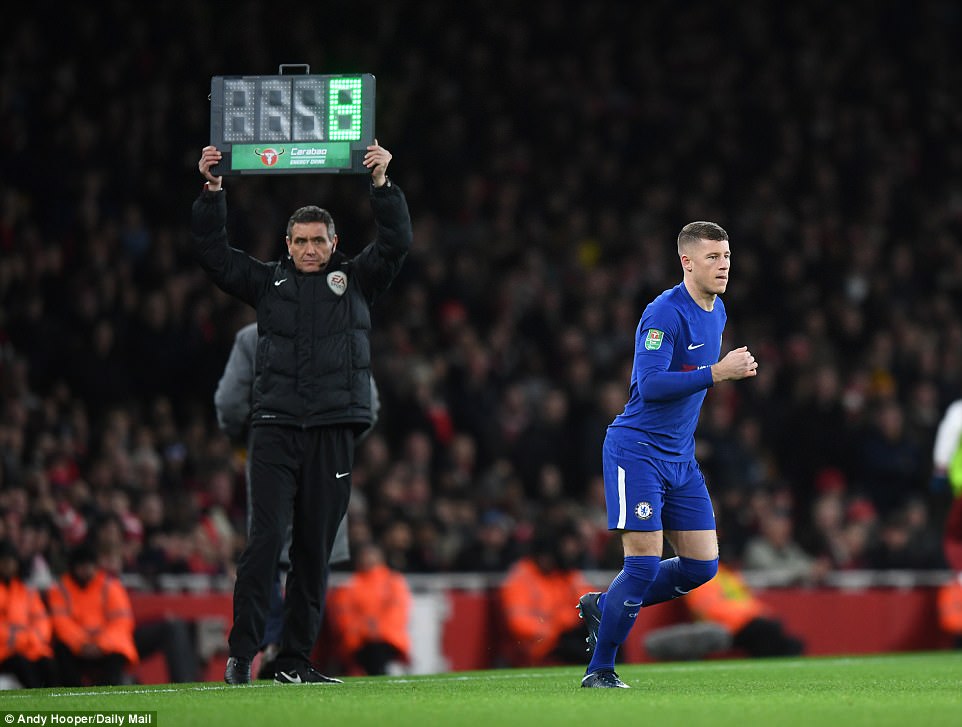 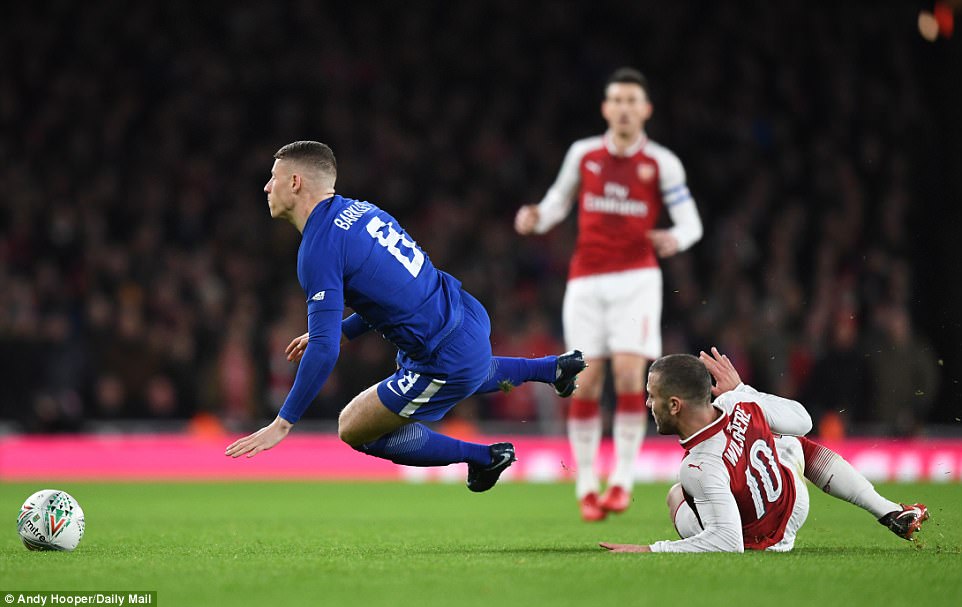 Barkley had not played all season but was given a feisty welcome by Wilshere, who earned himself an early yellow card 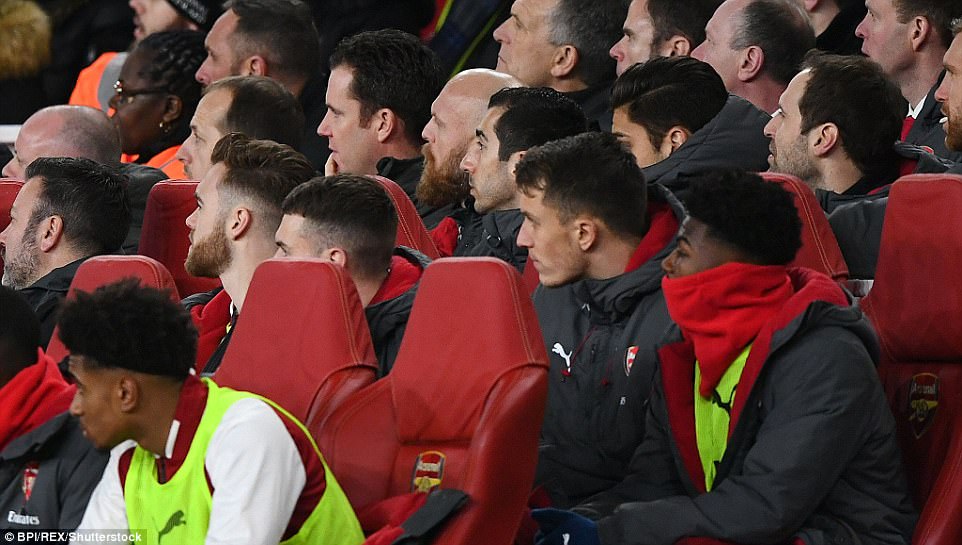 So two minutes later, they paid. It was a lovely, fluent passing move, started by N’Golo Kante, who fed the ball into Pedro, his deft flick finding Hazard exploiting a hole in the middle of Arsenal’s defence that the team bus could have driven through. Unlike Morata, Hazard made no mistake, slipping the ball past Ospina without fuss.

Arsenal should have equalised within two minutes. Jack Wilshere has been in great form for Arsenal of late, but his touch was poor when put through by a pinger of a pass from Iwobi. Wilshere’s heavy control diverted the ball into the path of Cabellero, sustaining a minor knock. Not that it had any influence on Arsenal’s equaliser minutes later.

No goalkeeper could have kept the ball out from its zig-zag path to goal. Nacho Monreal won the header but from there, the ball took on a life of its own. It hit Marcos Alonso on the head, rebounded off the head of Rudiger and defeated Caballero utterly. He might have reacted to the first ricochet, but the second left him stranded.

Hazard remained the danger, though, although the anger the home fans directed at him for a perceived dive in the second-half was misplaced. He had already been booked for a foul on Mesut Ozil when he went through on goal, but lost his footing, and fell. Yet what would once have been a source of harmless merriment was now a cause for fury. The locals wanted him booked for diving, and therefore sent off. It would have been a travesty.

There was no appeal from Hazard, no attempt to make capital of the situation. He tripped. That was all. Footballers have to be free to fall over without being accused of simulation. Sometimes it truly is no more than a slippy floor. 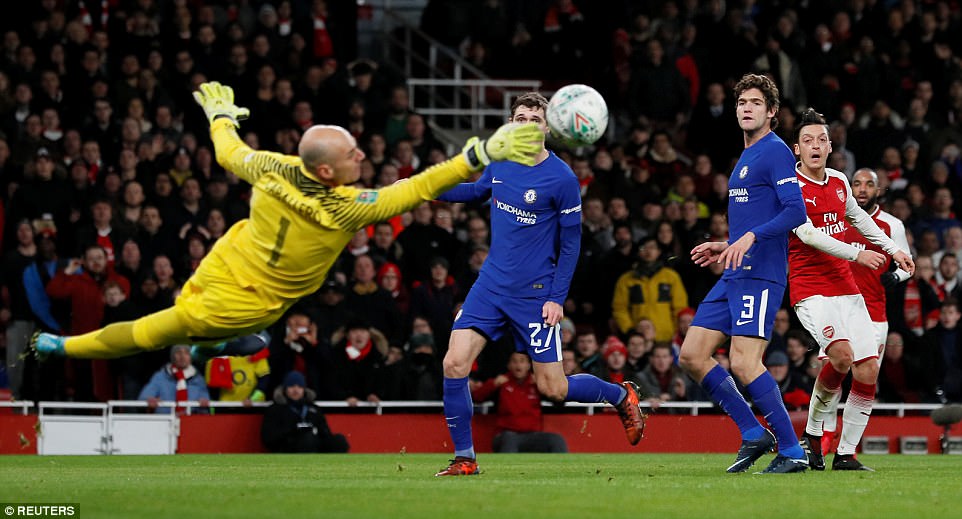 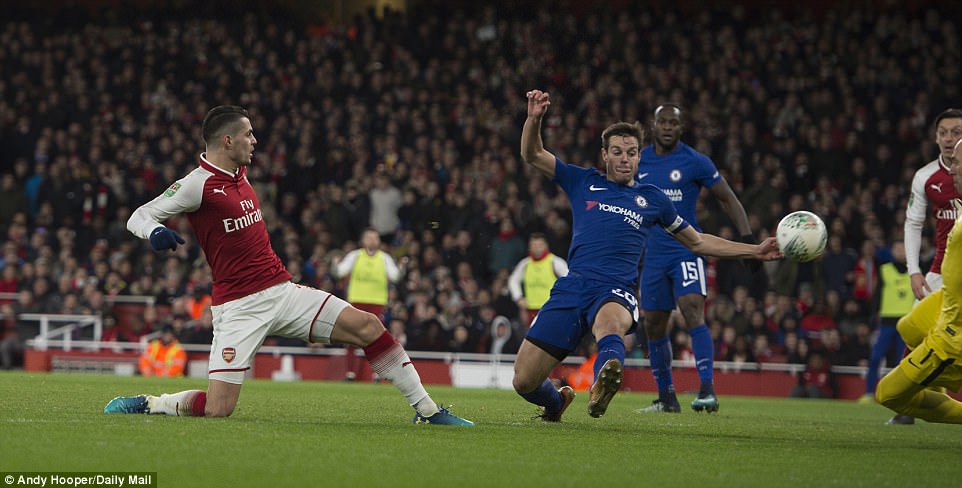 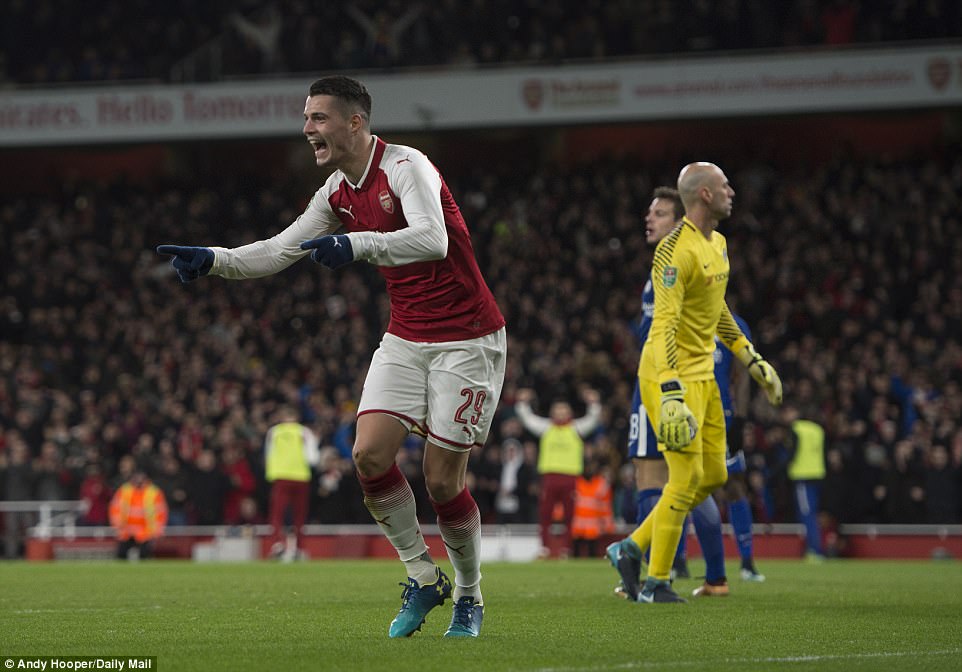 Xhaka looked delighted to score a rare goal from inside the penalty area; it turned out to be the Gunners’ winning strike 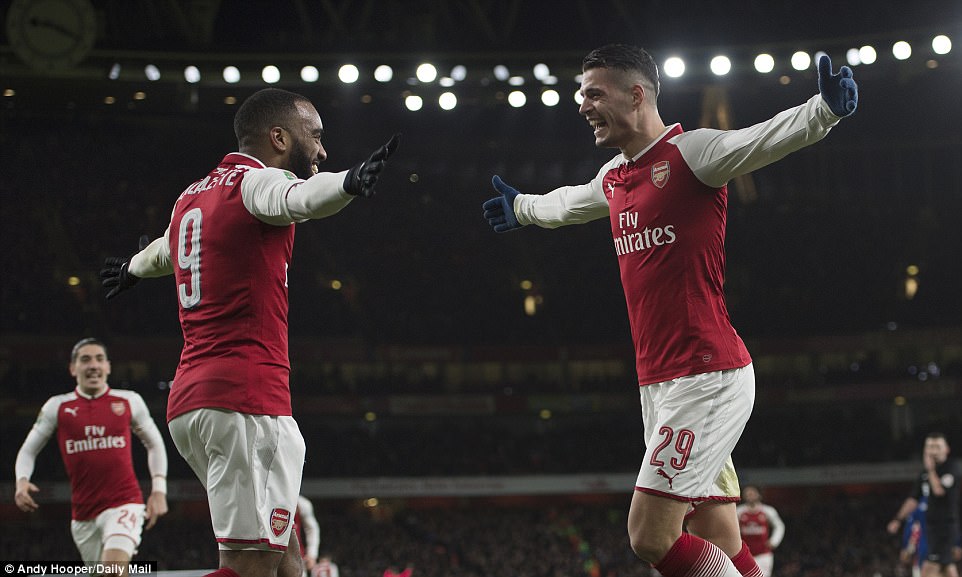 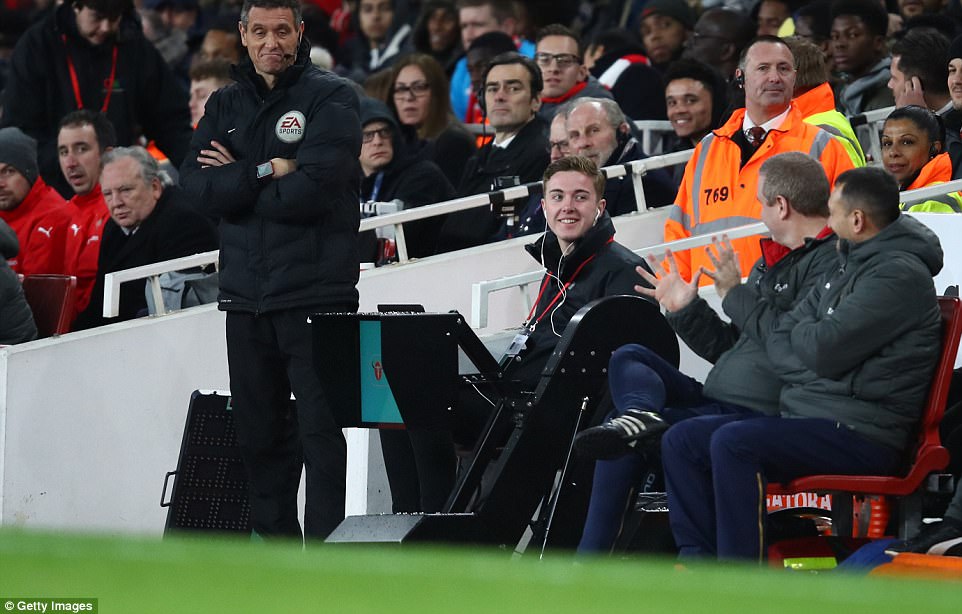 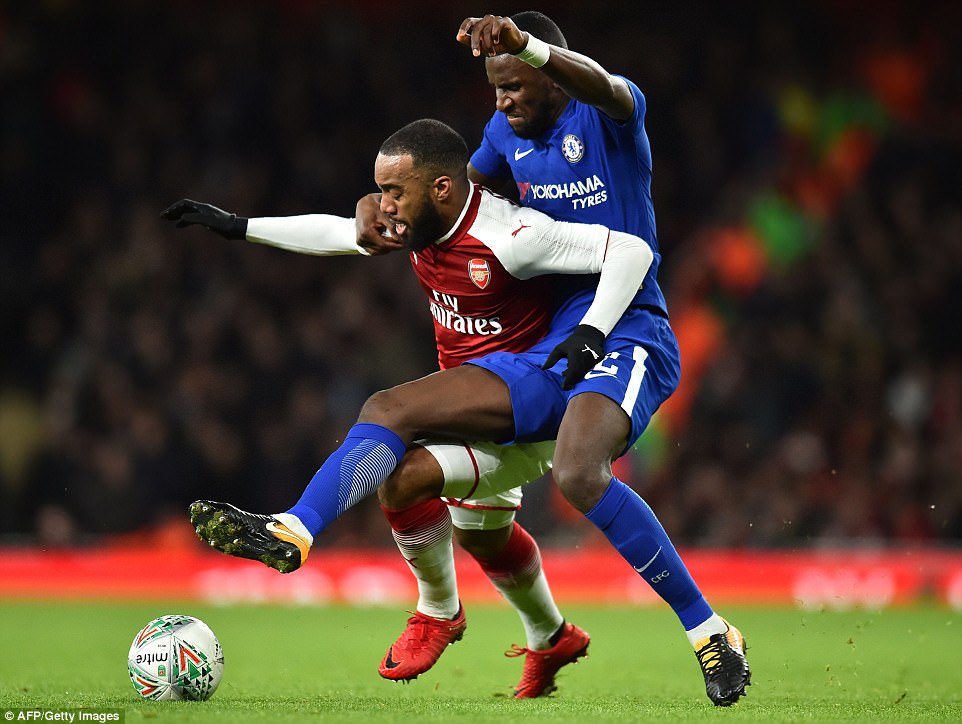