Arsenal have announced a five-year £200million extension to their contract with shirt sponsors Emirates in a deal described as the largest in the club’s history.

Emirates, who also own the naming rights to the stadium, will continue to sponsor Arsenal’s shirts and training kit until the end of the 2023-24 season.

The contract is worth £40m a year and continues Arsenal’s partnership with the Dubai-based company which began when the Gunners moved from Highbury to the new ground in 2006.

The deal continues the longest-running sponsorship partnership in the Premier League and Arsenal chief executive Ivan Gazidis told the club’s website it will provide the investment required for the Gunners continue to compete for silverware.

‘Our shirt partnership is the longest running in the Premier League and one of the longest relationships in world sport,’ said Gazidis. ‘This mutual commitment is testimony to the strength and depth of our unique relationship.

‘Emirates are again demonstrating their great belief in our approach and ambition and their significantly increased investment will help us continue to compete for trophies and bring more success to the club and our fans around the world.’ 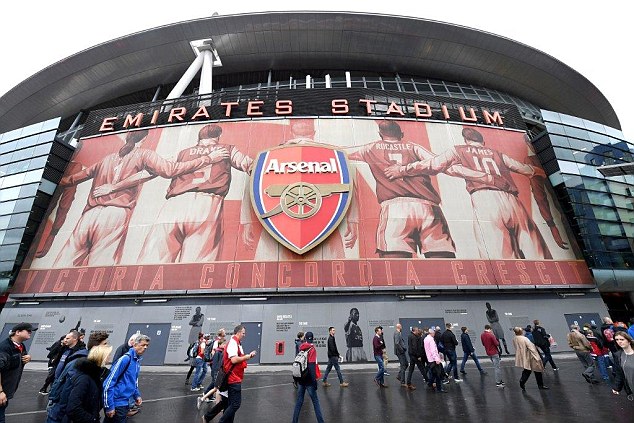 Arsenal have been searching for a new shirt sponsorship deal since June 2017 amid suggestions that Emirates were only interested in maintaining their naming rights on the stadium.

The Gunners were thought to have been interested in separating their kit deal from the stadium deal to maximise revenue but later hit out at suggestions they would end their shirt sponsorship deal.

In total since the summer of 2013, Arsenal have earned £117m from off-field activities compared to £280m raked in by Manchester United.