‘I will stay for one more season’: Arsenal target Nicolas Tagliafico reveals he will not leave Ajax this summer despite interest

Ajax full-back Nicolas Tagliafico has addressed talk of an imminent summer transfer, by insisting he will remain in Amsterdam for one more season.

Tagliafico has been one of the stand-out performers this season in an Ajax side which has captured the attention of the football world.

A young and seemingly untested team, Ajax have surged to the semi-finals of the Champions League and stand just one game away from the Madrid final. 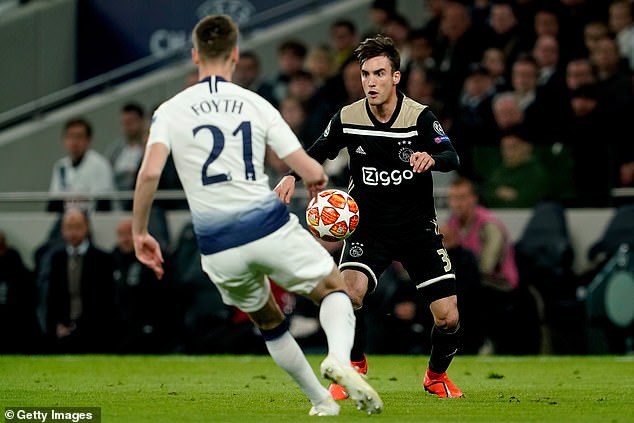 The squad has attracted vast interest as a result, and Tagliafico has been linked with Arsenal among others.

Taking to Ajax’s official social media channels on Friday however, the defender filmed a short video to address the concerns of supporters.

‘Hello fans, how are you?’ said the 26-year-old in the video on Twitter.

‘I want to tell you that I will stay for one more season.

‘Hopefully it will be a great year, like it is this year. A hug to all of you.’

Ajax’s team of unearthed talent this season, including Matthijs De Ligt, David Neres, Donny van de Beek and Hakim Ziyech are all being linked with moves to European clubs.

Frenkie de Jong has already signed an agreement with Barcelona, and will move for £65million at the end of the season.