Arthritis patients can grow their own knee replacements

Arthritis patients are to be given ‘grow your own’ knee replacements after the cloning procedure was given the green light by NHS health chiefs.

The harvested cells are then grown in a laboratory so they multiply and are made into a patch that can be put back into the knee, repairing any defects. The advance could save patients from ever needing a prosthetic knee implant.

About 95,000 knee replacements are performed each year in the UK, with the majority of patients suffering from advanced osteoarthritis

About 95,000 knee replacements are performed each year in the UK, with the majority of patients suffering from advanced osteoarthritis – degeneration of the cartilage that lines the joints, allowing smooth movement. When cartilage is damaged, bone can grind on bone and lead to agonising pain.

This can be as a result of sporting injuries or degenerative conditions in adolescence, as well as ageing.

Since a knee replacement typically wears out within 15 years, many younger patients or those who are suffering from less severe – but still painful – damage may be told that they are not candidates for the operation.

Patients with small defects have been offered microfracture, in which a surgeon makes very small holes in the bone near the area of damaged cartilage. The subsequent healing process triggers new cartilage to form.

But now patients with larger defects will be offered a technique developed 30 years ago in Sweden and approved by NHS watchdogs the National Institute for Health and Care Excellence (NICE) last month. The procedure, called autologous chondrocyte implantation, will be offered to patients who have not had previous knee-repair surgery and where there is minimal osteoarthritis damage to the knee.

‘We can now regrow damaged joints using cells from the patient’s own body so there is no risk of rejection, sparing patients years of pain and without needing to use a plastic or metal implant,’ says Professor Leela Biant, consultant orthopaedic surgeon at Central Manchester University Hospitals and Spire Manchester Hospital.

‘We can rescue the knee and repair it so younger patients can stay active, return to sport and play with their children, and don’t face a knee replacement which eventually will need to be done again.’

Patients have an MRI scan and keyhole surgery under local anaesthetic to take a sample of cartilage the size of a Tic Tac sweet from the damaged area. Any damaged ligaments are repaired at this time.

Over the next six weeks, the chondrocyte cells which will grow into new cartilage are separated using an enzyme. They are grown in a cell culture so they multiply up to three to four million cells.

The patient then has a second 30-minute operation, under general anaesthetic. The surgeon makes a small incision above the knee and presses a biodegradable patch made of collagen – often pig collagen specially treated to remove all cells – into the defect. 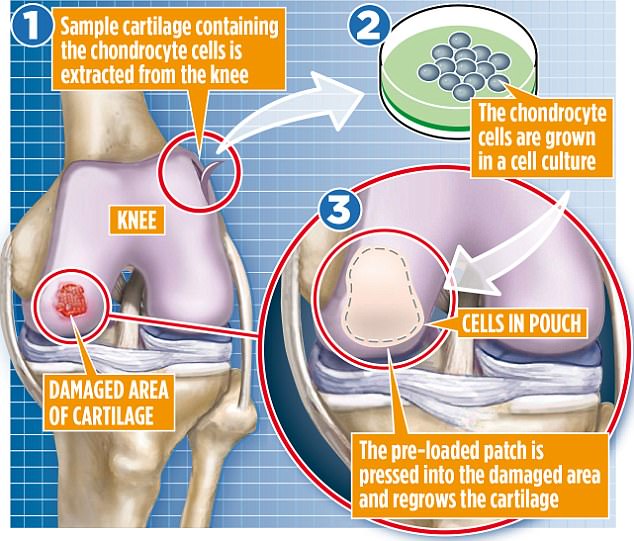 The patch comes pre-loaded with chondrocyte cells and is cut to shape to fit the defect.

Over the following few months, the chondrocyte cells will grow and multiply to form hard cartilage, identical to normal knee tissue.

Mike Ross, 46, a lawyer from Edinburgh, started having pain in his right knee five years ago which lasted more than six months. ‘It was really sore, and it felt as if would collapse all the time,’ he said.

An MRI scan showed up a large ‘wear and tear’ hole in the cartilage. Prof Biant harvested cartilage cells from his knee under general anaesthetic, and sent them to be grown on in the lab.

Six weeks later, Mr Ross had a second operation to implant the cells back into the knee.

He spent ten weeks in a brace, and had to avoid hard twisting for a year while the cartilage hardened.

Three years ago he had autologous chondrocyte implantation in his left knee too. ‘Now I can run and kayak again, and do everything with my children, who are six and 12,’ Mr Ross said. ‘Best of all, I don’t face a knee replacement.’