A keen illustrator has captured life in Britain by sketching a scene every day for a year on whatever came to hand.

Tim King, 30, of Lewisham, South East London, used scraps of paper, coffee cups and even leaves for his series of daily drawings on life in London last year.

He drew impressive sketches of whatever came to mind that day, including a mother shopping with her young children, World Cup goals and thousands of protesters marching against US president Donald Trump.

Artist Tim King drew one of his sketches on a coffee cup, which said: ‘No mum, I can’t eat the honey roast parsnips, I’m vegan’ 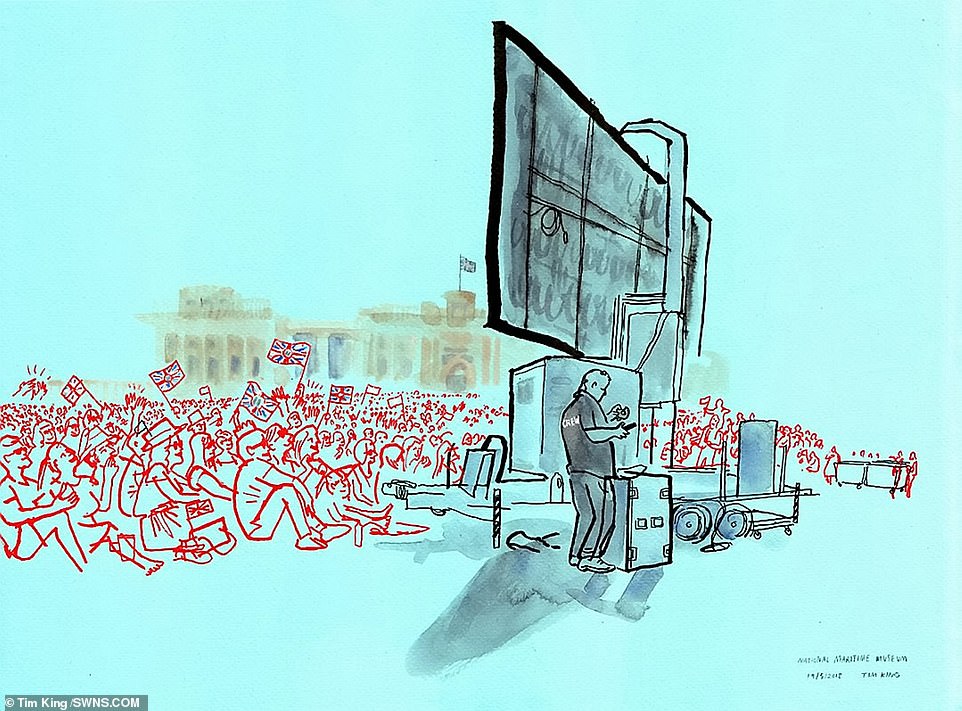 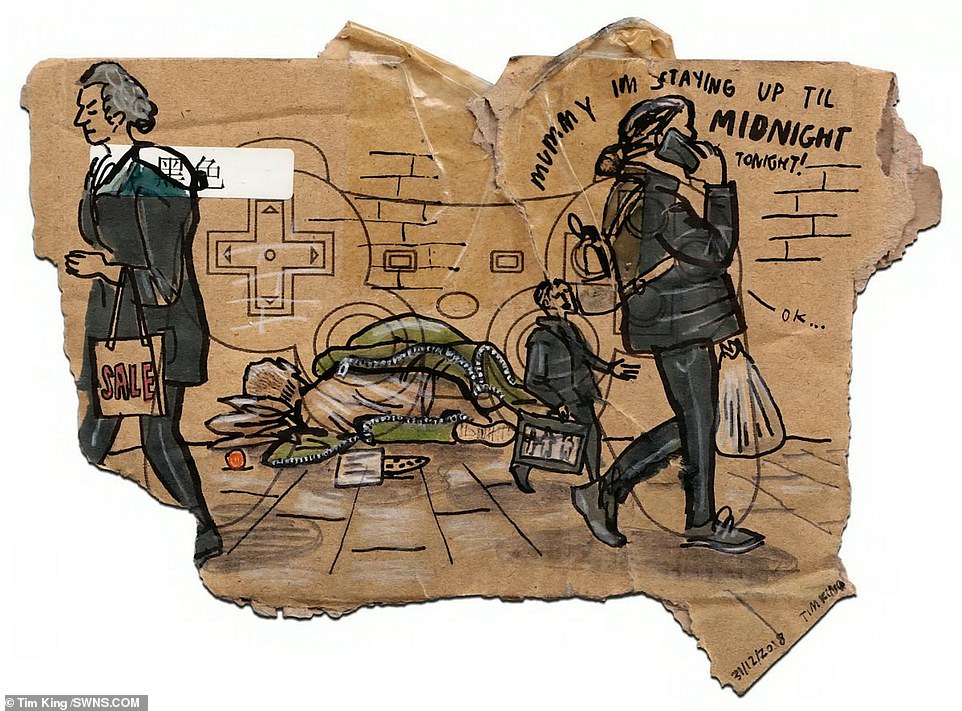 Mr King took up the challenge in 2014 after a bet with friends, who pledged to write a joke and take a photo every day. Since then he has completed the project every other year – including in 2018 – which he said was ‘crazy’.

He said: ‘After a few months of doing a few drawings a day I realised it was interesting – beyond just being a bet. I was creating moments in drawings that would otherwise get forgotten.’

Mr King, who is a freelance artist, said he was inspired by his home area, adding: ‘I did quite a lot in Lewisham. For people’s reactions during the World Cup I was usually in a pub in the area.

‘Everybody was becoming more and more excited and surprised by the football and everyone was out because it was so hot. When England scored, the sketch will look quite rushed and there’s arms going everywhere. 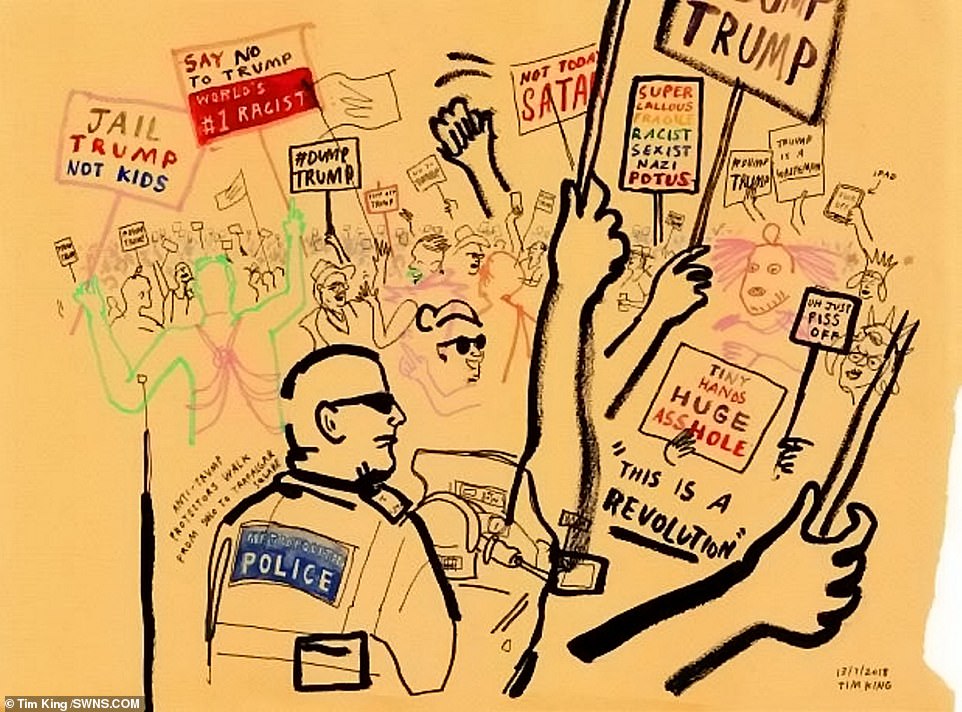 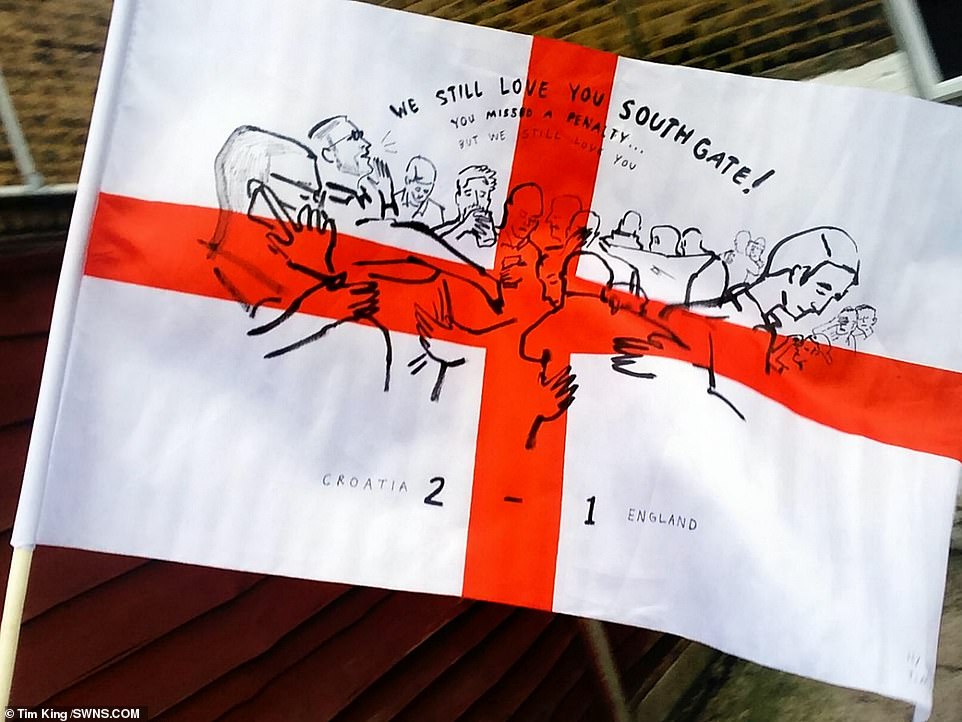 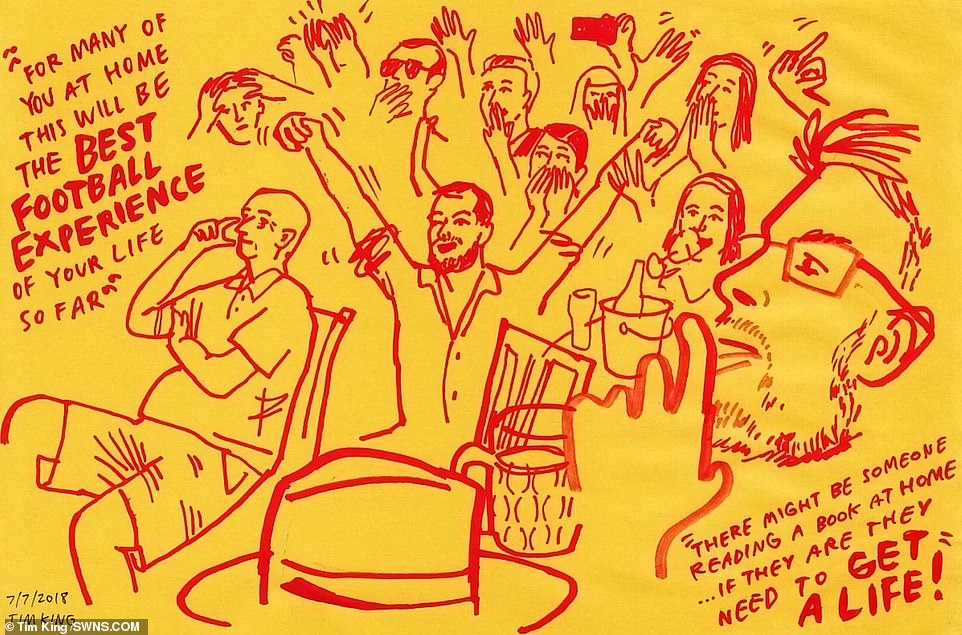 ‘You look at the drawing and get a sense of how quick that moment was.’

And on the day of England’s famous World Cup defeat against Croatia in the semi-finals, Mr King reproduced the emotional moment hundreds of football fans in London Bridge fell silent – on a St George’s Flag.

He said: ‘The second the game finished everyone looked really sad and made phone calls. I like to draw on things other than paper. It adds another lawyer to the drawing.

‘With the coffee cup drawing – everyone has held a coffee cup and it adds to what that’s about. I’ve also got drawings on beer mats and Lemsip packets.’ 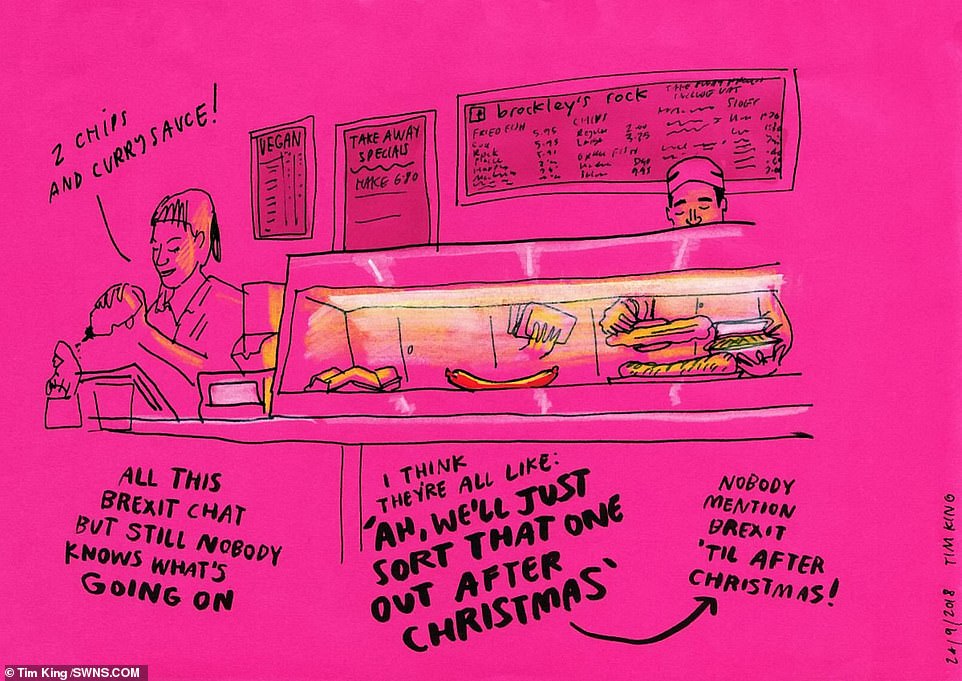 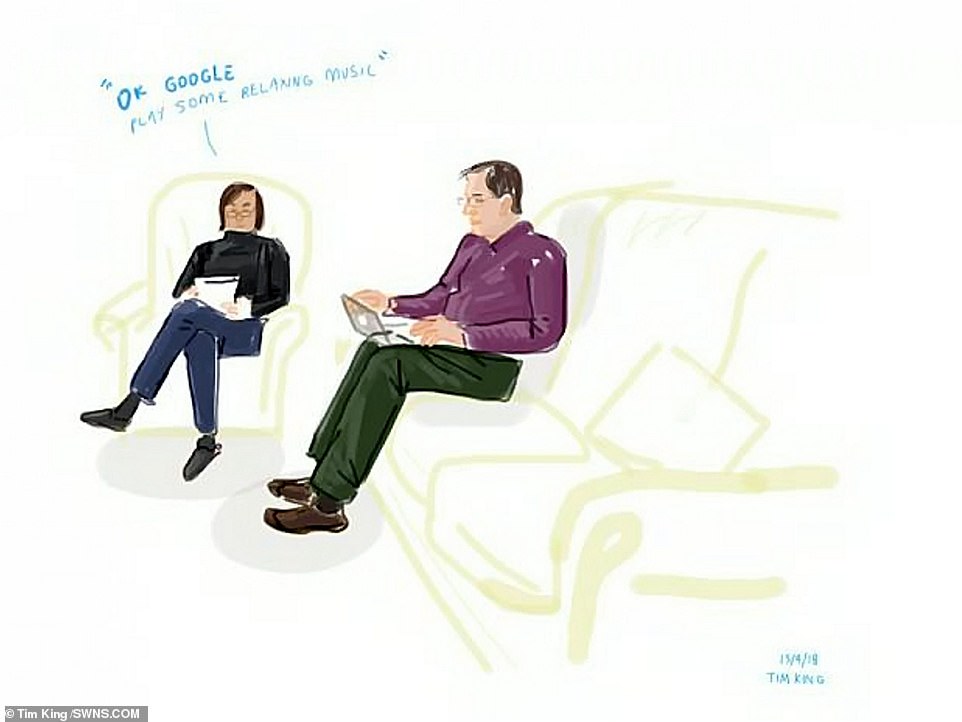 An April 13 sketch is of his mother and father sitting at home, with a speech bubble saying: ‘Google, play some relaxing music’ 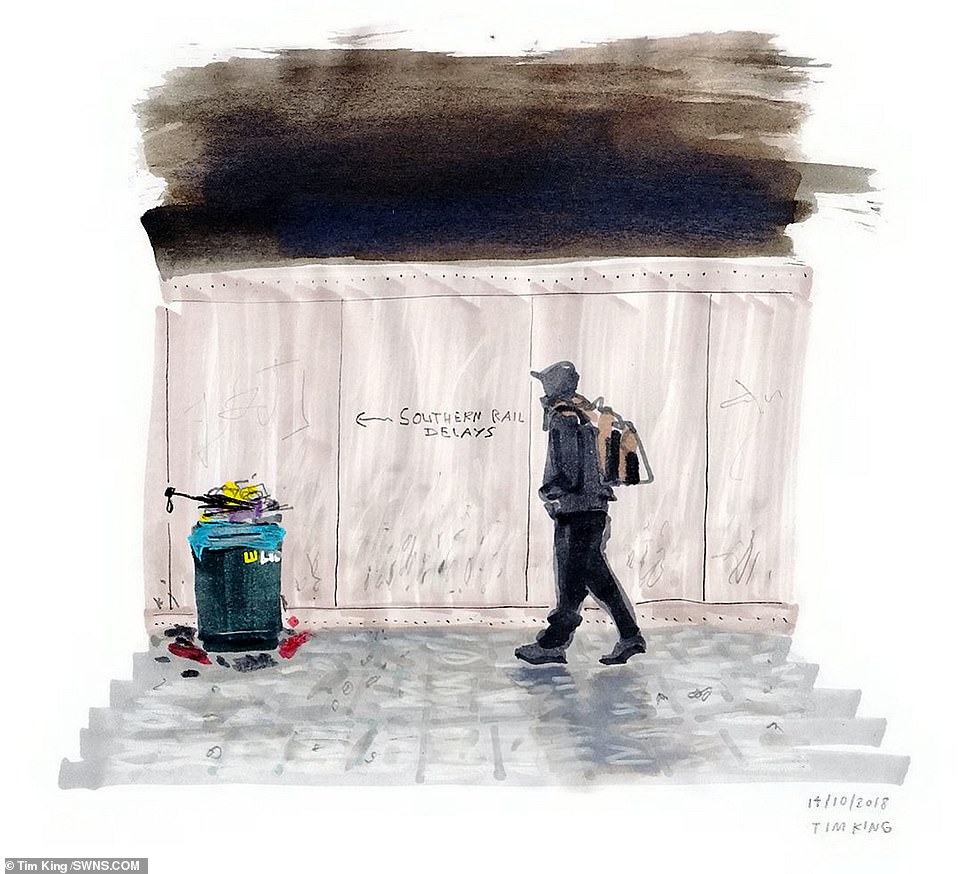 Mr King’s favourite sketch is of when protesters marched against Donald Trump’s visit. He said: ‘That was fun to capture because there was so much going on. I was working in Soho and when I left at 4pm the streets were just packed.

‘I had never seen anything like it. I went into the middle of the crowd and started drawing. I walked to Trafalgar Square with all these people in costume singing and chanting.

‘It was also interesting because people weren’t just holding placards made from cardboard. They were holding up iPads and phones that read ‘F*** Trump’.’

But Mr King said it was not just the big events of the year that are worth memorialising in pencil. One sketch is of his mother and father sitting at home. A speech bubble next to his mum said: ‘Google, play some relaxing music.’ 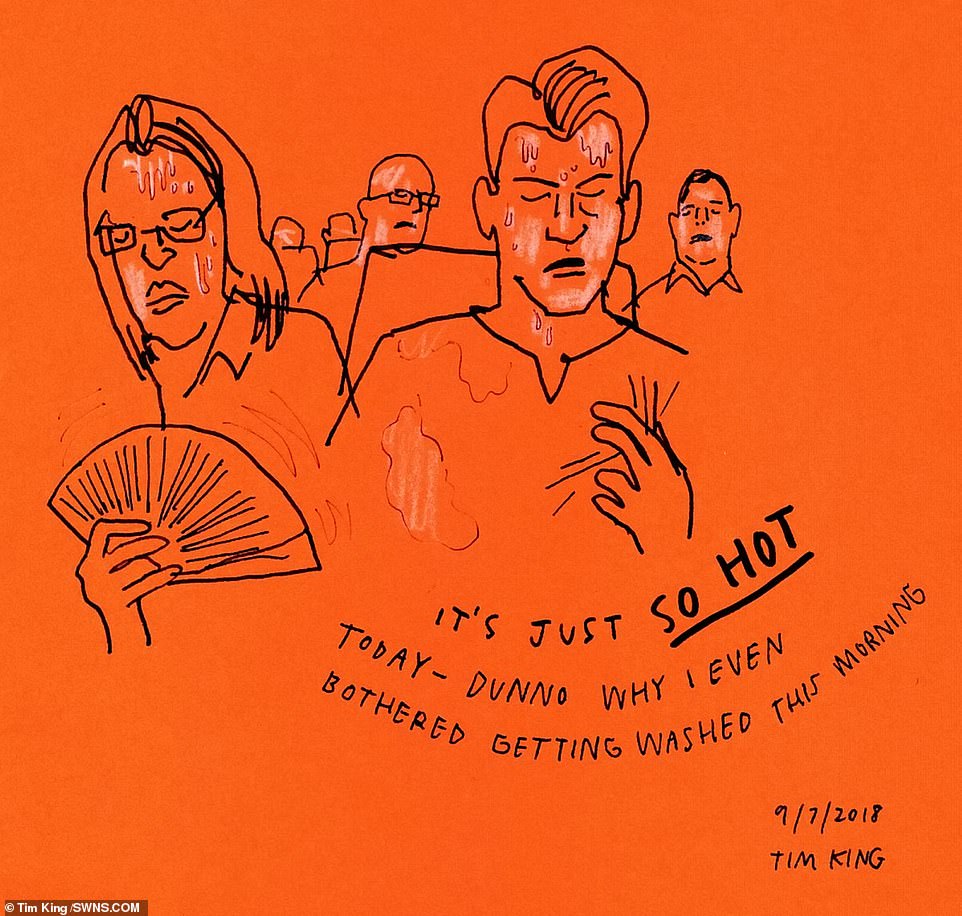 Mr King captured the summer heatwave that gripped Britain on July 9, with people pictured sweating and fanning themselves 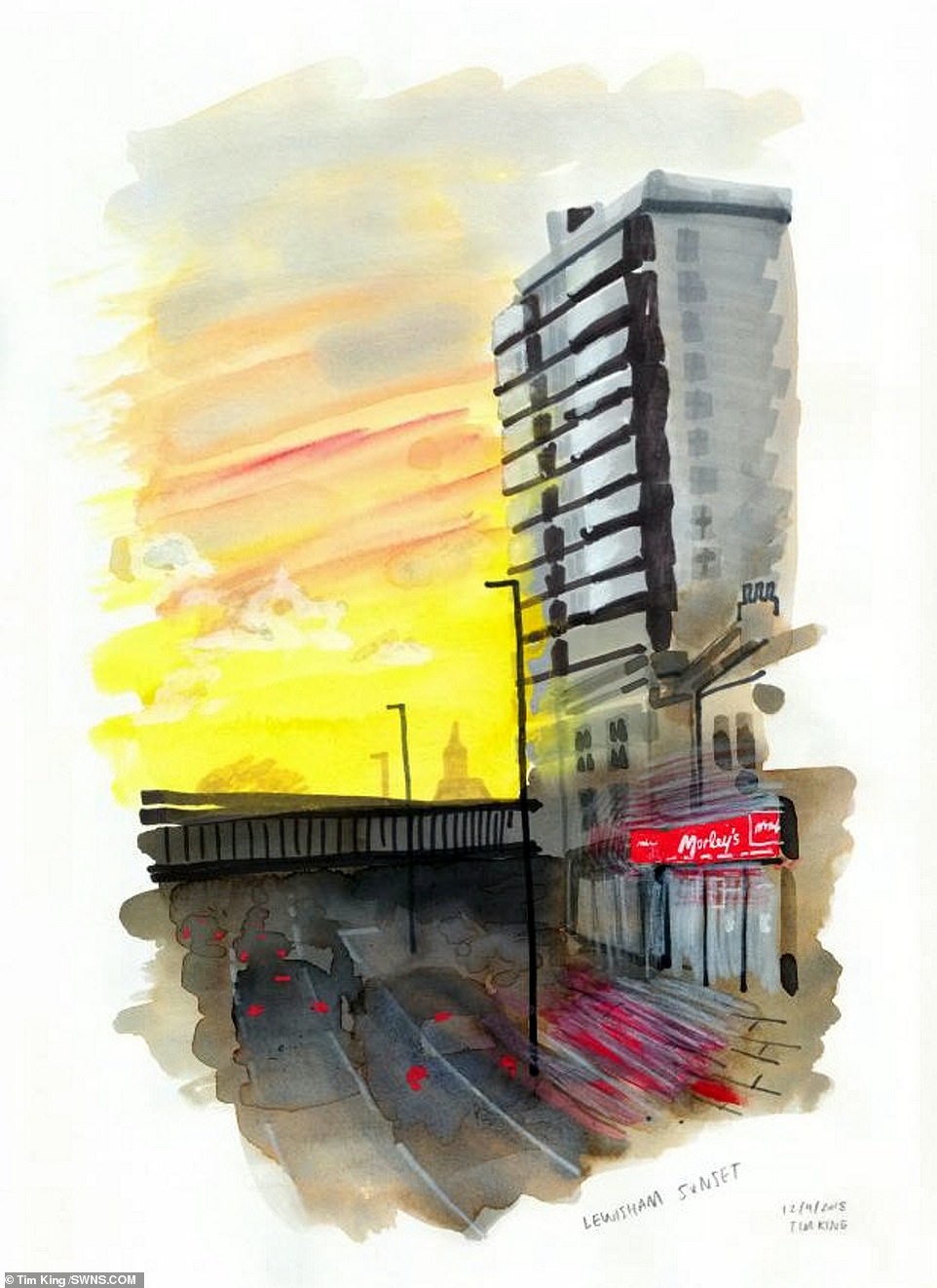 A branch of the Morley’s fried chicken chain in Lewisham, South East London, is sketched at sunset by Mr King on April 12 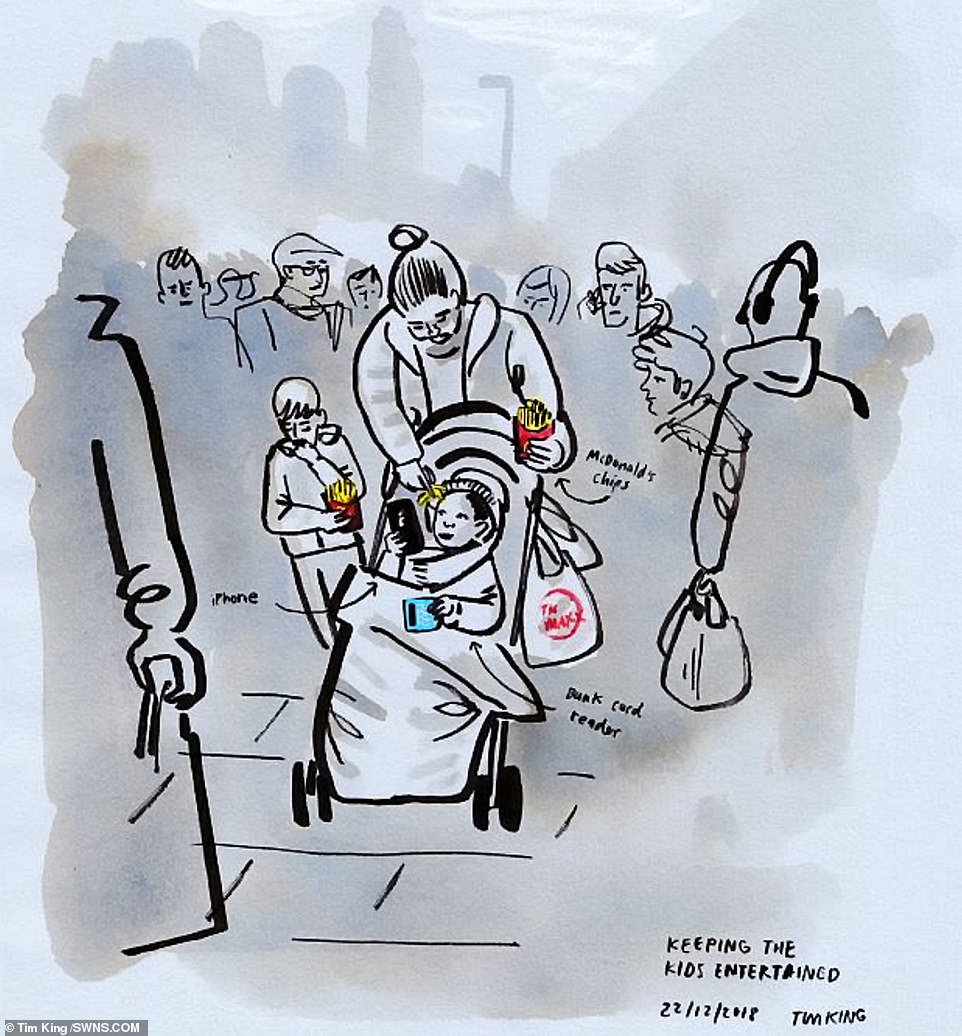 He said: ‘That is my mum and dad in Bristol. There’s always these big things happening but I just try to draw normal life as well. I got them a Google Home at Christmas, now they use it all the time.

‘She just said to it one day to play some relaxing music, I thought that was funny. I did a lot of regular stuff like on buses and trains.

‘Newspapers, history books and cameras don’t always remember the sorts of things I have captured – changes in fashion, and technology for example. Just subtle ways of remembering that period.

‘These are things you wouldn’t think is worth a photo. They might not seem interesting now but in years to come it will be interesting to look back on.’

Tim King: Draw on Real Life opens at 6pm tomorrow and will run until March 3 at Deptford Does Art, SE8 4AF