An artist’s photographs of his amazingly realistic paintings in the scenes they were originally created appear to blend effortlessly into their subject.

The images, which are set in a sequence of picturesque locations, are created by Aaron Schuerr, 46, from Livingston, Montana, who is a fine artist.

Aaron, who started painting in the 90’s, says he loves nothing more than painting outside as he feels ‘truly in the moment.’

His subjects range from thawing rivers running through the icy mountain range at Yellowstone National Park, to gnarled trees poking out of plains of toasted grass at Anza Borrego Desert State Park in California.

His stunning shots in their original context have amassed a huge following on he began sharing images of his easel artwork on his social media accounts. He said people like being able to see where the pieces were created and how they compare.

He added: ‘I try to respond openly and honestly to the landscape and let it dictate the terms. I’m not trying to copy the landscape, I’m trying to describe my relationship to it in visual terms.

‘The social media following has been a surprise. I’ve never had any kind of marketing strategy – I just share my work.

‘I stumbled on what I call ‘easel shots’ a while back, and people really respond to them. It puts the artwork in context in a way that is informal and inviting. 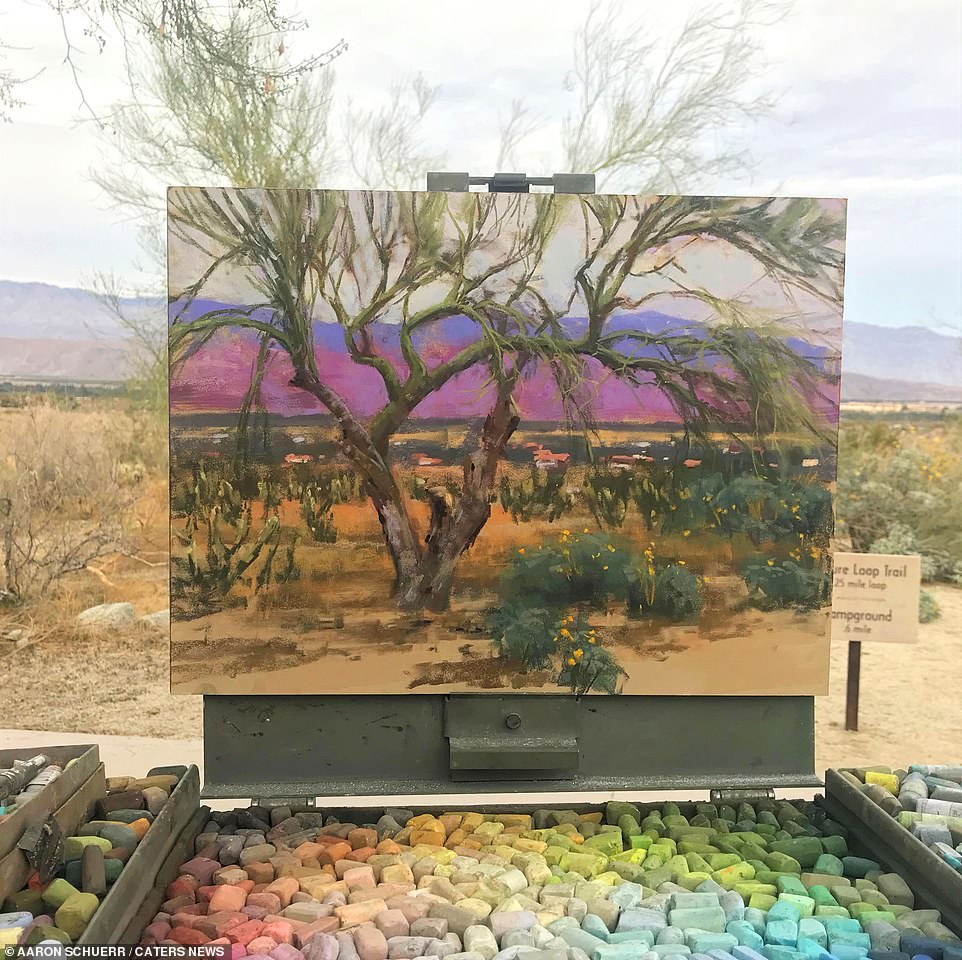 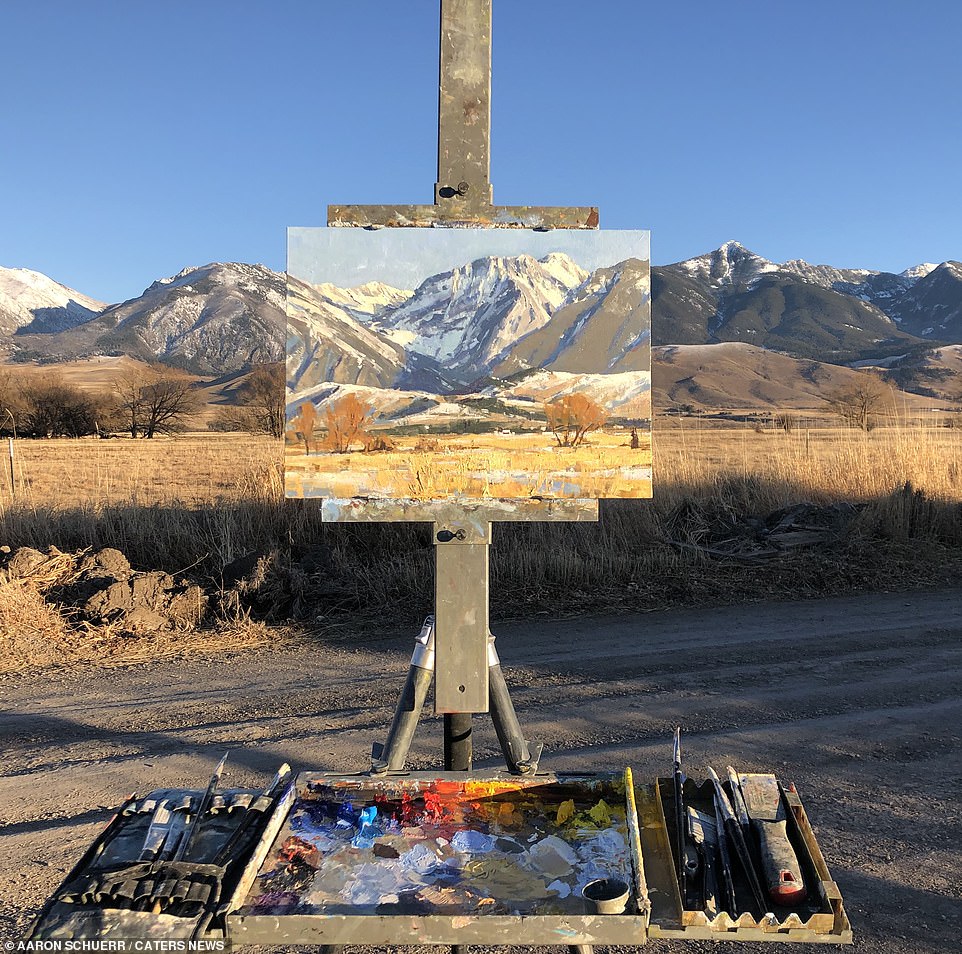 Schuerr’s representation of Sacred Valley, California, shows his painting blending into the background of the toasted grass and white mountaintops 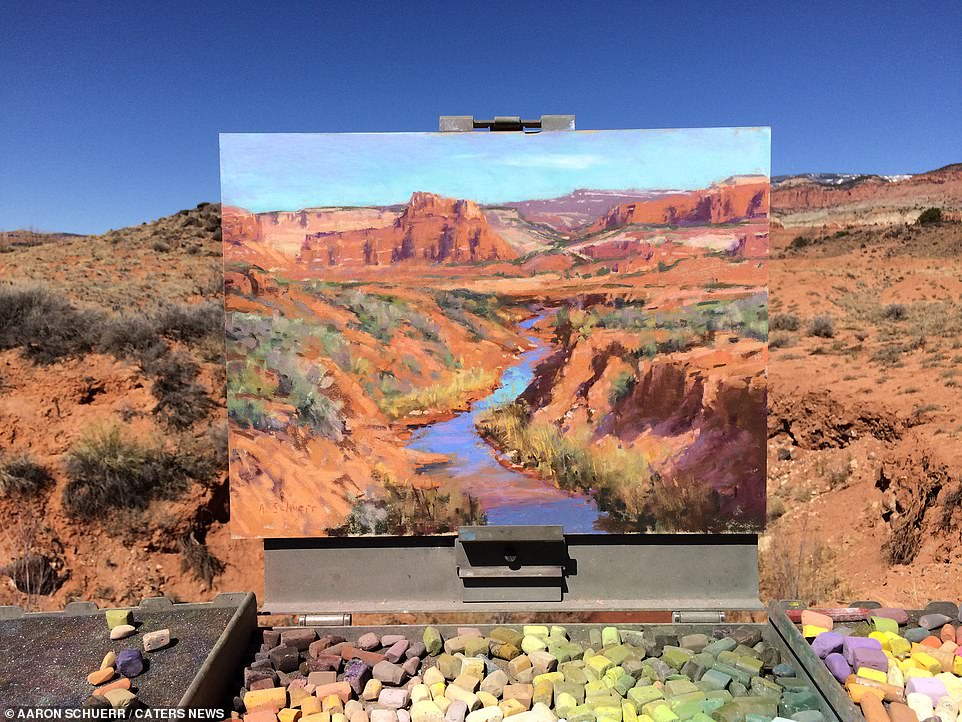 A photograph of Schuerr’s canvas creation shows the burnt river banks and mountain slabs at an unknown location, blending effortlessly into the actual scene 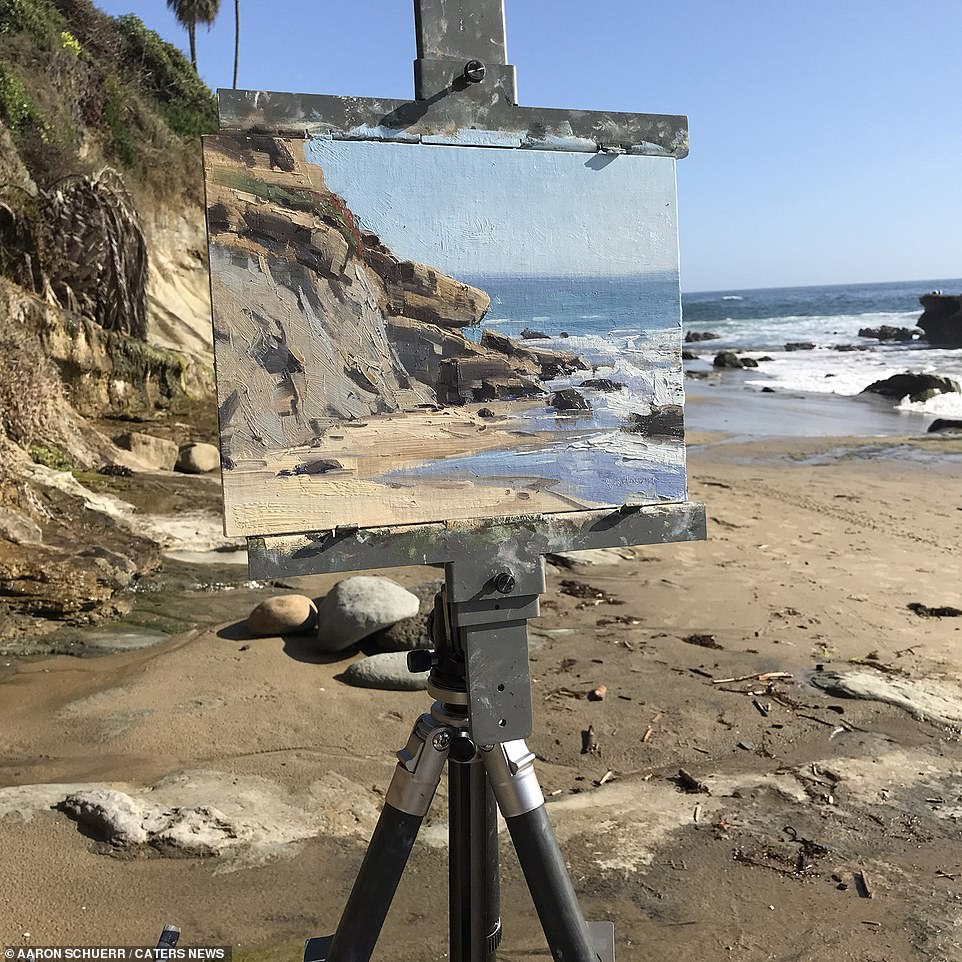 A beach photograph of Laguna Beach, California is barely interrupted by Schuerr’s painting standing on an easel in the centre of the shot 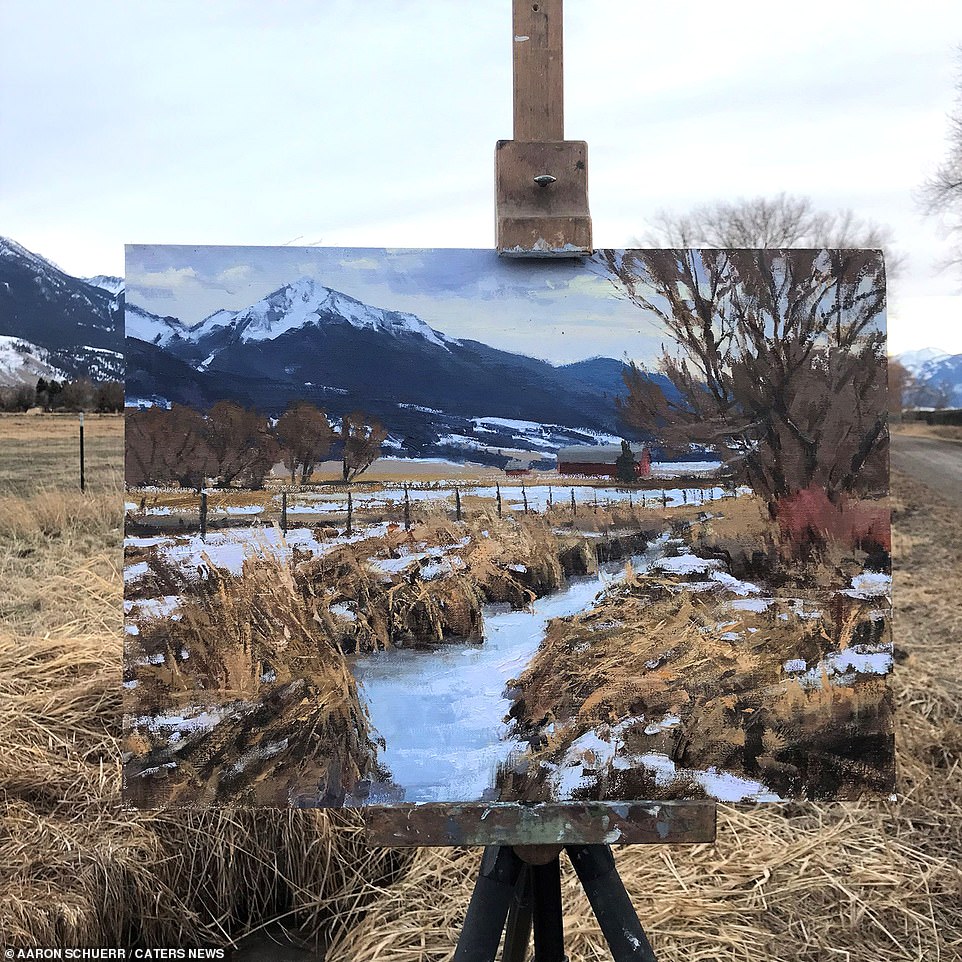 A photograph of Schuerr’s representation at an unknown location in America shows the broken grass around a near-frozen river, textured to make it blend effortlessly into the actual scene 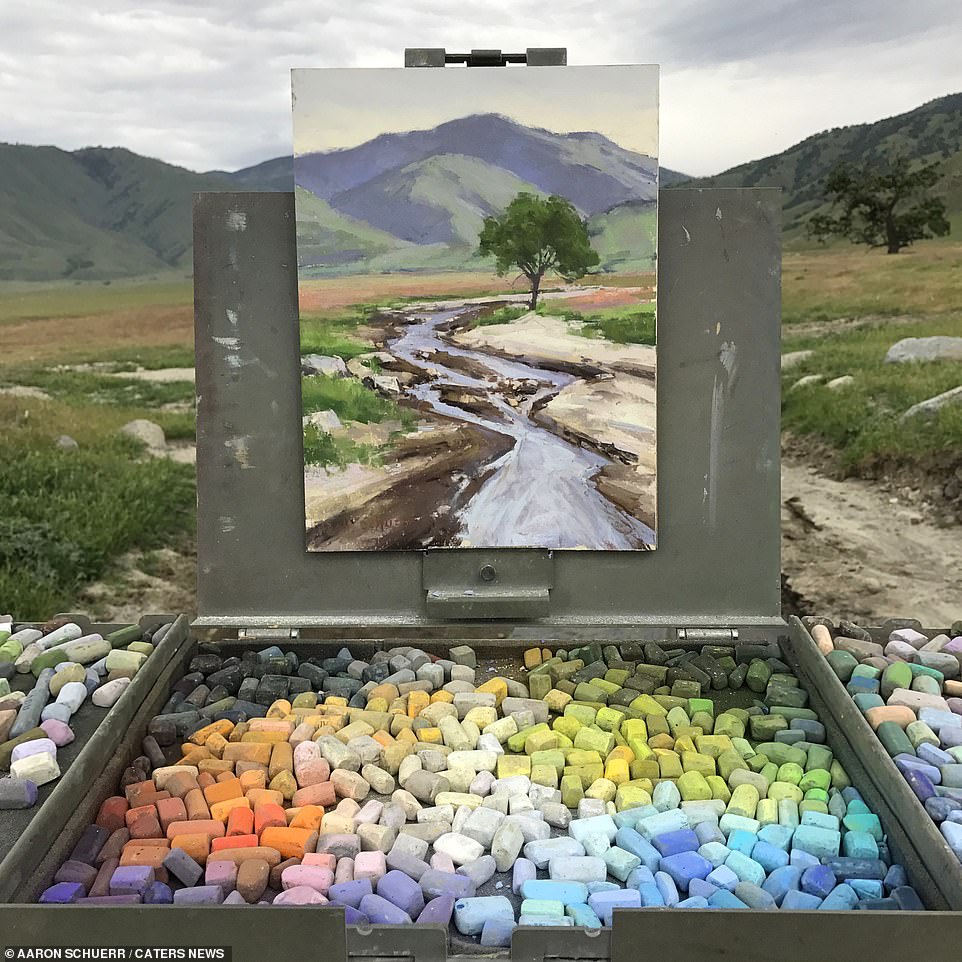 A photograph shows a painted mountain scene in the midst of the landscape from which it was created, with the two blending together effortlessly 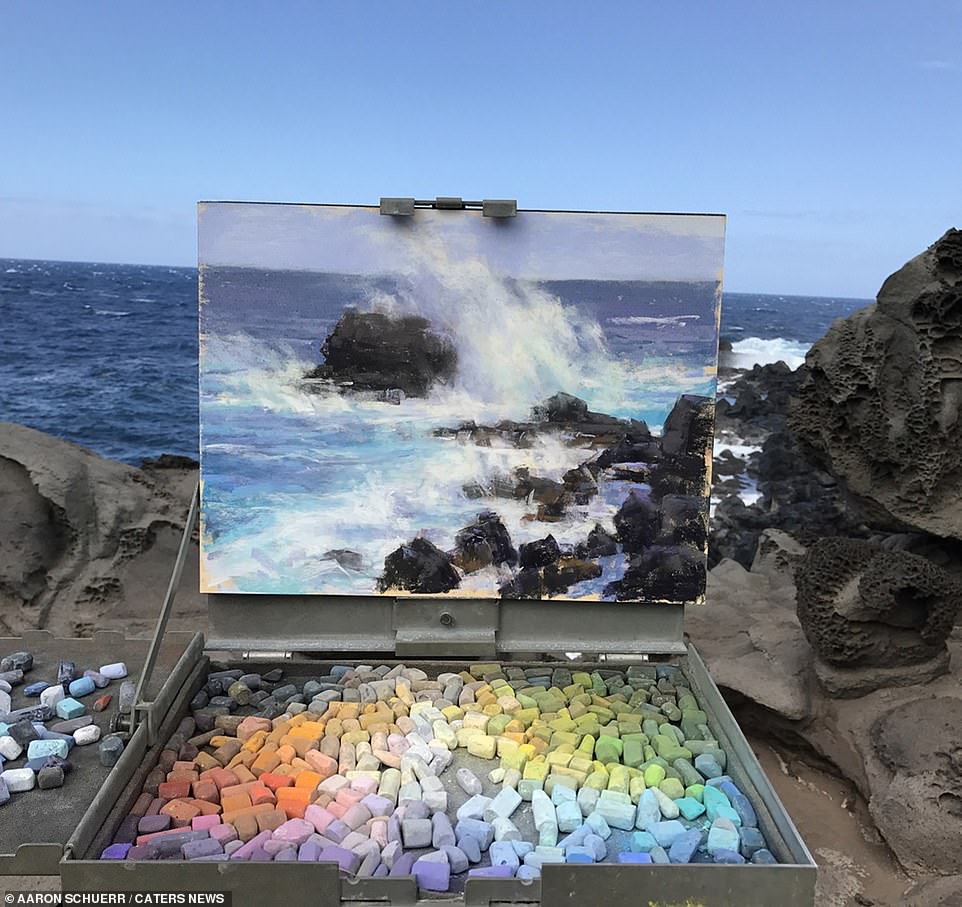 Waves crash against outlaying rocks on the painting, and in real life, in this picture of Schuerr’s pastel creation at an unknown location 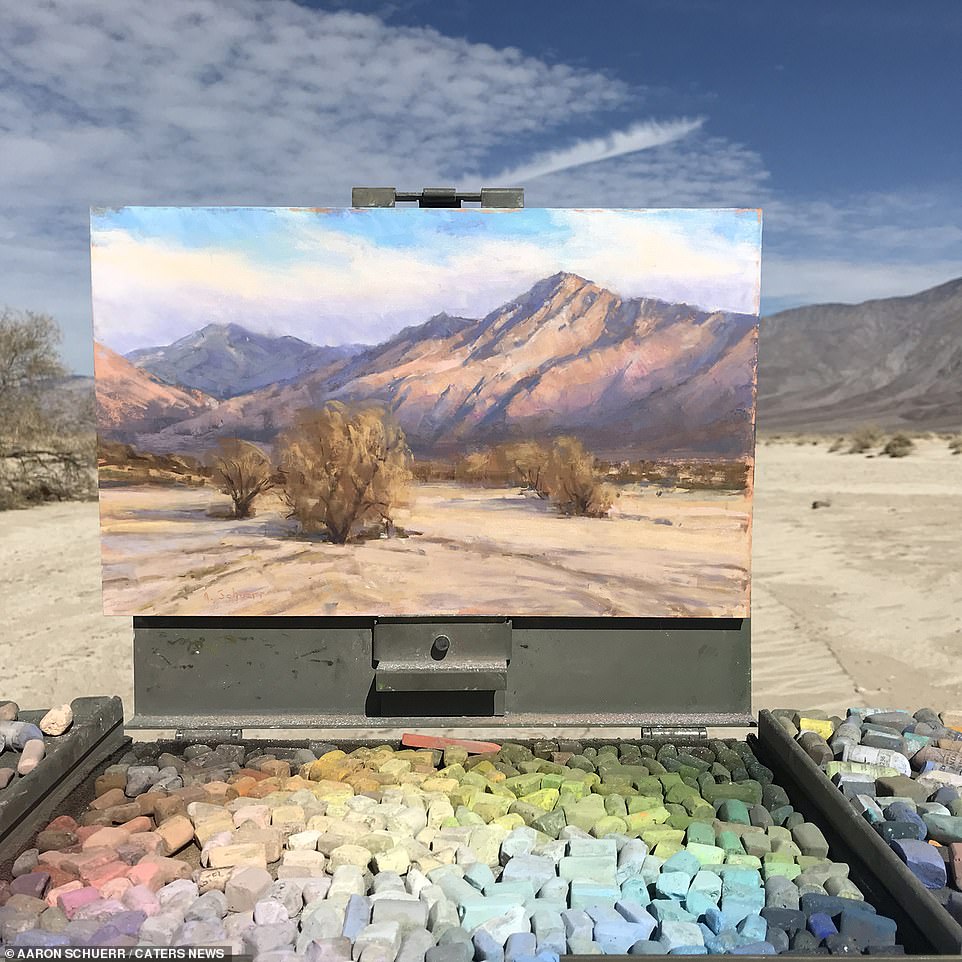 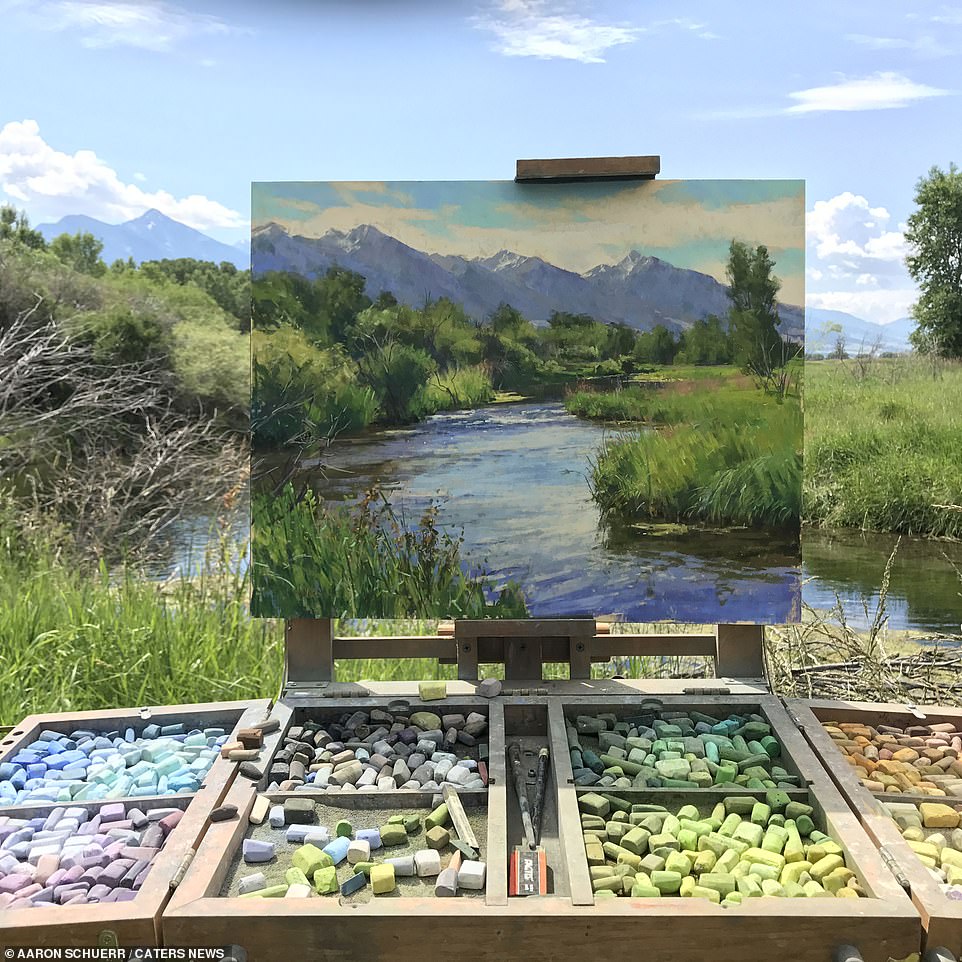 A range of green pastels sit in Schuerr’s palette in front of his picture perfect representation of the subject landscape, at an unknown location in America 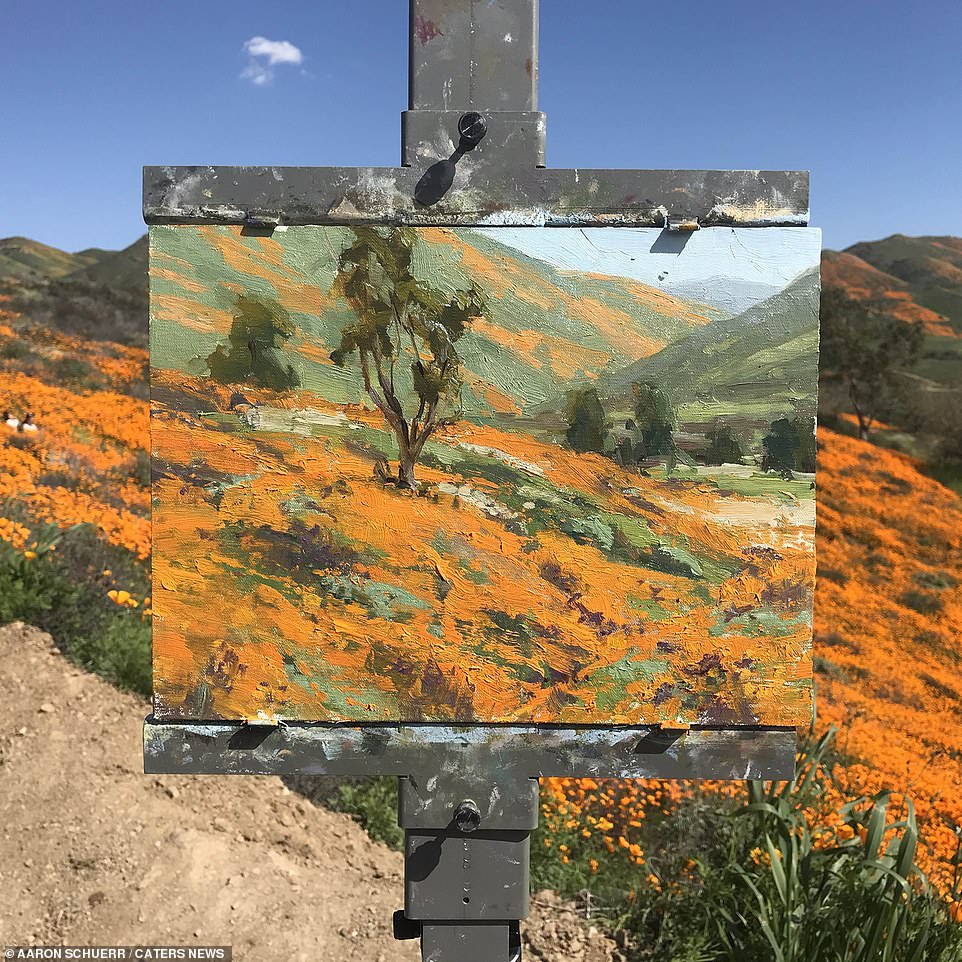 An oil painting stands in front of its subject landscape at an unknown location in the US, blending effortlessly into the background 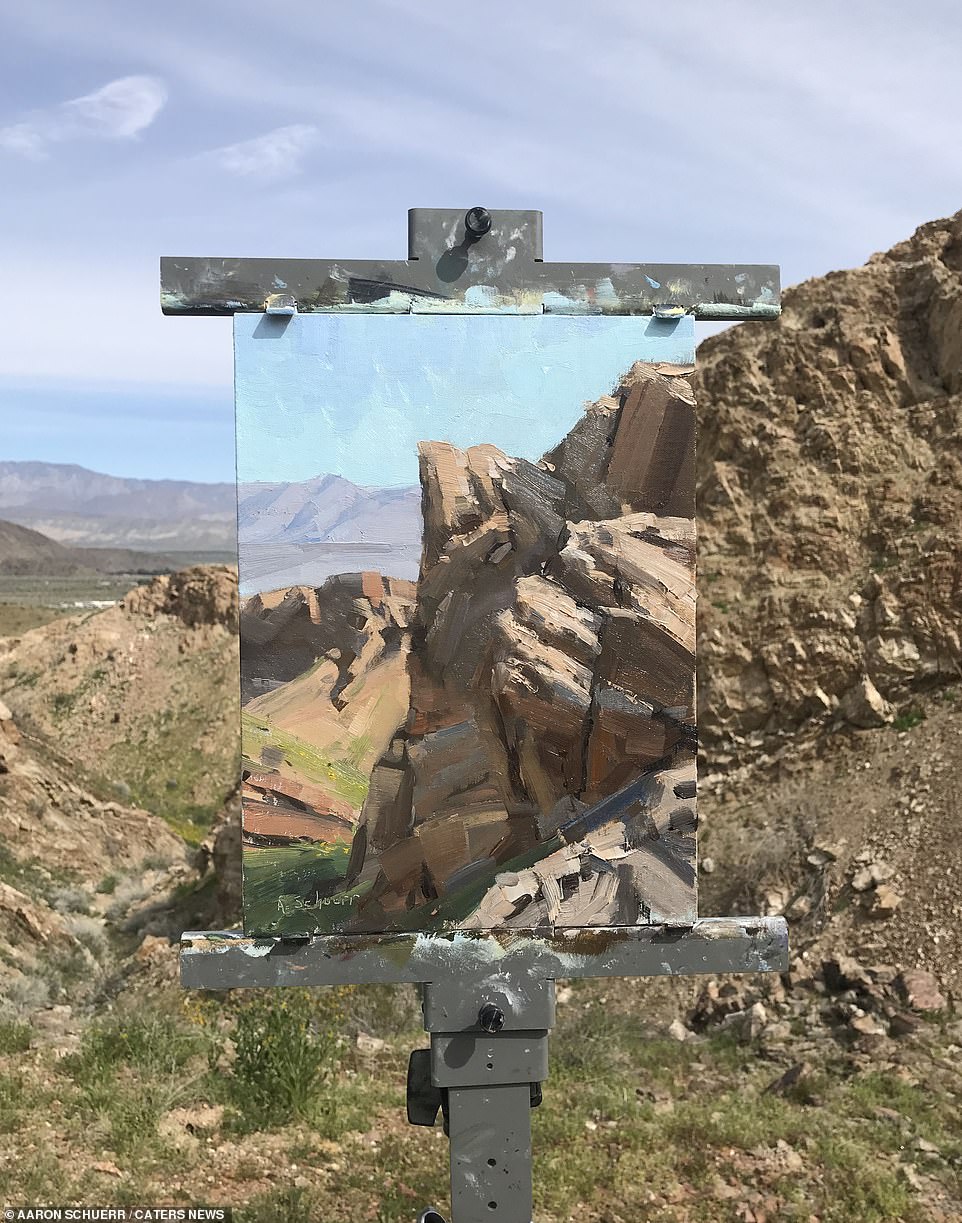 A painting of a rocky cliff stands on an easel in front of Schuerr’s subject cliff, effortlessly blended, at an unknown location in America 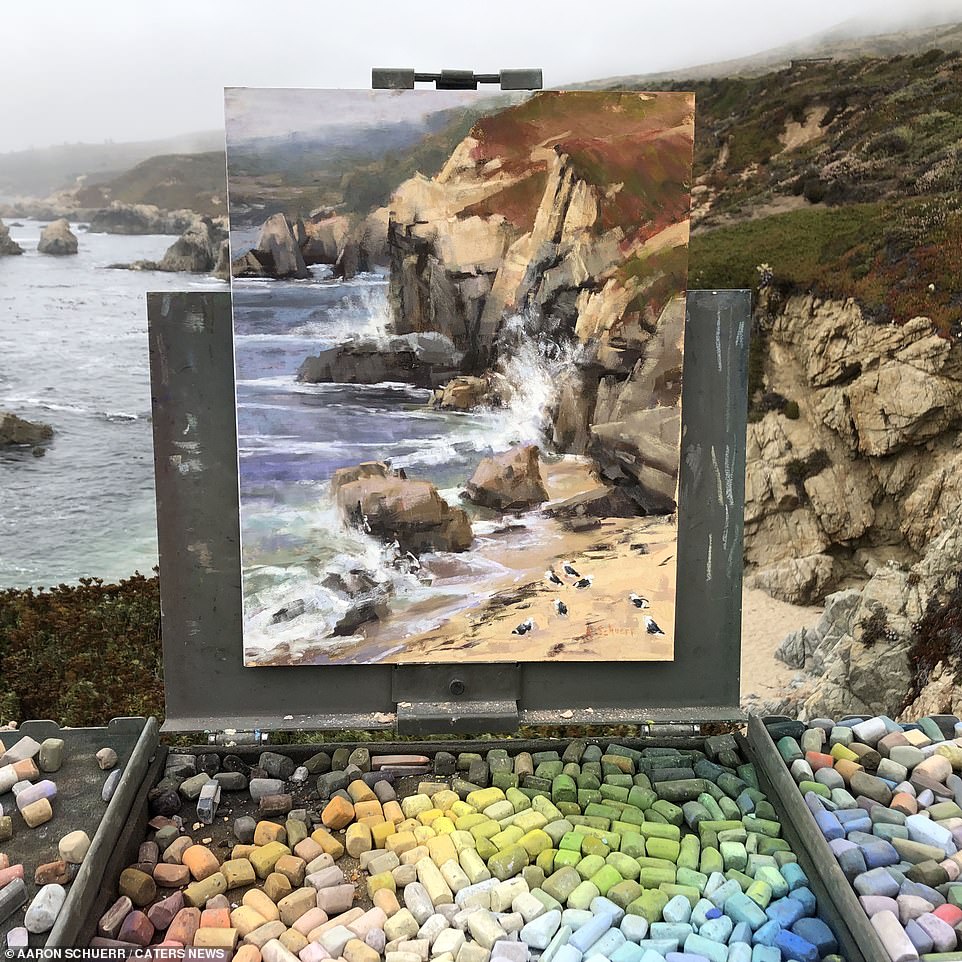 Waves crash and ride up a cliff face in America in this pastel image created by Schuerr. The only way to tell the two apart would be to remove the easel 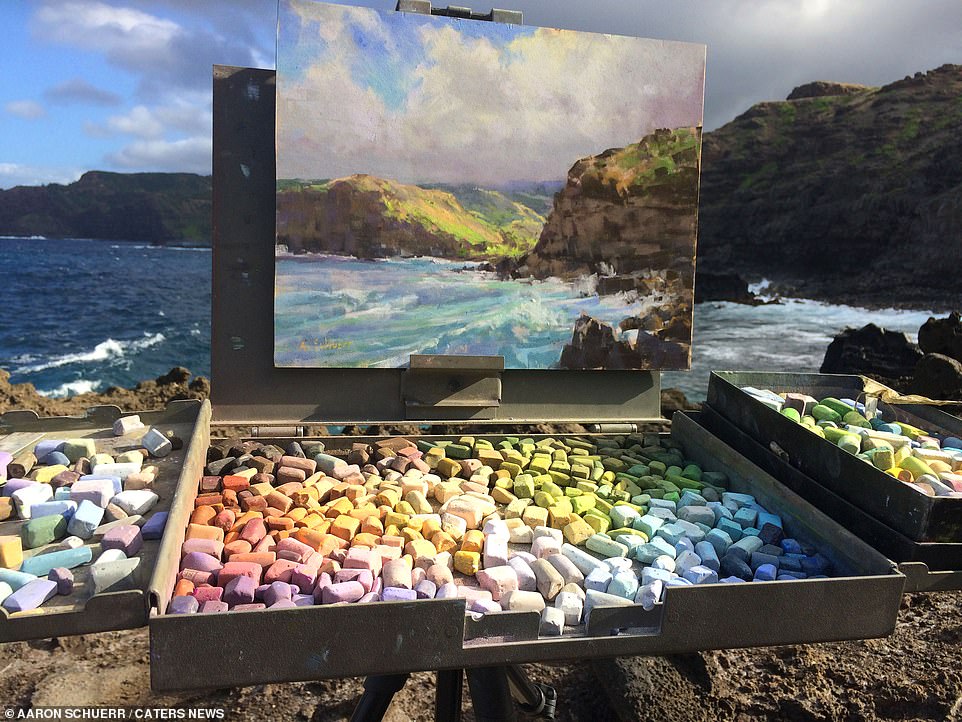 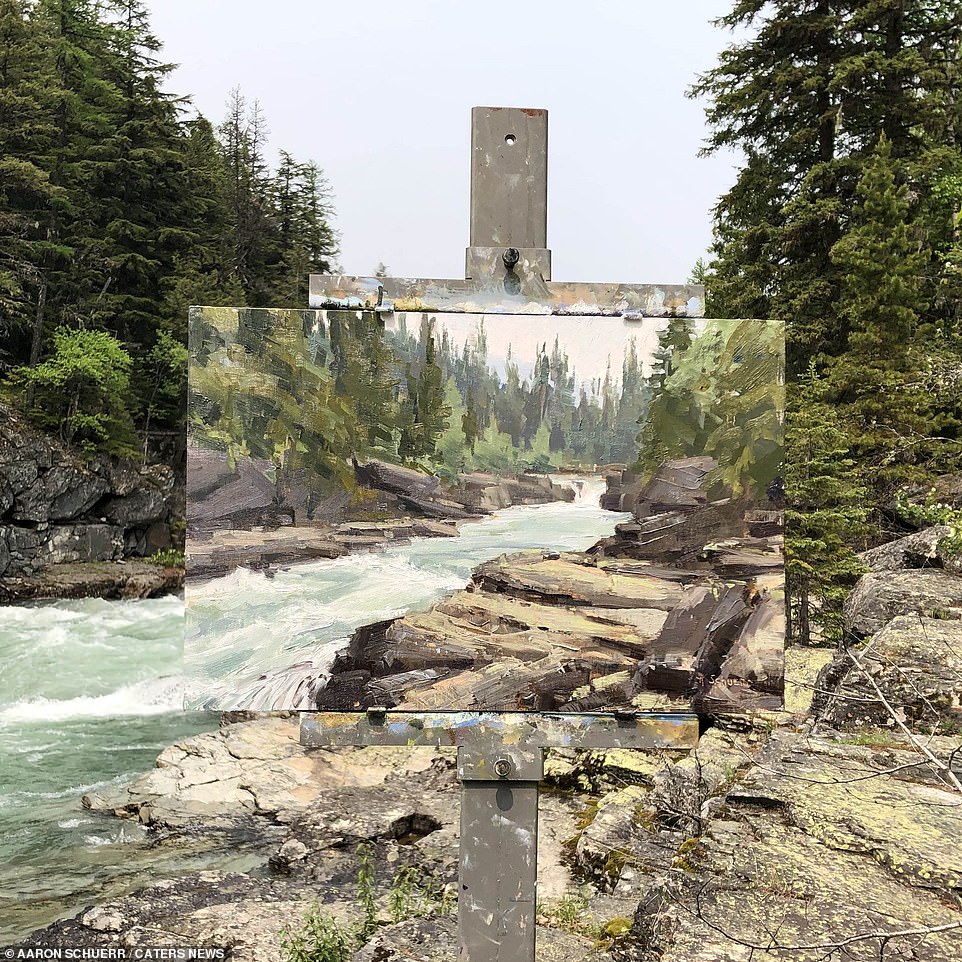 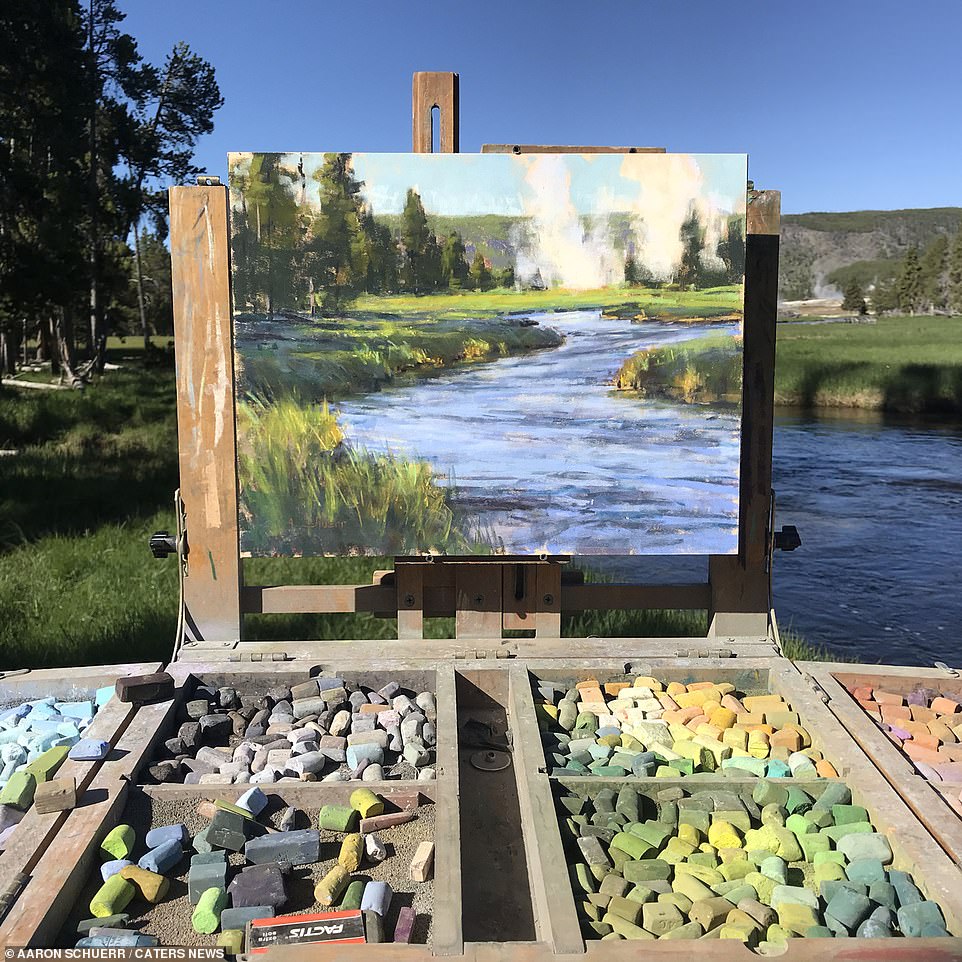 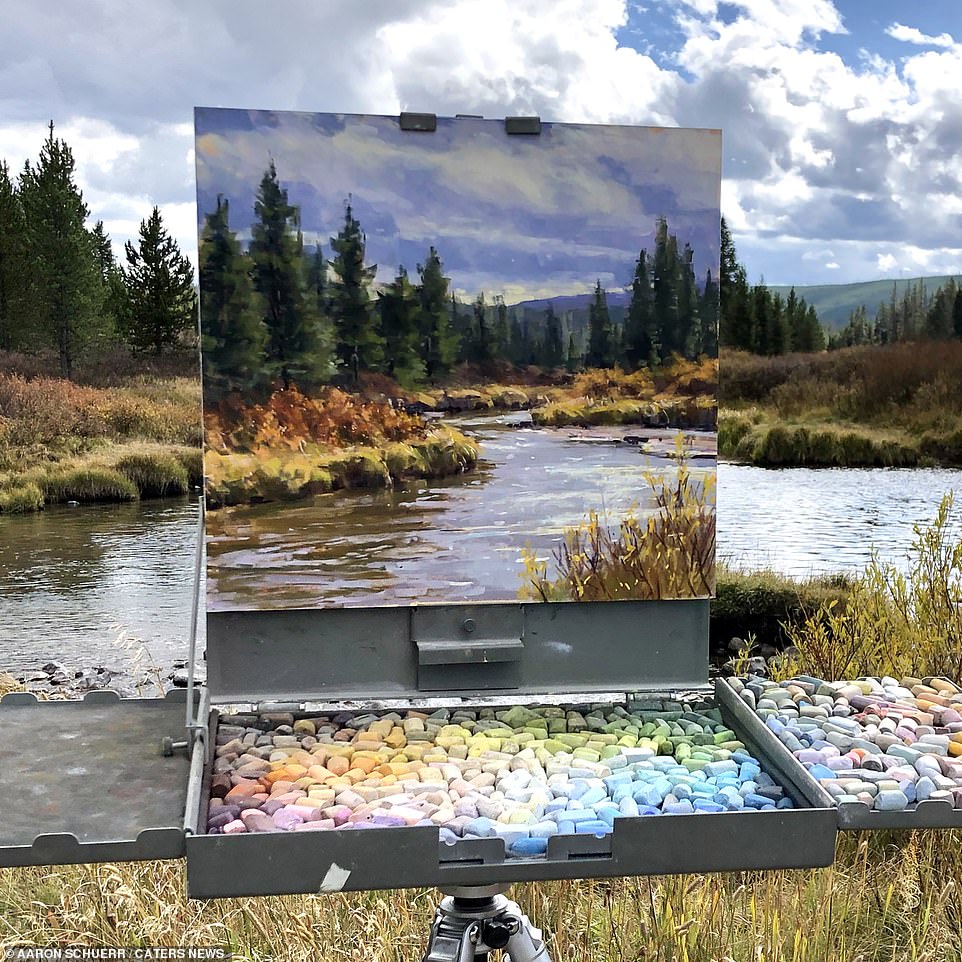 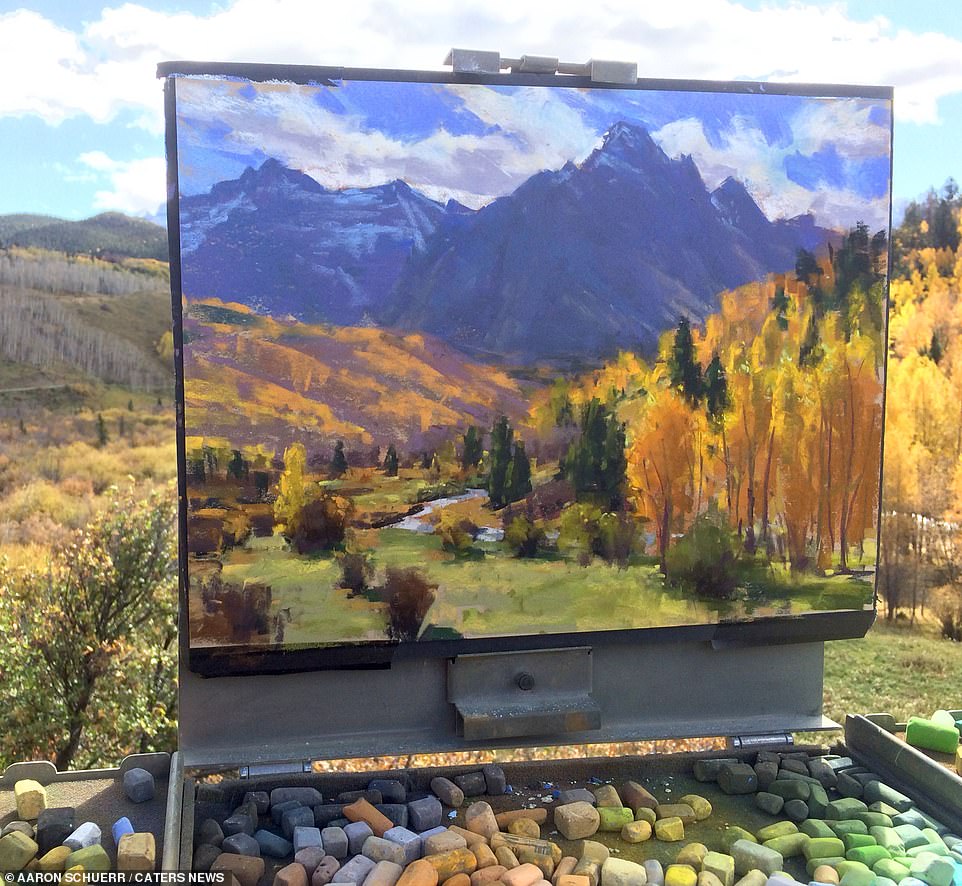 A photograph shows Schuerr’s representation of a pine forest to the right of the foreground, and an ice capped mountain range in the background, blending effortlessly with the scene it was taken from 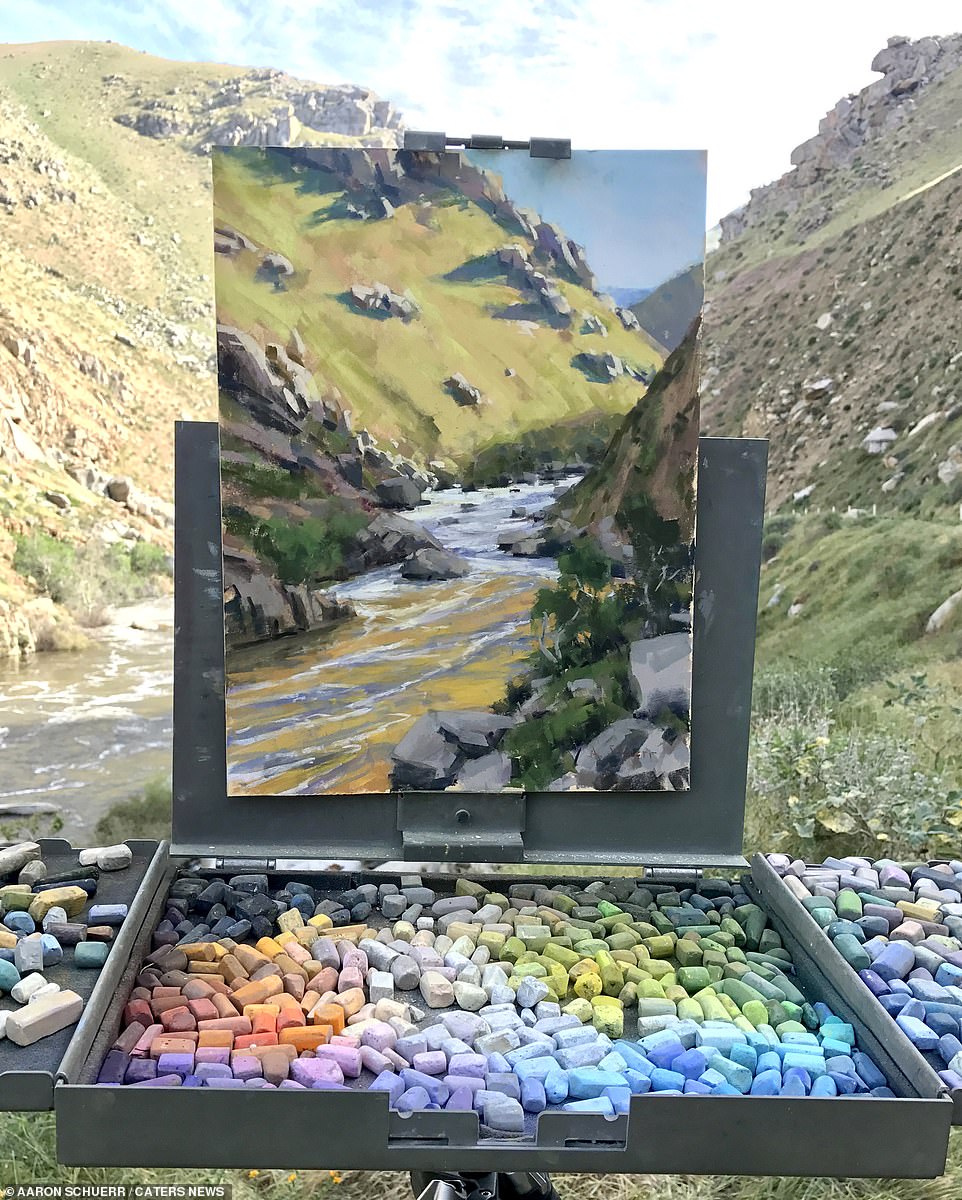 A photograph shows Schuerr’s representation of a river riding through the centre of two hills, blending effortlessly with the scene it was taken from