Macau gambling king Stanley Ho, who built a business empire from scratch in Macau becoming one of Asia’s richest men, has died at the age of 98, his family said on Tuesday.

Known as the ‘godfather’ of Macau’s casinos, Ho was instrumental in turning the semi-autonomous city from a sleepy Portuguese outpost into the world’s biggest gambling boomtown, even larger than Las Vegas.

He fathered at least 17 children from four different woman he called his ‘wives’. He is survived by 15 children and three of his ‘wives’.

Speculation about how his vast fortune would be divided among his children has long occupied Hong Kong’s tabloid media.

The flamboyant tycoon, who loved to dance and advised his nearest and dearest to shun gambling, headed one of the world’s most lucrative gaming businesses through his flagship firm, SJM Holdings Ltd, valued at about $6 billion.

Ho claimed to have never wagered a bet, even while his casinos continued to rake in billions in revenues annually.

Stanley Ho, the ‘godfather’ of Macau’s casinos, was instrumental in turning the semi-autonomous city from a sleepy Portuguese outpost into the world’s biggest gambling hub.

Ho’s company took a hit alongside its competitors after China’s President Xi Jinping launched a high-profile corruption crackdown in 2014, triggering a dramatic decline in high-rollers to Macau.

Gaming revenues bounced back until earlier this year when the coronavirus pandemic emptied casino floors and hammered the industry.

Most operators, however, including SJM, have ample cash reserves built up from the boom years to weather a prolonged downturn.

Ho oversaw the transformation of once-sleepy Macau into the world’s biggest casino centre, outpacing the United States’ Las Vegas strip, and held a monopoly until 2002 when the enclave licensed five other operators to run casinos.

‘In Hong Kong, Dr Ho had been someone who carried a lot of weight, was highly respected and cherished Hong Kong … (We) hope to follow our father’s footsteps and carry on the responsibility of giving back to the society,’ his daughter Pansy told media.

‘My father will live in our family members’ hearts forever and the hearts of all the people who benefited from him and were encouraged by him,’ she added.

China’s state-run CCTV described Ho as a ‘patriotic entrepreneur’, and Bloomberg estimates his family empire is worth some $14.9 billion, taking into account the business ventures of other family members, some of which run separate businesses. 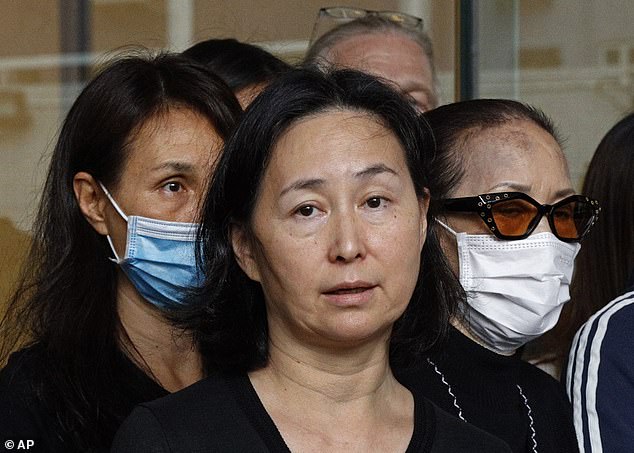 Ho’s daughter Pansy announced her father’s death to the media on Tuesday, saying she and her siblings ‘hoped to follow our father’s footsteps’ 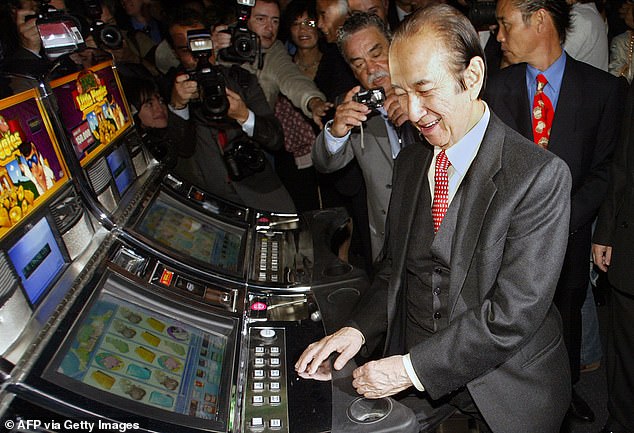 Ho said he had never wagered a bet, even while his casinos continued to rake in billions in revenues annually. Pictured: Stanley Ho in Macau, 2006, posing for the cameras at the opening of a new casino

‘The market is expecting … a scramble for inheritance. Under these circumstances there might be changes in company ownership, with some shareholders increasing their stakes,’ said Kenny Ng, a Hong Kong-based analyst at brokerage Everbright Sun Hung Kai.

The deal increased Pansy’s control over SJM and put the alliance’s influence at SJM ahead of Angela Leong, the casino operator’s co-chairman and current wife of Ho.

‘Investors are keen on SJM in anticipation that it will become more aggressive in its business approach on the back of stronger control of the company and closer ties among its major shareholders,’ said Steven Leung, a sales director at UOB Kay Hian. 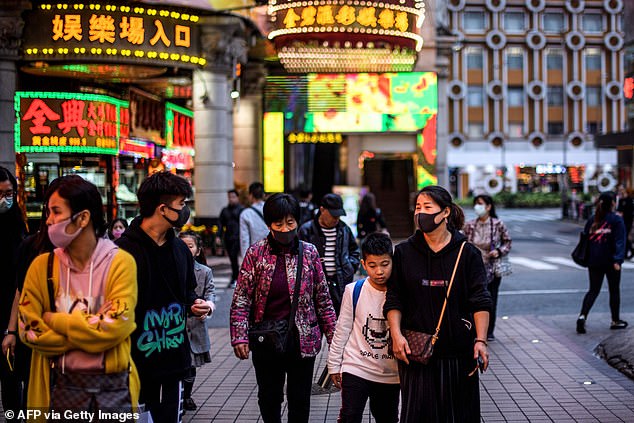 Pictured: Pedestrians wearing face masks walk along a pavement in Macau past casinos which line the streets in the world’s biggest gambling hub, January 2020

Born in Hong Kong, Ho had four wives and 17 known children. He was forced to restructure his business after a legal battle erupted within the family in 2012 over the family fortune – which Forbes pegged at $2 billion two years earlier.

The holding company STDM has stakes in everything from luxury hotels to helicopters and horse racing. Analysts do not expect Ho’s death to have an impact on day-to-day operations.

SJM is Macau’s oldest gambling company. Ho spearheaded what is known in Macau as the junket VIP system, whereby middlemen act on behalf of casinos by extending credit to gamblers and taking responsibility for collecting debts.

Who was Stanley Ho?

While many of Hong Kong’s tycoons have rags to riches backstories, Stanley Ho initially had a gilded start to life.

He was the great-nephew of one of Asia’s first tycoons, Robert Hotung, an influential Eurasian businessman and philanthropist who was among Hong Kong’s wealthiest individuals at the turn of the 20th century.

But Ho’s family fortunes collapsed during the depression years, and when World War II came he fled to Macau virtually destitute.

The war allowed him to make his first fortune – smuggling luxury goods into China from Macau – before securing the only gaming licence in the then-Portuguese colony in 1962.

He also added to his wealth through a property and shipping empire. 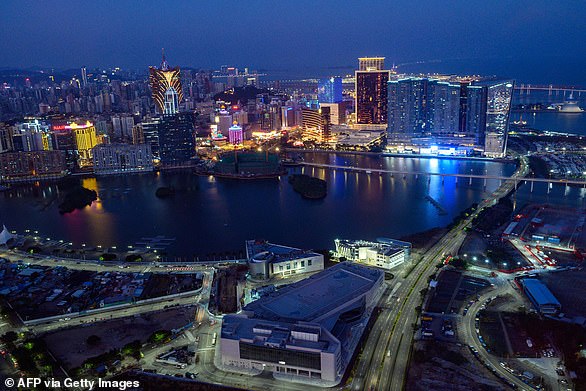 Macau is the world’s largest casino town, and is even bigger than Las Vegas, largely due to Stanley Ho’s business ventures

A flamboyant entrepreneur and keen ballroom dancer, Ho first married in 1942 but subsequently had three other partners with whom he had children.

Local media said it was unclear whether or not he had married all the women he called his ‘wives’.

Ho said he had never wagered a bet, even while his casinos continued to rake in billions in revenues annually.

Like many of Hong Kong’s tycoons, Ho was reluctant to retire and only officially stepped down from SJM in 2018 at the age of 96, handing over the reins to his daughter Daisy and Angela Leong, his fourth ‘wife’.

One of his sons, Lawrence, runs rival casino and hotel operator Melco International in Macau.

In 2015 his nephew Alan Ho spent 14 months in jail on charges linked to a prostitution racket that was uncovered at the company’s flagship Hotel Lisboa. 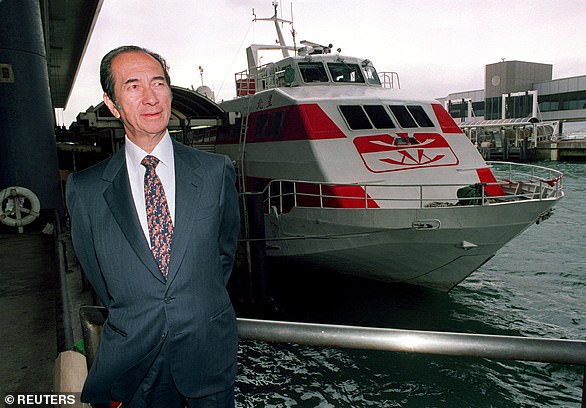 Ho had been keeping a low profile after a serious fall in 2009 at the age of 87 which left him requiring brain surgery.

Pansy was named Hong Kong’s richest woman by Bloomberg in 2018.

Earlier this year Ho’s youngest son, 25-year-old Mario, shelled out HK$500 million (US$64.4 million) on a house at one of Hong Kong’s most prestigious addresses, the South China Morning Post reported.

Hong Kong boasts one of the highest concentrations of billionaires in the world, but the city is also shot through with inequality, fuelled by a lack of housing, sky-high rents and low wages for blue-collar jobs.