ASK TONY: How could BA charge me £1,800 extra to rebook axed flight?

In September 2019, my wife and I booked with BA to fly to San Jose, California, in March 2020 to visit our grandchildren.

We paid £2,617 but our flights were cancelled because of Covid. We rebooked for last December but this was also cancelled.

BA suggested I take a voucher so I could re-book when it started flying again. Big mistake!

It then cancelled the route altogether, so I asked for my money back. By this time BA had held on to our money for 18 months and has not yet supplied what I paid for.

BA is refusing to refund a couple the £2,617 cost of tickets to California after their flight was cancelled due to the pandemic and want an additional £1,800 to re-book on the same route

It has now reinstated the route, to start again in September, but if my wife and I want to travel in the same seats/cabins again (World Traveller out, Business back) I’m required to pay an additional £1,800.

I asked if I could instead fly to San Francisco for the original cost and pay the connection to San Jose myself, but BA said no.

So, again, I asked for my money back. But it said no.

I’ve travelled millions of miles with BA. I’m not sure who is being unreasonable here but it’s not me!

Tony Hazell replies: I’ve got nowhere with your complaint but I’ve decided to publish this letter because I feel that BA is in the wrong here.

And I suspect many readers will be curious about these BA vouchers.

BA says there are two salient points. First, that the vouchers cover the cost of the flight, not necessarily the route or the class of travel.

So yours are worth £2,617 to travel anywhere. Fair enough.

Then there comes the issue of who originally cancelled. If BA cancelled, then you were offered the choice of a refund, vouchers or rebooking.

If you cancelled first then you must take vouchers. BA cancelled your initial flight so you could have claimed a refund, but, rather sportingly, you opted for the vouchers.

However, the airline argues that this is a once-and-for-all decision — so when you take them you are stuck with them.

It adds that the main problem with replicating your flights is that you made the original booking during a sale period and got an extraordinarily good deal.

These vouchers are valid until 2023 so the best I can suggest for now is that you look out for the next sale (in fact, one began recently) and dive in quickly. The vouchers cover any route and can be used as part-payment.

Apparently, travelling via San Francisco was do-able but you would have had to pay more.

However, I don’t believe BA should be able to hang on to anyone’s money for what could be more than three years – and let’s not forget you did it a favour by agreeing not to press for a cash refund in the first place.

And I am not alone. The Competition and Markets Authority last week revealed that BA (along with Ryanair) is under investigation because it ‘refused to give refunds to people that were lawfully unable to fly’.

It remains to be seen what happens here, but this may eventually be another route to getting your money back. 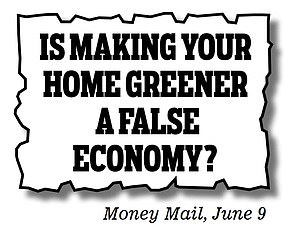 Every week Money Mail receives hundreds of your letters and emails about our stories. Here are some of the best from our feature about the hidden costs of eco-proofing your home:

My ‘chocolate box’ house was built in 1844, and on paper it’s got no hope of passing these Energy Performance Certificate (EPC) thresholds.

If you can’t get a mortgage on it in the future, I suppose it will get knocked down and a new-build will be constructed in its place.

The biggest con for smaller houses is cavity wall insulation. I had it done and it made absolutely no difference to my heating costs.

I never had a problem before — the house maintained a reasonable temperature the whole year round.

We’ve put up with poorly insulated homes for years because the cost of insulation far outweighs that of the heat lost, as your article points out.

Very few homes have mould, but wall insulation can increase the chance of it developing.

One of the EPC system’s absurdities is that it does not cost just a few pounds to upgrade lighting, because low-energy bulbs don’t count unless they are in fittings that only take low-energy bulbs. You end up having to replace them all.

I don’t know how the elderly or those on smaller incomes are to afford all of these alterations. The Government’s agenda is ridiculous and unrealistic.

A tradesman has offered to strip and insulate my flat roof for £10,000. Where am I to find that sort of money when I’m living off a state pension?

I am being chased for £713.61 by debt agency Moorcroft on behalf of Virgin Mobile. This is apparently for a SIM contract of which I know nothing.

I have never taken out a Virgin mobile contract nor received any emails, texts, letters or telephone calls about this.

I spoke to Virgin and was directed to the fraud department but have not had a reply.

Today, I’ve tried five times to speak to someone at Virgin but have been cut off each time.

Tony Hazell replies: Virgin swiftly cancelled the account and removed the debt when I got in touch. It has also contacted you to apologise.

This seems a case of your identity being used fraudulently to open an account.

It may be worth requesting your credit file from agencies such as Experian, Equifax or TransUnion.

I took out finance with Barclays to buy a £1,089 furniture set from The Range but later cancelled my purchase.

Yet the bank still took the first £91.50 payment in May. When I called, an adviser told me they were unaware the order had been cancelled.

Barclays needed certain documents from the retailer before it could cancel your agreement, but recognises it should have asked The Range for these when you first got in touch.

It has now refunded the payment, cancelled the plan and paid an extra £50 as a gesture of goodwill.

Am I being overcharged for my TV Licence? I pay in monthly instalments and wrote five cheques for £13.50 but the cost is now going up to £20.57 a month for the rest of the year.

You joined the 75+ payment plan in December to spread the cost of your licence between August 1 and July 31.

TV Licensing says you have not been overcharged but are just £17.04 ahead of your payment schedule. It is writing to explain this.

I have been trying to trade in my iPhone X with Vodafone so I can get a discount on my bill.

But it won’t send me a trade-in bag so I can post back the phone, and my bill is higher than it should be.

Vodafone apologises and has now applied the £15 discount as promised. It has also allowed you to keep the phone as a gesture of goodwill.

Before my husband died in May he had been trying to cancel his service agreement with Currys PC World.

Since then I have been back and forth with the retailer but it keeps sending cheques in my late husband’s name.

Currys has apologised for the error and distress. A cheque for £68.67 has now been issued in your name.

Two withdrawals were made on our NatWest account to Enlarge Memory for £1 and then £39. My wife and I had no idea who this company was or how it was able to take our money.

NatWest said my wife’s card number had been used to set up a direct debit, and a further £39 was about to be taken.

The bank sent my wife a new card but wouldn’t give any assurance of a refund of the £79.

Tony Hazell replies: I suspect your wife may have fallen for a free trial scam whereby a firm asks for card details to cover postage but the small print signs you up to a monthly direct debit.

NatWest has refunded your money and made sure no more will be taken.

A spokesman says: ‘Customers should always be cautious when signing up for free trials as when the free trial expires, they can often result in payments being taken.’

I agree. But banks should also take greater steps to monitor direct debits being set up to dodgy overseas companies. It’s not rocket science – just try a Google search.