I wrote to NS&I on May 11 asking to cash in my mum’s Guaranteed Growth Bonds.

I enclosed an original power of attorney (POA), fully certified on each page and registered with the Office of the Public Guardian.

Mum is 90, has dementia and is deaf. She has been admitted to specialist residential care costing £4,660 per month. Her bonds are critical to meeting these costs.

The POA was returned to me on May 12. I was then told it hadn’t been scanned on to the system, and that there was a 17-day delay between post arriving and being processed.

On May 17, I received a letter saying mum’s bonds had been rolled over into the next cycle of investment.

I called, to no avail, as there was still no record of my POA on the system. I tried again on May 25. I have also written to senior people within the company, including the chief executive.

On May 27, I received a letter suggesting I hadn’t sent an original certified copy of my POA when in fact I have sent three.

Tony Hazell replies: You were clearly very angry and frustrated by the time you contacted me — and I’m not surprised.

Having to move a parent into care is exceptionally stressful, and the last thing we need are organisations making life more difficult. Yet some seem to go out of their way to create obstacles for those helping relatives via a POA.

Personally, I am sick to the back teeth of Barclays smugly suggesting I use its phone app to speed up transactions when it won’t let POAs use it.

Instead, I am stuck with its clunky website or must phone the appalling call centre, which makes my blood boil just thinking about it.

NS&I admits it somehow lost track of your POA. You sent another on May 25.

Then the original was found but some jobsworth decided it was not properly certified because the solicitor did not give their address and contact number on each page.

You sent a third copy which was rejected for the same reason. However, your solicitor told you that it was correctly signed and stamped.

When your case was escalated NS&I deemed the POA acceptable and the £12,012 was paid. NS&I has apologised and says that you did not receive the level of service you were entitled to expect.

It admits it should have accepted the POA in the first instance, or written explaining why it could not be accepted.

When you explained that the funds were needed for your mother’s care home fees, it says this should have been dealt with as a priority. NS&I has sent £225 as a goodwill gesture. 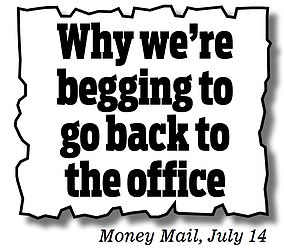 Every week Money Mail receives hundreds of your letters and emails about our stories.

Here are some regarding the young workers desperate to get back into the office:

The sooner people get back into the office, the sooner productivity will increase.

It also helps you learn how to deal with people. A lot of customer service staff could benefit from this skill.

I hope that if there is a return to the office we will be able to retain a casual dress code, as office workers seldom need to see clients.

Everyone will have to go back to the office. How can you train a new employee when they are stuck at home?

I dread going back to the office. I’ll waste three hours, and money, travelling to do the same job I do at home. Unfortunately, my boss wants us all back as soon as possible.

I have three family members who have been working from home since March 2020.

Two of them are in new jobs and have never met their colleagues. People are mixing in other ways already. It doesn’t make sense.

Let graduates and apprentices go back to the office. They need to be monitored to improve their productivity. Older professionals are more likely to enjoy working from home.

If a company can save money without incurring any losses, then surely it will do so. Reducing costs on office space is the simplest way to cut outgoings and, in some cases, increase productivity. Welcome to the 21st century!

We are pensioners in our 80s who each received an M&S jumper for Christmas from our daughter who lives 150 miles away. Unfortunately, they were too large.

As all non-essential shops were closed in Northern Ireland, and because of our age, we did not feel able to return them.

On May 11, we drove 30 miles to M&S Ballymena where we were told we should have returned the garments in January.

The assistant gleefully told us that they had been open as they operated a food hall.

We said that this would have been a non-essential journey and police were regularly patrolling and checking people’s reasons for travelling.

A manager offered less than £2 per garment. I would rather give them to a charity shop.

I have twice called customer services to complain and been promised my calls would be returned, but to no avail.

Tony Hazell replies: Well doesn’t M&S have a high opinion of itself! We were being told earlier this year not to travel unless it was essential.

I hardly think returning a jumper is essential, yet hoity-toity M&S Ballymena disagreed.

Sanity has prevailed. M&S has now apologised, admitting it ‘fell short of our usual high standards of service’.

You have received a refund and a goodwill gesture.

When I switched my broadband and phone to Sky earlier this year, I lost the landline number I have had for 50 years.

Sky says it cannot help and told me to try BT as it owns the number, but BT is not responding to my emails.

Sky was able to restore your number after all. A spokesman adds that this was lucky as a request usually has to made by the customer to BT directly.

To apologise for the service issues you’ve been given £75 compensation, three months’ free service and an extra £25 goodwill gesture.

A few months ago, you ran a story about the British Standards Institution’s code of practice that could help scam victims hold their bank to account.

I paid £102 for the document but did not receive a copy. I was then told I must download it but I can’t make it work.

The BSI says it has been in contact and emailed you a digital copy you can access.

My EasyJet prepaid currency card expired in March with a balance of around €438 (£375). I emailed the airline several times but have not received a refund.

Digital platform Omnio is responsible for managing the Euro Currency Card, which has now closed, on behalf of easyJet. Another firm, PayrNet Limited, looks after the funds.

Omnio blames the delay on a backlog of refund requests but confirms you now have your money back.

I bought a £729 washing machine from Currys and paid £25 for its installation service.

The installation was done incorrectly, causing the washing machine to leak and damage my cupboard and brand new carpet.

I have asked for compensation to replace these, but Currys has only offered £589, which is a fraction of this cost.

Currys says it will cover the cost of a new cupboard but will only pay to clean the carpet, not replace it.

A spokesman apologises for the damage as well as the level of customer service received. You will now receive £700, plus £50 as a gesture of goodwill.

I had insurance with CoverMore, and was told to pay the bill and claim back the money upon return to the UK.

Despite sending all the documentation required, I have not received any response.

Tony Hazell replies: I have been to the other end of the earth attempting to resolve your issue — CoverMore’s press office is in Australia.

Cover-More says it received your claim form on January 21 this year, but it wanted more details of your medical bills.

You felt you had provided all the information needed, yet the offer fell well short of your outlay. You said that Cover-More appeared to be offering you £184 on the £3,000 claim.

Both you and I concluded that the discrepancy was due to Cover-More staff struggling to convert from Ugandan shillings. There are currently around 4,900 shillings to £1.

Cover-More then agreed to accept your bank statements as proof. You provided these and your claim has been paid in full.