Assassin who killed 23 for Basque separatists Eta is now working for the RED CROSS, says her mother

Psychopathic TV serial killer Villanelle is described by her creator – thriller writer Luke Jennings – as ‘a spectral and elusive quarry, always one flawless step ahead’. Jennings says he also admires her ‘grim artistry’.

As fans of the BBC drama, now in its third series, are aware, Villanelle displays no remorse for her extravagantly sadistic ‘hits’. Played by Jodie Comer, the hired assassin employed by an underworld gang called The Twelve, becomes involved in an obsessive cat-and-mouse game with MI6 agent Eve Polastri, played by Sandra Oh.

The idea of the story came to Jennings – who was the Observer newspaper’s dance critic – when he tried to turn the ‘womanising and humourless’ genre of male thriller book heroes on its head.

So he invented Villanelle – real name Oksana Astankova – a ‘child of post-Soviet chaos, as brilliant as she was ferocious’. But only recently has it emerged that an inspiration for her was Idoia Lopez Riano, a green-eyed femme fatale who became the world’s most wanted female assassin in the 1980s while carrying out atrocities for Eta, the Basque separatist group.

Idoia Lopez Riano became the world’s most wanted female assassin in the 1980s while carrying out atrocities for Eta, the Basque separatist group

A sadistic penchant for luring police officers to bed, before gunning down their colleagues, got the disco-loving, tousle-haired killer the nickname ‘La Tigresa’.

Like Villanelle, she often paused to admire her reflection before executing her next victim. The similarities with Comer’s character are obvious, with Jennings himself saying: ‘Riano was a psychopath and completely without empathy.’

However, in a remarkable twist – one that even the imaginative Villanelle might never have come up with – Riano’s mother last night claimed that her daughter now works for the Red Cross. Speaking last week from her home in the tiny village of Villar de Ciervo near the Portuguese border, her mother, Mari Riano, 86, said she’s ‘proud’ of her daughter who has been ‘turning things around’. She said: ‘She speaks three or four languages and is throwing herself into the work. Idoia is with the Red Cross in Barcelona. Everyone loves her there.’

The contrast between Riano’s alleged humanitarian work and her previous role as a commando with Eta, whose violent campaign for independence left more than 850 people dead, is as sharp as her role as assassin was with her very normal childhood. As a youngster with piercing eyes and dark, tumbling hair, Riano was ‘just one of the girls’, says her cousin, Jose Antonio Lopez, adding: ‘She was pretty soft.’

That changed in 1980 when, through a boyfriend from the Basque town of Errenteria, the then 16-year-old Riano was recruited by Eta. She registered her first kill at the age of 20. 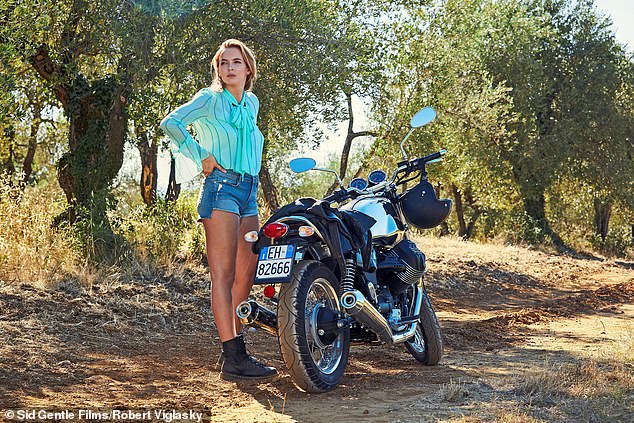 As fans of the BBC drama Killing Eve, now in its third series, are aware, Villanelle displays no remorse for her extravagantly sadistic ‘hits’

It was not long before her signature green eyes and curls of hair began to dominate newspaper reports and her face appeared on Wanted posters in bars across Spain. Her mother said: ‘She got involved with the wrong crowd. I can’t say why, it just happened.’

Displaying a natural talent for terror, Riano became a lieutenant in Eta’s Madrid cell. In 1986, she played a key role in the bombing of the city’s Plaza Republica Dominicana which killed 12 Civil Guards, and in another car bomb attack that left five Guards dead.

After fleeing to Algeria for several years, she joined a notorious commando unit which carried out attacks in Barcelona, Valencia, Alicante and Murcia, achieving a near mythical reputation for ruthlessness. Just as Villanelle lusts after her intelligence service agent pursuer Eve Polastri, so Riano developed a sexual obsession with the Civil Guard, cruising night clubs to pick up officers, only to assassinate their colleagues hours later. According to one report, she was said to straddle her police lovers while thinking: ‘I’d love to shoot the b****** in the mouth.’

The image of his daughter as a bed-hopping, merciless killer remains painful for Melchor Riano. Sipping a glass of local liqueur in the village square, he said: ‘I just want to leave the past behind. I can’t bring myself to talk about it.’

Villager Teodoro Reyes, 62, still recalls the unwanted attention that Riano’s crimes brought to Villar de Ciervo. He said. ‘I remember seeing her face on a poster at a local bus stop, in a line-up of eight or ten wanted ETA terrorists. We all knew the legend of La Tigresa who killed so many.’

In Killing Eve, Villanelle’s paymasters admire her skill as an assassin, but despair of her tendency to ignore orders. 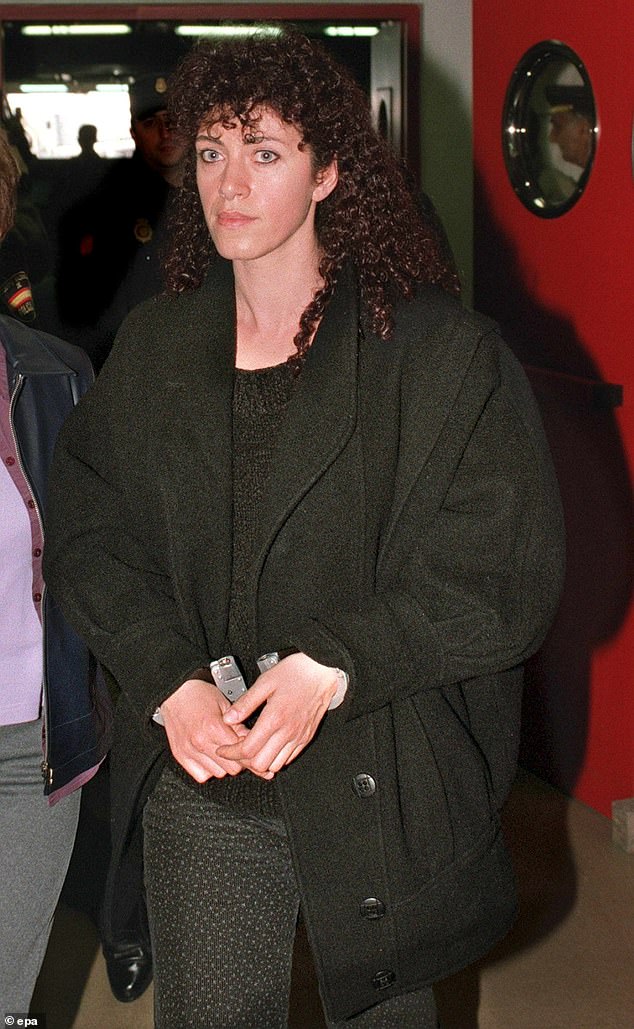 Riano is handcuffed after she arrives at the Madrid-Barajas airport on Wednesday May 9, 2001, after being extradited from France

Riano was no different. Before one attack in Madrid, she was asked to act as lookout for another gunman but then opened fire on a car of army officers. Another operation collapsed when she missed the target while admiring her reflection in a shop window – a trait mirrored by fashionista Villanelle.

Riano was finally tracked down by police to a flat in the south of France. She had a Browning 9mm handgun with the serial numbers erased and false identity papers. Having apologised to her victims’ families, Riano was released from jail a year before Eta ended its a 50-year campaign of bloodshed. To avoid photographers, she leapt from a van that drive her out, changed her clothes and roared away on the back of a motorbike.

In an uncanny echo, in the first series of Killing Eve, Villanelle, in denim hotpants and a leather jacket, tears through the Tuscan countryside on a motorbike.

Meanwhile, the real-life plot thickens: the Red Cross in Spain said they had no record of Riano working or volunteering for the charity. And, even if Riano is assuaging her guilt through humanitarian work, healing the scars of the past remains difficult for those whose lives she destroyed.

Juan Luís Lopez Lancharro, 56, a painter and decorator, will never forgive her for her part in the murder of his then 21-year-old brother Antonio Lancharro at the Plaza Republica Dominicana massacre.

‘To let her out after just 23 years was shocking. She should have been jailed for life,’ he says. And he is upset that Riano’s killing spree has inspired a TV drama. ‘Films and TV should not be glamorising evil like that,’ he says. ‘It’s an outrage to create a drama out of something that destroyed 23 families.’

The team behind Killing Eve were attracted to the idea of an ‘intelligent and tonally bold female assassin’. But it’s surely very unlikely they’ll end the series with Villanelle having a change of heart and working for the Red Cross.