Assassins slay British ‘businessman’, 39, in a hail of bullets outside his luxury Spanish villa

Peter Andrew Williamson (pictured), 39, from Salford, was killed as he parked outside his villa in Riviera del Sol after returning from the gym on Thursday

A British businessman who was shot dead in a professional hit in a Costa del Sol holiday resort has been pictured for the first time.

Peter Andrew Williamson, 39, from Salford, Greater Manchester, was killed as he parked outside his luxury villa in Riviera del Sol near Fuengirola after returning from the gym on Thursday.

He died instantly after one of the seven bullets fired at him hit him in the heart.

Today friends and relatives paid tribute to Mr Williamson, who was nicknamed Snaggle and is understood to have two children.

‘Taken from us in horrible circumstances. Gone too soon. Love you Snaggle. Always in my heart. Will never be forgotten.’

Mr Williamson was gunned down in a residential street called Calle Ofrebres, in hills above the Med on the north side of the AP-7 motorway running along the Costa del Sol, around 3.15pm on Thursday. 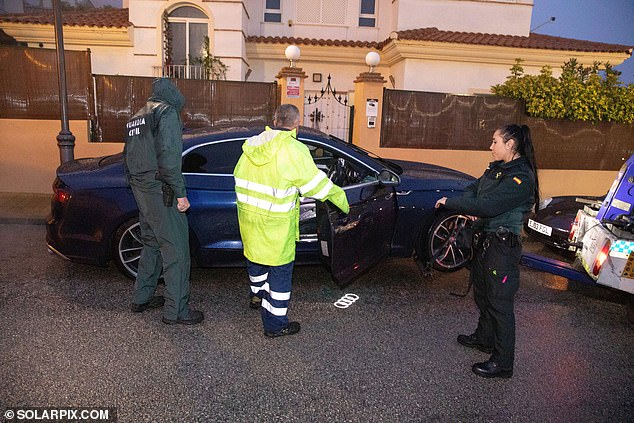 He died instantly after one of the seven bullets fired at him hit him in the heart. Pictured: His black Audi being towed away from the scene

He was sitting in his UK-plated two-seater Audi when he was targeted outside his large detached home, which has a notice by the front gate which says in Spanish: ‘CCTV operating in this area.

‘You may be being recorded.’

Spanish business records show Mr Williamson, believed to have been shot from another vehicle that drew up beside him before speeding from the scene, was registered as a self-employed agricultural sector intermediary specialising in ‘international trade.’

Local paper Diario Sur reported today police were focusing on the theory the expat’s murder was drugs-related and said he had been arrested in March by Spanish police for using a transport firm to send cannabis resin from Malaga to an unidentified destination.

There has been no official comment from Costa del Sol police about the reports.

Officers have confirmed no arrests have yet taken place. 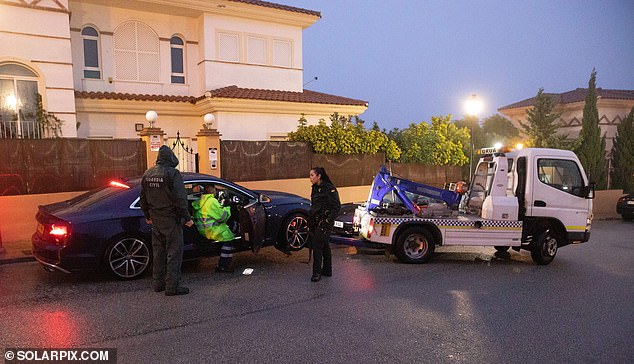 Mr Williamson was gunned down in a residential street called Calle Ofrebres (pictured, his car in the aftermath), in hills above the Med on the north side of the AP-7 motorway running along the Costa del Sol, around 3.15pm on Thursday

Mr Williamson’s murder was the second in less than a week in the area.

Last Friday a man was shot dead on a residential estate known as Andasol a short drive from Marbella town centre and close to a beach area called Alvarito Playa east of Marbella.

Detectives hunting the killer, believed to have fled the scene in a getaway car, have not made any official comment on the nationalities of the gunshot victims, although local reports at the time said they were of ‘Arabic origin.’

That incident is being linked to a gangland drugs feud.

In January a millionaire businessman who was close to the stars of reality TV series TOWIE and partied with the likes of Mohamed Al Fayed, was shot dead outside his luxury Costa del Sol home.

Marco Yaqout was gunned down in the early hours of January 21 as he drove into his garage in his trademark UK-plated Bentley. 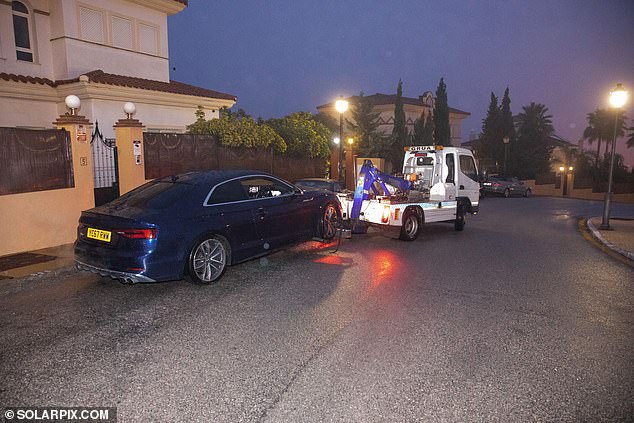 Detectives hunting the killer, believed to have fled the scene in a getaway car, have not made any official comment on the nationalities of the gunshot victims, although local reports at the time said they were of ‘Arabic origin.’ Pictured: Mr Williamson’s car being towed from the scene

His killer was waiting for him outside his villa on a quiet residential street in an upmarket neighbourhood in San Pedro de Alcantara near Marbella called Las Petunias.

English-speaking entrepreneur Marco was described at the time of his murder as the owner of at least five-well-known nightspots in Puerto Banus, including the TOWIE favourite TIBU, and Linekers.

The gruesome murder was the latest in a string of violent incidents on the Costa del Sol in recent months.

They have included two attacks on Britons, the shooting of a Dutchman in a sushi restaurant in the popular resort of Benalmadena and the machine-gun murder of a Frenchman outside his home in Marbella.

Last September a 24-year-old Brit was stabbed twice in the legs by an assailant who attacked him in the street without warning in the popular resort of Puerto Banus.

The violent crime occurred ten days after a 35-year-old Brit was shot, stabbed, beaten and given a Glasgow Smile – caused by making a cut from the corners of a victim’s mouth up to the ears – close to the same area after being abducted by a gang of criminals over a drug deal.