Asteroid Bennu may contain the building blocks of LIFE

Asteroid Bennu may contain the building blocks of life within its ‘rubble-pile’ surface, and the body was once part of a much larger, water covered world, scientists claim.

NASA’s OSIRIS-Rex mission will land on Bennu on October 20 to collect samples of the space rock and bring them back to Earth for scientists to study in the lab.

As part of the preparations for this mission, six research papers have been published looking at the history and make-up of the near Earth asteroid using data gathered by OSIRIS-Rex that has been orbiting the space rock since 2018.

One of those papers, by Amy Simon of NASA Goddard, found evidence of carbon-bearing and organic materials widespread across the surface of Bennu.

These materials were found in veins running through rocks covering the surface of the asteroid, and had to be formed as a result of free flowing water that was on the larger, long destroyed celestial body that created Bennu.

This is the first confirmed detection of these building blocks of life on a near-Earth asteroid, according to the team behind the study.

The discovery of life giving molecules and ancient free-flowing water adds credence to the theory that meteorites may have carried the first building blocks of life to Earth – molecules that eventually led to all life on the planet including humanity.

Since its rendezvous with Bennu in late 2018, OSIRIS-REx has conducted detailed orbital surveys and reconnaissance of the surface of the space rock.

It has been collecting data on the asteroid’s composition and structure as well as identifying suitable locations for sample collection.

Teams of researchers from institutions around the world have been pouring over the data to better understand the mysterious lose pile of orbiting rocks.

It is a topsy-turvy world that is part of a population of asteroids that are suspected to be responsible for Earth’s water and life by scientists.

Simon and colleagues from NASA used infrared spectroscopy to show that carbon-bearing materials, such as organic molecules and carbonate minerals, are widespread across most of Bennu’s surface.

Asteroid Bennu may contain the building blocks of life within its ‘rubble-pile’ surface, and the body was once part of a much larger, water covered world, scientists claim

These primitive building blocks of life are particularly concentrated on individual boulders, the team explained.

‘The abundance of carbon-bearing material is a major scientific triumph for the mission,’ said Dante Lauretta, OSIRIS-REx principal investigator.

‘We are now optimistic that we will collect and return a sample with organic material – a central goal of the OSIRIS-REx mission.’

These may have come from the fact the asteroid once had running water on its surface, according to Hannah Kaplan, also of NASA Goddard.

Some of the carbonates they found evidence for are only formed through interactions with water and are on Bennu in veins three feet long and inches thick.

This is evidence that ‘water once flowed freely over the rocks’ and suggests Bennu was once part of a larger parent body with a hydrothermal system.

‘Fluid flow on Bennu’s parent body would have taken place over distances of kilometres for thousands to millions of years,’ the researchers wrote.

When that parent body was still young – in the early solar system – it still had enough heat to keep liquid water flowing in its soils and as it dribbled through the asteroid it deposited the carbonate minerals in the fractures it passed through.

Bennu was born out of the debris of the parent body and some of those mineral veins have survived intact – as discovered by the NASA team.

This is why we do spacecraft exploration,’ says Kaplan. ‘We didn’t expect to see these things, we cannot see them from Earth, and we needed to be orbiting pretty close up to the asteroid in order to see them.’

Daniella DellaGiustina and colleagues from the University of Arizona used different spectrums of light to map the surface of Bennu and found it had been through a complex evolution due to space weathering.

This included being exposed to cosmic rays and solar winds more in some regions than in others – which had exposed fresh material to the surface at different times.

The area of Bennu that OSIRIS-Rex will land – the Nightingale crater region – is made of fresher materials meaning it will provide a cleaner look at the early solar system as the rocks are from deeper inside the asteroid – when Bennu first formed.

Researchers from around the world have been involved in the study of data from Bennu, including Open University researcher Dr Ben Rozitis. 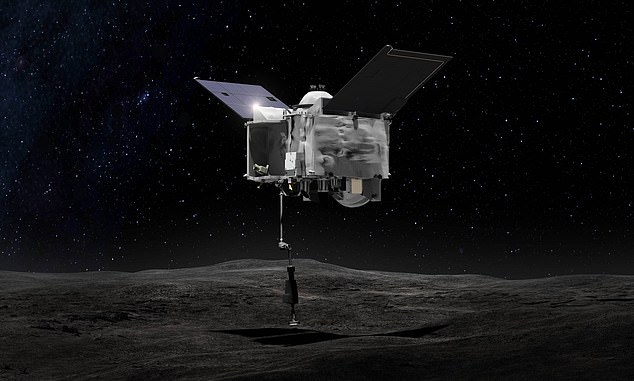 NASA launched OSIRIS-Rex (Origins, Spectral Interpretation, Resource Identification and Security Regolith Explorer) to asteroid Bennu in 2018 to study the object up close and will take samples from the rock on October 20, 2020

He has analysed the temperature changes on the space rock and found that some of the boulders are weaker and more porous than others.

The stronger rocks are the ones with the carbonate veins – suggesting interacting with water may have resulted in stronger rocks due to liquid seeping material into holes in the boulders.

The weaker boulders are particularly interesting for Earth scientists though.

Dr Rozitis says these porous rocks would be unlikely to survive entry into Earth’s atmosphere as they would heat up and explode.

This means we have never seen rocks like this close up on the planet before – presenting a unique opportunity when they are returned to Earth by NASA.

The six papers have been published in the journals Science and Science Advances.