Asteroid MOONS Earth: Space rock bigger than the Empire State Building that zipped past our planet last week has its own miniature satellite

A massive asteroid bigger than the Empire State Building that zipped past the Earth at 56,000 miles per hour last week has its own tiny moon.

The binary system of space rocks was discovered by radar images from the Arecibo Observatory in Puerto Rico and is called 2020 BX12.

The bigger of the pair has a diameter of more than 1,470 feet which puts it in the ‘potentially hazardous’ to Earth list of stellar objects kept by NASA.

It’s not likely to hit us anytime soon though, it flew nearly three million miles from the Earth on February 3 – that’s 11 times further from us than the Moon is.

The smaller asteroid is just 230 feet in diameter and orbits its parent like a tiny moon about once every 49 hours, astronomers say. 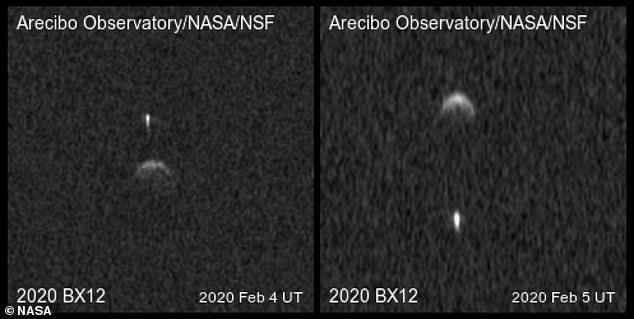 Radar images of binary near-Earth asteroid 2020 BX12. The smaller object appears to be much brighter and is in a 49 hour orbit of the bigger rock

As the duo moved away from the Earth astronomers spotted the odd bright spot orbiting the main rock and found it was a second asteroid – albeit much smaller.

The smaller asteroid orbits about 1,118 feet from the parent rock.

‘The movement of the satellite between the two observations, which were made ~23 hours apart, suggests a mutual orbital period of 45-50 hours and would be consistent with a tidally locked satellite.’

According to NASA it isn’t unusual for an asteroid to have a moon but it is rare. About 60 of the 16.000 known near-Earth asteroids have at least one moon.

This binary object was the first discovery by the Arecibo Observatory after it came back online after a month of being closed due to Earthquakes hit Puerto Rico.

The rock was originally spotted by astronomers using at telescope on Mauna Loa in Hawaii on January 27, but it wasn’t confirmed as binary until February by Arecibo.

The astronomers believe it is tidally locked with its companion – just like the Moon is with Earth – meaning one side always faces the larger body. 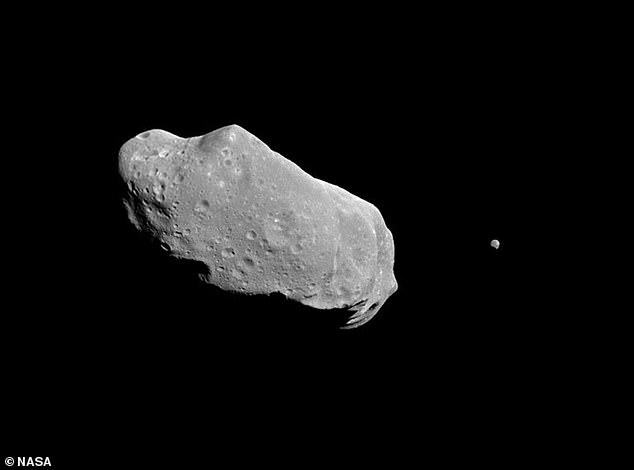 Due to the size of space and relatively tiny size of asteroids finding them is incredibly difficult, NASA says.

As binary asteroids are rare, astronomers don’t know very much about them including how they form or where the moon comes from.

Some suggest they may form as a result of two asteroids forming together like binary stars, others could form by capturing smaller objects in a fly-by.

BX12 is a member of the Apollo group of near-Earth asteroids, flying inside Earth’s orbit and out beyond Mars.

It will pass Mars in June but won’t be back past Earth until 2022 – by then it will be even further way – it’s next close approach won’t be until after 2100.