Asteroid that lit up the skies in 2008 ‘once contained water’

An asteroid that exploded in Earth’s atmosphere in 2008 was part of a much larger space rock that once contained water, a new study reveals.

The asteroid, called 2008 TC3, lit up the skies of Sudan in October 2008 and showered the ground with 600 meteorites, known collectively as Almahata Sitta.

After analysing a fragment of Almahata Sitta, US researchers found evidence that it came from a large, water-rich parent asteroid roughly the size of a dwarf planet – anywhere from 400 to 1,100 miles (640 to 1,800 kilometres) in diameter.

Experts believe the parent body formed in the presence of water under intermediate temperatures and pressures, based on the unexpected presence of a type of amphibole crystal.

US scientists studied the composition of a small shard of a meteoroid to determine that it likely originated from a previously unknown parent asteroid. This false-colour micrograph of the meteoroid sample shows the unexpected amphibole crystals identified in orange

An asteroid is a large chunk of rock left over from collisions or the early Solar System. Most are located between Mars and Jupiter in the Main Belt.

A comet is a rock covered in ice, methane and other compounds. Their orbits take them much further out of the Solar System.

Amphiboles have hydroxyl groups in their structure and are considered to be stable only in environments where water can be incorporated into the structure.

‘Our surprising result suggests the existence of a large, water-rich parent body,’ said study author Vicky Hamilton of the Southwest Research Institute in Boulder, Colorado, US.

‘Some of these meteorites are dominated by minerals providing evidence for exposure to water at low temperatures and pressures.

‘The composition of other meteorites points to heating in the absence of water.

‘Evidence for metamorphism in the presence of water at intermediate conditions has been virtually absent, until now.’

Asteroids – and the meteors and meteorites that sometimes come from them – are leftovers from the formation of our Solar System 4.6 billion years ago.

Most reside in the main asteroid belt between the orbits of Mars and Jupiter, but collisions and other events have broken them up and ejected remnants into the inner Solar System.

Almahitta Sitta is named after the location in Sudan above which the space rock exploded in 2008.

The 9-ton, 13-foot diameter asteroid entered Earth’s atmosphere and exploded into some 600 meteorites over the Sudan.

Witnesses at the town of Wadi Halfa and at a railway stop in the Nubian desert, known as ‘Station Six’ or Almahata Sitta in Arabic, reported they had seen a ‘rocket-like fireball’ in the sky. 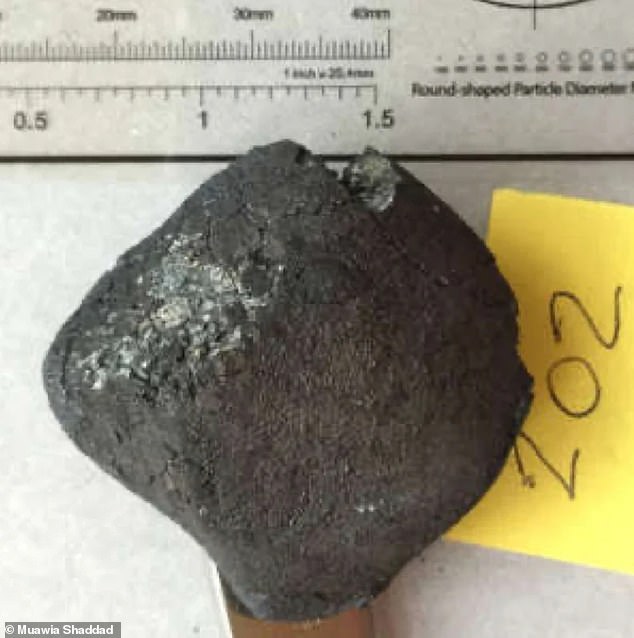 Almahitta Sitta, a type of carbonaceous chondrite (CC) stone, has been kept at the University of Khartoum, Sudan since its discovery in 2008.

CC meteorites are valuable because they record the geological activity during the earliest stages of the Solar System and provide insight into their parent bodies’ histories.

CC meteorites also represent only a small proportion – 4.6 per cent – of meteorite falls.

‘We were allocated a 50-milligram sample of AhS to study,’ Hamilton said.

‘We mounted and polished the tiny shard and used an infrared microscope to examine its composition.’

Spectral analysis identified a range of hydrated minerals, in particular tremolite, a rock-forming mineral and a member of the group of hydrated crystals called amphibole.

‘Essentially, this mineral forms under conditions that these meteorites were not previously known to have experienced,’ said Hamilton. 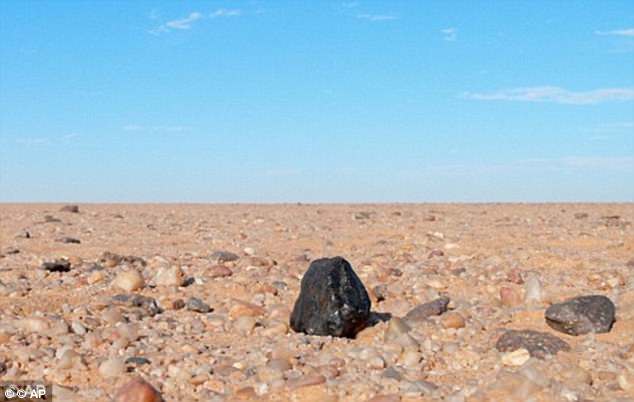 Diamonds found in the Almahata Sitta meteorite (fragment, pictured) come from a mysterious ‘proto-planet’ that was around 4.5 billion years ago, just a few million years after the birth of the sun

‘[This] points to intermediate temperatures and pressures and a prolonged period of aqueous alteration on a parent asteroid at least 400, and up to 1,100, miles in diameter.’

Amphiboles are rare in CC meteorites, having only been identified previously as a trace component in the Allende meteorite – the largest CC ever found on Earth, which lit up Mexican skies in 1969.

‘Almahata Sitta is a serendipitous source of information about early Solar System materials that are not represented by CC meteorites in our collections,’ Hamilton said.

The body that the meteorite came from will no longer exist, at least not in its once dwarf-planet-sized form.

But asteroid materials arriving on the early Earth may have differed significantly from what is represented by most meteorite collections.

The new study has been published in Nature Astronomy.

WHAT IS THE ALMAHITTA SITTA?

The asteroid – first labelled 2008 TC3 and later named Almahata Sitta after the place in Sudan where witnesses saw it explode above the Earth – was first spotted on October 6 at 3pm GMT.

It was just 20 hours away from earthstrike – though with a diameter estimated at just 16 feet it was bound to break up in the atmosphere and posed no threat.

The 83-tonne asteroid was tracked travelling at an estimated 27,739mph until it disappeared in to the planet’s shadow and then observed as it exploded in a fireball as bright as a full moon.

The explosion 23 miles above Sudan at 2.45am GMT on October 7 – exactly where and when scientists had predicted – was seen by the crew of a KLM airliner as flashes over the horizon and was also spotted by various satellites.

Witnesses at the town of Wadi Halfa and at a railway stop in the Nubian desert – ‘Station Six’ or Almahata Sitta in Arabic – reported they had seen a ‘rocket-like fireball’.