Rock samples taken from under the Chicxulub crater left by the dinosaur-killing asteroid 66 million years ago could hold the key to the origin of life on Earth.

A team of researchers found that the impact of the city-sized space rock produced a network of warm waterways under the crater, which is in the Yucatán Peninsula in Mexico.

This hydrothermal network provides the perfect conditions for micro-organisms to thrive, suggesting a similar asteroid impact billions of years earlier may have kickstarted life on our planet.

This process could even hold the key to finding life on Mars or rocky exoplanets outside our solar system, according to lead author Dr David Kring. 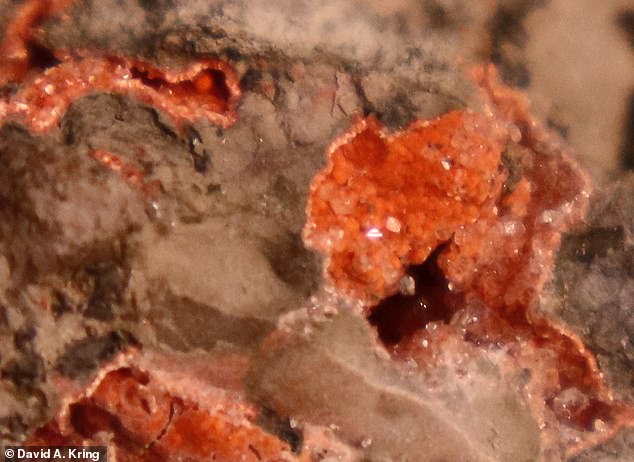 Hydrothermal minerals (analcime and dachiardite) inside a tiny cavity within impact rocks that fill the Chicxulub crater. Authors say this is a sign of the heated waterways

The hydrothermal network under the Chicxulub crater lasted more than a million years, and fuelled production of chemicals and proteins that make up living cells, according to the researchers.

The study was carried out by an international team from the Universities Space Research Association, Imperial College London and the universities of Edinburgh and Glasgow.

It backs up a theory that our once barren planet was seeded with life by meteorites that crash-landed and leached essential elements into hot springs.

Basic building blocks in the nutrient-rich broth bonded into self-replicating bits of DNA called RNA molecules – turning into the genetic code for life.

Study authors say the same findings would apply to any rocky world in the habitable zone – and even some on the edge, like Mars.

This discovery could help NASA and other space agencies plan future missions to the Red Planet and give them a good idea of where to hunt for signs of life.

His team extracted samples of sediment during an expedition to the site near the port of Chicxulub in the Gulf of Mexico.

Dr Kring said the disaster ‘hydrothermally altered’ the rocks under the crater. 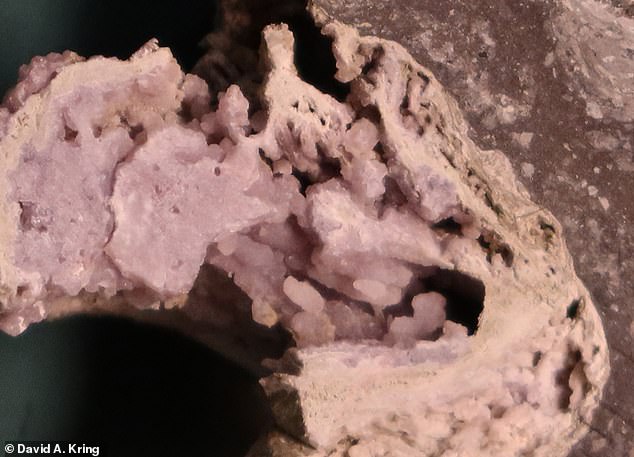 Close-up view of hydrothermal minerals (silica and feldspar) in impact melt rock. Rock samples taken from under the Chicxulub crater left by the dinosaur killing asteroid 66 million years ago could explain the origin of life on Earth

‘Impact-generated hydrothermal systems were prominent features on early Earth and wherever water exists in a planetary crust.’

Today, Yellowstone in the US has the largest and most varied collection of hydrothermal features on Earth including geysers, hot springs, mud pots and fumaroles – they bubble, gurgle, hiss and spout throughout the area.

This same activity as seen in Yellowstone would have been happening on a much wider scale in the aftermath of the extinction event. 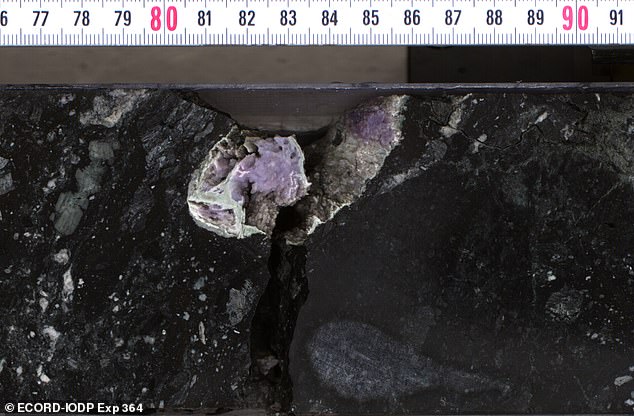 Hydrothermal minerals (silica and feldspar) in cavity within impact melt rock core. A team from the Universities Space Research Association, Imperial College London and the universities of Edinburgh and Glasgow took part in the study 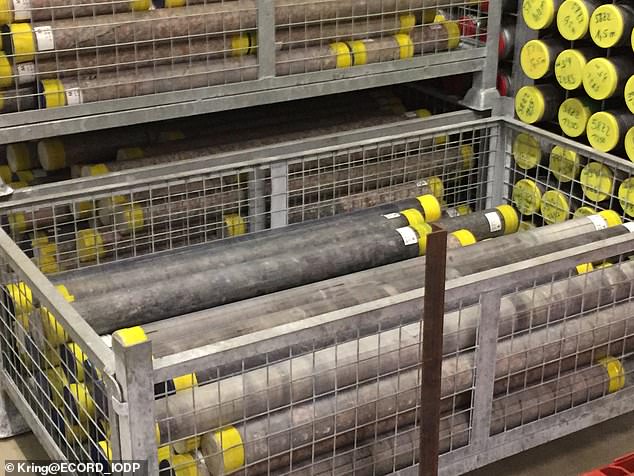 ‘This hydrothermal system may have persisted for more than 100,000 years, permanently altering the chemical and mineralogical makeup of a large region of Earth’s crust,’ Kring said.

The latest study published in Science Advances suggests hot fluid circulated at least 2,300ft below the surface of the crater site.

Mineral evidence shows the hydrothermal system was initially up to 752°F – cooling to below 194°F within about two million years.

The asteroid was bigger than Mount Everest and killed off 90 per cent of plants and 70 per cent of animals – including the dinosaurs.

Dr Kring and colleagues also observed a network of porous, permeable niches that could have provided habitats for microorganisms within the crater.

Similar environments created by much more ancient impacts could have provided ideal conditions for the origin and evolution of life.

The research has been published in the journal Science Advances.

The collision released a huge dust and soot cloud that triggered global climate change, wiping out 75 per cent of all animal and plan species.