Asthma and flu could be a ‘lethal combination’ for four millions patients in the UK, a charity has warned.

This could lead to an asthma attack, which kill around three people die each day in the UK. The charity urged patients to get the flu vaccine.

It comes after a father was put into a coma in February this year after suffering an asthma attack triggered by the flu.

Adam Blackman, 47, from East Sussex, spent longer than a month in hospital with pneumonia and a collapsed lung.

People with asthma are being urged to immediately get the flu vaccine to avoid life-threatening asthma attacks. Pictured, Adam Blackman, 47, of East Sussex, was put in a coma this year after getting flu 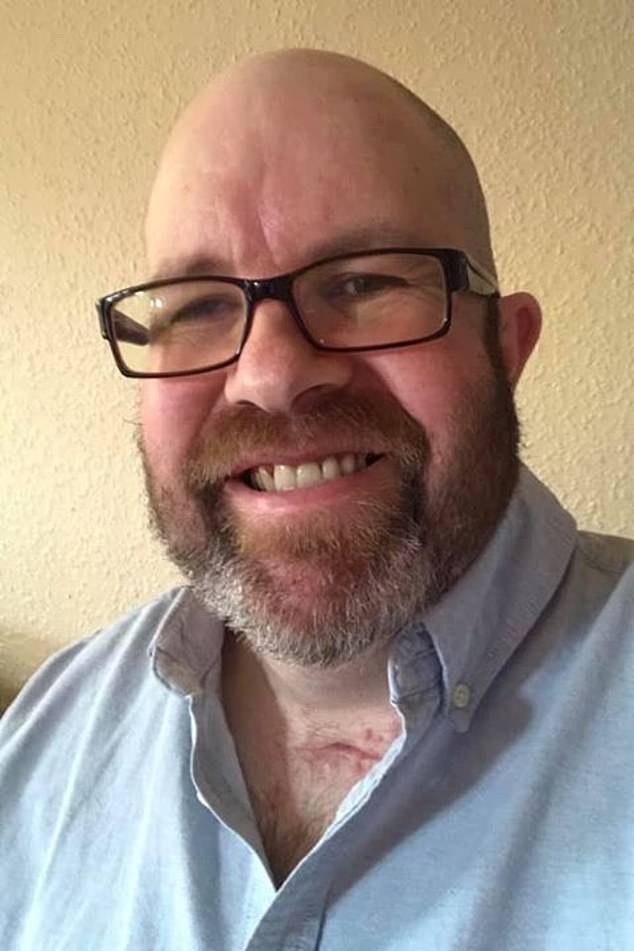 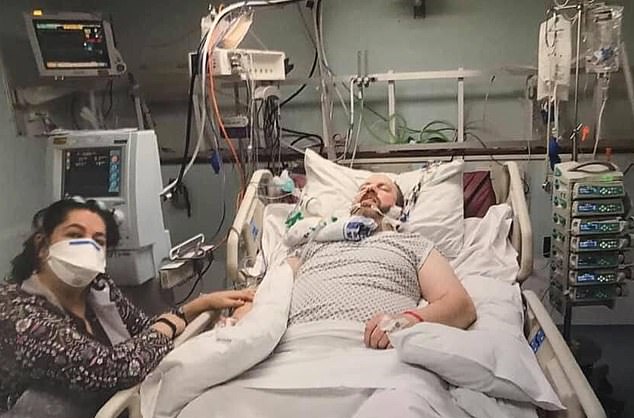 Mr Blackman was found struggling to breathe by his wife (pictured) in February this year. He was rushed to hospital and put on a life support machine

Figure collected by the charity show flu and colds trigger asthma attacks in 83 per cent of children and 74 per cent of adults.

This equates to around four million of the total 5.4million people with asthma in the UK. The findings were based on a poll of 13,000 people.

Dr Andy Whittamore, clinical lead at Asthma UK and a practicing GP said: ‘Asthma and flu can be a potentially lethal combination.

‘People with asthma are also at higher risk of developing other serious flu related complications as the flu can make their asthma symptoms worse.’

Asthma patients already have weaker airways. If they contract flu, symptoms, such as wheezing, can become worse.

Flu infection in the lungs can also lead to serious complications such as pneumonia and other acute respiratory diseases.

To prevent any kind of hospitalisation, Dr Whittamore said: ‘We are urging people to protect their airways this winter and get the flu vaccine.

WHAT SHOULD PEOPLE WITH ASTHMA DO?

The flu vaccine is available free of charge to anyone with asthma who meets any of the following criteria:

• they have been using a preventer medicine

• they have needed a course of oral or systemic steroids

• they have had a previous hospital admission because of their asthma.

It can take up to two weeks for the vaccine to be fully effective, so Asthma UK is urging people to get it as soon as possible so they’re protected during the ‘peak flu’ season in December and January.

You can get the flu vaccine from your local pharmacist or GP. If people aren’t eligible for a free vaccine, they can access it for a small fee.

People with asthma should also make sure they keep taking their regular preventer medicines for their best chance of staying well with their asthma.

Asthma UK has issued top tips for people with asthma to protect themselves from flu this winter:

• Get a flu vaccine as soon as you can

• Carry your reliever inhaler (usually blue) with you at all times

‘The flu vaccine is the best way to prevent someone falling ill.’

It can take up to two weeks for the vaccine to be fully effective, and with ‘flu season’ just around the corner, the best time is now.

Only those with particular criteria can get a free jab, but the rest are being encouraged to pay the fee at pharmacies.

It’s free for anyone prescribed a preventer inhaler alongside their blue inhaler, those who have been hospitalised before or taken oral steroids.

Only half of people with chronic respiratory disease, including asthma, received their free flu vaccine last winter, official figures show.

Common reasons for refusing the jab include worries about the side effects and being sceptical about whether it would work.

The NHS states that the injected flu vaccine given to adults contains inactivated flu viruses, so it cannot give you flu.

Children’s nasal spray flu vaccine contains live but weakened flu viruses that also will not cause the flu.

Last year, flu deaths were at a six-year high, claiming the lives of over 1,500 people, figures showed.

Mr Blackman, a full-time father, escaped death after he suffered an asthma attack and flu complications.

He said: ‘I learnt the hard way that the flu can be life-threatening after it triggered a near fatal asthma attack.

‘My wife had just got home from work and I could barely breathe. It felt like someone had their hands around my throat. It was terrifying.

‘My wife dialled 999 and I was rushed by ambulance to hospital and the rest is a bit of blur.’

Mr Blackman was hooked up to a life support machine and put in isolation so that the flu wouldn’t spread to other people with asthma.

He said: ‘It was nearly catastrophic for me, but my friends and family were also at risk.

‘My brother in law who has asthma got ill shortly afterwards and ended up in hospital too.

‘Given how contagious flu can be I would urge everyone to get the flu vaccine, so they don’t have to go through the hell I’ve been through.

‘I’m not risking it again and have already got the flu vaccine. I am urging everyone with asthma to get it as soon as possible, it could save your life.’

To find out more about flu vaccinations visit here.

WHO IS ELIGIBLE FOR A FREE FLU JAB?

You should have the flu vaccine if you  are 65 years old or over, are pregnant, are living in a long-stay residential care home or another long-stay care facility, receive a carer’s allowance, or are the main carer for an elderly or disabled person.

The injected flu vaccine is offered free of charge on the NHS to anyone with a serious long-term health condition.

That includes those with chronic respiratory diseases, such as asthma that requires an inhaled or tablet steroid treatment, or has led to hospital admission in the past, chronic obstructive pulmonary disease (COPD), emphysema or bronchitis.

It’s free for anyone with a weakened immune system as the result of conditions such as HIV and AIDS, or medicines such as steroid tablets or chemotherapy.

The list of conditions is not definitive and is an issue of clinical judgement.

The flu vaccine is generally given as an injection to children aged six months to two years.

The nasal spray flu vaccine is recommended on the NHS for all healthy 2- and 3-year-olds, plus children in primary school.

In addition, children ‘at risk’ of serious illness if they catch flu are eligible for a flu vaccine on the NHS.