Aston Martin announced plans for £500million of trade with Japan yesterday in a boost for the Prime Minister’s visit to the country.

Theresa May said the luxury car maker’s plans would help safeguard jobs at the firm’s plants in the West Midlands and South Wales.

‘As we prepare to leave the European Union, it is vital that we build on our existing ties with friends and allies,’ she said.

‘Aston Martin is a prime example of the innovative and world-leading firms the UK is proud of and I’m delighted they are joining me on this important trade mission. 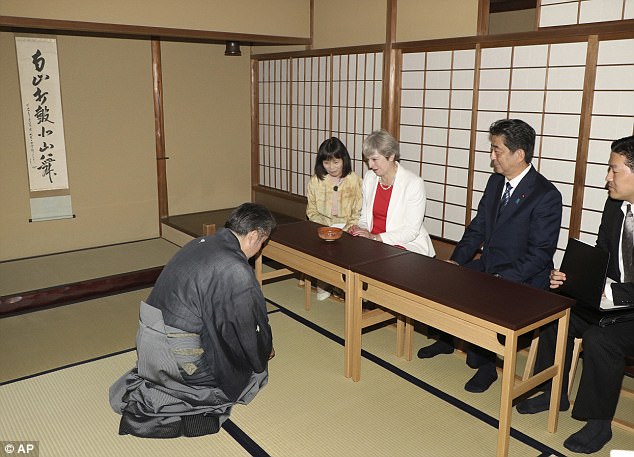 Over the next five years the plan involves exports of more than £400million and the use of £70million of components from Japanese suppliers. The announcement came as an adviser to Japanese prime minister Shinzo Abe said firms in the country preferred doing business with Britain.

Tomohiko Taniguchi told Radio 4’s Today programme that some firms were ‘uneasy’ about Brexit, but they were planning ‘to see what is going to happen down the road, rather than jumping into an uneasy conclusion’.

Mr Abe’s special adviser said no formal trade deal talks could begin until after the UK quits the EU, but said Japanese industrialists had an ‘inherent preference’ for doing business in Britain.

Mr Taniguchi said Mrs May is ‘going to make a giant stride forward’ with the visit as she and Mr Abe ‘give a very powerful signal to the rest of the world’ about good relations between the two countries.

Downing Street said the length of the time Mrs May and Mr Abe spent together on the first day of her three-day trip was ‘unusual’ and showed the ‘strength and continuing positive relationship’ between the pair.

The two leaders met at the Fushin’an teahouse in Kyoto. The traditional Japanese tea-making ceremony dates back to a man called Sen no Rikyu, who in the 16th century perfected the tradition and whose descendants, the Omotesenke family, run the teahouse. 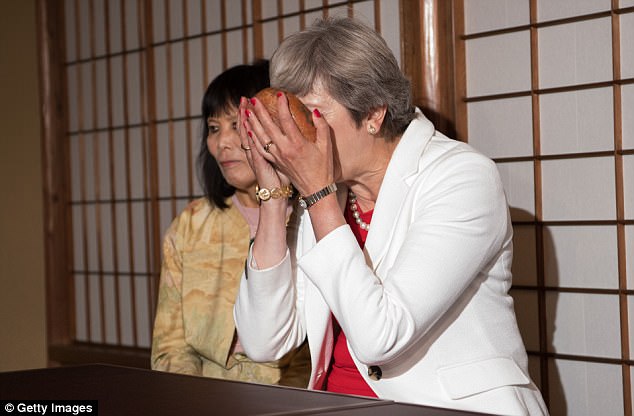 Mrs May, wearing a red dress and white jacket – the colours of the Japanese flag –removed her leopard print pumps before entering and emerged at the back of the teahouse side by side with Mr Abe, who pointed out the moss in the garden. ‘Very attractive, very calm,’ Mrs May said.

The leaders, flanked by interpreters, sat on a low bench behind the table, while on the opposite side of the room the master of ceremonies and his two assistants sat on the floor.

After a banquet that included salted entrails of sea cucumber, Mrs May and Mr Abe boarded a high-speed bullet train to Tokyo.

Discussions over the course of the day focused on North Korea but also touched on Brexit.