The coronavirus vaccines being rolled out in Britain work better against the Brazilian variant than first feared, research suggests.

An Oxford University study found its vaccine and the jab made by Pfizer perform just as well against the P.1 strain that first emerged in Manaus as they do against the Kent variant.

The vaccines, already in the arms of 25million Britons, have shown to be highly effective against the UK dominant Kent strain, reducing deaths and hospital rates by more than 85 per cent.

Scientists initially feared the P.1 variant would be resistant to vaccines because it has a number of worrying mutations on top of the ones it shares with the Kent strain.

There have so far been 12 cases of the Brazilian variant in the UK – nine in England and three in Scotland. All of the patients had either direct or indirect travel links to Brazil.

It found the vaccines produced nearly three times less antibodies against the Kent and Brazil variants when compared with the original strain. The researchers said this was still more than enough to neutralise the viruses.

However, the jabs stimulated up to nine times less antibodies when exposed to the South African variant, which has been detected in hundreds of people in the UK.

But antibodies are not the only part of the immune response to Covid — white blood cells also play an important role, meaning even if vaccines don’t produce a strong antibody response, they should still prevent severe illness. 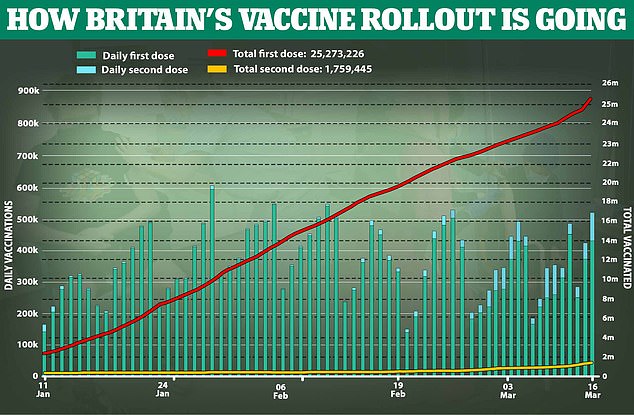 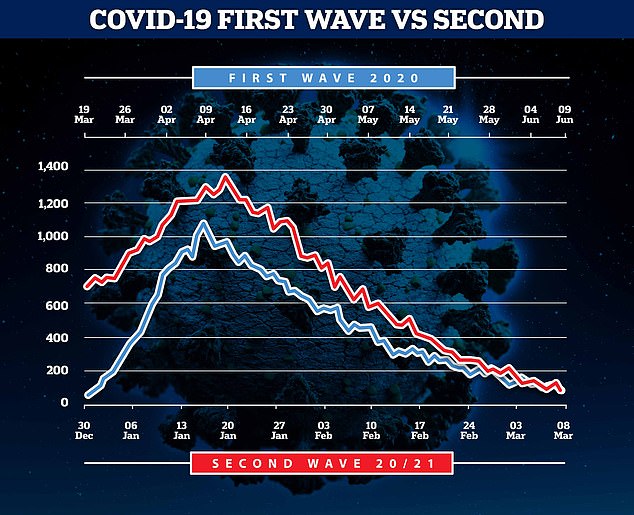 Daily coronavirus deaths in Britain are falling at a faster rate than they did when the first wave began to tail off, according to official data which provides even more evidence the vaccines are saving live

Vaccine makers have previously said the jabs will still stop the vast majority of people from falling sick with that strain.

They claim in the few vaccinated people who still go on to catch it, their symptoms will be reduced to ‘the sniffles’.

Professor Gavin Screaton, a medical expert who led the research, said: ‘This study extends our understanding the role of changes in the spike protein in escape from the human immune response, measured as neutralising antibody levels.

Daily coronavirus deaths in Britain are falling at a faster rate than they did when the first wave began to tail off, according to official data which provides even more evidence that vaccines are saving lives.

Figures from No10’s Covid dashboard show that fatalities in the second wave peaked higher and fell further in the following seven weeks than during the same time period last spring.

For example, daily Covid fatalities hit 1,362 on deadliest day of the pandemic on January 19. This had fallen to 138 seven weeks later on March 8, the most recent snapshot available – a drop of 90 per cent.

The early signs of the vaccine effect come as the Government announced more than 25million Britons have had at least one dose of either the Pfizer/BioNTech or Oxford University/AstraZeneca jabs.

The milestone, which means almost half of all adults in the country have been inoculated, was hit exactly 100 days after the mammoth rollout launched. Latest figures show 25,273,226 Brits have received the first injection, while 1,759,445 of them have had their second dose.

‘The results suggest that P1 might be less resistant to vaccine and convalescent (Covid infection) immune responses than B1351 (South Africa), and similar to B117 (Kent).’

The study used blood samples from people who have natural antibodies generated from a Covid-19 infection and from those whose antibodies were induced by the Oxford or Pfizer vaccines.

It found a nearly three-fold reduction in the level of virus neutralisation by the antibodies generated by the Oxford and Pfizer vaccines for the Kent and Brazil variants when compared to an original strain.

‘These data suggest that natural and vaccine-induced antibodies can still neutralise these variants, but at lower levels,’ the university said.

‘Importantly, the P1 ‘Brazilian’ strain may be less resistant to these antibodies than first feared.’

The vaccines struggled more with the South African variant, with between a seven-fold reduction in the level of virus neutralisation from the Oxford vaccine and a nine-fold reduction for Pfizer’s.

Professor Andrew Pollard, chief investigator on the Oxford University vaccine trial, said: ‘These further efforts to investigate the relationship between changes in the virus and human immunity provide new insights that help us be prepared to respond to further challenges to our health from the pandemic virus, if we need to do so.’

Cases of the Brazilian and South African variants have been found in the UK, with surge Covid testing employed to help prevent their spread.

Public Health England data shows there have been 344 cases of the South African strain and 12 cases of the Brazilian version.

The agency has six variants ‘under investigation’ – including strains from the Philippines and Antigua and several which spawned in the UK.

It has four more which it describes as ‘variants of concern’. They are: the current dominant Kent strain (B.1.1.7); one imported from Brazil (P.1), the South African variant (B.1.351), and one version of the Kent strain that has evolved further that cropped up in Bristol.

Despite new variants cropping up in the UK and around the world more often, top scientists have warned against becoming ‘obsessed’ with mutant viruses.

All the of the big vaccine-makers say they are confident their jabs will be highly effective against all emerging strains.

Oxford University researchers have said it is unlikely a single strain will make the vaccines significantly weaker in the next year.

Instead, they say there is more chance that a series of evolution over the space of many months or even years could eventually make the current crop of jabs less potent.