Astronomers have captured the moment a star, 500 million light years from Earth, exploded in a dramatic supernova, marking the end of its life.

A type II supernova explosion happens when a very large star can no longer fuse atoms within its core, causing it to explode, shedding off its outer layers.

The supernova, named SN2021afdx, happened in the unusually shaped Cartwheel Galaxy, which sits in the Sculptor constellation.

They then compared the image to one of the same galaxy, taken using the Very Large Telescope (VLT) in August 2014 – before the supernova explosion occurred.

A new, bright light can be seen in the lower left hand side of the new image, that isn’t visible in the 2014 picture.

Astronomers have captured the moment a star, 500 million light years from Earth, exploded in a dramatic supernova, marking the end of its life. The left hand image was from 2014 before the explosion, and on the right is from 2021, with the explosion in the bottom right

Light from an exploding star can be visible for months or even years after the event, although, despite being spotted in December 2021, the actual supernova explosion occurred 500 million years ago – it has taken that long for the light to reach Earth.

It is situated within the Cartwheel galaxy, which was once a normal spiral galaxy that underwent a head-on interaction with a smaller companion galaxy several million years ago, giving it its signature cartwheel appearance.

SN2021afdx was a type II supernova, which occurs when a massive star reaches the end of its evolution and leaves behind a black hole or neutron star.

Supernovae are one of the reasons astronomers say we are all made of stardust, because they leave the space around them full of heavy elements. These elements form into a young star, which may later lead to generations of new stars and planets. 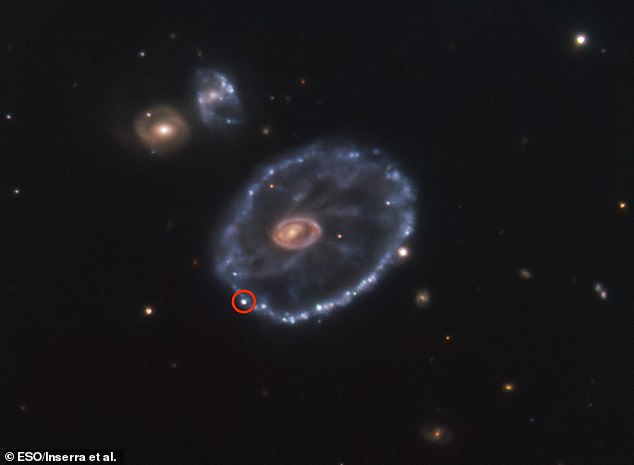 The supernova, named SN2021afdx, happened in the unusually shaped Cartwheel Galaxy, which sits in the Sculptor constellation

These observations need to happen of many years – to detect differences in the night sky – as, while visible for months, they can also be fleeting.

The first time SN2021afdx was spotted was in November 2021 by the ATLAS survey.

ATLAS is an asteroid impact early warning system developed by the University of Hawaii and funded by NASA.

It consists of four telescopes, with two in Hawaii, one in Chile, and the fourth in South Africa. They each automatically scan the whole sky several times every night looking for moving objects. They can be used to spot supernova.

After ATLAS found the supernova, the European Southern Observatory pointed ePESSTO+ at the object, this is the Public ESO Spectroscopic Survey for Transient Objects, designed to study fleeting events like a supernova.

Not only did it take the beautiful image of the galaxy, and supernova – in the bottom left corner of the structure – but also captured spectra. This spectra can be used by astronomers to identify that it was a type II supernova.

The Cartwheel Galaxy, which plays host to this new supernova event, is both a lenticular and ring galaxy – estimated to be 150,000 light-years in diameter.