Astronomers have found up to 170 ‘rogue’ planets of a similar size to Jupiter in a group 420 light years from the Earth – the largest group of its kind discovered so far.

These planets are lurking in the dark universe, with no star to illuminate them, and are normally impossible to image, according to astronomers from the Laboratoire d’Astrophysique de Bordeaux.

They took advantage of the fact that a few million years after forming, these gas giant worlds are still hot enough to glow, making them detectable.

They used multiple observatories, including the European Southern Observatory Very Large Telescope (VLT) in Chile, to make their remarkable discovery.

‘We did not know how many to expect and are excited to have found so many,’ explained study author Núria Miret-Roig, adding that they were in a star forming region in the Upper Scorpios and Ophiuchus constellations.

WHAT IS A ROGUE PLANET?

They are interstellar objects that are the size of a planet, but not bound to a parent or host star.

There are multiple reasons behind their origin, from evolving in smaller clouds of gas and dust, to being flung from a star system into outer space.

The Milky Way alone may have billions to trillions of rogue planets.

To find so many rogue planets in one go, the team examined data that spanned a 20 year period, from ground and space-based telescopes.

‘We measured the tiny motions, the colours and luminosities of tens of millions of sources in a large area of the sky,’ explains Miret-Roig.

‘These measurements allowed us to securely identify the faintest objects in this region, the rogue planets.’

Most of the data came from ESO controlled observatories, including the Very Large Telescope (VLT).

‘Their wide field of view and unique sensitivity were keys to our success,’ explains Hervé Bouy, an astronomer at the Laboratoire d’Astrophysique de Bordeaux, France, and project leader of the new research.

‘We used tens of thousands of wide-field images from ESO facilities, corresponding to hundreds of hours of observations, and literally tens of terabytes of data.’

The European Space Agency Gaia satellite, which was launched to measure the positions, distances and motions of stars with unprecedented precision, was also used by the team to pin-point areas to study.

Their findings suggest there could be many more of these elusive, starless planets that we have yet to discover.

‘There could be several billions of these free-floating giant planets roaming freely in the Milky Way without a host star,’ Bouy said.

Finding as many of these rogue worlds as possible can help astronomers find clues about how they form, and how they come to be out on their own. 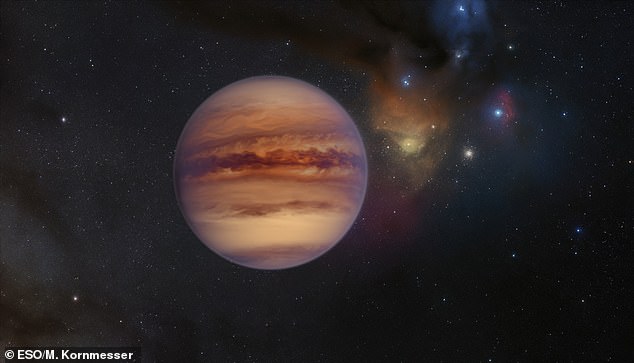 A WIDE MARGIN OF ERROR

The exact number of rogue planets found by the team is hard to pin down as they can’t measure the masses of the probed objects.

Those about 13 times bigger than Jupiter are most likely not planets – so cannot be included.

So the researchers analysed the planets’ brightness to provide an upper limit to the number spotted.

The brightness is, in turn, related to age as the older a planet, the dimmer it is as it cools down.

If the studied region is old, then the brightest objects in the sample are likely above 13 Jupiter masses, and below if it’s on the younger side.

Given the uncertainty in the age of the region, this method provided a rogue planet count of between 70 and 170.

Some believe they form from the collapse of a gas cloud that isn’t large enough to lead to the formation of a star, others that they’ve been kicked from a star system.

Further advances in technology will be key to unlocking the mystery of these nomadic planets, the authors explained.

The exact number of rogue planets found by the team is hard to pin down because the observations don’t allow the researchers to measure the masses of the probed objects – that is something for future, more advanced observatories.

Objects with masses higher than about 13 times the mass of Jupiter are most likely not planets, so they cannot be included in the count.

Unfortunately, they didn’t have values for the mass and had to use brightness to provide an upper limit on the number of rogue planets they observed.

The brightness is, in turn, related to the age of the planets themselves, as the older the planet, the longer it has been cooling down and reducing in brightness.

‘If the studied region is old, then the brightest objects in the sample are likely above 13 Jupiter masses, and below if the region is on the younger side,’ the team said.

‘Given the uncertainty in the age of the study region, this method gives a rogue planet count of between 70 and 170.’

They hope to continue to study them in detail when the VLT successor, the ESO Extremely Large Telescope (ELT) comes online in the next decade. 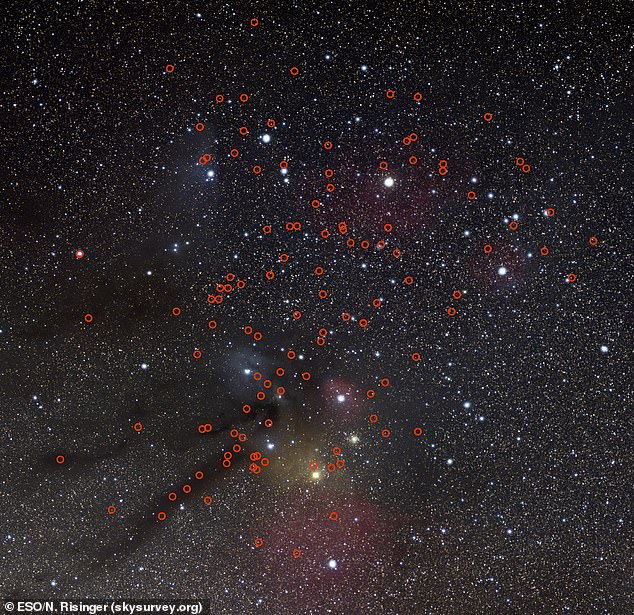 This image shows the locations of 115 potential rogue planets, highlighted with red circles, recently discovered by a team of astronomers in a region of the sky occupied by Upper Scorpius and Ophiucus

‘These objects are extremely faint and little can be done to study them with current facilities,’ says Bouy, adding that ‘the ELT will be absolutely crucial to gathering more information about most of the rogue planets we have found.’

A previous study by US scientists suggested the Milky Way could harbour more than 100 billion rogue planets.

The Nancy Grace Roman Space Telescope – due for launch in 2027 – is to build the first census of them. It’s likely to be ten times more sensitive to these objects than current ground based telescopes.

This research was presented in the paper ‘A rich population of free-floating planets in the Upper Scorpius young stellar association’ in Nature Astronomy.

The European Southern Observatory (ESO) built the most powerful telescope ever made in the Atacama Desert of northern Chile.

It has been involved in spotting the first image of an extrasolar planet as well as tracking individual stars moving around the supermassive black hole at the centre of the Milky Way.

It also observed the afterglow of the furthest known Gamma Ray Burst.