A knife-wielding man ‘with terrorist ideologies’ killed one person and attempted to stab several others in a central Sydney rampage today before being chased and pinned down by members of the public, including Britons.

Police say a 21-year-old Sydney man with a history of mental illness – named as Mert Nay – was found to have a thumb drive containing white supremacist material, despite shouting Allahu Akbar during the attack.

He is believed to have killed a woman in a residential unit before going on the rampage across the city’s business district.

Another woman was rushed to hospital after being stabbed in the back during the rampage while the attacker also tried to knife several others near a busy intersection in Australia’s largest city, say police.

Dramatic footage shows the man, holding a large knife, jumping on top of a car while screaming ‘shoot me in the head’.

Brave witnesses, including Britons Lee Cuthbert and brothers Paul O’Shaughnessy and Luke O’Shaughnessy, all from Manchester, were eventually able to tackle the man and pin his head down with a milk crate until police arrived to make the arrest. Earlier, a businessman was seen approaching the suspect armed with a chair.

Although the incident is not being treated as terror-related, the knifeman was described by police as a ‘lone actor’ who may have some terrorist ideologies.

New South Wales police commissioner said that while suspect had no known links to terror groups, but he did have a thumb drive with details of mass-casualty white-supremacist attacks in the US and New Zealand. 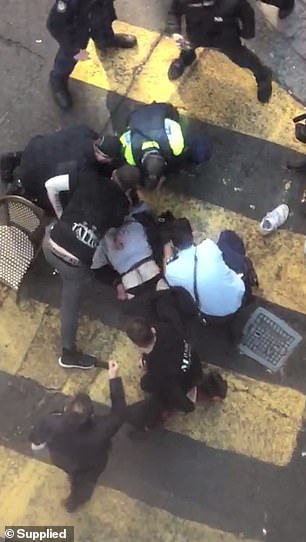 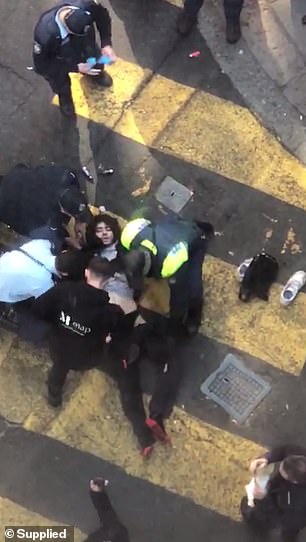 The alleged attacker was pinned to the ground by heroic bystanders. They help him don with milk crates until police arrived 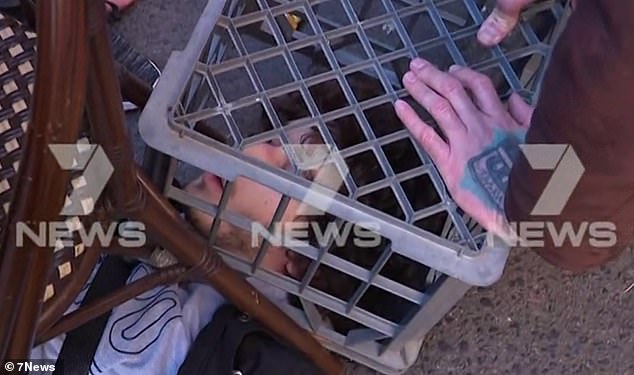 NSW police commissioner Mick Fuller said: ‘Information was found on him that would suggest he had some ideologies related to terrorism… but he has no apparent links to other terrorist organisations.’

Earlier, three British colleagues described how they raced from their fourth-floor office to the street.

‘We’ve opened the window and seen the guy wielding a knife and jumping on the bonnet’ of a nearby car, Paul O’Shaughnessy, a former professional footballer, told AFP.

Convinced it was a terrorist attack, his brother Luke – a champion Muay Thai boxer – led the chase.

‘We all just ran down the building and chased him down the street,’ said Roberts. ‘Everyone was kind of panicking, no one really knew what was happening,’ he said. ‘Not your normal Tuesday afternoon.’

Cuthbert said Luke, with the help of another man, ‘managed to get him down on to the floor and pin him down’ with chairs and a plastic crate before police arrived.

‘We’re a very, very close team, we’re a start-up recruitment company’ he added. ‘We’re all brothers really, so when you see brothers running, your natural instinct is to go and follow.’

Police said despite indications the assailant shouted ‘Allahu Akbar’ and ‘shoot me’ it was not yet clear whether there was a political motive.

‘It would appear at this stage it is unprovoked but we are keeping a very open mind as we move forward,’ police spokesman superintendent Gavin Wood said, hailing the action of the bystanders.

Three Britons have been hailed as ‘heroes’ by police after they helped detain the knifeman.

Lee Cuthbert, Paul O’Shaughnessy and Luke O’Shaughnessy, all from Manchester, were working in the area when they heard the man attempting to stab several people outside.

They described the moment they apprehended the suspect as being likely down to ‘instinct’, with dramatic eyewitness footage appearing to show a young man being pinned to the floor with chairs and a milk crate.

Paul O’Shaughnessy, speaking with a distinctive northern accent, told reporters: ‘He had a balaclava on, he was wielding a knife with blood on it. 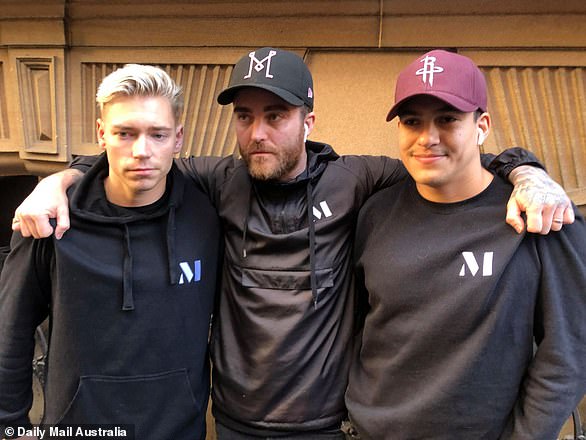 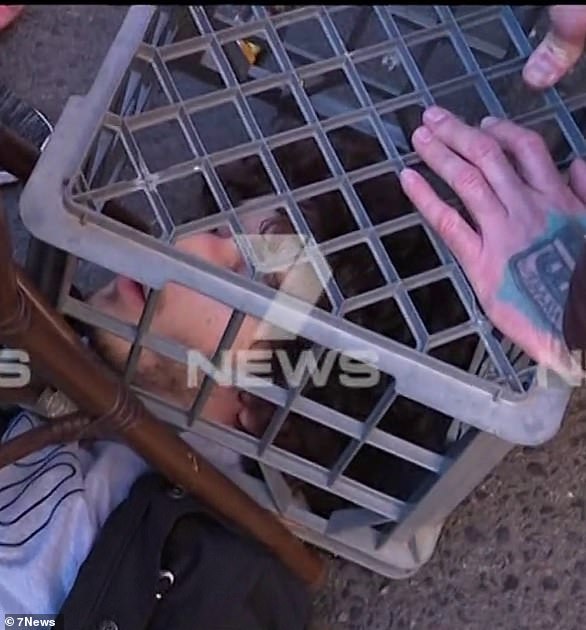 ‘We went down the escalator and continued to chase the guy where other people were going away because obviously he was wielding a knife.

‘I don’t know whether it was an instinct thing or not what, but we was like, right, we’ve got to try and restrain this guy from doing any more.

‘My brother and I just ran across here, these boys followed, and we managed to get a grip with him and another guy.

‘We’ve got a grip of him and restrained him fully, and then just waited for the cops to come. He’s got blood all over him.’

New South Wales Police Superintendent Gavin Wood, speaking to reporters near the scene, said: ‘A number of members of the public actually physically restrained the offender.

‘And I want to acknowledge those people, those members of the public who got involved. They are brave, and I can only use that word seriously. 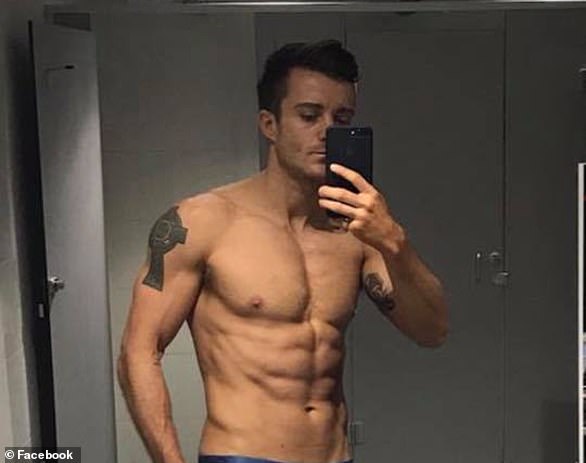 Paul O’Shaughnessy (pictured), speaking with a distinctive northern accent, told reporters the man ‘had a balaclava on, he was wielding a knife with blood on it’ 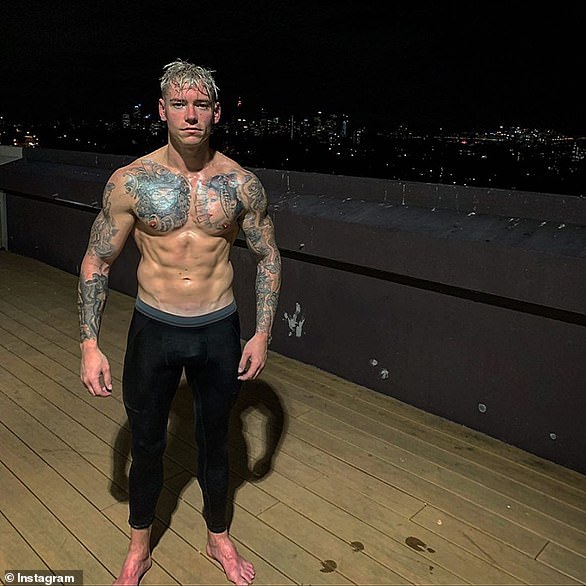 Lee Cuthbert said Luke, with the help of another man, ‘managed to get him down on to the floor and pin him down’ with chairs and a plastic crate before police arrived 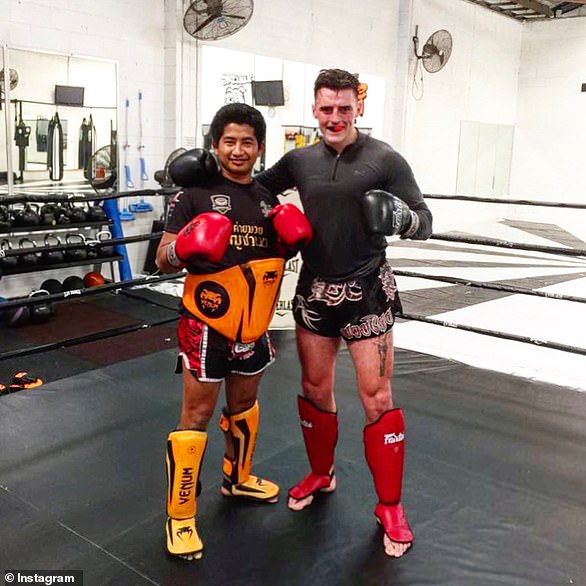 ‘They are significantly brave people. They approach the person … with clear evidence of a stabbing previously. These people are heroes, and I want to acknowledge that.

‘These members of the public going about their day-to-day business have jumped into a situation which was extremely dangerous, extremely hostile, and they have brought a person – who we will be alleging stabbed an innocent person for no specific reason – into custody and allowed us to do our job.’

He posted on Twitter: ‘The violent attack that took place in Sydney this afternoon is deeply concerning.

‘The attacker is now in police custody following the brave actions of those who were present at the scene and able to restrain him.

‘The motivation for this attack has not yet been determined as police are continuing with their enquiries.

‘Our thoughts are with all of those who have been impacted by this violent attack.’ 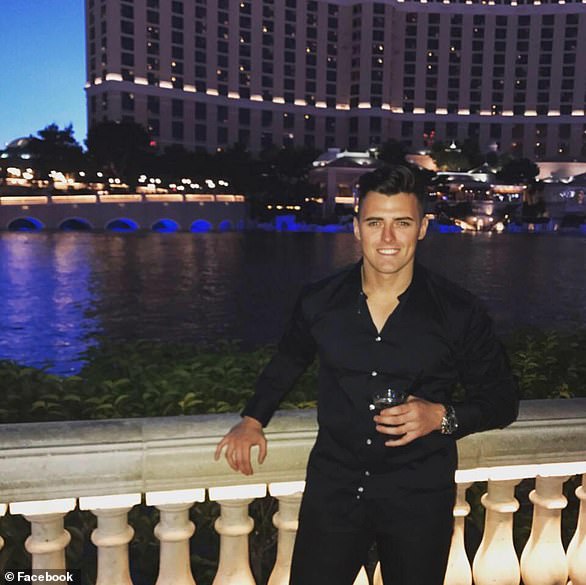 ‘To approach a person… with clear evidence of a stabbing previously, these people are heroes.’

‘The attacker is now in police custody following the brave actions of those who were present at the scene and were able to able to restrain him,’ he said in a tweet.

‘Our thoughts are with all those who have been impacted by this violent attack.’

Dramatic footage showed the man, wearing a grey hooded jumper and holding a large knife, jumping on top of a Mercedes while screaming ‘shoot me in the head’. 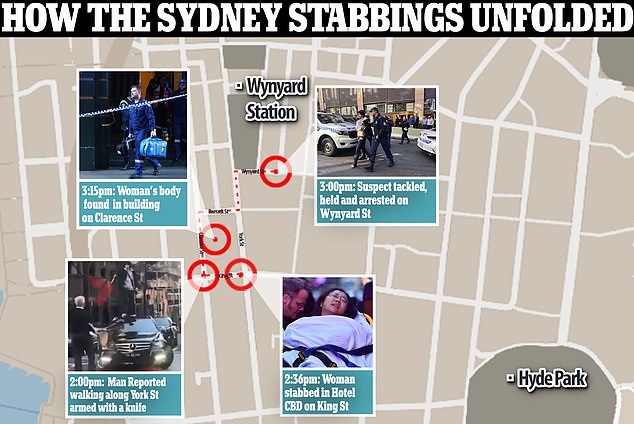 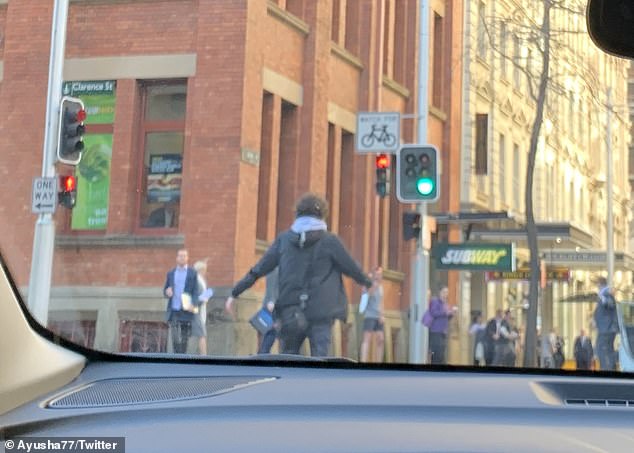 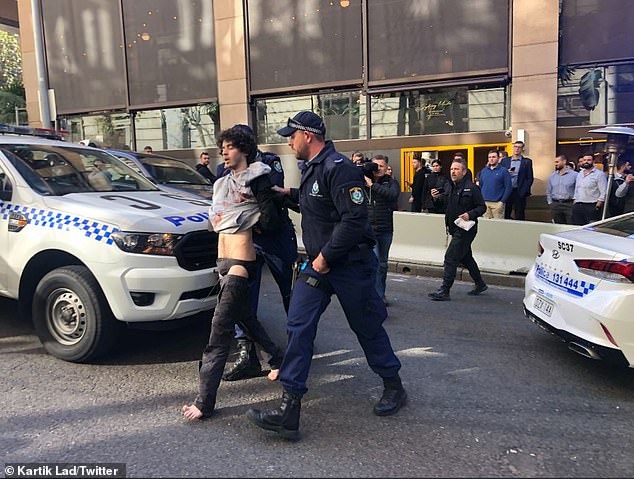 Police were called to King and Clarence Streets in Sydney, near Wynyard Station at about 2pm on Tuesday 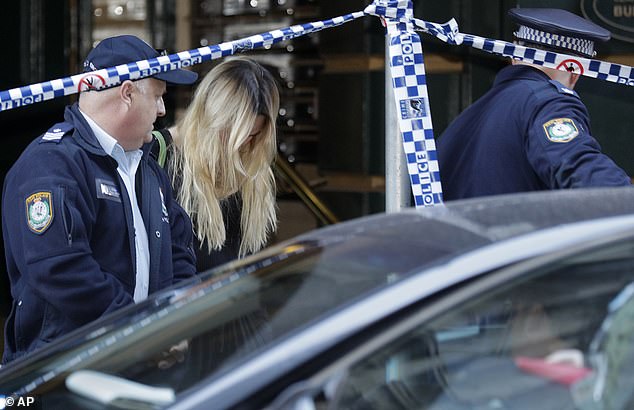 The alleged attacker was pinned to the ground outside a hotel on Clarence Street, where a woman had been found dead with her throat slit (pictured a witness to the incident inside the hotel)

Moments before the attacker was arrested, another woman was found inside The Grace Hotel with a stab wound. She was taken to hospital in a stable condition.

A painter working on a mural near where the man was arrested witnessed him charging down the street with a ‘big kitchen knife’ with five or six people in close pursuit. 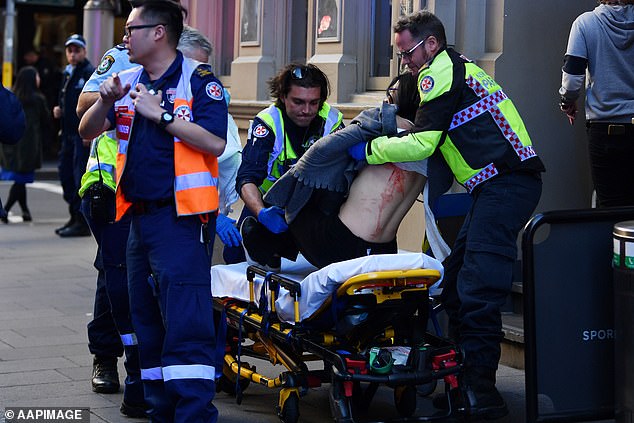 As many as six people were stabbed during the incident on Tuesday. Emergency crews rushed to help the victims 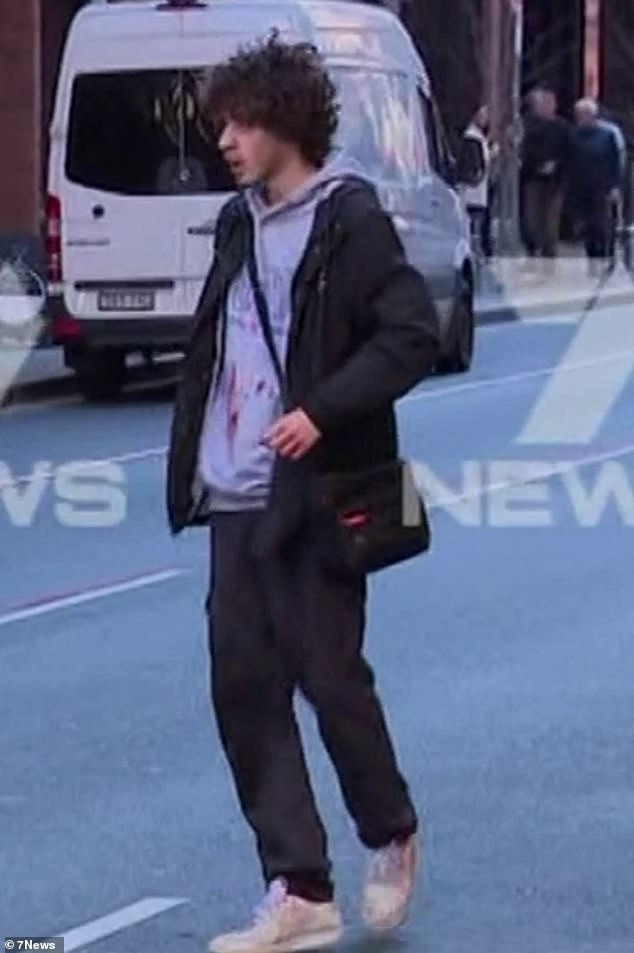 ‘At that point there were people chasing him down the street trying to stop him,’ Ms Hales, who was at work nearby, said.

Ms Hales described the man as being in his late 20s or early 30s, Caucasian and with dark curly hair.

‘He wasn’t looking in great shape – it was fast.

‘A whole lot of guys just came down on top of him and laid him down’.

A barrister named Marco, who was working at Batch Café, on York Street, watched in horror as the chaos unfolded. 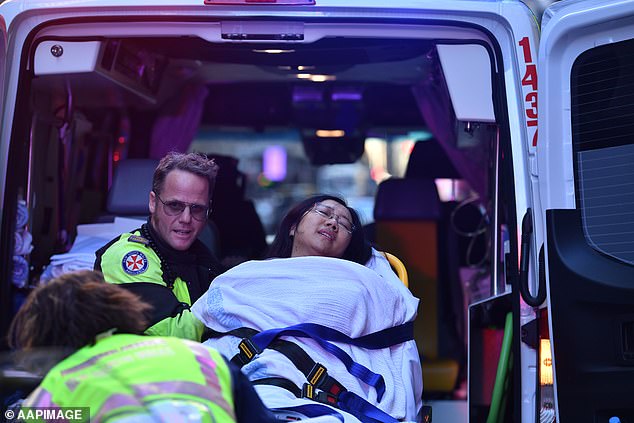 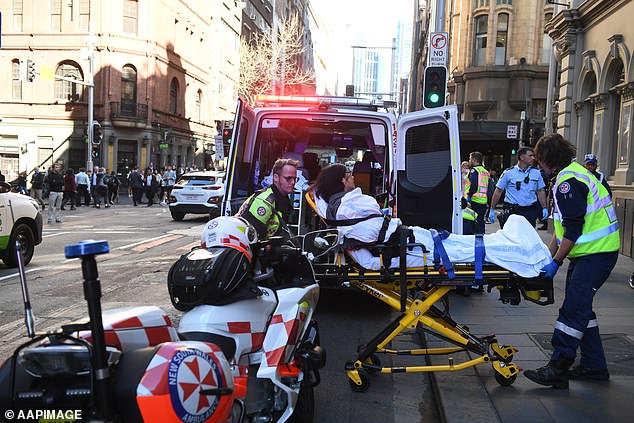 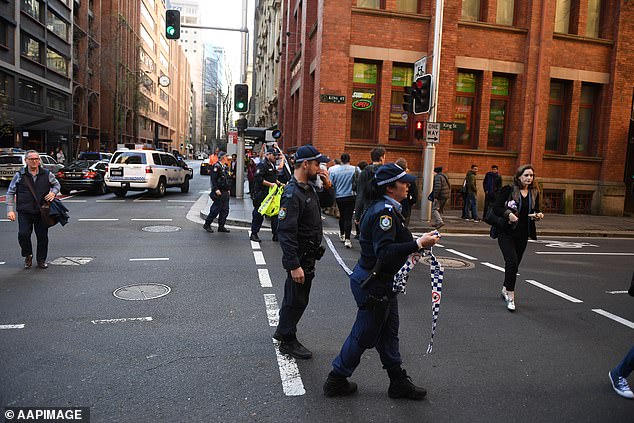 ‘He was trying to smash a driver side window of a random car with the knife. He was unsuccessful. 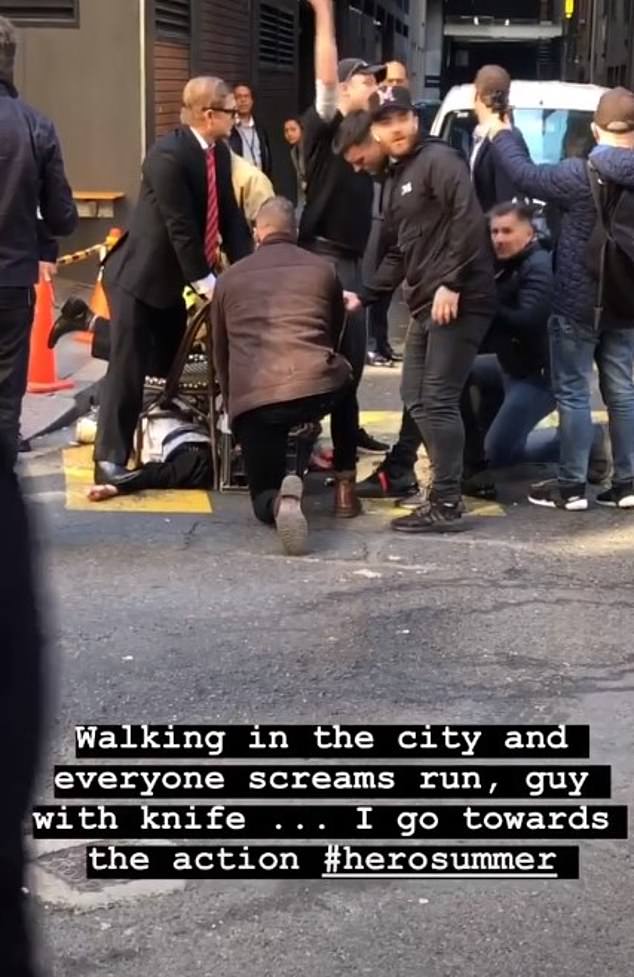 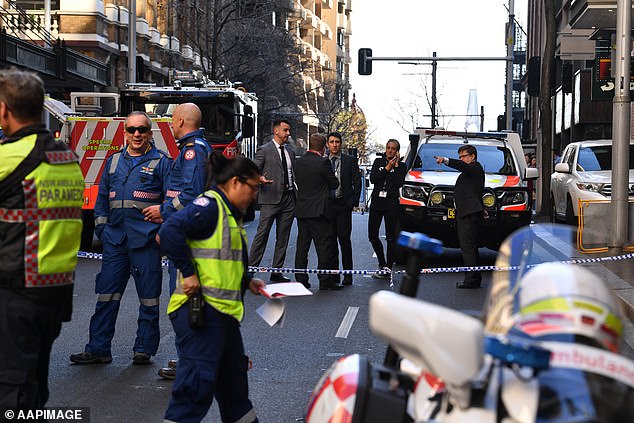 Officers were seen walking into the Grace Hotel and speaking with patrons, while others stood guard 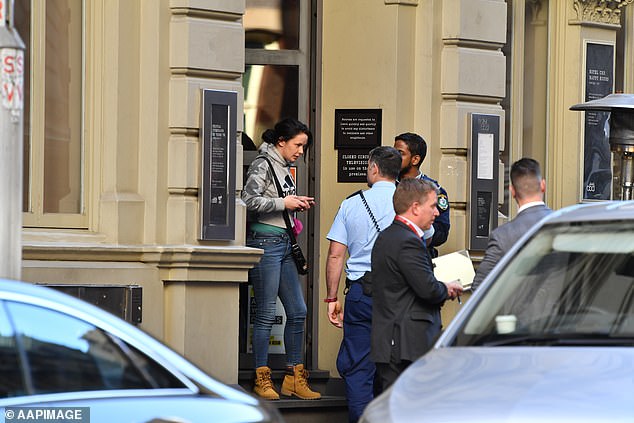 Onlookers filmed a man being dragged away from police about half an hour after the incident began to unfold.

A number of crime scenes have been established and a number of road closures are in place, which is believed to have significant impact on traffic and public transport this afternoon, police said in a statement.

‘All lanes of King Street are closed from Clarence Street to York Street. Traffic in the area is heavy, and motorists are advised to use an alternative route,’ they said.

‘Emergency services are on site, and traffic crews are responding.’

A gripping photograph shows the moment a brave onlooker holding a wicker chair prepared himself to restrain a crazed knifeman in Sydney.

The man can be seen outside the Grace Hotel on the corner of Clarence Street and King Street, as the knifeman, believed to be about 25, clutches his knife tightly. 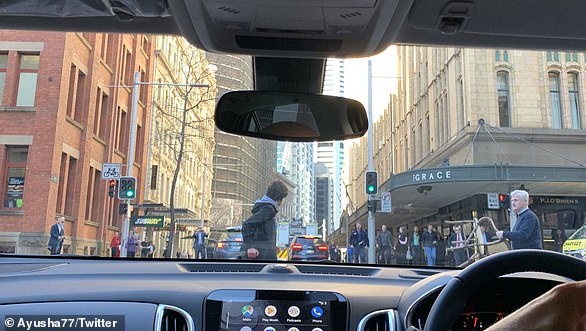