At least seven people have died as heavy rain hit the Riviera coasts of France and Italy, as well as parts of western Greece, causing huge floods and trapping travellers in their cars.

Some roads remained closed on Monday on the French Riviera, and rivers were still rising in Italy after the weekend flooding.

The administration for France’s Var region said four people died, including a couple in their 70s whose car got submerged.

A man in a hi-vis vest is pictured wading his way through the flooded streets after the Po river in Pavia, Italy burst its banks 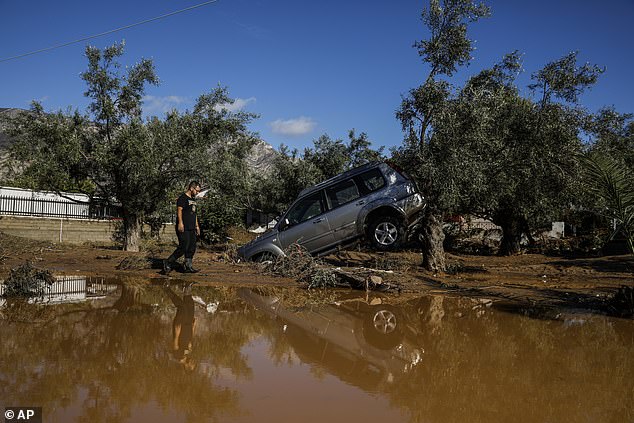 A man walks past a car moved by the force of flood water after storms in Kineta village, about 42 miles west of Athens

Another died after a French rescue boat sank in the Mediterranean and another was found dead in a car.

In Greece, the bodies of the two men believed to be tourists were recovered late on Sunday and early Monday near the port of Antirio, 155 miles west of Athens after a sailboat they were using was caught in the severe weather.

In northern Italy, a woman was found dead after the Bomida river swept away her car. 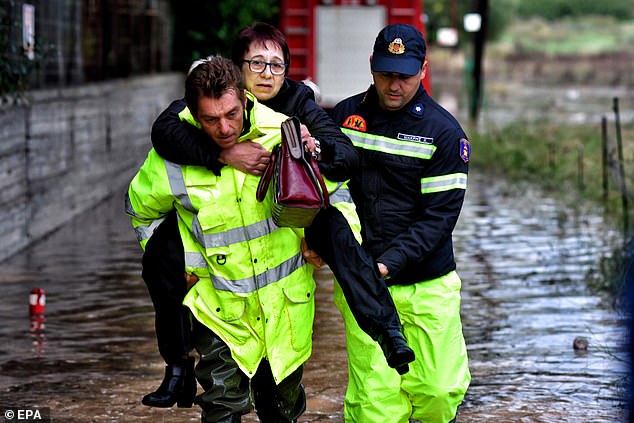 Firemen remove a woman from a flooded road in the village of Kineta, Greece. Heavy rain hit the Riviera coasts of France and Italy , as well as parts of western Greece 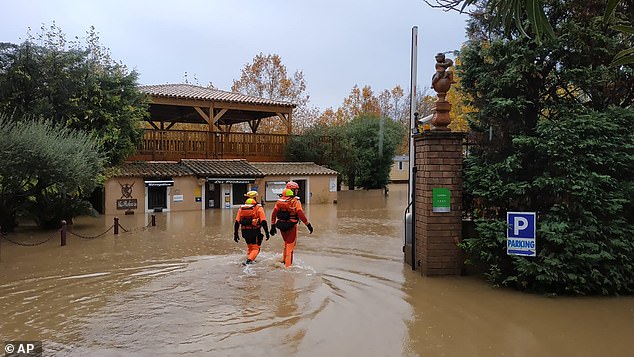 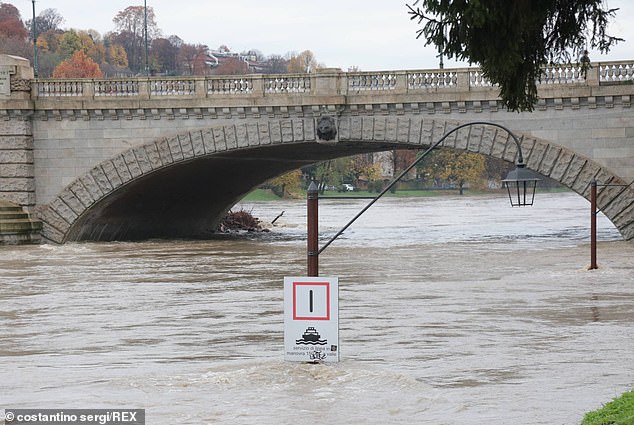 Flooding affecting the River Po in Turin, after heavy rains pounded France and Italy over the weekend 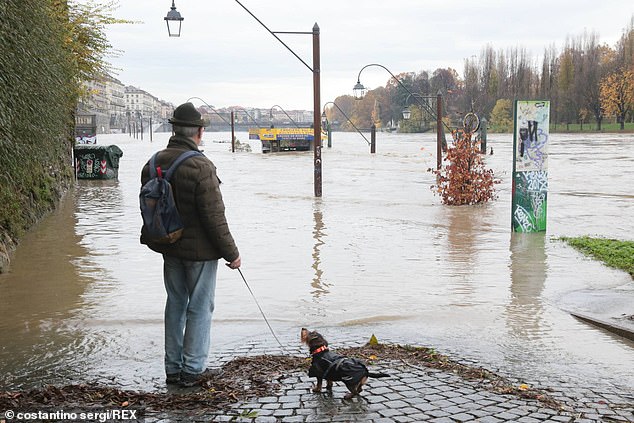 A man surveys the state of flooding in Turin, Italy while walking his dog near the River Po

Rescuers are also searching for possible victims after a landslide caused the collapse of a stretch of an elevated road near the flooded city of Savona.

Firefighter commander Emanuele Gizzi told SKY TG24 on Monday that “we still don’t have the certainty that there is absolutely no one” missing.

Drivers who witnessed the collapse were able to stop in time. 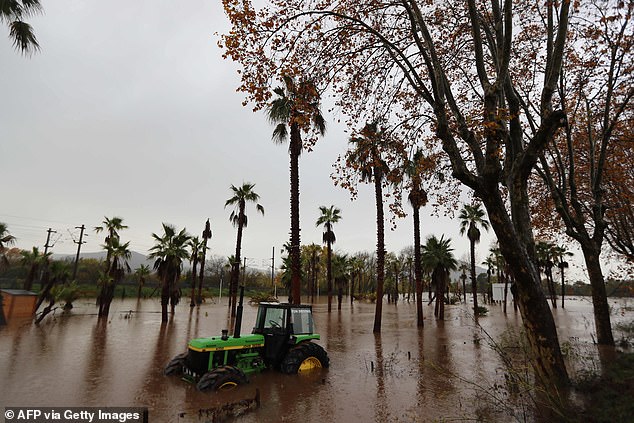 A tractor had to be abandoned in Roquebrune-sur-Argens, south eastern France. The water is seen going halfway up the tractor’s tyres 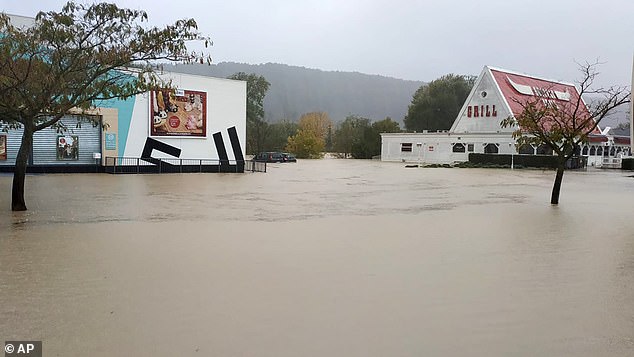 Photgraph showing the heavily flooded streets of Trans-en-Provence, France after a weekend of heavy rainfall caused flooding across western Europe 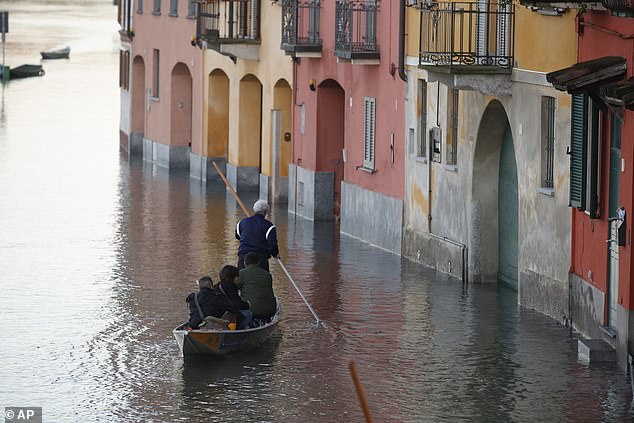 People stand on a boat as water reaches the houses after the Ticino river overflowed its banks, in Pavia, Italy 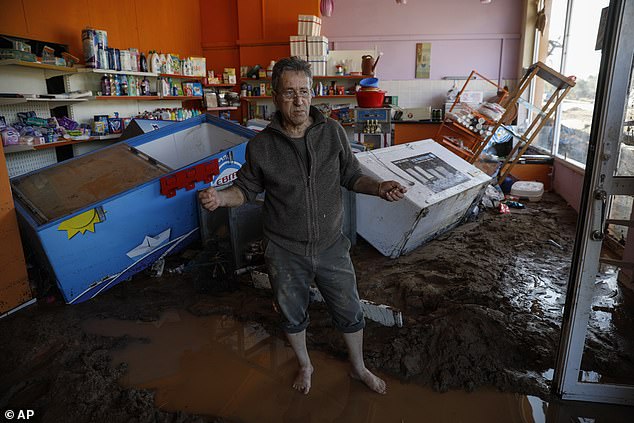 Dimitris Siskos, 77, stands inside his destroyed shop after storms in Kineta village 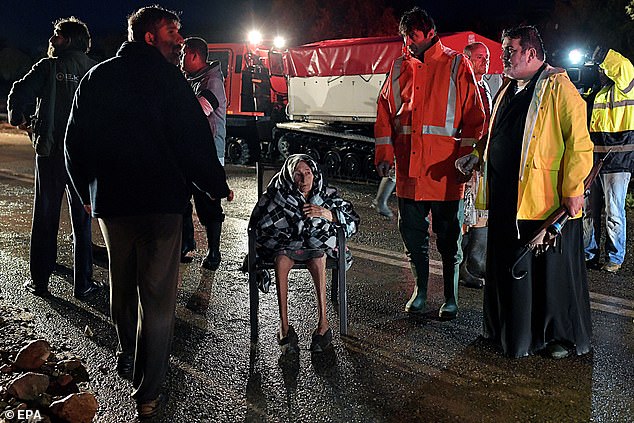 Elderly people are evacuated from their homes in the village of Kineta, Greece, 25 November 2019

There were no reports of witnesses seeing vehicles fall with the roadway, but the search continued as a precaution.

Meanwhile, the level of the Ticino River in the Lombard city of Pavia was continuing to rise, flooding streets by about 15cm and forcing some residents to evacuate.

In France, rivers started receding slowly but many families who evacuated still could not return home.

Authorities worked to restore electricity and clear roads of fallen trees and mud. 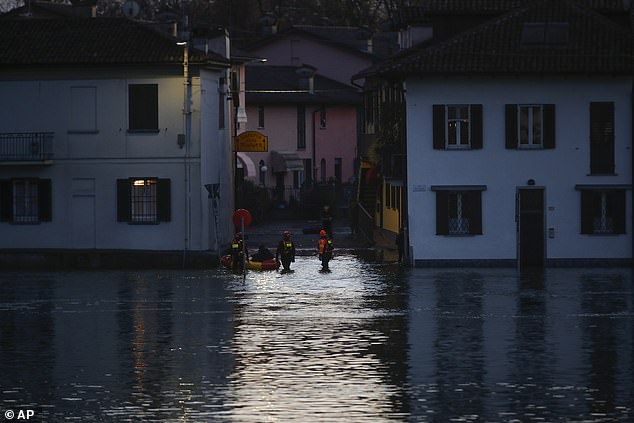 Volunteers push a small dinghy boat as water reaches the houses after the Ticino river overflowed its banks, in Pavia, Italy 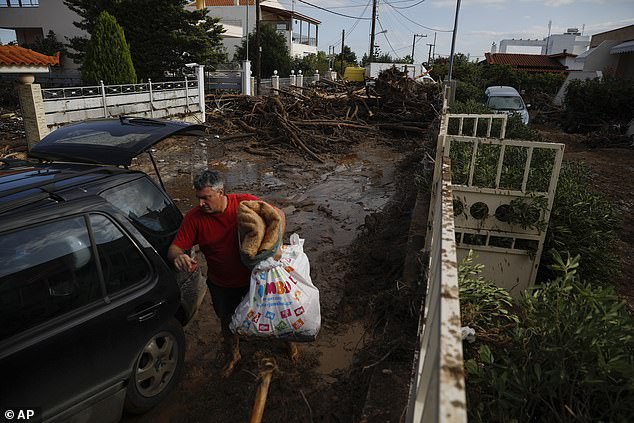 Dimitris Kalogeras, 48, carries his belonging from his damaged house to his car after flooding and mudslides hit Kineta, Greece 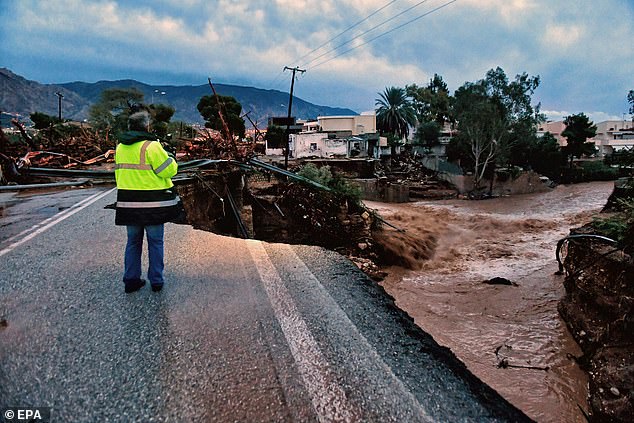 The storm named ‘Gyrionis’ triggered heavy rainfall in the region of Attica and other parts of Greece causing damages in homes and roads, including this bridge in Kineta 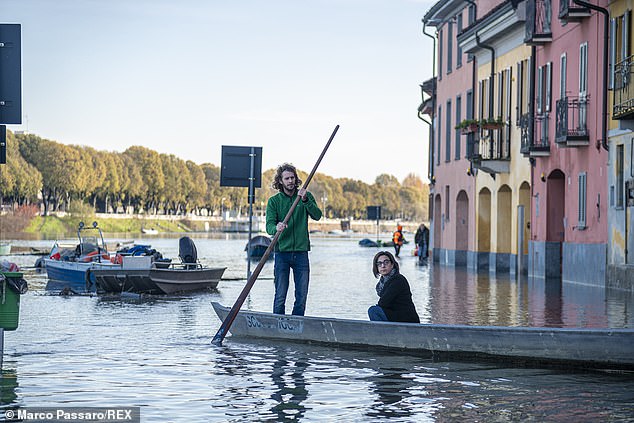 A man and a woman travel on a gondola after the Ticino River causes flooding in Pavia, Italy

In Greece, hundreds of homes were flooded following an overnight storm that affected areas west of Athens.

Torrential rain and mudslides caused the closure of the road linking the Greek capital to the western port city of Patras.

The worst flooding occurred at the seaside resort of Kineta, where mudslides came from a nearby forest fire-damaged hillside.

Several dozen people trapped in their cars and in flooded homes were rescued by the fire service.