By mid-February, supporters of Atalanta were growing rather fond of this new normal.

After decades on the fringes of Italian football, the Serie A club had muscled their way on to Europe’s top table. And in their maiden Champions League adventure, Gian Piero Gasperini’s ragtag squad made history.

They became the first team to lose their first three group games and still reach the knockout stage. All while playing the fearless, attacking football that has characterised this modern miracle. 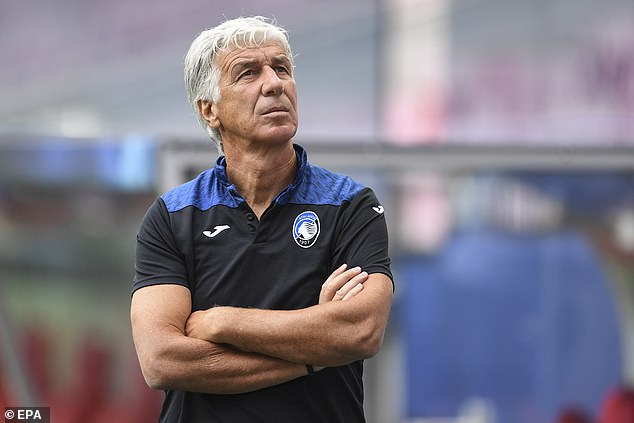 Under Gian Piero Gasperini, Atalanta have embarked on an unlikely Champions League run

And so on February 19, more than 40,000 supporters left the city of Bergamo and the wider region, travelling 35 miles to the San Siro — Atalanta’s adopted home — for their last-16 first-leg win over Valencia. The tremors of that night are still being felt around Europe.

In Milan a ‘biological bomb’ exploded and by the time Atalanta returned victorious from the second leg in Spain, Bergamo was in the grip of a coronavirus epidemic. It would become one of the world’s hardest-hit cities.

Hospitals and cemeteries were overwhelmed, with military vehicles soon carrying bodies to be burnt elsewhere. The city’s news-paper’s obituary section swelled from less than a page to more than 10. Every day. It is now widely believed that the crowning glory of a footballing fairytale helped cause the devastation. 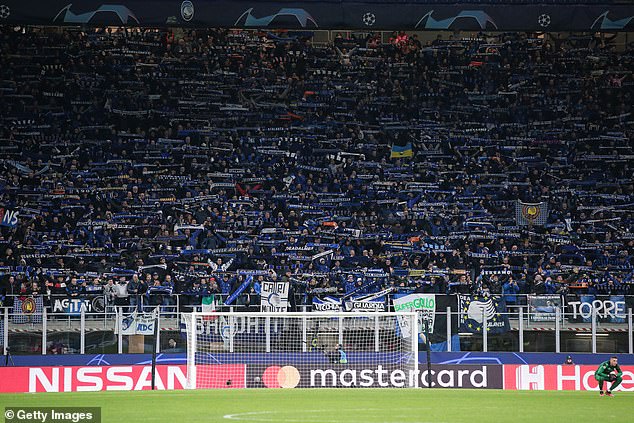 40,000 supporters travelled from Bergamo to Milan for their last-16 clash with Valencia 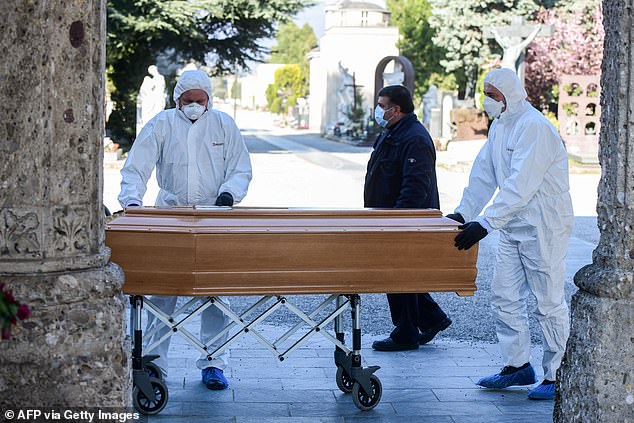 On Wednesday night, Gasperini’s side rise from the ashes to resume their European adventure — the only Italian team still standing — when they meet Paris Saint-Germain in Lisbon in the first of the quarter-finals. And the winds of change are swirling once more. 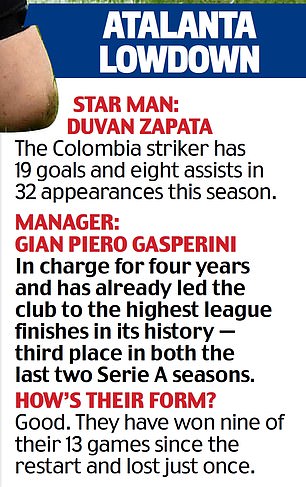 ‘People here are defined as cold people. Now I think it’s different,’ explains local reporter Carlo Canavesi. ‘The people are more united.’ And for Atalanta, a sense of destiny is bubbling — maybe death and devastation can give way to an historic triumph.

‘The people here are now saying nothing is impossible,’ Canavesi adds. ‘They believe they can win the Champions League.’

A big screen would usually be erected in Bergamo city centre. On Wednesday night, though, most are expected to watch from home. Normality is returning but scars of the virus remain.

Bergamo is a city of only 120,000 people, its team a blend of young talent, journeymen and signings from the shadows. Their stadium failed to meet UEFA standards and their wage bill (around £30million) is less than Neymar’s yearly salary. But under Gasperini they have become one of the continent’s most exciting teams. 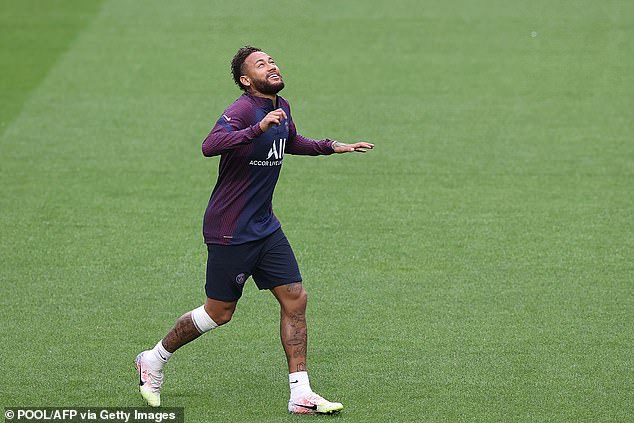 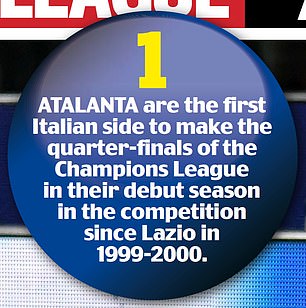 Not much embodies Atalanta’s abandon better than their 8-4 aggregate victory over Valencia, when they scored four home and away. On Wednesday, however, they will miss Josip Ilicic. The 32-year-old scored all four goals in the second leg. He auctioned off the match ball to help the fight against Covid-19 and is the club’s top scorer.

But he will not feature in Lisbon, with reports suggesting he has returned to Slovenia amid struggles with his mental health. ‘We miss Ilicic very much,’ said coach Gasperini.

Nothing illustrates the grim spread of Covid-19 better than the three weeks between those two legs against Valencia. Before the San Siro meeting on February 19, Italy had only three cases. By the time Atalanta flew to Spain on March 9, Bergamo was part of a quarantine zone and the second leg was behind closed doors.

After that 4-3 win at a deserted Mestalla, Atalanta’s squad held up a shirt which read: ‘Bergamo, this is for you. Never give up.’ That day, the number of cases in the wider Bergamo province reportedly reached 1,472. ‘As soon as we touched down in Bergamo, that happiness vanished almost completely,’ said defender Mattia Caldara. ‘To find the streets empty was a blow to the heart.’

Over the following months, around 6,000 excess deaths in the area could be attributed to coronavirus. Meanwhile, more than a third of Valencia’s playing and backroom staff later tested positive and Spain’s total cases soon outstripped Italy’s. 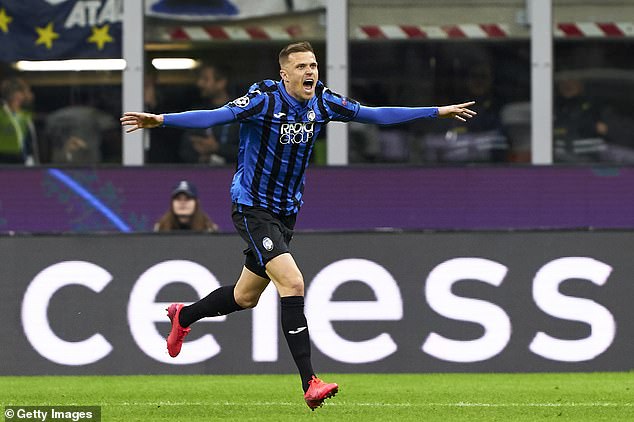 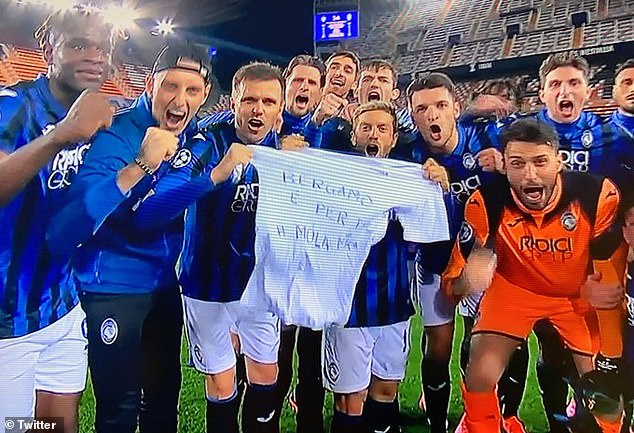 Players held up shirt which read: ‘Bergamo, this is for you. Never give up.’ after win in Valencia

By April, when Bergamo should have been preparing for a first Champions League quarter-final, sirens and church bells had become the soundtrack to the city. It is claimed that at one point the virus was taking lives at a rate of nearly one every 30 minutes.

But a strong bond exists between Atalanta and its city, where every baby is sent a kit and two bottles of milk. So as the virus spread, Bergamo came together. Among the gestures, Atalanta bought equipment for a new field hospital. Ultras helped build it in 10 days. 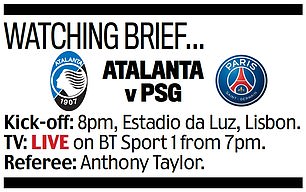 And then, 103 days after that first leg, football returned. Some Atalanta supporters chanted ‘shame’, opposing the return at a time when there were not enough tests for medical staff.

Now, though, the mood has changed. Last month, for the first time in 137 days, the intensive care unit of Bergamo’s main hospital was Covid-free. And, given the horror of recent times, the biggest game in Atalanta’s history now carries even more weight.

‘Everyone wants to cancel the past,’ Canavesi says. ‘And Atalanta is an important way to do this.’