Atalanta in dreamland: How club with a budget like Burnley’s reached Champions League

As Atalanta prepare for their first ever test in the Champions League in their 112-year history, most of the club’s fans are still dreaming.

Atalanta, who have been relegated from Serie A three times in the 21st century, have defied the odds to rise to Europe’s top table ahead of their Champions League bow away at Dinamo Zagreb on Wednesday night.

It has been quite the journey for the small club based in Bergamo, a city nestled by the Alps in northern Italy, and one that will live long in the memory of Italian football. It is one of the ultimate tales of the underdog. 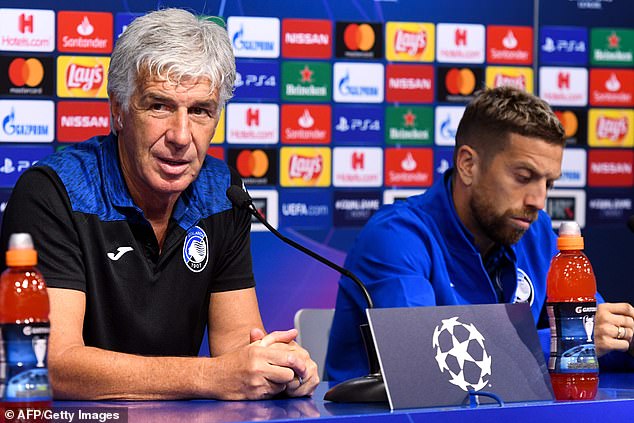 Since his appointment in 2016, manager Gian Piero Gasperini has led an Atalanta revolution

Atalanta were relegated from Serie A back in 2003, 2005 and 2010 and had then failed to finish in the top 10 before Gian Piero Gasperini was appointed manager in the summer of 2016 after leaving Genoa.

Here is where their journey really started. The managerial appointment was seen as a sideways step for Gasperini but no one expected what would come next.

Early in his career at Atalanta, Gasperini had lost four of his opening five matches in charge and there were fears that he would be sacked – just like he had been at Italian giants Inter Milan back in 2011.

A second immediate dismissal was looming and later down the line, the manager even revealed: ‘I was on the verge of being sacked, it’s true.’

But after making some drastic changes to his formation the night before, Atalanta would end up beating Serie A powerhouse Napoli 1-0. The victory was so significant that the team were greeted by thousands of fans at Bergamo Airport. The revolution had started and three years further down the line, it continues. 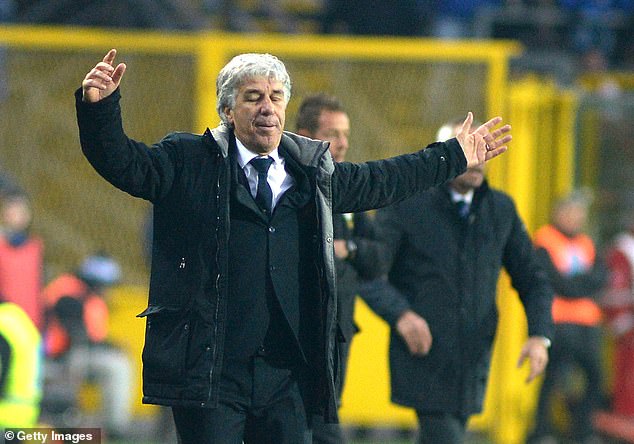 It was a tough start to life for Gasperini, who lost four out of his first five matches with Atalanta 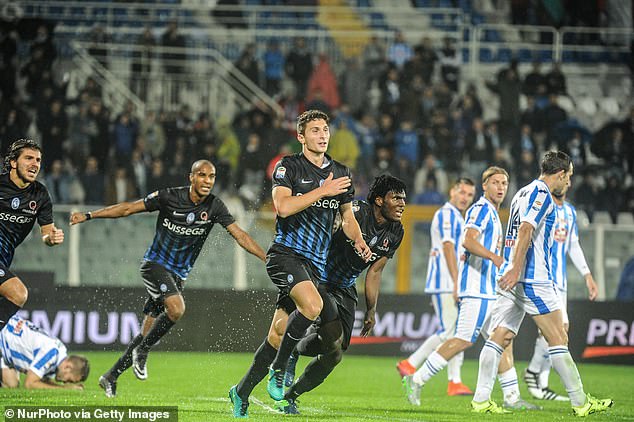 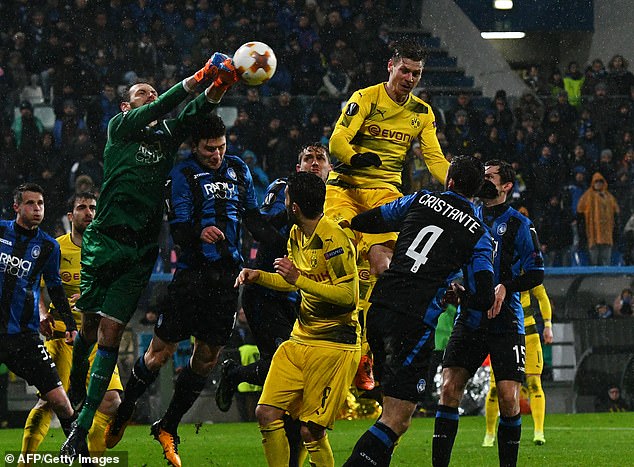 They would then beat the likes of Crotone, Inter Milan and Roma, and before they knew it Atalanta found themselves in Europa League positions.

Supporters throughout Italy thought their form would eventually take a dip but they remained relentless in their pursuit of glory and fourth spot – their highest top-flight finish since 1932 – and Europa League football followed as exciting stars emerged, including Franck Kessie and Mattia Caldara.

While they could only manage a seventh-place finish next season, they would beat the likes of Everton and Lyon to top their Europa League group before being dumped out in the round of 32 by Bundesliga giants Borussia Dortmund.

Atalanta had developed a reputation for taking big scalps and always surpassing expectations. To show how far they’ve come in such a short time, picture the likes of Bournemouth, Southampton or Burnley beating the odds with their modest budget and developing homegrown talents.

Then imagine them breaking into the Premier League’s top four and securing Champions League football from their humble beginnings. Well, that’s exactly what Atalanta have managed to achieve. 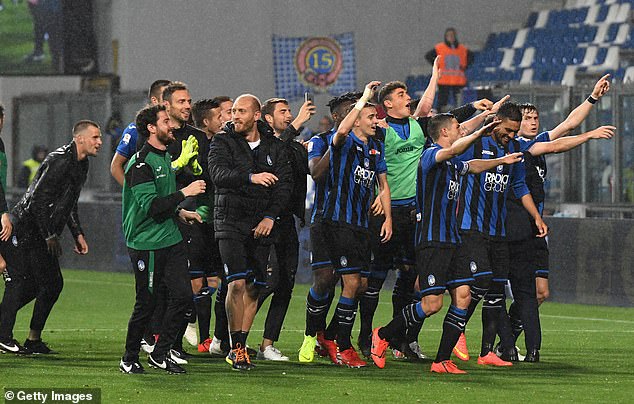 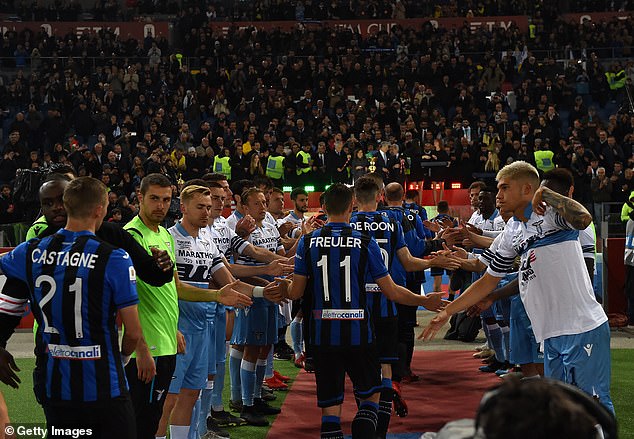 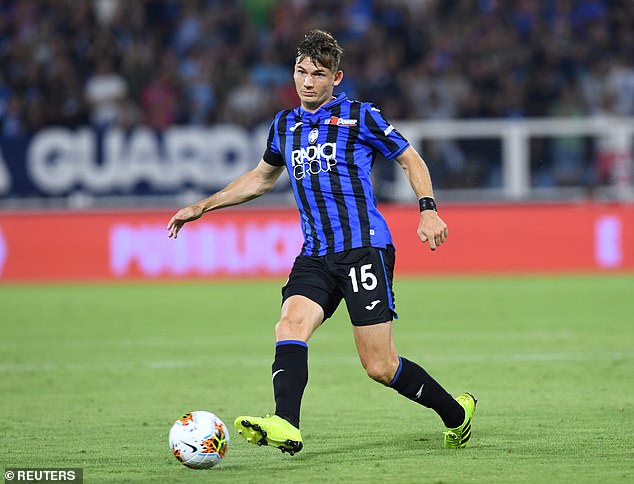 During the 2018-19 Serie A campaign, Le Dea – led up top by the likes Duvan Zapata, who scored 23 goals in 37 appearances last season – would conquer Inter, Lazio, Napoli and Co while earning a very respectable draw at Juventus, who would go on to win their eighth consecutive Italian top-flight title.

Atalanta went on an emphatic winning run between March and May, going unbeaten in their last 13 matches and scoring the most goals in Serie A (77) to record a third-place finish and qualify for their first ever Champions League campaign.

And if that wasn’t special enough, they nearly got their hands on the Coppa Italia but were beaten 2-0 by Lazio in the final.

Atalanta placed themselves on the European map and did so with a journeyman manager in Gasperini and a band of outcasts leading the way, including former Middlesbrough midfielder Marten de Roon and ex-Aston Villa goalkeeper Pierluigi Gollini.

To highlight their minnow status and their remarkable European voyage, they have been forced to play their Champions League matches at the San Siro as their Atleti Azzurri d’Italia stadium, which holds just 21,300 fans, is currently being renovated and does not meet UEFA requirements. 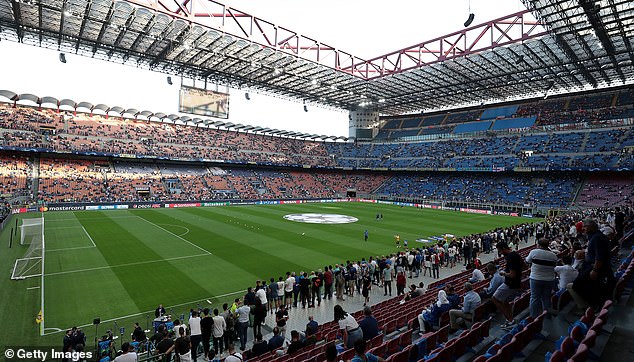 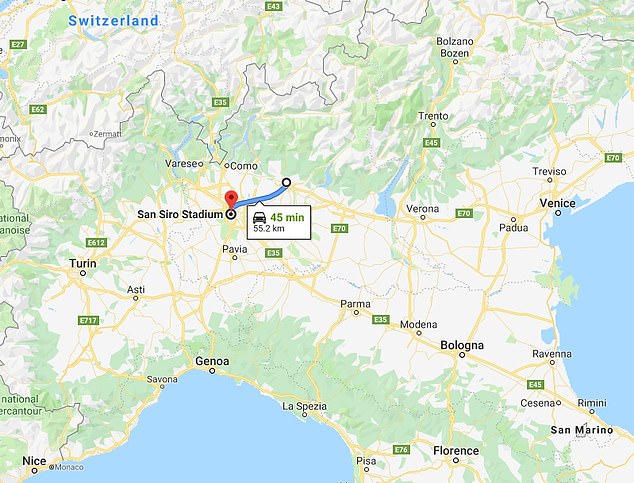 So Atalanta’s squad, which was boosted by the arrival of Luis Muriel this summer, will face a 60km coach ride to play their games in Inter and AC Milan’s famous San Siro stadium, which holds a capacity of just over 80,000.

The question is, can they mix it with Europe’s elite? They were placed in pot four ahead of the group-stage draw but will fancy their chances of springing a surprise as they prepare to battle it out with Premier League champions Manchester City, Ukrainian outfit Shakhtar Donetsk and Croatian side Dinamo Zagreb.

There could be no better way of becoming the talk of the town by shocking Pep Guardiola’s formidable City side, who start the competition as favourites, next month.

However, first up for Atalanta is Zagreb and the result could already go a long way in determining their European fate this season.

They have stunned Italian football, now it’s time for Gasperini and Co to continue punching above their weight in the Champions League. 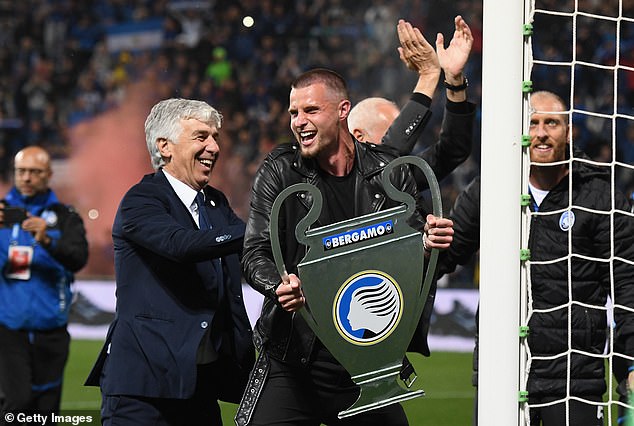