The Attorney General today published his eagerly awaited updated legal advice after Theresa May struck an 11th hour deal with the EU that she had hoped would get her ‘last chance’ Brexit deal over the line.

Geoffrey Cox’s advice will be key in determining whether Tory Brexiteers and the DUP back her new deal.

But, in a damning assessment of the text,  Mr Cox concluded in his final paragraph the legal risk of Britain trapped ‘remains unchanged’.

He said the new concessions only ‘reduce’ the risk Britain could be trapped in the backstop ‘indefinitely and involuntarily’. 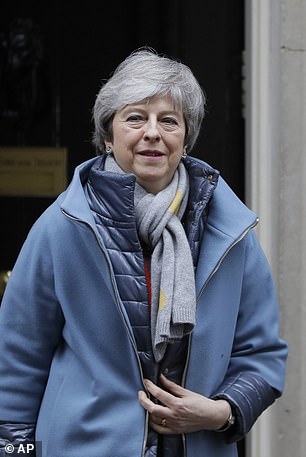 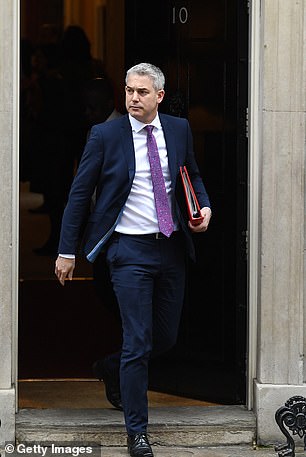 Theresa May leaves from Downing Street in London today

2. As the preamble states, the Joint Instrument is an instrument relating to the Withdrawal Agreement which was made in connection with its conclusion and is accepted by both parties. Therefore, pursuant to the principle set out in Article 31 of the Vienna Convention on the Law of Treaties, which is widely accepted as reflecting customary international law, the Joint Instrument has binding legal effect as a document that is to be taken as an authentic interpretation of the Withdrawal Agreement.

3. The Unilateral Declaration sets out the United Kingdom’s position on the Withdrawal Agreement and the Joint Instrument. A unilateral declaration by one party to a bilateral agreement constitutes an authentic interpretation of the treaty if it is accepted by the other party. While it is not an agreed document, it too has legal status as an interpretative document, and will be lodged with the depositary of the Withdrawal Agreement and form part of the context of the treaty in accordance with the principle set out in Article 31 of the Vienna Convention.

4. The Joint Instrument essentially puts the commitments in the letter from Presidents Tusk and Juncker of 14 January 2019 into a legally binding form and provides, in addition, useful clarifications, amplifications of existing obligations and some new obligations, which in certain significant respects would facilitate the effective enforcement of the UK’s rights in the event of a breach of the good faith and best endeavours obligations by the EU. 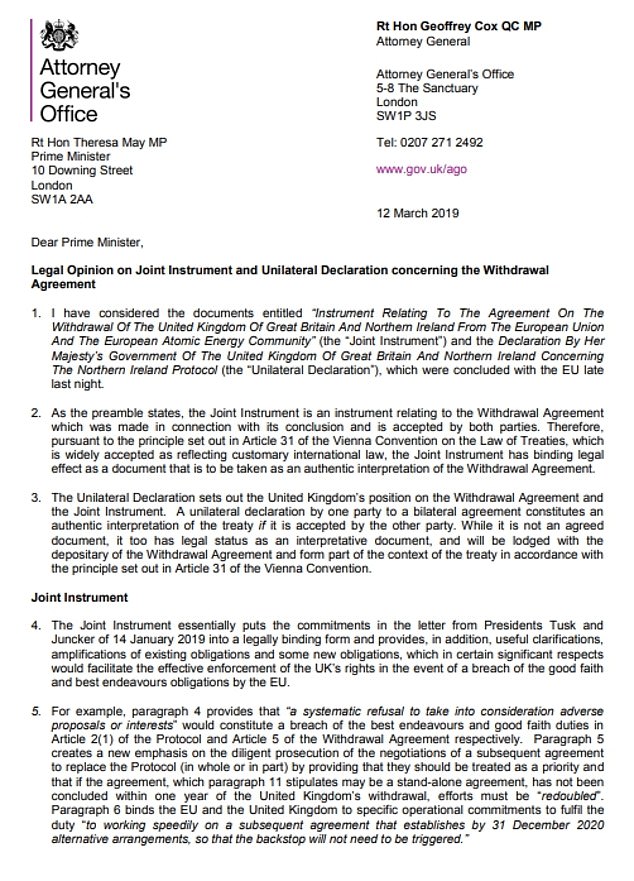 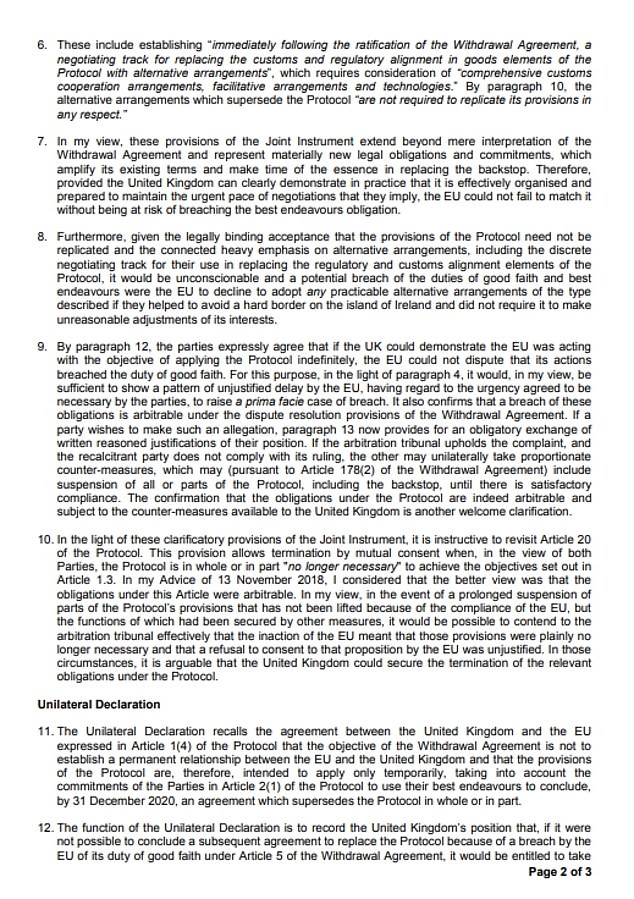 5. For example, paragraph 4 provides that ‘a systematic refusal to take into consideration adverse proposals or interests’ would constitute a breach of the best endeavours and good faith duties in Article 2(1) of the Protocol and Article 5 of the Withdrawal Agreement respectively. Paragraph 5 creates a new emphasis on the diligent prosecution of the negotiations of a subsequent agreement to replace the Protocol (in whole or in part) by providing that they should be treated as a priority and that if the agreement, which paragraph 11 stipulates may be a stand-alone agreement, has not been concluded within one year of the United Kingdom’s withdrawal, efforts must be ‘redoubled’. Paragraph 6 binds the EU and the United Kingdom to specific operational commitments to fulfil the duty ‘to working speedily on a subsequent agreement that establishes by 31 December 2020 alternative arrangements, so that the backstop will not need to be triggered.’

7. In my view, these provisions of the Joint Instrument extend beyond mere interpretation of the Withdrawal Agreement and represent materially new legal obligations and commitments, which amplify its existing terms and make time of the essence in replacing the backstop. Therefore, provided the United Kingdom can clearly demonstrate in practice that it is effectively organised and prepared to maintain the urgent pace of negotiations that they imply, the EU could not fail to match it without being at risk of breaching the best endeavours obligation.

8. Furthermore, given the legally binding acceptance that the provisions of the Protocol need not be replicated and the connected heavy emphasis on alternative arrangements, including the discrete negotiating track for their use in replacing the regulatory and customs alignment elements of the Protocol, it would be unconscionable and a potential breach of the duties of good faith and best endeavours were the EU to decline to adopt any practicable alternative arrangements of the type described if they helped to avoid a hard border on the island of Ireland and did not require it to make unreasonable adjustments of its interests.

9. By paragraph 12, the parties expressly agree that if the UK could demonstrate the EU was acting with the objective of applying the Protocol indefinitely, the EU could not dispute that its actions breached the duty of good faith. For this purpose, in the light of paragraph 4, it would, in my view, be sufficient to show a pattern of unjustified delay by the EU, having regard to the urgency agreed to be necessary by the parties, to raise a prima facie case of breach. It also confirms that a breach of these obligations is arbitrable under the dispute resolution provisions of the Withdrawal Agreement. If a party wishes to make such an allegation, paragraph 13 now provides for an obligatory exchange of written reasoned justifications of their position. If the arbitration tribunal upholds the complaint, and the recalcitrant party does not comply with its ruling, the other may unilaterally take proportionate counter-measures, which may (pursuant to Article 178(2) of the Withdrawal Agreement) include suspension of all or parts of the Protocol, including the backstop, until there is satisfactory compliance. The confirmation that the obligations under the Protocol are indeed arbitrable and subject to the counter-measures available to the United Kingdom is another welcome clarification.

10. In the light of these clarificatory provisions of the Joint Instrument, it is instructive to revisit Article 20 of the Protocol. This provision allows termination by mutual consent when, in the view of both Parties, the Protocol is in whole or in part ‘no longer necessary’ to achieve the objectives set out in Article 1.3. In my Advice of 13 November 2018, I considered that the better view was that the obligations under this Article were arbitrable. In my view, in the event of a prolonged suspension of parts of the Protocol’s provisions that has not been lifted because of the compliance of the EU, but the functions of which had been secured by other measures, it would be possible to contend to the arbitration tribunal effectively that the inaction of the EU meant that those provisions were plainly no longer necessary and that a refusal to consent to that proposition by the EU was unjustified. In those circumstances, it is arguable that the United Kingdom could secure the termination of the relevant obligations under the Protocol.

12. The function of the Unilateral Declaration is to record the United Kingdom’s position that, if it were not possible to conclude a subsequent agreement to replace the Protocol because of a breach by the EU of its duty of good faith under Article 5 of the Withdrawal Agreement, it would be entitled to take Page 3 of 3 measures to disapply the provisions of the Protocol in accordance with the Withdrawal Agreement’s dispute resolution procedures and Article 20 to which I have referred.

13. This Unilateral Declaration, to which I understand the EU has agreed it will not object, further confirms the advice I have given at paragraphs 4-10 above.

14. For these reasons, there is no doubt, in my view, that the clarifications and amplified obligations contained in the Joint Instrument and the Declaration provide a substantive and binding reinforcement of the legal rights available to the United Kingdom in the event that the EU were to fail in its duties of good faith and best endeavours.

15.  In my letter of 13 November 2018, I advised that the Protocol would endure indefinitely in international law and could not be brought to an end in the absence of a subsequent agreement. This would remain the case even if parties were still negotiating many years later, and even if the parties believed that talks have clearly broken down and there was no prospect of a future relationship agreement.

16. I also advised that in the specific case that situation was due to the EU’s want of good faith and best endeavours, because of the difficulties of proof and the egregious nature of the conduct that would be required to establish a breach by the EU of those obligations, it would be highly unlikely that the United Kingdom could take advantage of the remedies available to it for such a breach under the Withdrawal Agreement.

17. I now consider that the legally binding provisions of the Joint Instrument and the content of the Unilateral Declaration reduce the risk that the United Kingdom could be indefinitely and involuntarily detained within the Protocol’s provisions at least in so far as that situation had been brought about by the bad faith or want of best endeavours of the EU.

18. It may be thought that if both parties deploy a sincere desire to reach agreement and the necessary diligence, flexibility and goodwill implied by the amplified duties set out in the Joint Instrument, it is highly unlikely that a satisfactory subsequent agreement to replace the Protocol will not be concluded. But as I have previously advised, that is a political judgment, which, given the mutual incentives of the parties and the available options and competing risks, I remain strongly of the view it is right to make.

19. However, the legal risk remains unchanged that if through no such demonstrable failure of either party, but simply because of intractable differences, that situation does arise, the United Kingdom would have, at least while the fundamental circumstances remained the same, no internationally lawful means of exiting the Protocol’s arrangements, save by agreement.’ 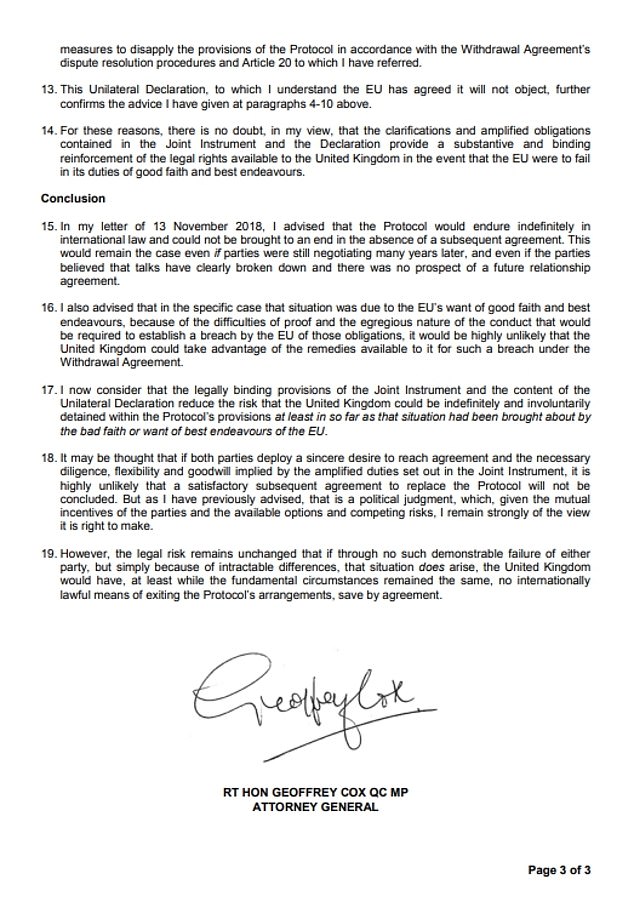 But, in a damning assessment of the text, Mr Cox said the legal risk of Britain trapped ‘remains unchanged’ and that the new concessions only ‘reduce’ the risk Britain could be trapped in the backstop ‘indefinitely and involuntarily’