Aubrey O’Day has been finding solace in her own music amid the Donald Trump Jr. scandal, according to her latest Instagram video.

The singer shared a glimpse into her daily life as she shared a video of herself listening to one of her own songs on her laptop with the caption ‘my music knows me best #dumb blonde.’

She then shared the lyrics of the track: ‘Nothin’ special bout u, everybody’s had u, u chase the life but u live a lie’.

Aubrey O’Day has posted ‘no fake sh*t’ message in Instagram video of her finding solace in her own music amid the Donald Trump Jr. scandal 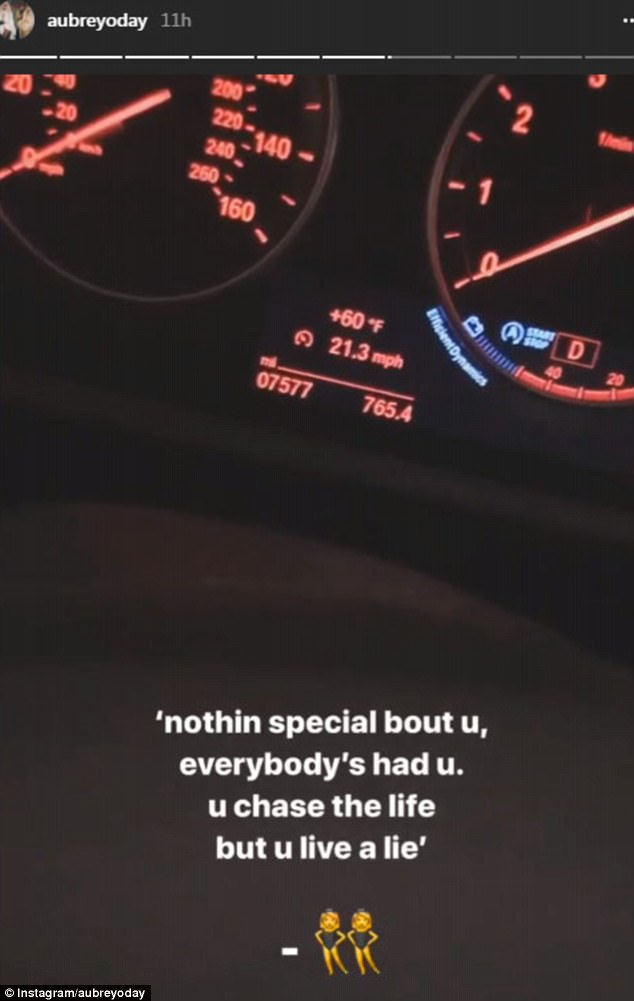 The singer shared a glimpse into her daily life as she shared a video of herself listening to one of her own songs and shared the lyrics of the track: ‘Nothin’ special bout u, everybody’s had u, u chase the life but u live a lie’ 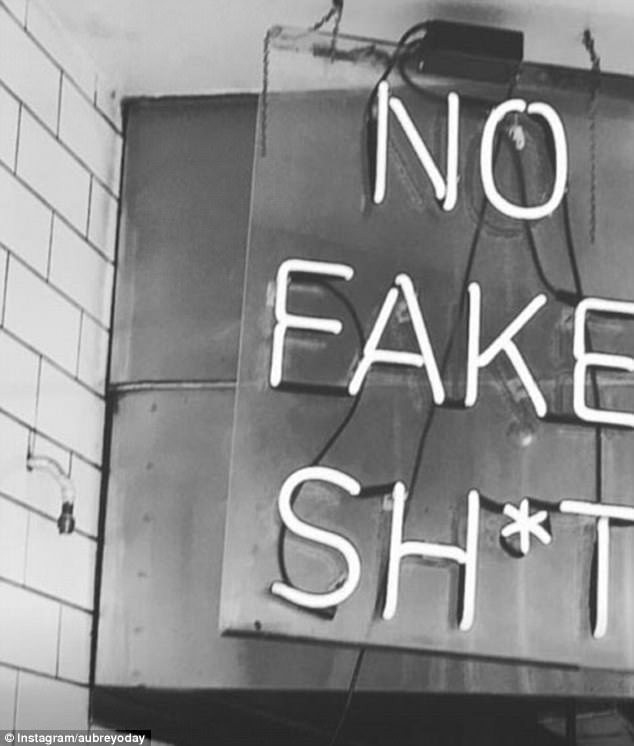 It’s not clear whether O’Day plans to release the single or who the song refers to.

O’Day then posted a photo of a neon sign which read ‘No fake s**t.’

Today’s post comes amid revelations of her affair with Donald Trump Jr. which led to the breakdown of his marriage.

Don Jr was reportedly in the shower while his phone was on the bedside table when the texts came through from O’Day, a source who worked on Celebrity Apprentice told People.

Despite filing for divorce, the pair seem to be keeping it cordial. The former model liked a series of images posted by Don Jr on Friday, which showed the businessman fishing with his son Donnie and two others.

They also both spent the weekend with their five children at Mar-a-Lago, indicating that they might be trying to give co-parenting a try.

‘Awesome day on the water with Donnie (who caught his first sailfish and then followed that up with 2 others!!!),’ the president’s eldest son wrote.

‘We went 15 for 19 on sails and caught some Mahi and skipjack as well. All sailfish released to grow bigger and make more.’ 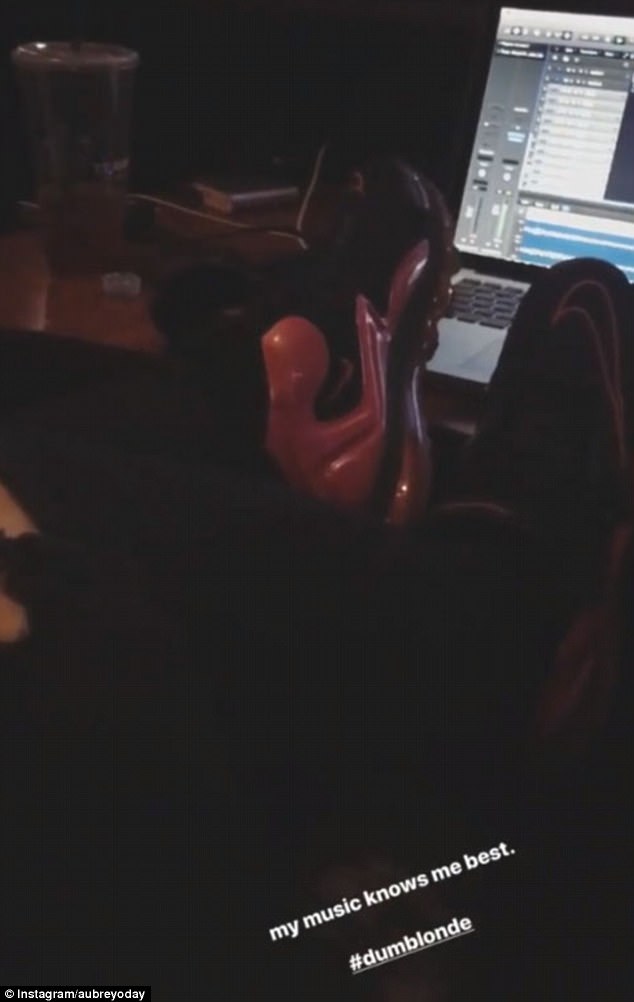 Aubrey O’Day posted an Instagram video of her finding solace in her own music amid the Donald Trump Jr. scandal with the caption ‘my music knows me best #dumb blonde.’ 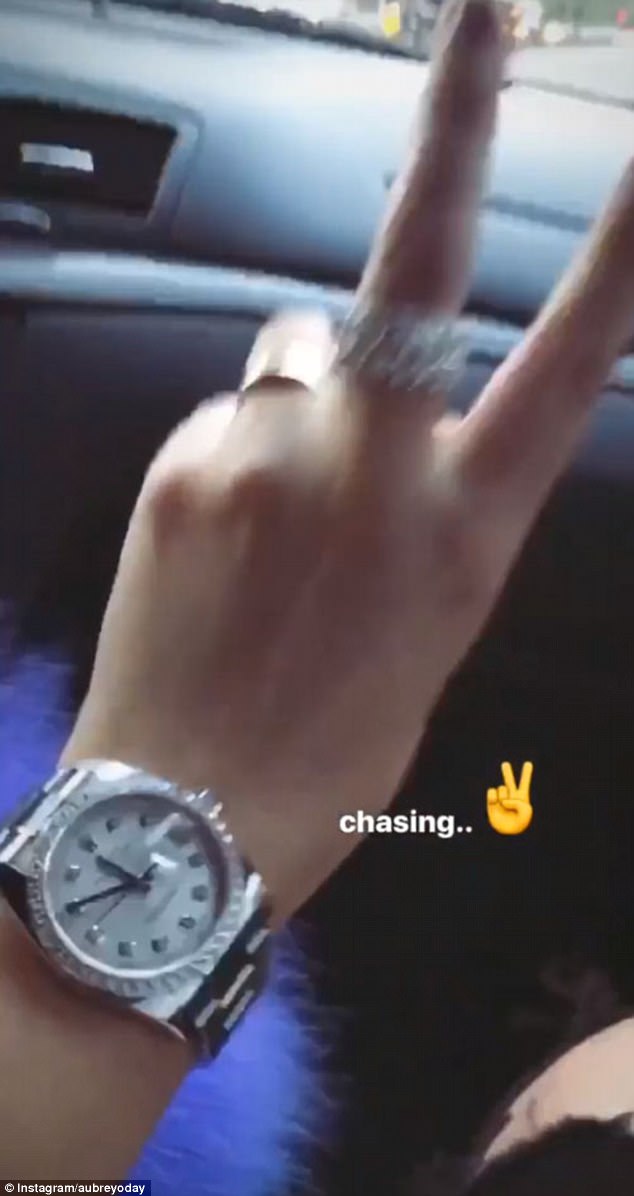 In another part of the video, she flashes a peace sign with the caption ‘chasing’

‘This is how Vanessa found out and the affair ended,’ the source said.

Shortly after she found the texts, Don Jr. abruptly ended the affair with O’Day, a source has claimed.

O’Day has hinted at her alleged affair with the president’ son on multiple occasions.

She posted a photograph of herself cozying up in bed with a mystery man back in 2012 who shares some striking similarities with Don Jr. 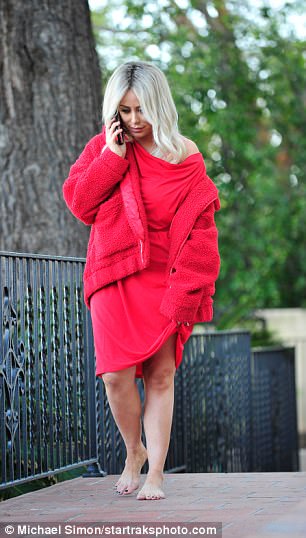 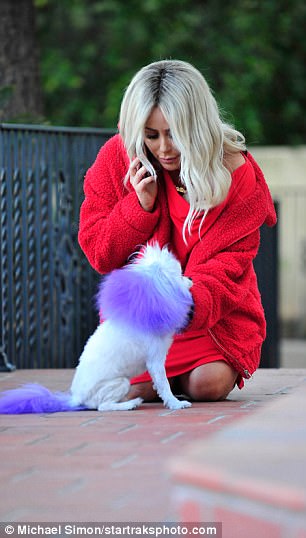 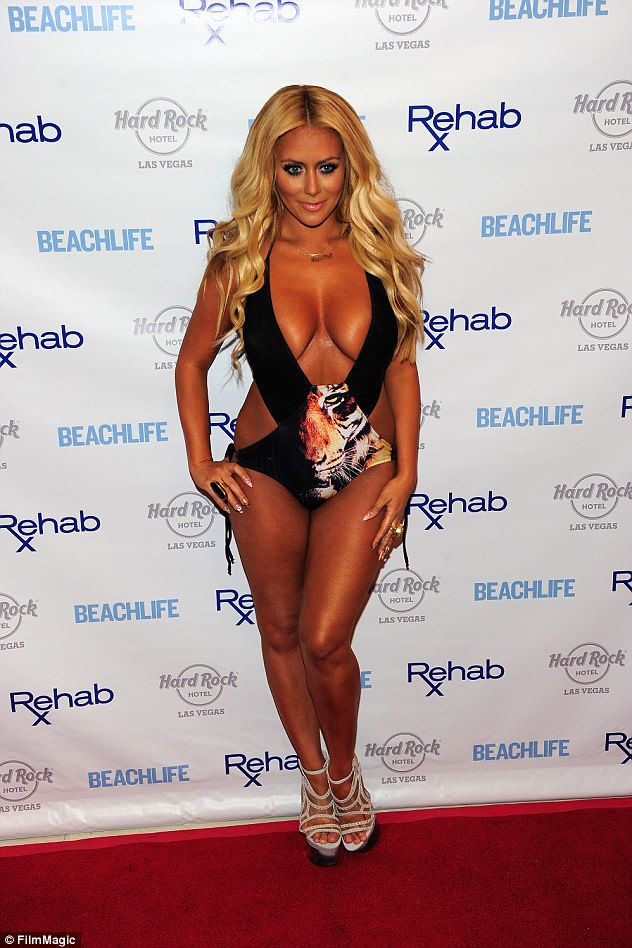 Today’s post comes amid revelations of her affair with Donald Trump Jr. which led to the breakdown of his marriage (O’Day above in June 2012) 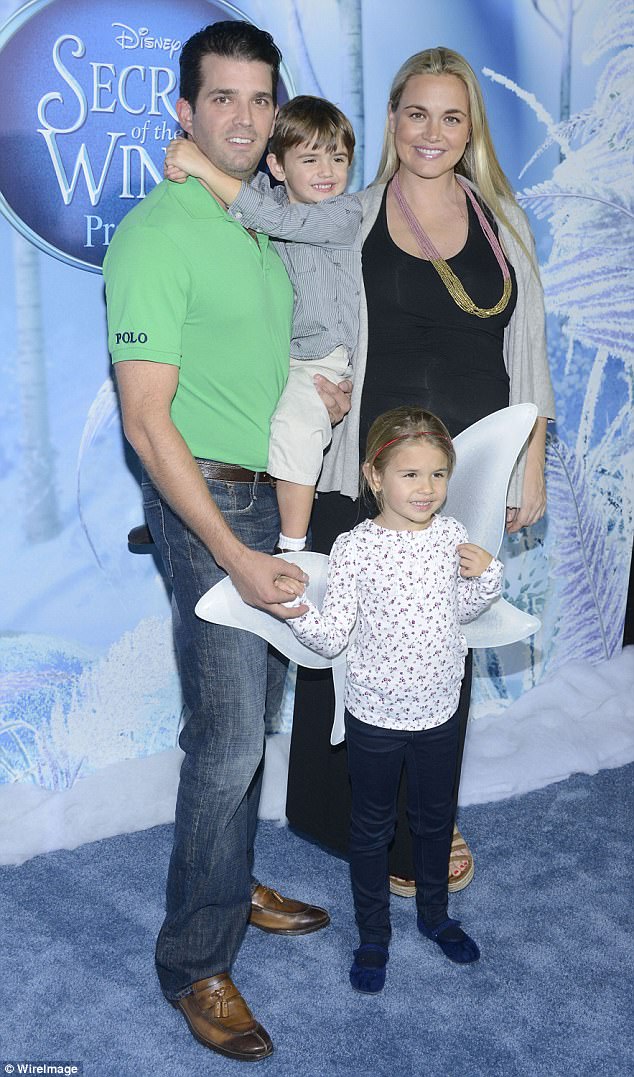 End it: Vanessa Trump (left in 2012 with husband Don Jr and Kai and Donny III) confronted O’Day about her affair 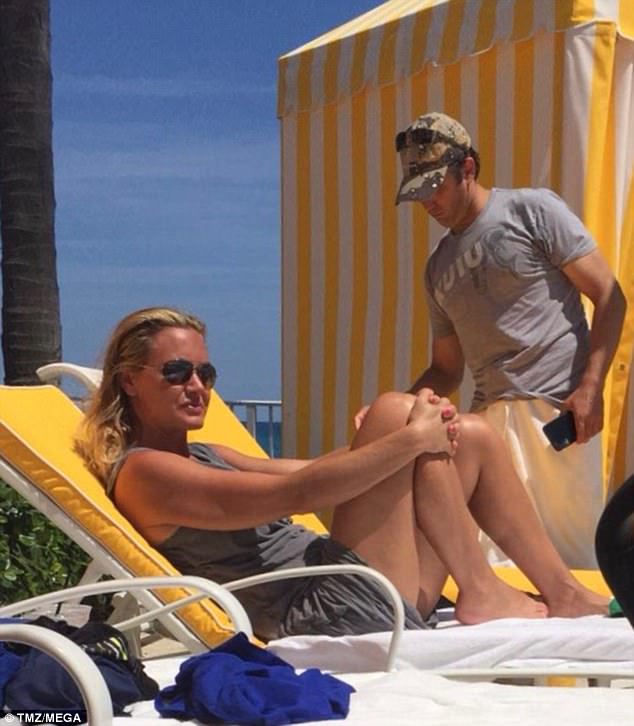 Just a few weeks before, O’Day tweeted: ‘Love when my hunny doesn’t want food, attention, or sex. Some nights its rub my feet, watch Martin, & agree w everything I say time.’

She also wrote on Twitter that she was pregnant shortly after she and Don Jr split, saying: ‘Ive been nervous to tell u this tweets, its been 3 1/2 months n hiding..But, I’m PREGNANT! Hope my baby is fearless!’

O’Day included an image of a positive pregnancy test as well, though she later revealed it was all a joke.

Arsenio Hall, who appeared alongside Don Jr and O’Day on Celebrity Apprentice, seemed to confirm the rumors on Tuesday as well when he tweeted: ‘The year @clayaiken … and I were on Celebrity Apprentice garnered great reality TV for NBC. But we both used to say that the GREATER show, was going on behind the scenes.’ 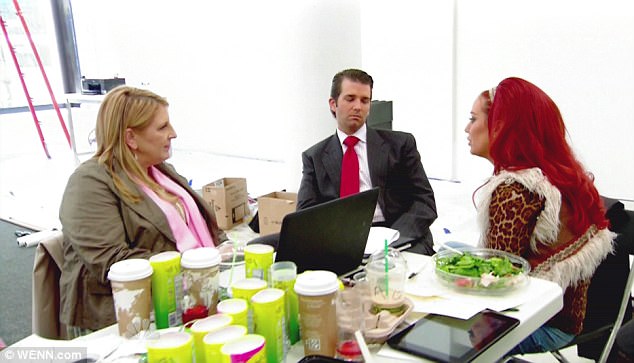 And though liking the post was as simple as a tap to her phone screen, it seemed to indicate that the estranged couple is at least keeping things amiable in their wake of the their divorce and Trump Jr’s alleged affair with Danity Kane singer Aubrey O’Day in 2011. They are pictured together on the Celebrity Apprentice, where they met 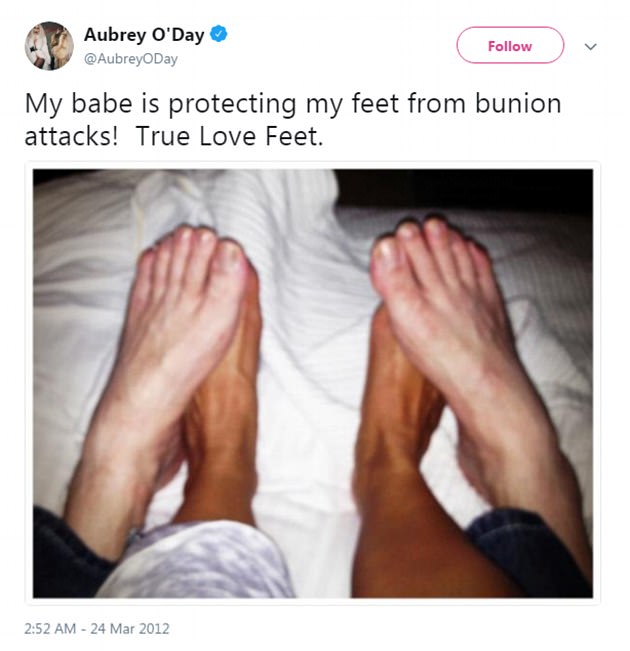 Protect and serve: Aubrey O’Day posted a photo in March 2012 of her feet being covered by the feet of another man

Romantic night in: ‘Love when my hunny doesn’t want food, attention, or sex. Some nights its rub my feet, watch Martin, & agree w everything I say,’ O’Day wrote in March 2012 (above) 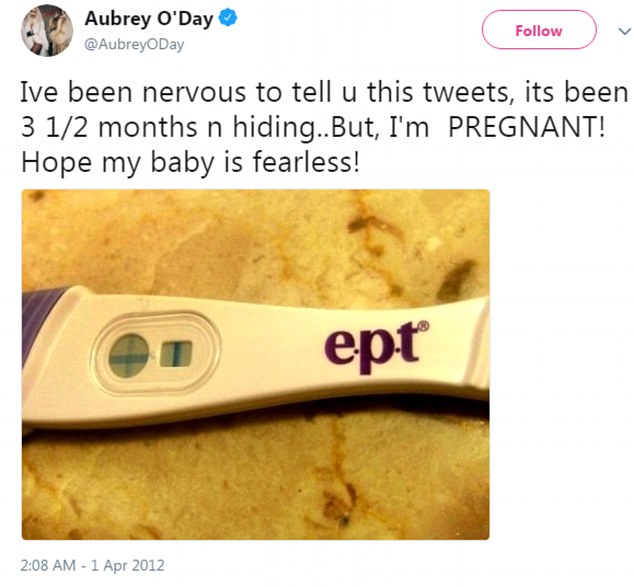 False alarm: O’Day posted the results of a pregnancy test soon after the split as a joke (above)

US Weekly revealedVanessa confronted O’Day after finding love notes that her husband sent to O’Day.

‘She called Aubrey with her kids on the phone,’ revealed a source.

Vanessa had three children at that point – daughter Kai, son Donny III and newborn Tristan – and was pregnant with her fourth child, son Spencer.

Another source stated: ‘Vanessa went crazy and was super jealous.’

The ploy eventually worked, but left O’Day in a state of shock according to one person, who said: ‘He told her it was over with his wife, that they were separated and he didn’t love her — all of that stuff. Aubrey fell for him hard. She thought they were going to be together for real

Another source explained: ‘As far as what Don told Aubrey, he was done with Vanessa. He already started putting things in place, like setting up a place in NYC to live.

‘Don would talk to Aubrey about how he was miserable in his marriage and how Vanessa was so controlling and paranoid about him leaving. In his mind, he was going to be separated with Vanessa and be with Aubrey.’