Rudolph might not be needed this year, after the Met Office revealed the Northern Lights will be particularly strong around the North Pole on Christmas Eve.

The Northern Lights are caused by charged particles from solar winds flung from our star, colliding with the Earth’s magnetic field.

A huge solar storm that erupted on the Sun on Monday, December 20, could make the aurora more intense than usual, according to the UK Met Office.

It was caused by a coronal mass ejection (CME), which is an eruption of magnetically charged particles and plasma in the star’s corona – the outermost layer.

The CME from Monday will hit the Earth today, and will cause intense aurora into tomorrow night, according to space weather forecasters.

Rudolph might not be needed this year, after the Met Office revealed the Northern Lights will be particularly strong around the North Pole on Christmas Eve. Stock image

A huge solar storm that erupted on the Sun on Monday, December 20, could make the aurora more intense than usual, according to the UK Met Office. Archive image

A solar flare is a tremendous explosion on the Sun that happens when energy stored in ‘twisted’ magnetic fields (usually above sunspots) is suddenly released.

In a matter of just a few minutes they heat material to many millions of degrees and produce a burst of radiation across the electromagnetic spectrum, including from radio waves to x-rays and gamma rays.

Solar flares are different to ‘coronal mass ejections’ (CMEs), which were once thought to be initiated by solar flares.

CMEs are huge bubbles of gas threaded with magnetic field lines that are ejected from the Sun over the course of several hours.

While the Northern Lights might be beautiful, an intense CME can trigger geomagnetic storms that disrupt satellite services and even knock out power grids.

However, this eruption is not expected to cause any issues this weekend as the storm is only expected to be minor, or weak, when it hits the Earth.

The CME erupted from the Sun at 11:36 GMT on Monday, caused by a powerful solar flare that erupted from a sunspot.

‘The auroral oval is likely to be slightly enhanced at high latitudes from the 22nd to 24th due to coronal hole geomagnetic activity enhancement, and the chance of a weak coronal mass ejection arriving on the 23rd,’ the Met Office said.

The Sun moved into the active phase of its cycle in 2020, which has already resulted in an increase in flares and solar storms reaching the Earth.

It will peak around 2025, around the time the ESA Solar Orbiter is expected to fly within 26 million miles of our star.

The Met Office told MailOnline: ‘We are seeing a gradual increase in solar activity and associated space weather.

‘Over the next few years we can expect increasing solar activity, with a corresponding increase in space weather events affecting Earth and the near-Earth space environment.’

In the past week alone, a number of regions have been particularly active, according to the European Space Agency Space Weather Network.

When a solar storm is particularly strong, it can cause the Northern Lights to move much further south, with an even in November visible as far south as Devon.

It is expected that there will be more intense CMEs and Solar Flares over the coming few years, as the Sun ramps up to its most energetic period.

A solar flare is an intense burst of radiation coming from the release of magnetic energy associated with sunspots (areas that appear dark on the Sun’s surface). 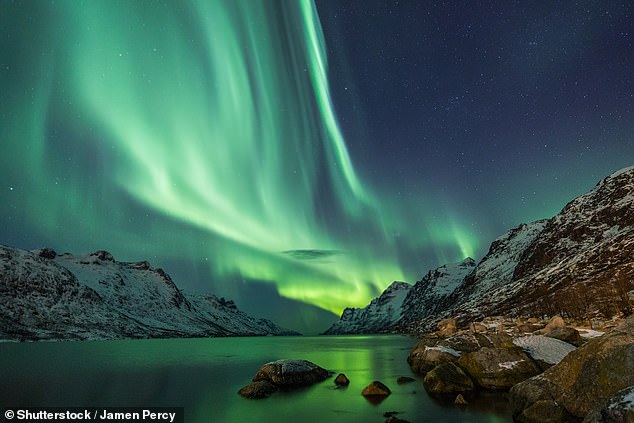 The Northern Lights are an Aurora, caused by charged particles from solar winds flung from our star, colliding with the Earth’s magnetic field. Stock image

This flare may have produced a Coronal Mass Ejection (CME) but further analysis is required if this will effect Earth.

There are presently 8 analysed sunspot regions on the visible side of the Sun.

The most distinctive regions are a series of three sunspot regions in the southwest quadrant.

As well as this there are two large sunspot regions that have recently rotated onto the disc.

All other regions appear to be small and simple, with significant flare activity unlikely, but will continue to be monitored for development.

Solar Wind / Geomagnetic Activity: Solar winds have been elevated but steady throughout the past 24 hours.

The total magnetic field has been weak with the important north-south component also varying weakly.

Geomagnetic activity has been Quiet to Unsettled (Kp1-3).

Solar flares are different to CMEs, which were once thought to be initiated by solar flares. Both are types of solar storms.

NASA explains: ‘We typically see a solar flare by the photons (or light) it releases, at most every wavelength of the spectrum.

‘The primary ways we monitor flares are in x-rays and optical light. Flares are also sites where particles (electrons, protons, and heavier particles) are accelerated.

‘Flares are our solar system’s largest explosive events. They are seen as bright areas on the sun and they can last from minutes to hours.’

In the Earth’s north, the Northern Lights is officially known as the aurora borealis and in the south it is called the aurora australis.

The Northern Lights fascinated scientists and skygazers for centuries, but the science behind it has not always been well understood.

Earth has an invisible forcefield, the magnetosphere, that protects us from dangerous charged particles from the Sun, controlled by the magnetic field.

Science expert Marty Jopson explains: ‘Whilst it shelters us, it also creates one of the most impressive phenomena on Earth – the Northern Lights.’

‘When the deadly solar winds meet Earth’s magnetosphere, some of the charged particles get trapped, and are propelled down the Earth’s magnetic field lines straight towards the poles.

‘And when they reach Earth, they strike atoms and molecules in our atmosphere, releasing energy in the form of light.’

The problem is disruption to our magnetic field creates solar storms that can affect satellites in orbit, navigation systems, terrestrial power grids and data and communication networks.

‘Harmful space weather has affected Earth before, but as we become increasingly reliant on systems and technologies vulnerable to the Sun’s outbursts, future solar impacts could be even more disruptive,’ says the European Space Agency (ESA).