Two tradespeople ran to the rescue to help pull a sinking black Range Rover from the water over fears children were trapped inside.

The Ausgrid workers feared the worst when an SUV began to sink into the water at Rowland Reserve in Baywater on Sydney’s northern beaches.

‘The vehicle was almost completely submerged with water up to the windows,’ Michael Loomes told The Daily Telegraph.

‘We could see it was sinking fast and knew we had to do something.’

Mr Loomes had been standing close by with his colleague Daniel Van Der Kley. The pair had been waiting for a barge to pick them up and take them to Scotland Island.

Moments later, Mr Loomes said he heard screaming from nearby.

‘All of a sudden we heard screaming and cries for help from the next boat ramp and when we looked we saw a four-wheel drive sliding backwards into the river where two men were launching a boat.’

The pair of electricians immediately ran to the men’s aid and offered to use their vehicle to winch the sinking SUV out of the water.

Dashcam footage showed the owner of the 4WD stripped down to his underwear as he worked with his friend in the water to attach the rope.

The two men work frantically to secure the vehicle as it continues to sink into the reserve.

Finally the rope is attached and the Ausgrid workers pull in the vehicle.

Ausgrid’s Chief Customer Officer Rob Amphlett Lewis heaped praise on the good Samaritans and said it was another example of its workers going above and beyond to help the community. 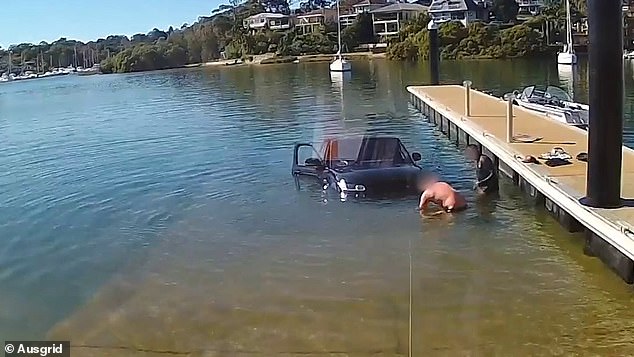