Former Australian star Greg Ritchie has lampooned Pat Cummins as he called out the ’embarrassing’ Australian Cricketers’ Association after it emerged ex-players will only be offered a miserly $30 food and drink voucher at the Sydney Test in January.

Ritchie – who played 30 tests for his country – was stunned to hear if he attends the Australia v South Africa match on day two at the SCG hospitality options will be scarce to say the least.

Throw in a few beers – which retail for a minimum of $9.30 each – and the ex-Queensland batsman affectionately known as ‘Fat Cat’ will soon be out of pocket.

‘Maybe I could ask the chef if he could cut a hamburger in half so I don’t spend all my voucher at once,’ he told the Daily Telegraph. 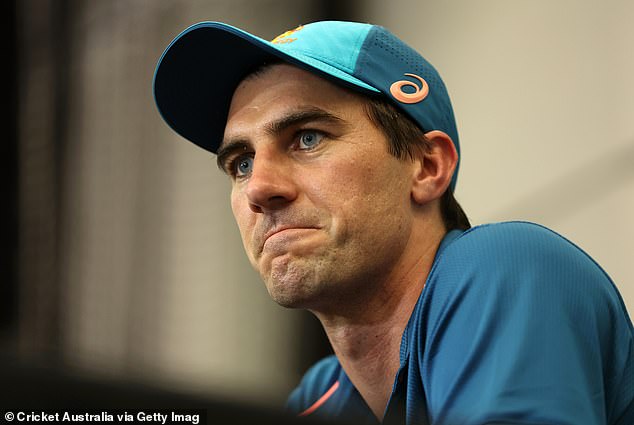 Ritchie also had a swipe at test skipper and climate crusader Pat Cummins, who has made his thoughts on the divisive topic well known

‘I wonder if I could buy eight chicken nuggets and eat four in the first session and then eat the other four after the tea interval?

Ritchie went on to fire a salvo at current skipper Pat Cummins, who recently confirmed he will not appear in any advertisements for Cricket Australia sponsor Alinta Energy this summer.

‘I’m just glad they have given us plenty of notice for this wonderful get-together because it would enable me to hire my electric bike and ride to Sydney so I’m carbon-neutral in line with the Australian captain’s theme,’ Brisbane-based Ritchie said.

Cummins’ stance on action against climate change has been a major talking point, and he has also publicly asked how cricket can better manage its carbon footprint.

‘It has always been a balance,’ he said when asked about his sponsorship stance.

‘We have seen certain players make decisions based on religions, or certain foods they eat, where they won’t partner with specific partners.

It comes despite climate crusader Cummins been seen driving a Range Rover SUV, regarded as one of the world’s worst vehicles when it comes to pollution.