Aussie shopper sums up his experience in popular stores like Cotton On, Myer and Kookai in brutally honest video: ‘Change my mind I dare you’

An Aussie shopper has poked fun at the different levels of service he believes is on offer at common retailers – which range from too much attention to ‘judgey and basic’.

Speaking to his 189,000 Instagram fans, Teddy who is known as Tedsthetics, unleashed on the popular retailers including Rebel and Tarocash.

He also dared anyone watching to ‘change his mind’.

The first shop in his line of fire was Rebel.

‘At Rebel sport it is either 20 people ask if you need help or there is no one around.’

Tarocash was the next in the spotlight.

Whether you are single or in a relationship the staff here will flirt with you until they sell you the whole store,’ he said.

He then ripped into Culture Kings: ‘Am I clubbing or am I shopping. This is the only place in Australia where they are playing rack rack city at 10.30am.

‘Bro I am trying to buy some shoes not bust a move.’

He then shared a picture of Kookai.

‘I am convinced the staff here get paid bonuses to make you feel as uncomfortable as possible in their store,’ he said.

He then moved on to Myer.

‘Staff, what staff?’ He said, before repeating the joke for David Jones.

Next was Cotton On which he approached with a bored tone. 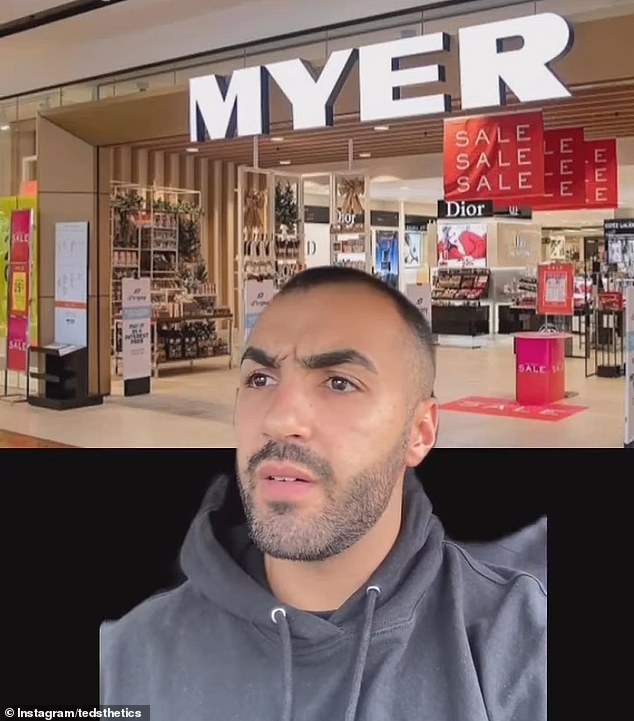 He finished by talking about the staff at Zara.

‘They serve you like you just stepped on their pet before you approached them for help,’ he said.

And people were quick to agree with him – with the top three comments laughing at Kookai, Zara and Cotton On.

‘That’s me. I work at Cotton On,’ one woman laughed.

‘I’ve worked at Zara and have seen coworkers gradually turn into fake snooty people because for some reason they think working at Zara is like working at Chanel. Bruh. It’s just a place full of designer knockoffs tagged at a high price so people feel like they’re buying lux sh*t,’ one woman said.

While another swore she was approached and asked if she wants a job when she was shopping at Myer because ‘they are so understaffed’.

‘Try working at Myer! It’s bad enough when you can’t find anyone as a customer but when you’re a staff member and have to run around like a headless chook just to get some help or find a manager?! Even worse,’ one woman said.

‘Omg Kookai, I will not go in there,’ said another woman.

And some women were interested to learn about the service at Tarocash.

‘Omg no wonder my husband spent a fortune at Tarocash. He’s in trouble,’ one said.

Some added stores of their own to the list.

‘You forgot how bad Bunnings is. The staff are either hiding or the one person that can be found had their own personal queue,’ one woman said.

‘And don’t even get started on the General Pants stores… ‘are you right for sizes champ?’ 4 seconds after you lock the change room door… ‘how you going for sizes man?’,’ another said.