Startling figures reveal Australians are spending more on poker machines now than before the coronavirus pandemic.

Liquor and Gaming NSW data shows punters lost more than $571 million in July, up from $530 million in June, 2019, despite every second machine being switched off due to COVID-19 social distancing restrictions.

New figures show Australians lost more than $571 million on poker machines in June, compared to less than $530 million in June of 2019 despite half the machines being available due to COVID-19 restrictions (man pictured on a poker machine)

Professor Gainsbury said punters, including problem gamblers, rushed back to licensed venues after they reopened at a limited capacity on June 1.

‘We did have people saying: “Great, I have it under control, I don’t need to come to treatment” only, when venues ­reopened, they reverted back to gambling, potentially in a higher way,’ she said.

Professor Gainsbury told Daily Mail Australia many people were using poker machines as a way to cope with the stress of the pandemic.

‘It is important that venues and staff pay close attention to customers and look for indicators of risk and have conversations to check in regularly,’ she said.

‘Efforts for social distancing need to be balanced with obligations to ensure customers are gambling at affordable levels.’

Licensed venues in NSW were the first in Australia to switch their poker machines back on after the coronavirus shutdown.

From March 23 to June 1 NSW clubs suffered an 87 per cent decline in monthly revenue, equating to a collective net loss of $212 million each month.

‘It was almost as if there was this pent-up desire to ­gamble,’ he said. 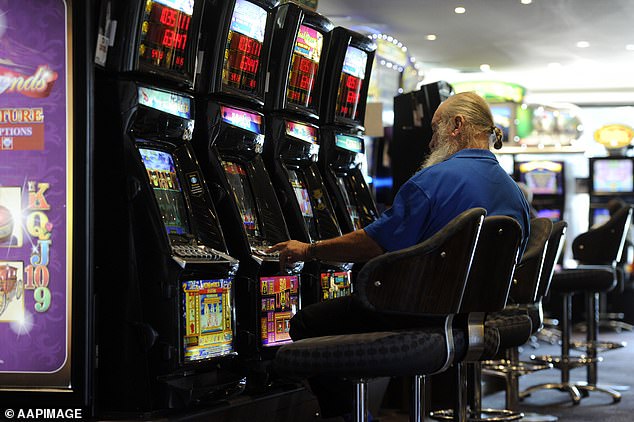 Experts said a combination of boredom, anxiety and government handouts like JobSeeker and JobKeeper all contributed to the sharp rise in poker machine spending (a man pictured on a poker machine)