There has never been anything like this. Not even Ian Botham here in 1981 and not even the ‘greatest Test’ at Edgbaston in 2005. This was the miracle of Headingley, the sequel.

What happened in the Leeds sunshine at this famous old ground on Sunday was barely credible drama on a scale that no other cricketing format can muster.

There was a missed run-out, a dropped catch and the critical waste of a decision review saw Australia somehow snatch defeat from the jaws of victory in the third Ashes test.

Australia was left to rue some stunning late mistakes that allowed Stokes and stonewalling No.11 Jack Leach to take the hosts from 9-286 to the victory target of 359. 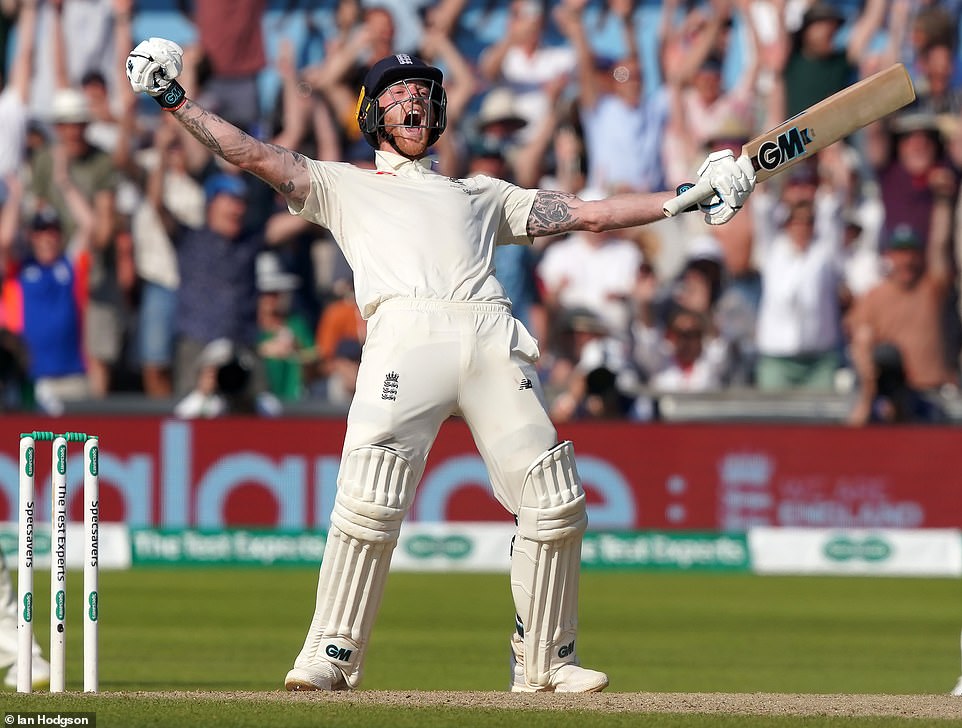 Ben Stokes staged a superb last stand for England, hitting a number of sensational sixes to help them win the third Ashes test

England’s Ben Stokes’ innings will long live in English cricket folklore, playing a remarkable lone hand with 135 not out – including eight sixes – to lead the hosts to a one-wicket win on Sunday that squared the series at 1-1.

Michael Vaughan even noted that commentator Geoffrey Boycott was jumping around in celebration.

‘When Geoffrey Boycott says it’s the Greatest Test innings he has seen in 60 yrs watching the game you know it’s the GREATEST Ben Stokes,’ he tweeted.

Stokes chanced his arm and was almost caught out on the boundary several times but the best opportunity to dismiss him came when an onrushing Marcus Harris got his hand to the catch opportunity but the ball spilt out as his body hit the ground.

Australia’s best opportunities came with the final two balls of the penultimate over.

The bespectacled Jack Leach, every inch the new bank clerk who went to war, walked out to join Stokes with 73 needed and this third Test looking all over bar considerable Australian shouting. What followed was truly remarkable. 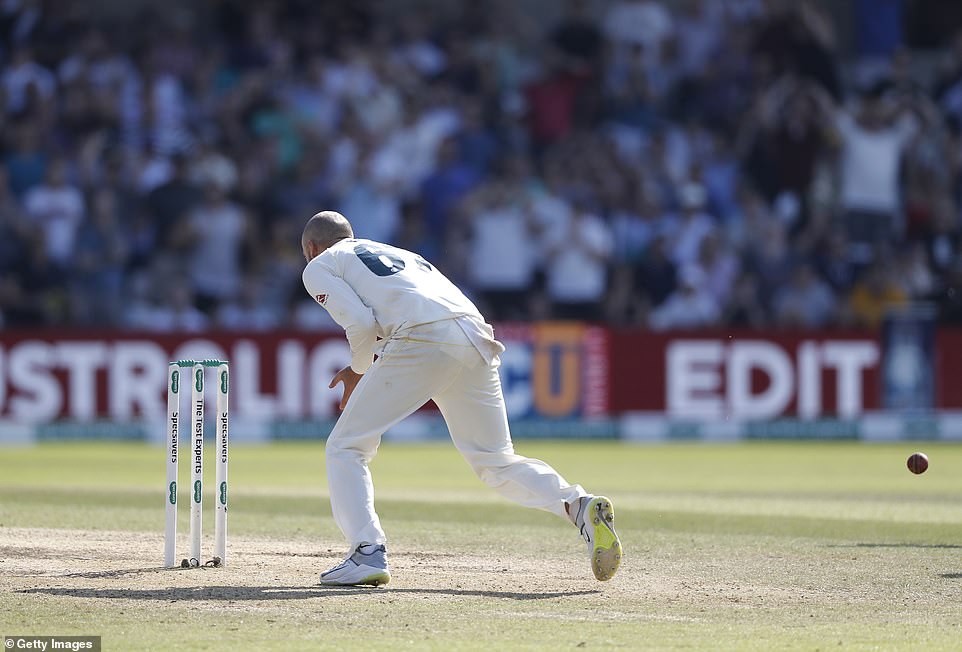 The throw went to Lyon next to the stumps with Leach a long way out of his ground, but Lyon fumbled it and the English tailender got back into his crease 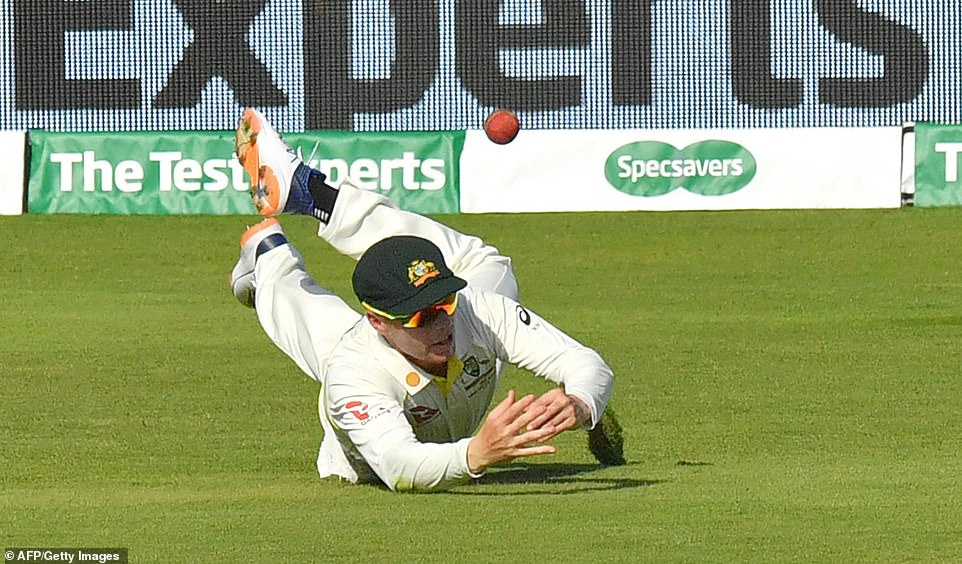 The throw went to Lyon next to the stumps with Leach a long way out of his ground, but Lyon fumbled it and the English tailender got back into his crease.

The next ball, Stokes went for a sweep but missed and the ball hit both pads, with the replays showing it was going on to hit the stumps. Lyon implored umpire Joel Wilson, who shook his head, and there was no opportunity for a review as Australia had wasted it the previous over on an lbw decision that was never going to succeed.

Significantly and brilliantly, there was no celebration or even acknowledgement when Stokes reached 50 or even three figures even though the Western Terrace was going wild. Just a realisation that his job was not yet done.

Australia began to wilt under extreme pressure as Stokes somehow kept his cool. First Marcus Harris dropped a difficult chance running in from third man with 17 needed. Then his side began to implode. 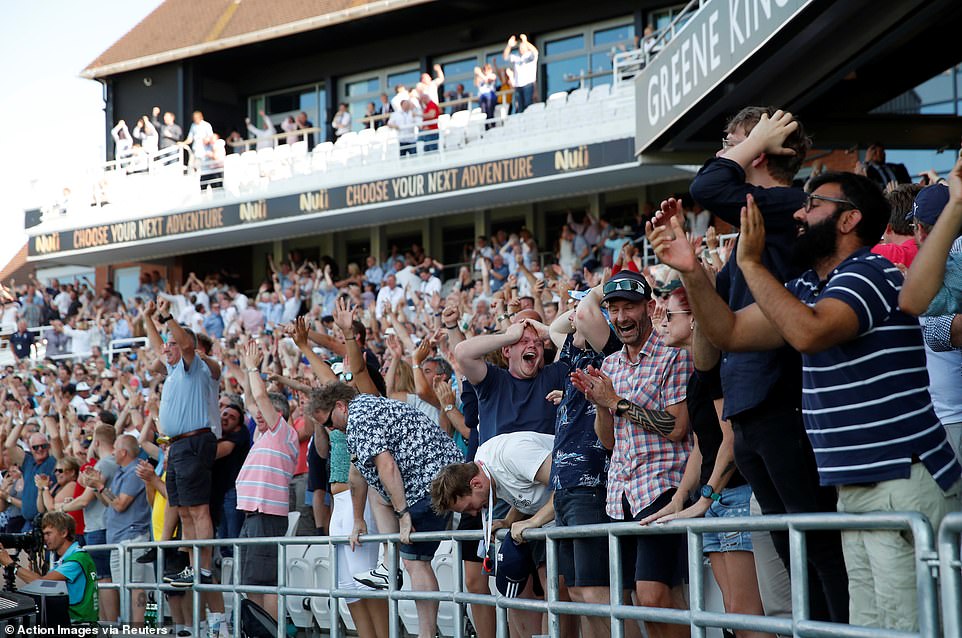 Bedlam: England fans can barely believe their eyes after watching Ben Stokes lead his team to one of their greatest ever Ashes victories, scoring 135 not out and sharing a 76 stand for the final wicket with Jack Leach 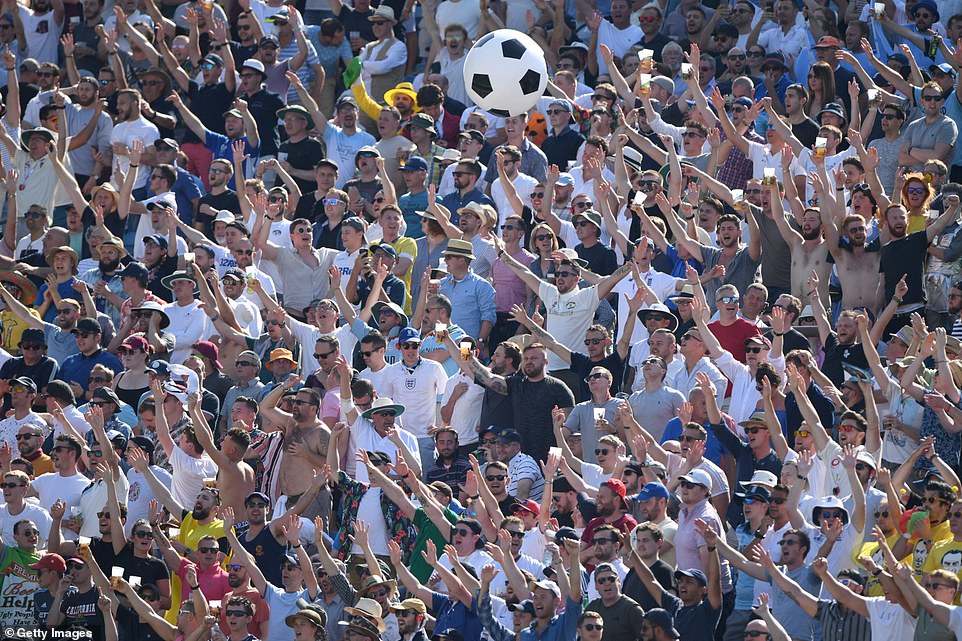 Raucous crowd: Spectators at Headingley enjoy the thrilling final day of the third Ashes test where England chased down 359, their highest successful run-chase of all time, to level the series 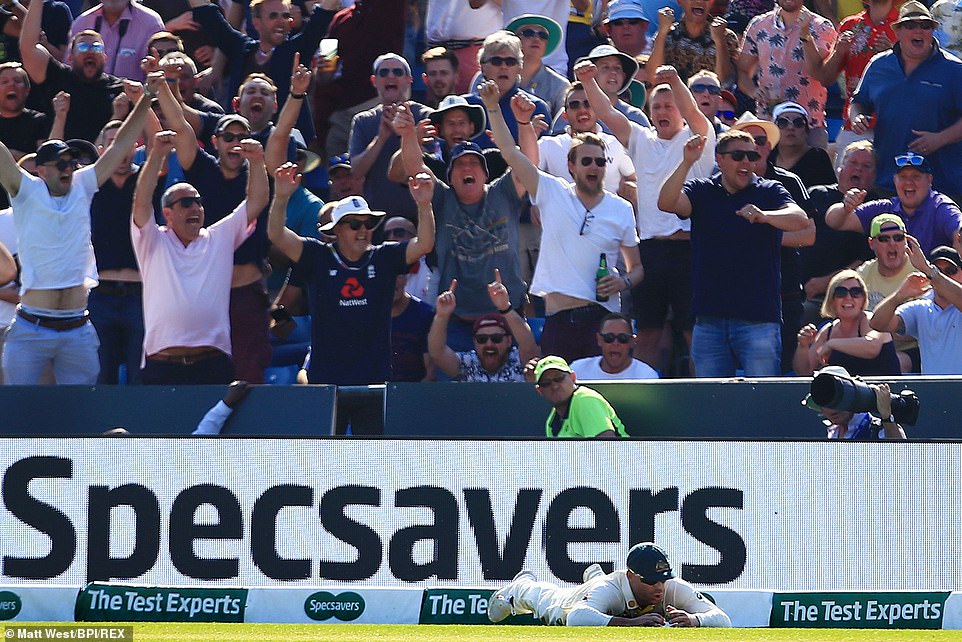 Australia’s misery was complete when, with the scores level, Stokes slashed Cummins through the off-side for four and let out a huge warrior-like roar of triumph before he was joined in celebration by his unlikely partner in Leach.

‘Cricket is a game of inches and we had a few opportunities. Not the end of the world – one game of cricket and we’ve still got some opportunities to come back in the series.’

World Cup hero Stokes delivered another pressure-laden knock for the ages, finishing 135 not out on Sunday as England completed their highest fourth-inning chase in Test history. 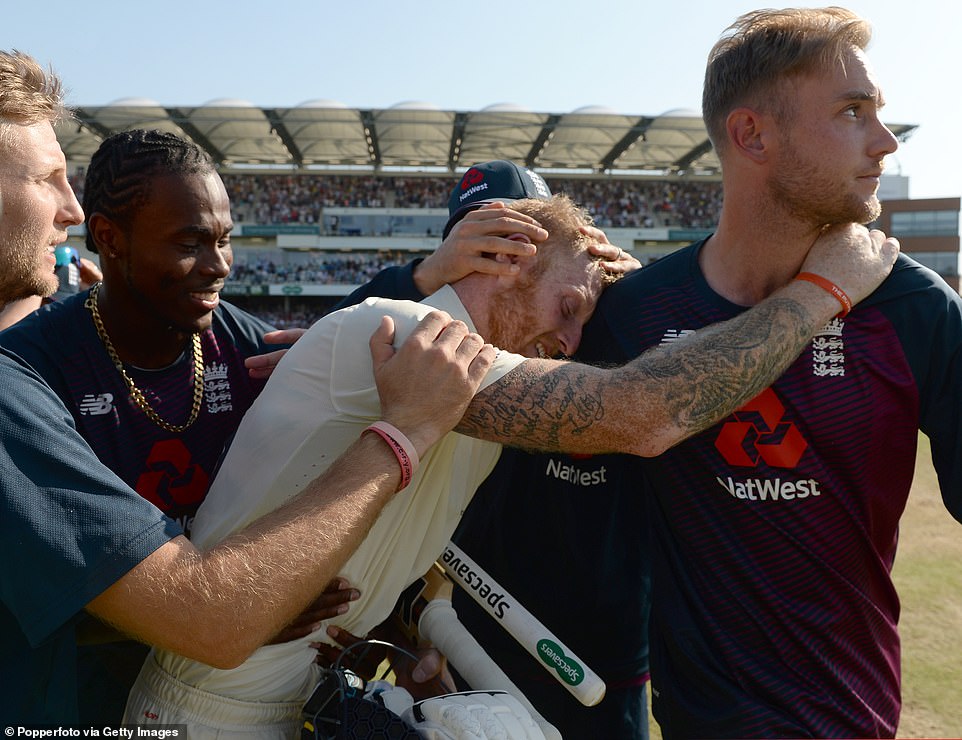 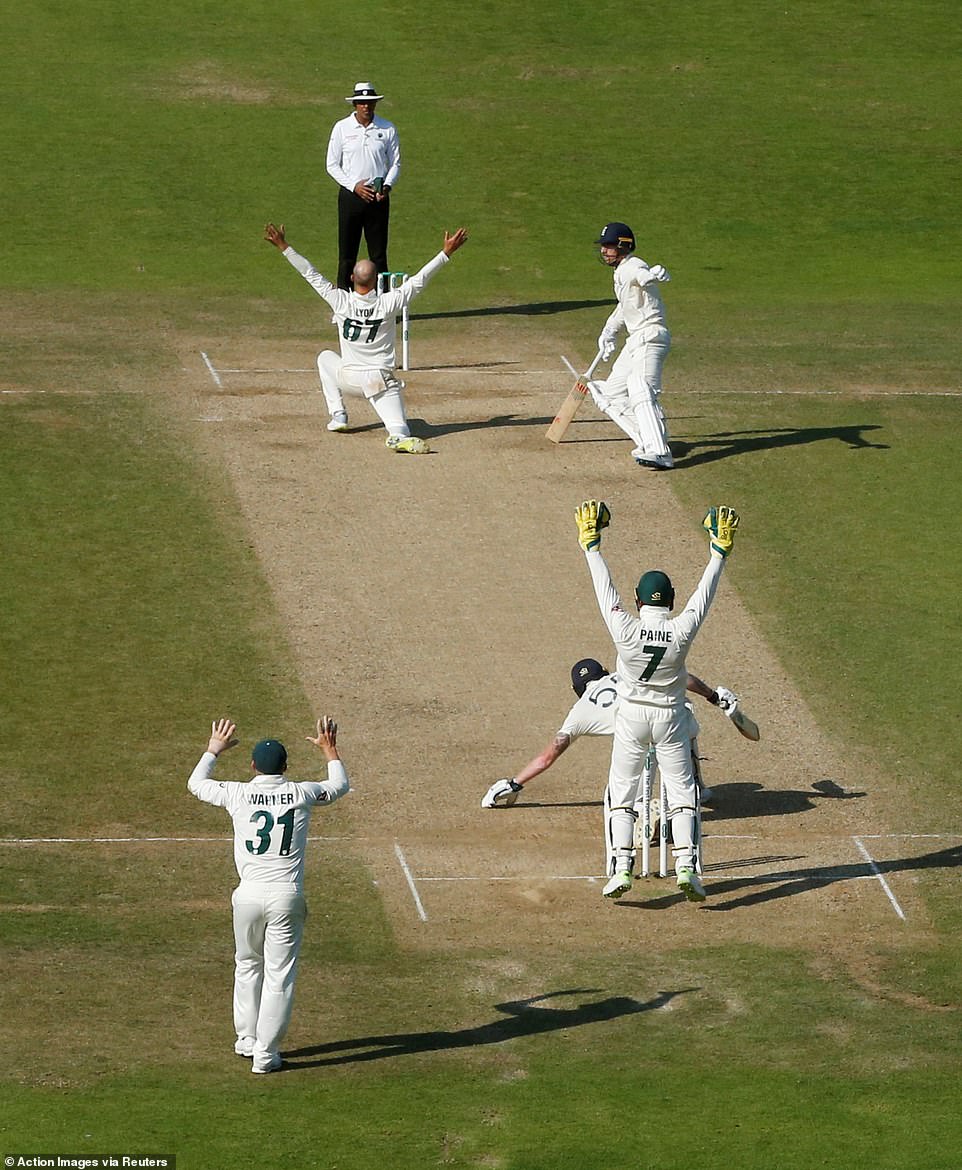 Stokes went for a sweep but missed and the ball hit both pads, with the replays showing it was going on to hit the stumps. Lyon implored umpire Joel Wilson, who shook his head, and there was no opportunity for a review as Australia had wasted it the previous over on an lbw decision that was never going to succeed

The hosts, skittled for 67 in their first dig, required 73 runs from their final-wicket stand to make history after Jofra Archer and Stuart Broad departed in quick fashion during the post-lunch session on a topsy-turvy fourth day at Headingley.

‘I have to take it all in. I’m not sure that will ever happen again.’

Stokes hogged strike and went on a six-hitting rampage, only to twice go close to handing Australia a one-run victory in Nathan Lyon’s final over of the drama-laden contest.

After the missed run-out and lbw opportunities, Leach clipped a ball off his hips to level the scores then Stokes cracked Cummins’ next ball through the covers for four to level the series, triggering wild scenes from the delirious allrounder, crowd and dressing room. 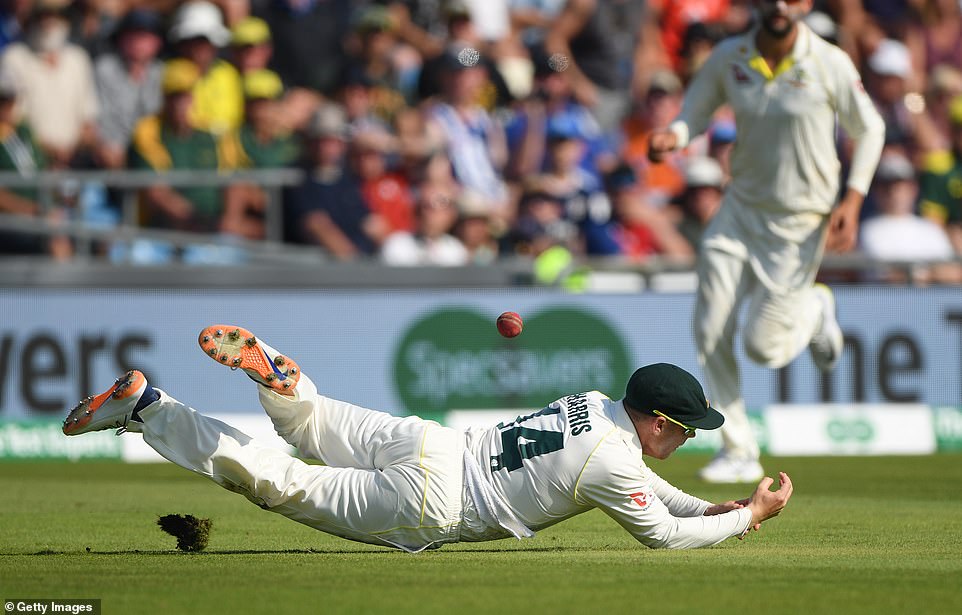 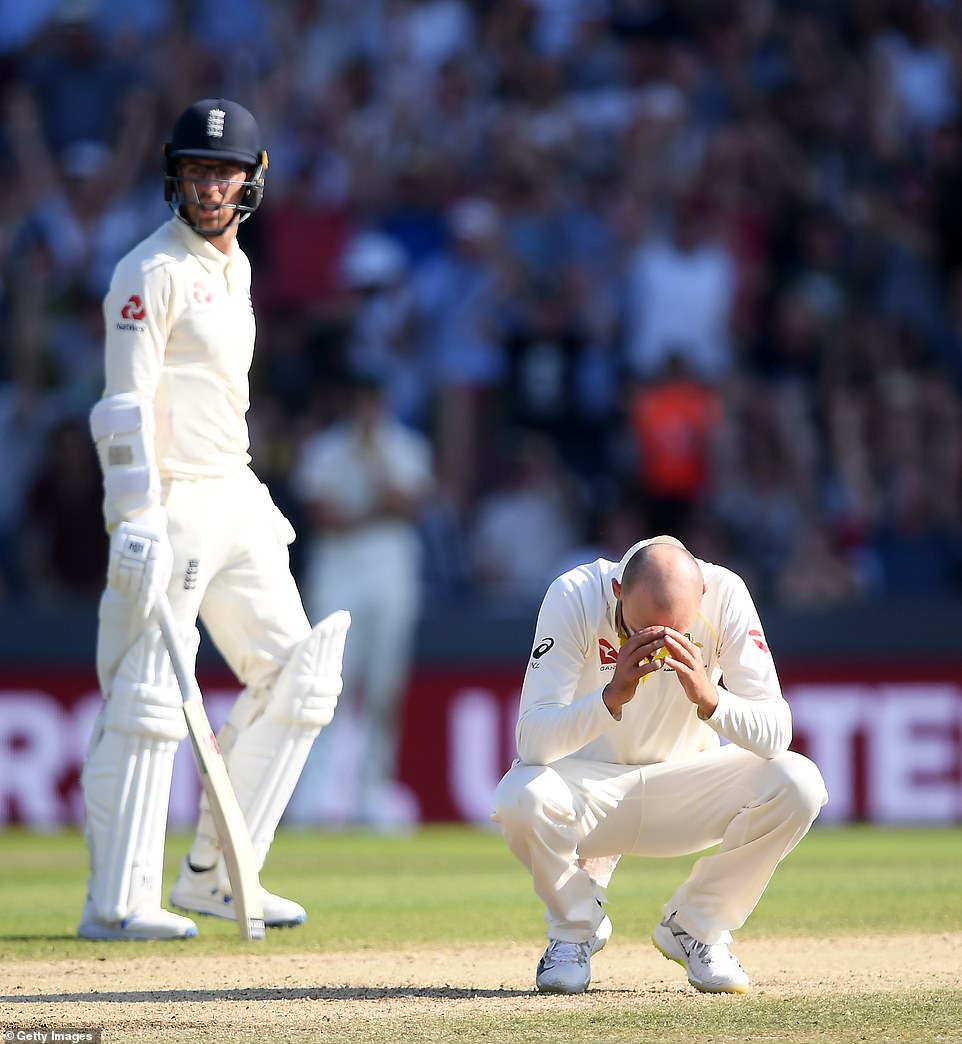 Lyon reacts after an appeal for LBW against Ben Stokes of England is given not out. If Australia hadn’t have burned a review the previous over – the decision would have been overturned

‘Stokesy played out of his skin, had some luck, but played very well.’

Victory for England, who had never hauled in a target higher than 332 to win a Test, was remarkable on several fronts.

Only one team had previously chased down more than 342 to win a Test in England, which coincidentally came at Headingley. 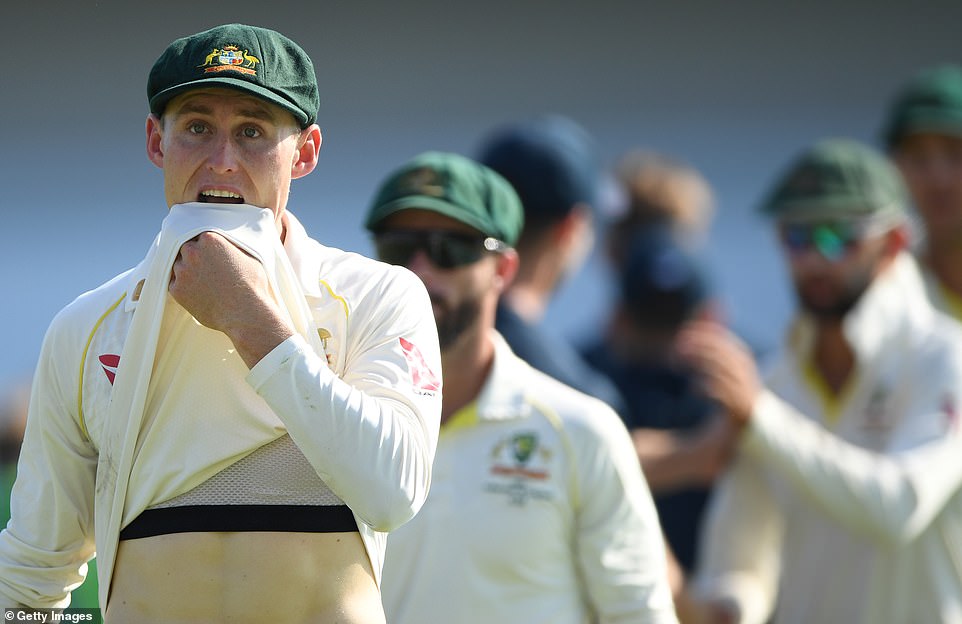 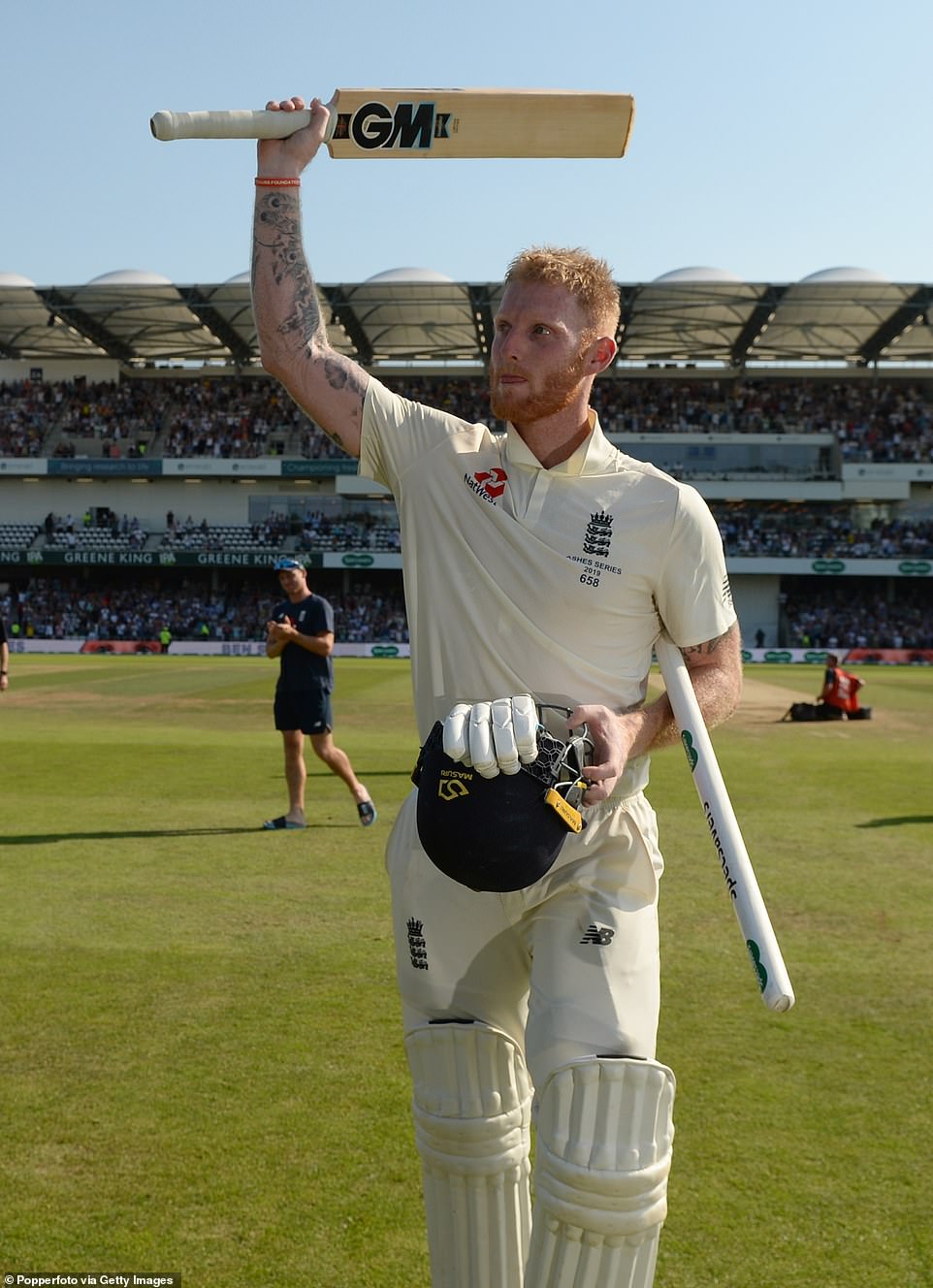 World Cup hero Stokes delivered another pressure-laden knock for the ages, finishing 135 not out on Sunday as England completed their highest fourth-inning chase in Test history

That was Don Bradman’s 1948 Ashes tourists, who sealed their invincible reputation by made a mockery of chasing 404 thanks to the captain’s unbeaten 173.

The result is a hammer blow to Australia’s confidence given pundits were calling for Joe Root to step down as captain after England’s shambolic collapse on day two.

Lyon needed just three deliveries on day four to claim the key scalp of Root then the tourists fluffed their lines with the second new ball.

Hazlewood, who finished with match figures of 9-115, shifted momentum by snapping an 86-run stand between Stokes and Jonny Bairstow.

Travis Head ran Jos Buttler out with a superb direct hit in a post-lunch collapse of 5-41 but Stokes always loomed as a potential match-winner.

Ben Stokes and England wrote another chapter in Headingley’s remarkable Test history as they chased down 359 to beat Australia and level the Ashes.

From Bradman to Botham and beyond, here’s a look at some of the most memorable matches at the Yorkshire venue.

England’s successful chase on Sunday was the 10th-highest in the fourth innings of a Test – but not a Headingley record.

The great Sir Don Bradman made 173 not out and put on 301 with opener Arthur Morris, who top-scored with 182, as the tourists completed what at the time was a record chase – and remains fourth in the all-time list – with seven wickets to spare.

The match aggregate of 1,723 runs was the sixth-highest of all time – four of the five above it were draws, with the top two being ‘timeless Tests’ featuring nine and seven days’ play respectively.

OTDIH: 1981: England won a third Ashes Test by 18 runs at Headingley. Ian Botham took six wickets in Australia’s first innings and made an unbeaten 149 in England’s second (following on) before the tourists were dismissed for 111. The hosts went on to win ‘Botham’s Ashes’ 3-1. pic.twitter.com/tDHC0y7ZWn

Following on 227 behind, England slumped to 41 for four and 105 for five before Botham, who had taken six for 95 in Australia’s first innings, strode to the wicket.

Australia still needed only 130 to win but Bob Willis took eight for 43 to bowl them out for 111 and England went on to win the series 3-1, Botham taking five for 11 at Edgbaston and 10 wickets in the dead rubber at The Oval as well as scoring 118 at Old Trafford. 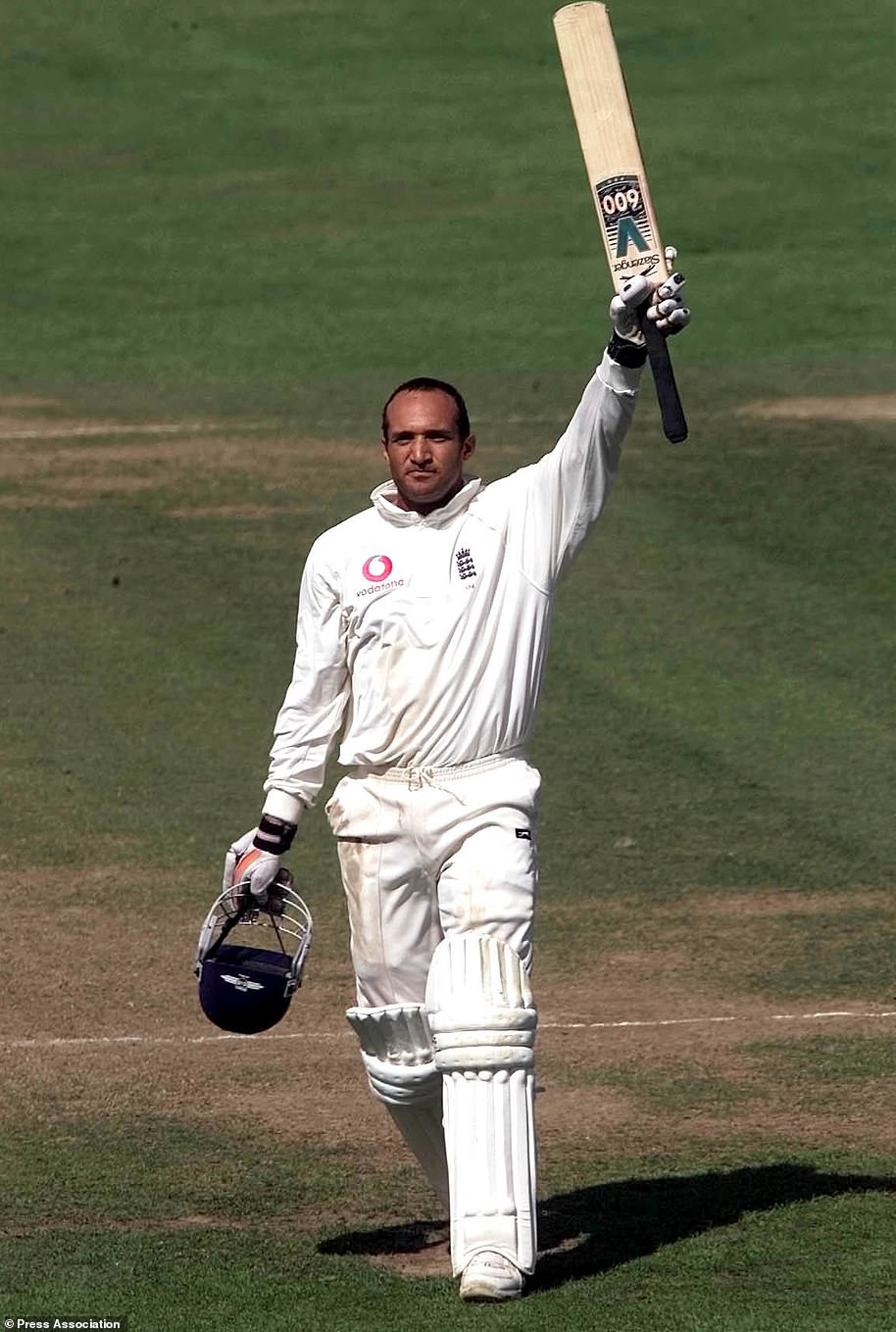 Mark Butcher’s finest hour in an England shirt punished an aggressive Australian declaration at 176 for four as the hosts chased down 315 for the loss of four wickets.

The Surrey left-hander stroked a Test-best 173 not out and was backed up by captain Nasser Hussain’s half-century as England bounced back from a first-innings deficit of 138, brought about by Glenn McGrath’s seven for 76.

It would prove only a consolation win, however, in an otherwise one-sided 4-1 series win for the Baggy Green. 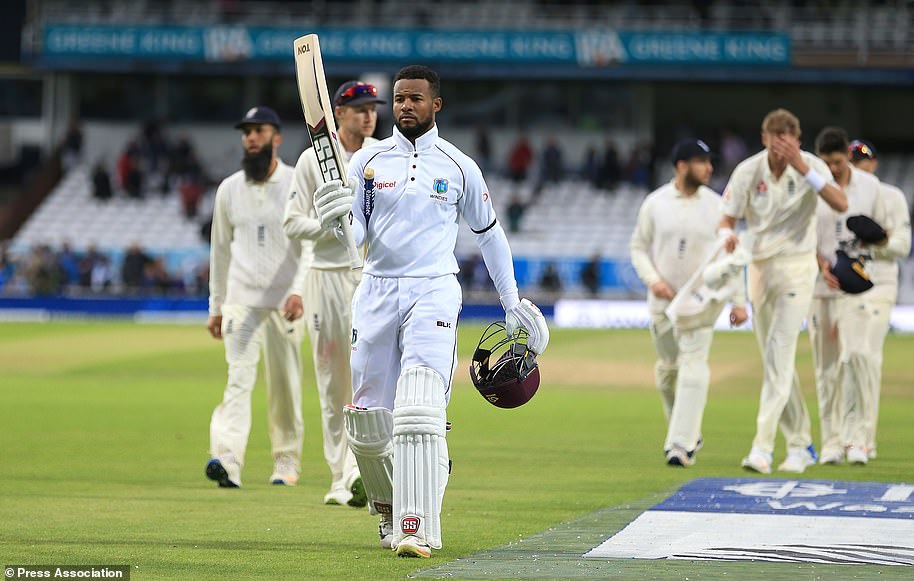 Leeds has hosted four of the top 30 chases in Test history – twice as many as any other ground – after Kraigg Brathwaite and Shai Hope starred for the Windies.

England’s 490 for eight declared left the tourists chasing 322 but, having both made first-innings hundreds, opener Brathwaite laid the platform with 95 and Hope, with 118 not out, saw the job through in fading light with the help of Jermaine Blackwood’s hard-hitting 41.

England won the series decider at Lord’s a fortnight later but Hope, who averaged 19 before the Test, went on to establish himself as a top-order mainstay for his country while Brathwaite was hastily drafted in to close out the season at Headingley as Yorkshire’s overseas player. 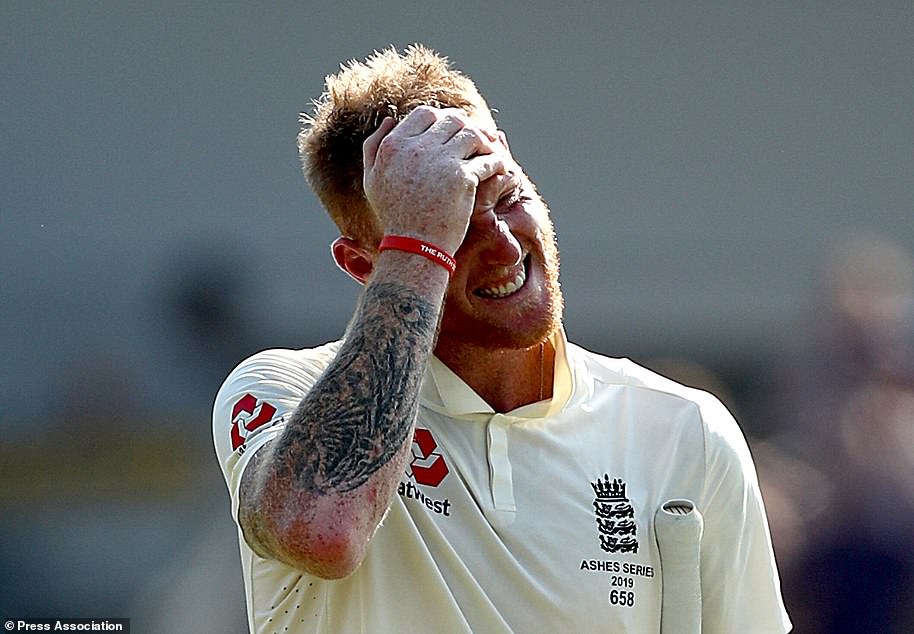 Two fearsome bowling attacks and two fragile batting line-ups saw Australia bowled out on day one for 179 before England crumbled to 67 all out in reply.

Marnus Labuschagne added 80 to his first-innings 74 to seemingly put the tourists in command as they set England 359 to win and keep the Ashes alive.

Joe Root and Joe Denly’s dogged half-centuries and partnership of 126 raised hope but as in the World Cup final just over a month previously, it was Stokes who produced an innings of astonishing nerve to win the match. Having made two from his first 50 balls, he finished with 11 fours and eight sixes in his 135 not out.