Australia’s women have followed in the footsteps of the great Oarsome Foursome to win gold in the coxless four at the Olympic Games.

The quad of Rosemary Popa, Lucy Stephan, Annabelle McIntyre and Jessica Morrison were strong favourites for the event, making it the first gold Australia have recorded so far out of the pool.

The Dutch team mounted a monumentous comeback in the final stages but it wasn’t enough to topple the Australians who led from start to finish in a commanding performance.

It’s also the first time the country’s women have won the event and 30 years after the event was axed altogether for women.

The girls continue Australia’s female domination at the Tokyo Games, with only the girls having brought home gold so far. 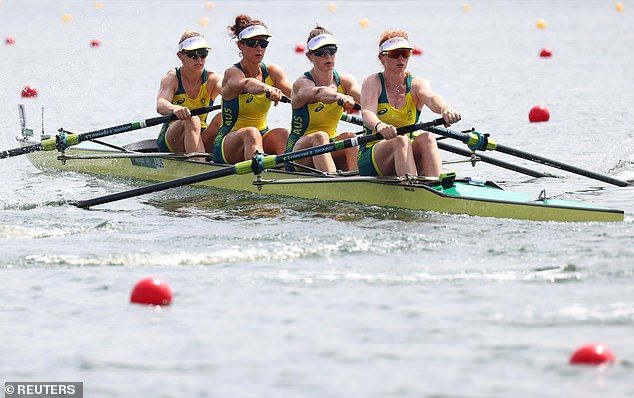 The quad of Rosemary Popa, Lucy Stephan, Annabelle McIntyre and Jessica Morrison made it the first gold Australia have recorded so far out of the pool

They were a boat length ahead after the first 1,000 metres, but the Dutch team mounted a strong comeback and halved the gap with 500m to go.

‘They’re incredibly fast. I never went that quick as a lightweight guy,’ he said of his team.

The team is made up of two Rio Olympic veterans, Popa and Stephan, with the two rookies McIntyre and Morrison.

The combination has proved a hugely successful one for the Australian team, who stormed home to claim the country’s first non-swimming gold medal and first female rowing medal.

The group won two gold medals at the 1992 and 1996 Olympic Games, cementing themselves as heroes to the Australian public.

Their inclusion in the event was a bittersweet one for coach Keogh, who saw Australia’s lightweight men’s four team, the event he rowed for the country in, left out of the Games.

The International Olympic Committe have been attempting to reduce the number of Olympians at the competition, with 263 rowers allowed altogether and an even share of male and female competitors.

The win is sure to ease the pain however, as Keogh has now led his young women to gold medal glory.