Australia shuts off New Zealand: Four states close their borders amid concerning Covid cluster across the ditch – here’s what it means for YOUR overseas holidays

By Charlie Coë and Lanie Tindale For Daily Mail Australia

Four Australian states have shut their borders with New Zealand after a spike in coronavirus transmission in Auckland.

Queensland, Victoria and New South Wales have already ended quarantine-free travel for travellers from New Zealand after a cluster of Covid-19 infections linked to an Auckland high school grew by three cases.

Tasmania on Wednesday night announced it would only welcome travellers who had been in the Auckland region in the past two weeks if they had an essential reason to travel to the state.

Tasmania, Queensland, Victoria and New South Wales have all imposed restrictions on travellers from New Zealand after a Covid-19 outbreak in Auckland. Pictured: NZ travellers arrive in Brisbane on Jan 7, 2021

‘Public Health Services is contacting people who have been in New Zealand in the past 14 days and have recently arrived in Tasmania to ensure they have not been in one of the newly declared hot spots in New Zealand,’ Tasmanian Director of Public Health Dr Mark Veitch said.

Queensland was the first of the states to end quarantine-free travel for trans-Tasman travellers and re-impose mandatory hotel quarantine.

Authorities in the Sunshine State are also asking all travellers who have been in New Zealand since February 21 to get tested and isolate until they get their results. 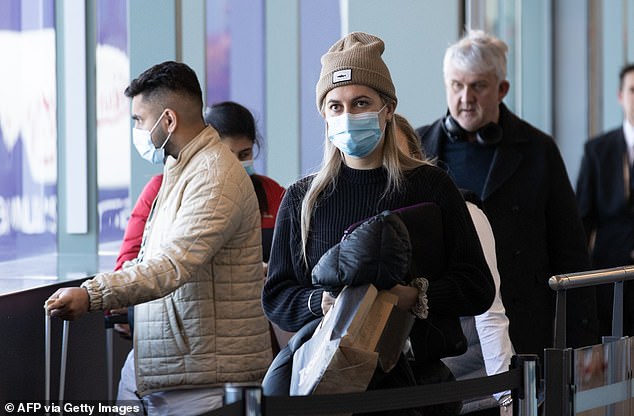 Domestic travellers wear face masks as they arrive at New Zealand’s Wellington International Airport on August 12. Only trans-Tasman travellers with an essential reason can enter Tasmania

This also applies to anyone who has entered from February 6 who has not already had a test after entering Queensland.

Victoria meanwhile said from Wednesday night all travellers from New Zealand would have to undergo 14 days of hotel quarantine.

‘All flights arriving from Auckland into Victoria will be regarded as “red zone” arrivals and anyone arriving will be required to enter mandatory hotel quarantine for 14 days,’ the Victorian Department of Health said.

New Zealanders travelling to NSW will also have to go into hotel quarantine.

NSW health officials are contacting anyone in the state who has been in New Zealand since February 20 to ensure they haven’t been to any of the Auckland venues exposed to the virus.

Thousands of New Zealanders were forced into quarantine after two new cases of coronavirus were diagnosed on Tuesday night, all linked to a cluster based around Papatoetoe High School.

The two new cases were siblings of a high school student who tested positive on Tuesday, with one a teenage worker at a Kmart n Auckland’s east.

The students have tested positive with the highly infectious ‘mutant’ UK strain of the virus.

‘She was doing things like folding clothes, doing a bit of the click-and-collect work,’ the prime minister said.

‘She wasn’t a cashier, but we are being very cautious.’

More than 600 people were tested at Papatoetoe High School on Tuesday. 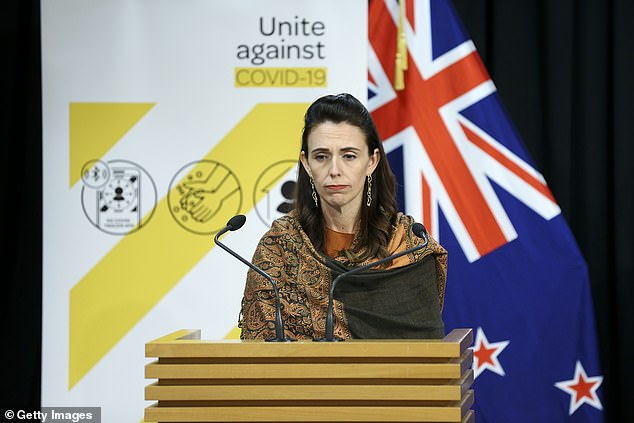 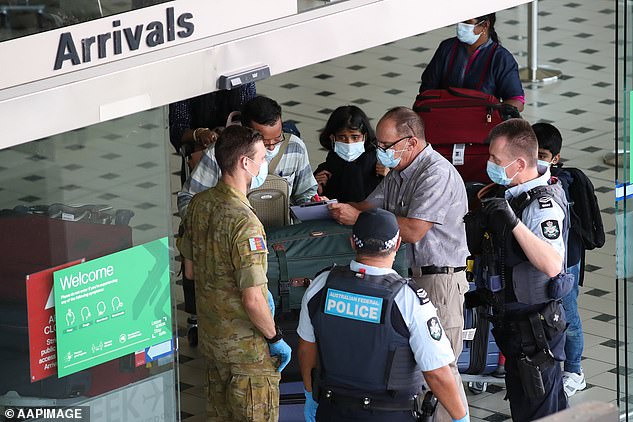 New Zealand passengers arrive at Brisbane and are quarantined on Dec 16, 2020

At the same time, New South Premier Gladys Berejiklian has called for Ms Ardern to open a trans-tasman bubble with Australia and let Aussies enter her country.

‘I’ve always been robust and confident about our ability to have a transtasman bubble. I hope that happens sooner rather than later. There’s no reason why it can’t.’