Residents in towns across NSW and Queensland have been evacuated amid flood warnings, with Australia’s east coast set to be pummeled with more rain.

The NSW State Emergency Service on Friday morning told residents of Boggabilla and Toomelah they must evacuate by 11am or risk being stranded without help.

‘Once floodwater enters the area road access will be cut and all sewerage and power will be lost,’ the evacuation order warns.

Residents of Boggabilla and Toomelah were told they must evacuate by 11am Friday or risk being stranded (pictured, a resident cleans up after flood waters ravage a business in Inglewood, Queensland)

‘If you remain in the area after 11am, you will be trapped and it may be too dangerous for SES to rescue you.’

An evacuation centre has been set up at Moree East Public School offering a bus service for fleeing residents.

The Macintrye River has already reached moderate flood levels in Boggabilla, but is expected to peak with major flooding. 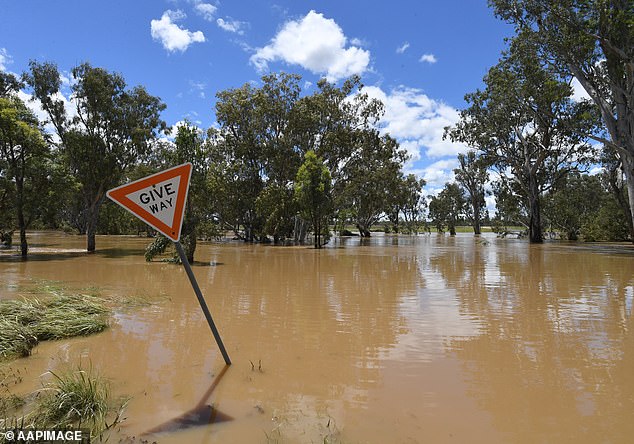 Over 30 flood warnings have been issued across NSW and QLD (pictured, flood waters from the Macintyre Brook)

Major flooding is also occurring upstream in Goondiwindi, with the river likely to exceed the peak of the 2011 floods that devastated south east Queensland. 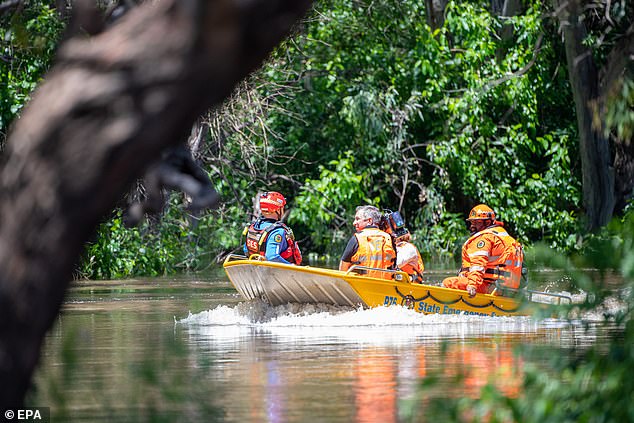 SES workers travel along the Lachlan River in Forbes, NSW

At least 81 aged care residents and hospital patients in Goondiwindi are likely to be airlifted to safety with floodwaters lapping just 40cm below the Queensland town’s levee bank.

The MacIntyre River is already at its highest level in 10 years at Goondiwindi on Friday with the Bureau of Meteorology forecasting a flood peak of 10.7m within the next 24-48 hours. 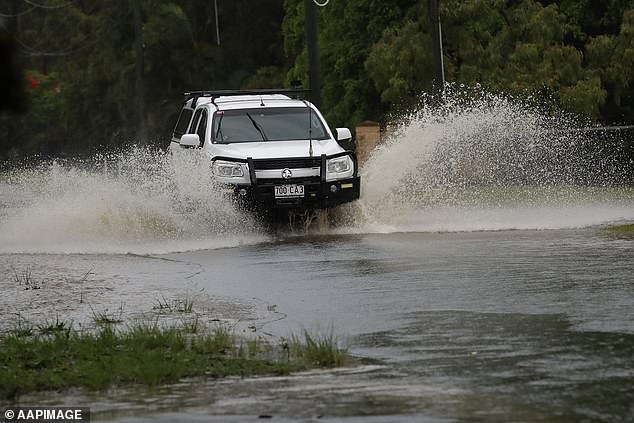 A brave driver ploughs through flood waters in Brisbane this week

Premier Annastacia Palaszczuk says the river is at 10.6m and rising and 81 people in aged care homes and the hospital will be airlifted out if the water gets any closer to the top of the 11m flood levee.

‘We’ll be monitoring that very closely, we’ll be getting another update from the bureau about the flood levels later on this afternoon,’ she told reporters on Friday.’

‘Now the people of Goondiwindi understand and they’ve been through floods before such as 2011, there are some higher grounds that people know where to evacuate to, and we are watching it very carefully and we are keeping the community and everyone updated.’ 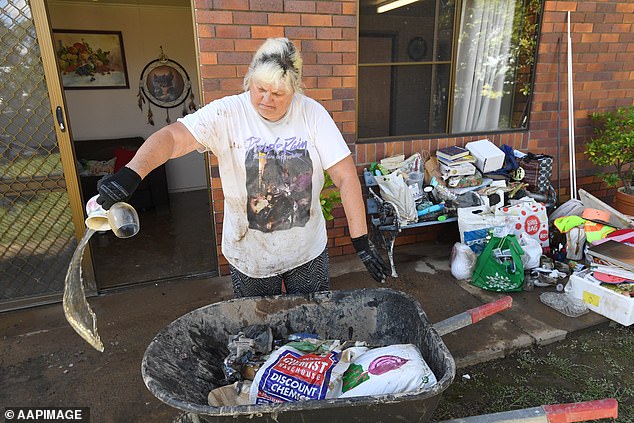 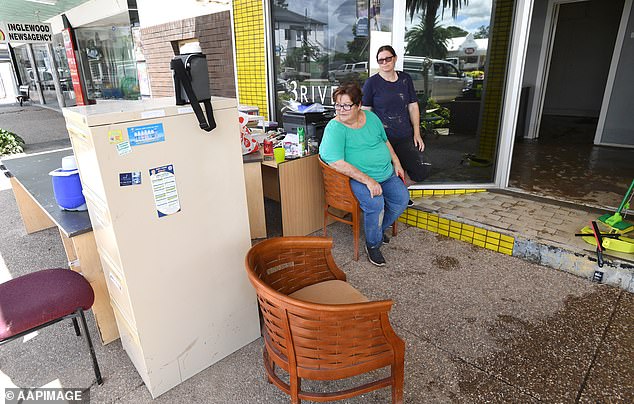 Police Commissioner Katrina Carroll said the airlift is likely to occur later on Friday with the patients to be flown to facilities in Toowoomba and Warwick.

She said State Emergency Services, police and Australian Defence Force personnel were on standby to help ahead of Saturday’s flood peak.

Temperatures in the region are expected to hit 34 degrees on Friday, but the Bureau of Meteorology has warned weather for the regions could be ‘hit or miss’.

Localised heavy rainfall is possible with thunderstorms over the weekend, which could lead to renewed river rises.

Brisbane and Sydney could see similar rainfall with 25-50mm expected mid and late next week.

Over 30 flood warnings are in place across Queensland and inland NSW. 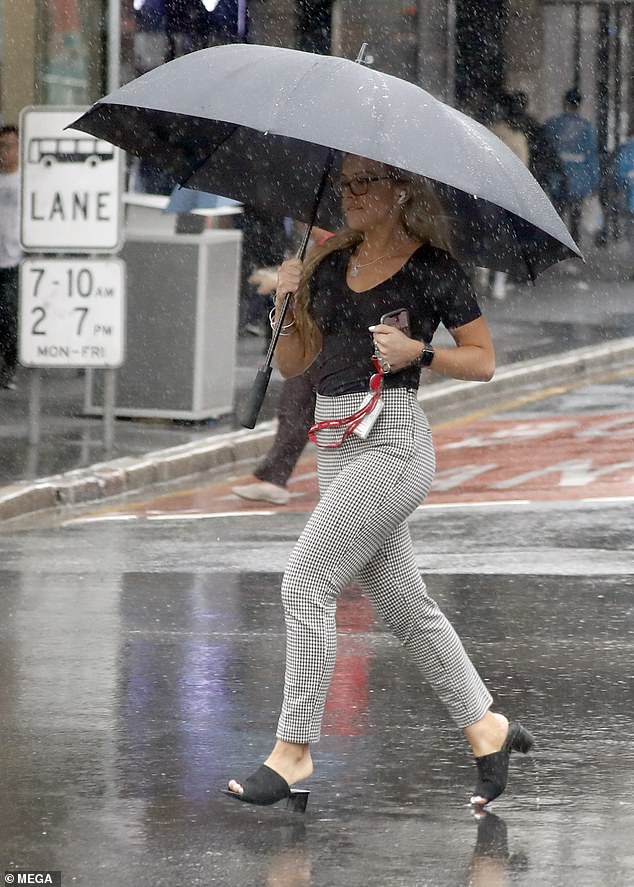 Brisbane and Sydney could see similar rainfall with 25-50mm expected mid and late next week (pictured, residents in Brisbane face another day of wet weather)

Major flooding is also underway at Wee Waa along the Namoi River, at Warren on the Macquarie River, and at Jemalong on the Lachlan River.

Sunny weather returned for a spell in some parts of the country, with multiple parts of NSW experiencing maximum temperatures that exceeded 30C on Friday. 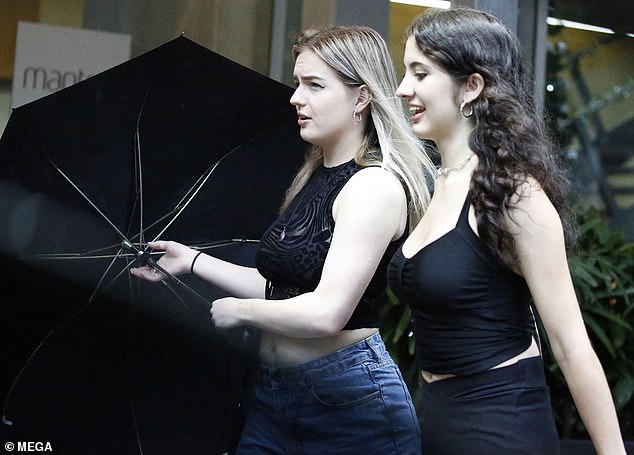 More rain and storms loom for NSW, QLD and eastern Victoria next week

However the prospect of more rain and storms is looming in, NSW, QLD and eastern Victoria next week.

BOM warned the weekend will be the most concerning, as a major peak moves through Saturday.

Wet humid conditions will continue over the eastern and a cold front will bring showers, winds – including snow down to 700m in parts of Tasmania.

This comes as Australia records its wettest November since 1900.

The current average rainfall record has surged to 72 millimetres – more than double the November national average of 32 millimetres.

Federal-state disaster assistance is available in 39 local government areas across NSW for individuals and councils to clean up damage from last month’s floods.