By Josh Hanrahan and Daniel Piotrowski for Daily Mail Australia

An Australian man charged with killing a grandfather when he threw a wine bottle off the balcony of a Singapore high-rise is facing 15 years jail and a public caning.

Andrew Gosling, 47, allegedly tossed a bottle of Italian red from the seventh floor of a Singapore apartment complex about 8.40pm on August 18.

The bottle, allegedly thrown by the Melbourne-born I.T contractor, hit Nasiari Sunee, 73, on the head, as he stood celebrating at a relative’s housewarming party two storeys below.

Gosling, who works as a contractor for tech company Orica, had been charged with what is known locally as the ‘killer-litter crime’.

But that charge was upgraded to the more serious ‘voluntarily causing grievous hurt with an instrument’ over the weekend, meaning if found guilty he now faces not only jail time but also a Muslim-style caning.

Andrew Gosling (centre), 47, allegedly tossed a bottle of Italian red from the seventh floor of a Singapore apartment complex about 8.40pm on August 18, hitting and killing a man who was standing two floors below 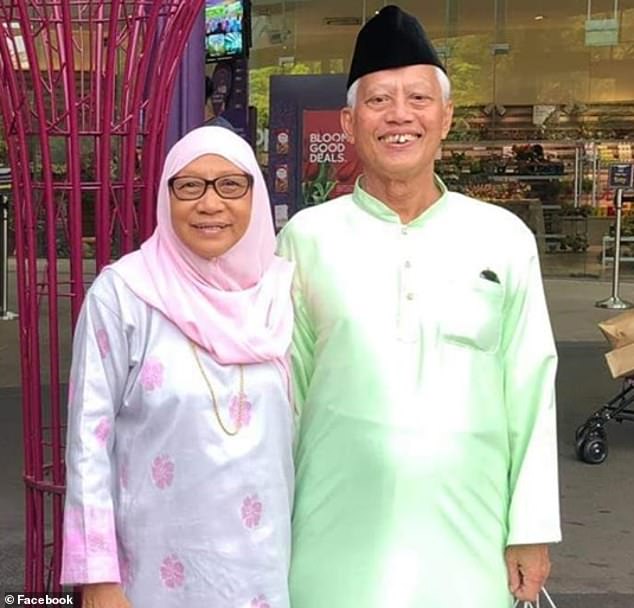 The bottle hit Nasiari Sunee (right), 73, who was at a housewarming party two storeys below. He was rushed to hospital but died of his injuries.

Gosling faced a Singapore court on Saturday where prosecutors claimed in allegedly throwing the bottle he ‘knew it to be likely’ that he would cause grievous harm, The Straits Times reports.

Mr Sunee’s nephew Mohammed Nafis told Daily Mail Australia earlier this month that he wanted Gosling to know his family ‘bear no grudges’ over the tragedy.

The nephew said rejoicing in the man’s arrest and seeking vengeance weren’t the answer, and ‘we best let the law of Singapore … deal with Mr Gosling as it deems (right) for his (rash) act.’

‘We believe that our loss through this incident was very unfortunate to happen,’ Mr Nafis said.

‘But if it was decreed upon us to face such a fate then we should embrace it with lots of love and a high level of maturity as thinking adults.

‘Every living thing will one day move on in life just that nobody knows how ‘they’ will be put to rest.

Singapore police allege Gosling hurled a bottle of Polissena Il Borro sangiovese over the balcony. It’s not yet clear why he allegedly did it. 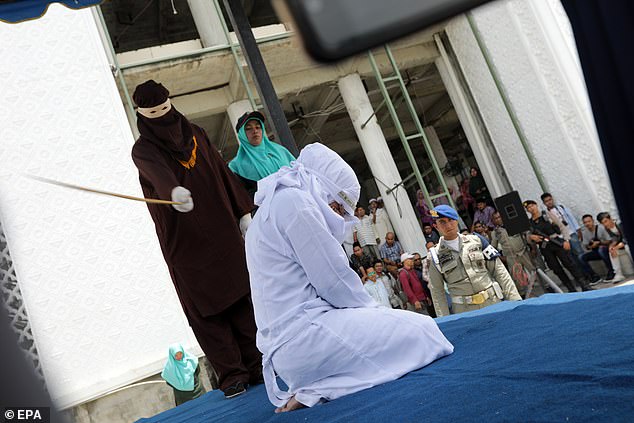 Gosling is facing 15 years jail and a possible public caning, similar to those carried out in Sharia Law nations like Indonesia (pictured), if convicted 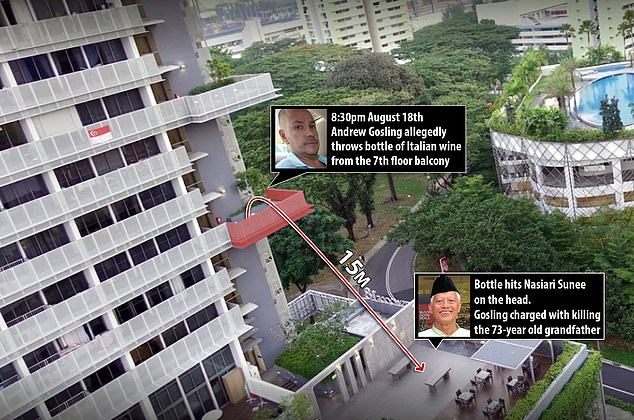 The 47-year-old Australian IT worker allegedly threw the wine bottle from the seventh floor of a 35-storey building – fatally striking grandfather Nasiari Sunee, 73, in the head 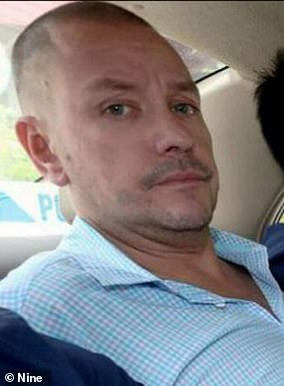 Andrew Gosling is expected to plead guilty to the charge of ‘causing death with a rash act’, his lawyer has said – but she was awaiting confirmation

August 18, 2019: Gosling allegedly hurls a bottle of red wine from the seventh floor balcony of a Singapore high rise at about 8.40pm

Some 15 metres below on the fifth floor terrace, Nasiari Sunee, 73, is celebrating a relative’s housewarming when he is struck in the head.

Mr Sunee is cared for by a party attendee, a nurse, and is then taken to hospital.

August 30: Gosling hands himself in to Singapore Police.

September 17: Gosling next returns to court

Mr Sunee’s daughter said she heard two thuds before turning to find the grandfather lying on the ground, with blood flowing from his head.

He was rushed to hospital but died from his injuries the next day, on August 19.

The wine bottle was found intact on a nearby table and police quickly began going between units fingerprinting residents and grilling witnesses for their recollections.

It was about ten days before Gosling handed himself in to authorities.

He will return to court on October 18.